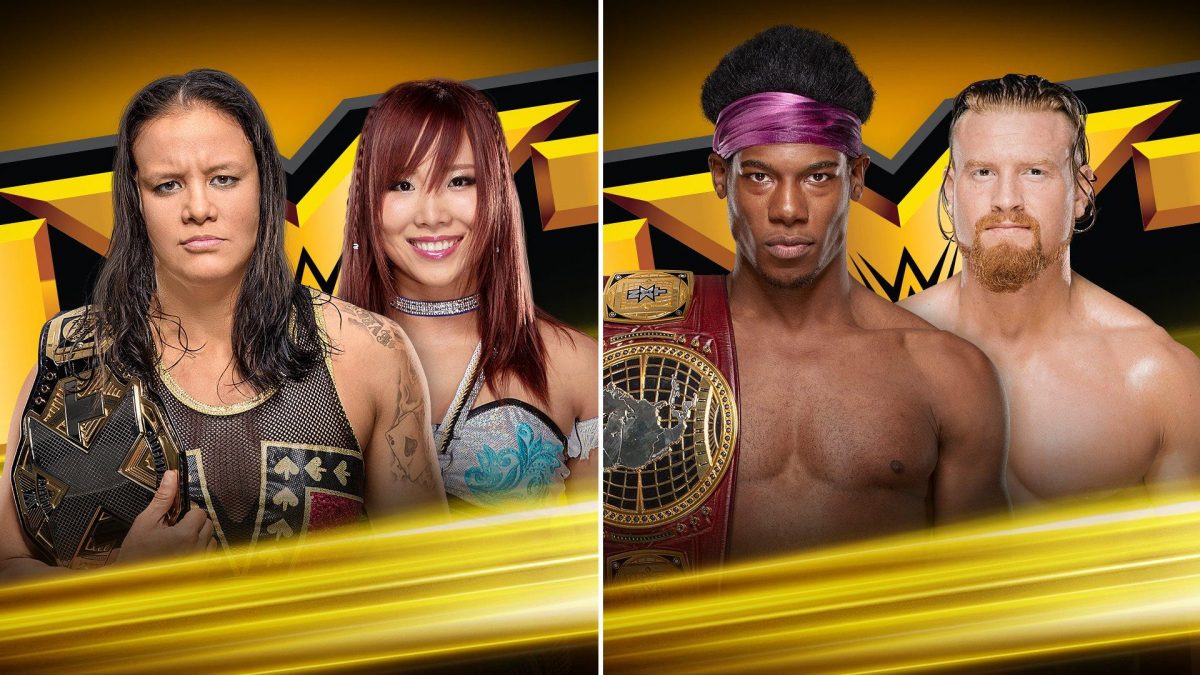 Dream with a drop kick and back elbow. Dream avoids a clothesline and he clotheslines Murphy to the apron. Dream with a springboard double sledge to knock Murphy off the apron and then a double sledge off the turnbuckles to the floor. Dream with a Codebreaker for a near fall. Dream rolls through to get Murphy onto his shoulders but Murphy gets to his feet. Murphy with a kick in the corner followed by a tornado that drops Dream onto the top rope.

Ask and you shall receive.#StreetProfits @MontezFordWWE & @AngeloDawkins are ready to keep on proving that they are Tag Team Championship material! #WWENXT pic.twitter.com/WXbIpVh5HO

Rowe says they heard what you were saying and they went to Mr. Regal. They will see you in the ring next week. Hanson tells them to be careful what you wish for.

Montez and Angelo are happy that they will get to face the War Raiders next week.

NXT Men’s Champion Johnny Gargano makes his way to the ring. Johnny says we have been waiting for this moment for a very very very long time. The last time he was out here, he reminded everyone that he was told no at his NXT tryout. This proves what happens when you take no for an answer. This was a long journey but he is finally Johnny Champion. Takeover was the toughest match of his career but . . .

Adam Cole, Bobby Fish, and Kyle O’Reilly come out and Adam Cole says he is not going to stand here while you have another love fest with the WWE Universe. This is not about not taking no for an answer. It is about you getting lucky. Adam says he beat Johnny in the middle of the ring in New York. If this was any other match, Cole says he would be the NXT Champion. Adam says he hopes Johnny can stand there and pretend with your victory parade, you are an idiot. Adam says he is the uncrowned champion and Johnny is a punk.

Johnny says that Adam is so emotional and he wonders if there is trouble with your boy band? Is there something that is not in sync? You beat him in the first fall, but then he beat Adam two straight. Johnny reminds Adam he made him tap out in the second fall and again in the third fall. The scoreboard read Johnny Gargano 2 and Adam Cole 1. That means that he is the champion. That is not definitive, it is undisputed. Johnny says he would not be out here whining like some spoiled BAY BAY. If the Bay Bay wants to grow a pair, he will have no problem putting more points on that scoreboard.

Adam tells Johnny to be careful what he wishes for.

Johnny waits for Adam to come to the ring and Roderick Strong with a kick out of nowhere. Strong with more kicks and Cole grabs the belt while Fish and Kyle hold Gargano. Cole with a super kick. Officials come to the ring to hold their arms out while The Undisputed Era stand over the champion.

We are back with a look at KUSHIDA’s contract signing and his appearance in the crowd. He will debut in two weeks.

FEAST YOUR EYES, @VelveteenWWE… Because @DijakovicWWE has his sights set on the NXT North American Title! #WWENXT pic.twitter.com/5eHwvbl7cn

Dijakovic with a cyclone kick for the three count.

After the match, Dijakovic takes the mic and he says he is only in NXT because his family gave him that opportunity. They took the opportunity to come to the United States. That spirit is coursing through his veins. His blood drives him to opportunity. I see the North American Championship so feast your eyes Velveteen Dream. 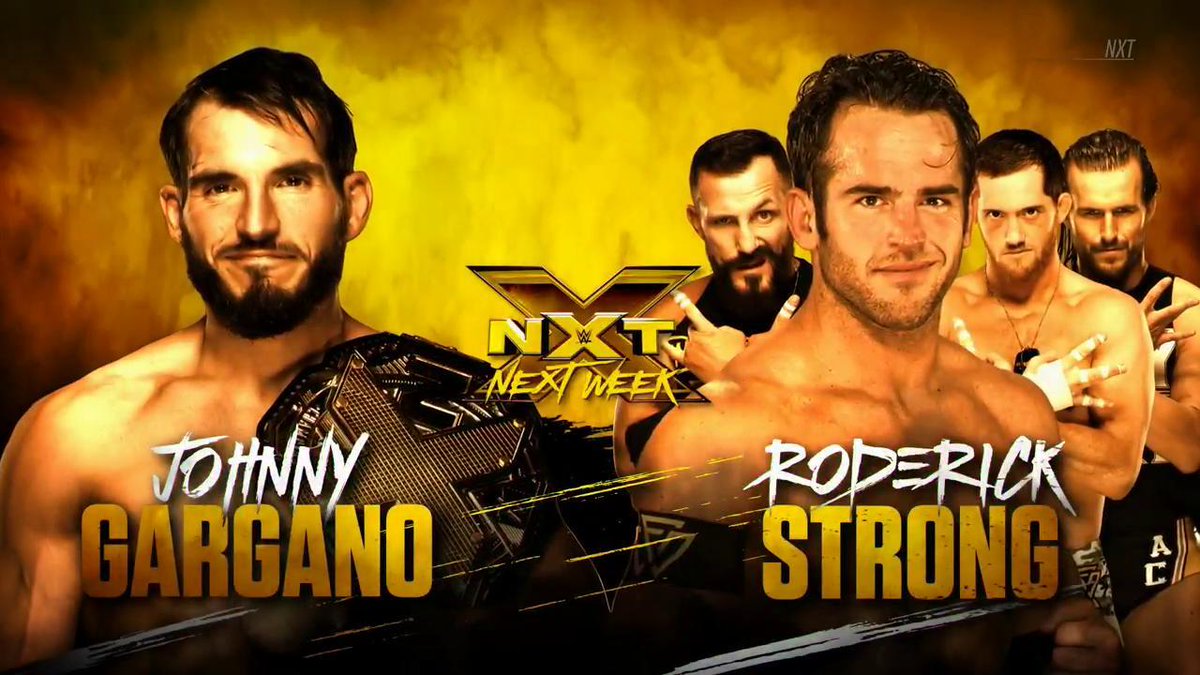 Cathy Kelley is in the back and she asks Undisputed Era if there is any tension. Adam says what you saw was the difference between Adam Cole and Johnny Gargano. Johnny got caught in his trap. They don’t let their emotions . . .

William Regal stops by and Johnny told him he wants to face Undisputed Era. Adam wants to know when he gets to face Johnny Chumpchange. Regal says Johnny wanted to face Roderick Strong and it will happen next week. 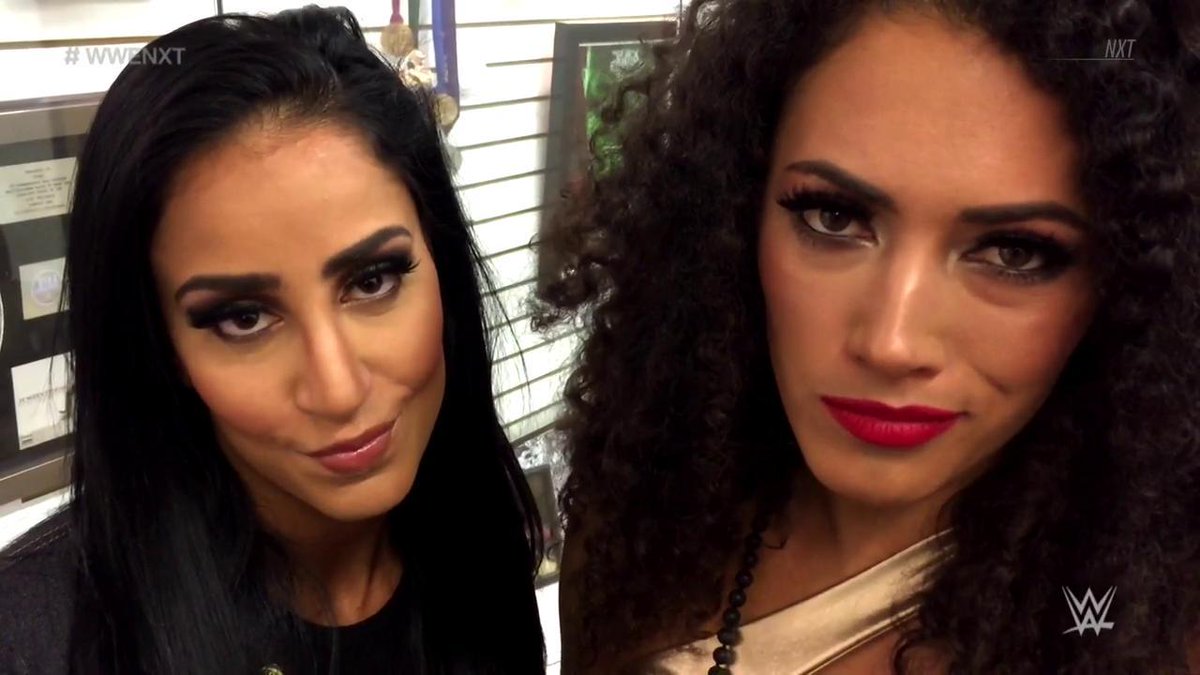 Aliyah and Vanessa Borne are in the back and Aliyah says Candice got lucky and they weren’t ready for the match because they were in New York. Vanessa says they will be ready next week and they tell Candice to find a partner.

If Kairi Sane loses, she won’t get another shot at the NXT Women’s Championship.

Baszler gets a near fall. Shayna goes for the Kirifuda Clutch but Sane with an elbow. Baszler misses a knee in the corner and Sane with a spear. Sane with chops and punches. Sane blocks a kick and hits a dragon screw leg whip and rolling neck breaker. Sane rolls through into the Anchor. Shayna is able to get to the ropes and Sane releases the hold. Sane goes to the turnbuckles for an elbow drop to the back. Sane goes up top but Baszler with a kick to the head. Baszler with a forearm to the back and she sets for a superplex but Shayna’s back does not allow her to hit it.

Baszler hangs from the tree of woe and Sane with a double stomp. Shayna rolls to the floor. Sane misses a forearm off the apron and hits the guardrails. The referee tells Shayna to back off so he can check on Sane but Baszler brings Sane back into the ring and Shayna with an arm bar and she hyper-extends the shoulder. Shayna with a gutwrench gourdbuster for a near fall. Shayna with an Anaconda Vice but Sane gets to the ropes. Sane rolls to the floor and the referee checks on Sane. The referee calls for the medical staff to come out and check on Kairi. Io Shirai makes her way to the ring to check on Kairi.

Shayna grabs Sane and brings her back into the ring. Shayna tries to stomp on the elbow and Shirai attacks Shayna. The referee calls for the bell.

After the match, Shayna sends Shirai to the floor and Duke and Shafir send her into the apron and then hold Shirai while Shayna stomps on Kairi’s elbow.