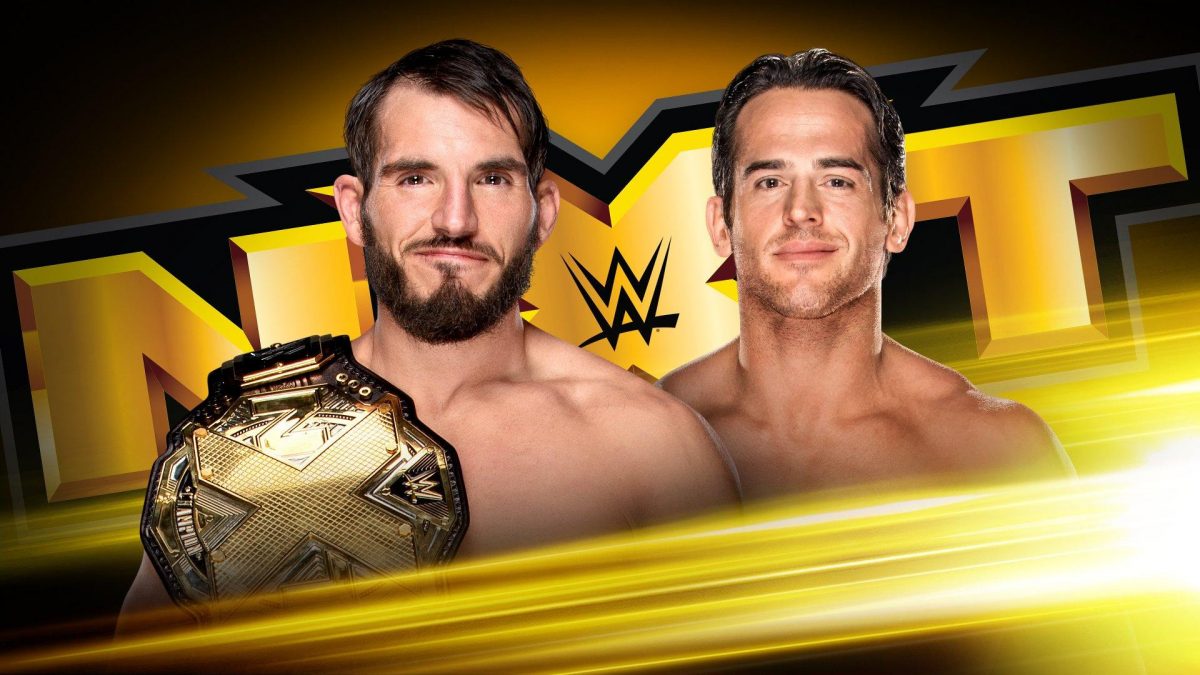 After the match, Ryker drops Carrillo onto the guardrails. Oney Lorcan and Danny Burch come out to make the save for Carrillo. Cutler and Blake do their best to keep Ryker from going after Burch, Lorcan, or Carrillo. 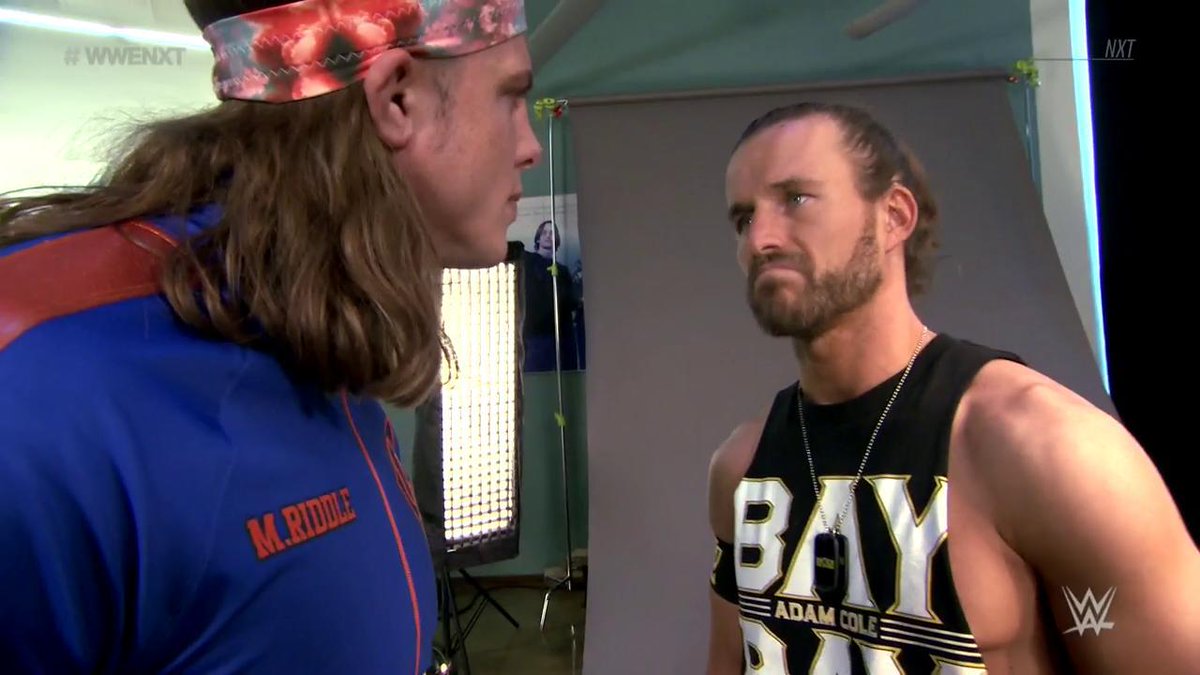 Adam Cole is in the back for a photo shoot. He is asked about the match between Roderick Strong and Johnny Gargano. Adam says he thought Johnny would be man enough to face the leader of the Undisputed Era. Roderick will beat Johnny to a pulp.

Matt Riddle is watching and he tells Adam he is next for a photo shoot. He says he never saw anyone as jealous of Adam for Roderick getting a match. Riddle asks Cole what is he going to do.

Adam says he has better things to deal with as Matt has his photo shoot.

Aliyah and Kacy start things off. Aliyah with a single leg take down and hits a knee drop and handsprings to her feet. Kacy with an Irish whip and clothesline into the corner. Kacy with a slingshot head scissors take down and flip kick but Aliyah pulls Kacy down by the hair. Borne tags in and they hit a double suplex and get a near fall. Vanessa with a forearm to the back and she kicks Kacy in the corner. Borne with a biel.

Aliyah tags in and she kicks Kacy while Borne hits a splash to teh back and they pull Kacy off the ropes. Aliyah gets a near fall. Aliyah stretches Kacy on her knees. Kacy escapes and connects with elbows but Aliyah pulls Kacy by the hair. Borne tags in and they go for a double suplex but Kacy lands on her feet and hits a double neck breaker. Candice tags in and she goes up top and hits a missile drop kick on Borne and a baseball slide to Aliyah. Candice with a slingshot jaw breaker and a running elbow and snap mare. Candice with a step up back senton.

Candice with a suplex and quebrada for the three count.

We see footage from last week when Kairi Sane lost out on her final chance at the NXT Women’s Title due to Io Shirai’s interference.

Cathy Kelley is with Io Shirai and she asks Io about what happened last week. Io says what Shayna did was terrible and she will get Shayna. . .

Marina Shafir and Jessamyn Duke attack Io from behind and then Shayna finishes her off with a kick. 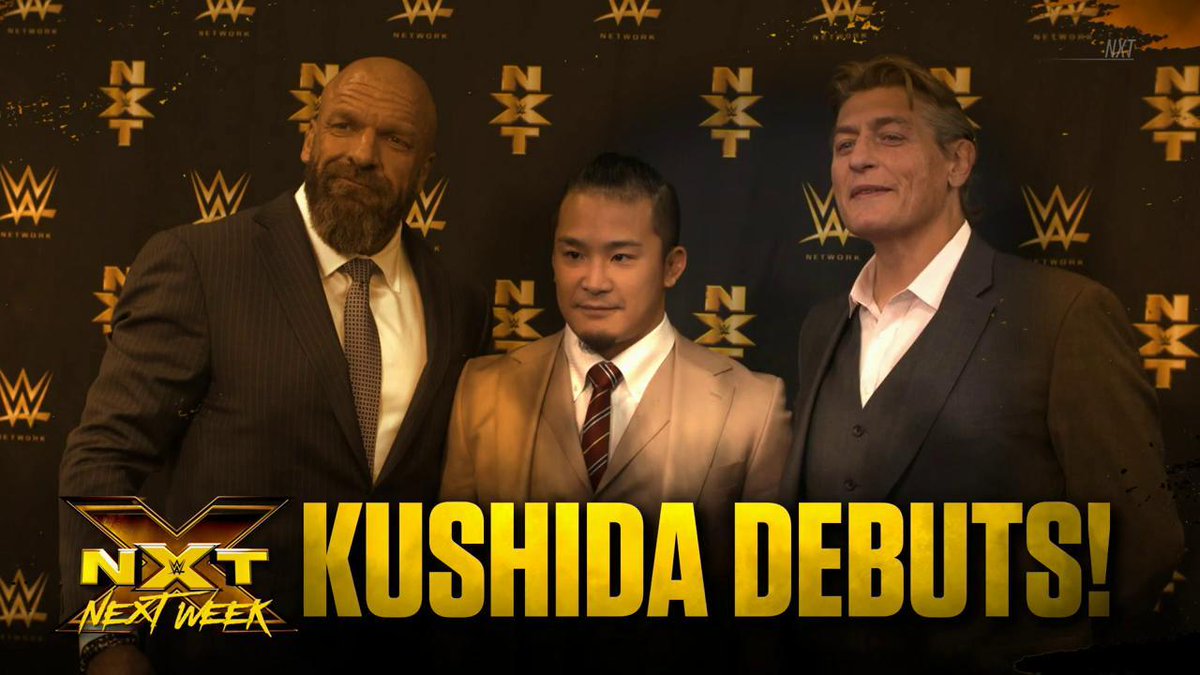 We are back with William Regal talking about KUSHIDA signing with NXT. Regal says he is one of the best competitors. Triple H says KUSHIDA wanted to come into face the best. KUSHDA says he wants to show what he can do. Regal says KUSHIDA will be at the top within a year if he is asked for a prediction.

WIlliam Regal is asked about how excited he is for KUSHIDA’s debut next week. Regal says this is one of the most exciting things in NXT.

Kassius Ohno shows up and William congratulates him on the job he is doing in NXT UK. Ohno says it is humbling to be the guy to teach the young guys the authentic European style. Ohno congratulates Regal on signing KUSHIDA. Ohno asks who on the roster knows the Japanese high flying style better than him? Ohno suggests that he face KUSHIDA next week.

Regal is asked about the match and Regal likes the idea so KUSHIDA will face Kassius Ohno.

The Viking Raiders vs. Street Profits

Ford flies through the air as Hanson and Rowe make their way down the ramp. The referee rings the bell and Dawkins with a spear and spinebuster followed by a frog splash from Ford for a near fall. Dawkins gets Rowe on his shoulders and For misses the double stomp when Rowe moves. Rowe with a forearm and Hanson tags in and punches Dawkins. Hanson with a side slam and cross body. Ford flips over Hanson and Hanson with a cartwheel and clothesline to Ford. Hanson with a knee to Dawkins.

Hanson with an arm bar to Dawkins. Hanson with a knee to the midsection and Rowe tags in and he slams Dawkins. Rowe slams Hanson onto Dawkins. Dawkins with an Irish whip and Rowe floats over. Dawkins with a punch. Ford and Hanson tag in and Ford with clotheslines but Hanson stays on his feet. Ford cannot knock Hanson down on a shoulder tackle or a second one. Ford with a thrust kick and knee but Hanson with a kick. Ford with a drop kick and a delayed belly-to-back suplex followed by a moonsault. Ford clotheslines Rowe over the top rope to the floor. Dawkins and Ford with corkscrew splashes into the corner. Ford with a Shiranui for a near fall from Dawkins.

Mia Yim is asked about Shayna Baszler. Mia says Shayna is unstoppable and look at what she did to Kairi Sane and what she is doing to Io Shirai. Bianca Belair had two chances and she does not look undefeated. MIa says she learned a lot about herself and Shayna when she faced Shayna. Mia wants another chance at Shayna and will prove why she is a threat.

Strong sets for the Strong Hold but Gargano blocks it. Gargano kicks Strong. Gargano tries for the GargaNo Escape and he locks it in and Adam Cole makes his way to the apron and Gargano releases the hold. Gargano with an elbow while Cole berates Gargano. Kyle O’Reilly and Bobby Fish come out but Matt Riddle stops them. Cole with an enzuigiri to Strong and Gargano with a suicide dive onto Cole. Gargano with a slingshot DDT for the three count.

After the match, Cole tries to explain to Strong what happened. Strong does not want to listen to Cole and he leaves the ring.