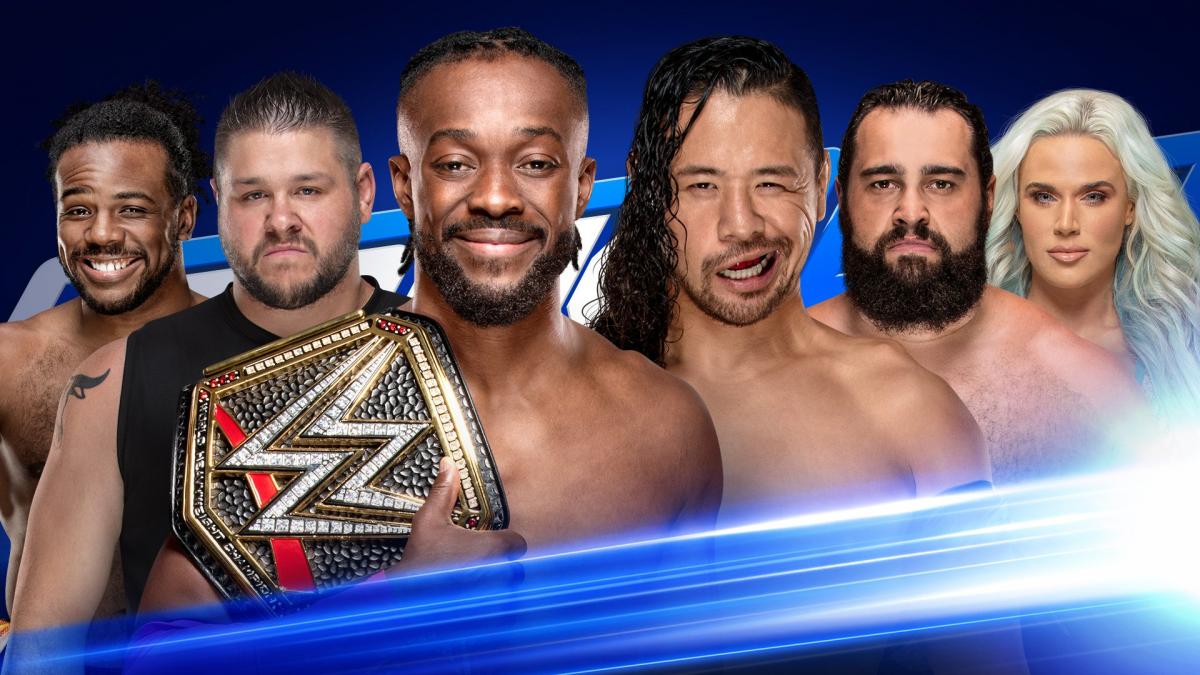 WWE Smackdown Live kicks off with Shane McMahon coming down to the ring. Shane says he doesn’t have a lot of time and he’s not in the best of moods and asks Craig Hamilton to introduce him. Hamilton introduces Shane as the best in the world. Shane says they aren’t here to talk about him tonight. They are out here to talk about Roman Reigns. And specifically what Reigns did to his dad last week. He will roll a bit of footage and he warns the crowd it’s uneasy.

We see the clip of Vince introducing Elias to Smackdown following by Roman Reigns attacking both Vince and Elias. Shane says that was horrific to watch but what kind of man hits another man’s father like that. It’s disgusting. Shane says his father is one of the greatest men to have ever lived. His father is like a natural treasure and when Roman hit him, it was like disgracing the American flag. Shane states that Roman didn’t even strike his father but the chairman and CEO of a billion dollar company. But more importantly, Roman hit his father Vincent Kennedy McMahon and there will be repercussions. Shane asks if he should fine Roman Reigns. If he should suspend Roman Reigns. Or even should Roman Reigns be terminated, fired. But it could be his emotions are getting the best of him. They will settle it right here and right now in the ring.

Shane tells Roman to listen up and to get out here. It’s not a request because he works for him and his family, it’s an order.

Roman’s music hits and he comes down to the ring. Roman throws the microphone away and as does Shane.

Out comes Elias but Reigns hits him first as Shane attacks Roman Reigns from behind. Roman fights back but in comes Elias to attack him. The two beat up on Roman Reigns as Elias hits Roman with the Drift Away.

After commercials, Elias and Shane are backstage and they’re celebrating beating up Roman Reigns.

Kofi is backstage with Xavier Woods and Kevin Owens and he’s asked about his match tonight against Shinsuke Nakamura. Kofi tells Kayla it’s his first singles match since WrestleMania but that love, support and magic from the WWE Universe is still there. He’s the WWE champion and in comes Xavier Woods who tells him to say it again. Kofi repeats himself and says everything is right with the world. He says they got one big chance and that is that Big E is injured. But in the mean time, they got an honorary member of the New Day. We know him as Kevin Owens but they call him Big O as Kevin Owens jumps into the scene.

Owens tells Kofi it’s a big night and he knows he will win. Kevin asks them if they know how he knows that Kofi will win. Kofi says he knows because New Day Rocks.

Backstage, Zelina Vega says that Finn Balor tried to escape from Andrade at the super star shake-up but there’s no escaping him. Andrade says he wants more than just the Intercontinental title, he wants to destroy the myth of Finn Balor.

The bell rings and we are under way. Andrade shoves Balor into the corner and starts with the knees to the face. Balor fights back with knees and punches of his own. Balor grabs Andrade but Vega grabs Andrade by the arms. The referee is distracted by Vega as Andrade kicks Balor to the outside.

Back from commercial, Balor with a DDT. Balor is on the ring apron and kicks Andrade down. Balor climbs the top rope but Andrade trips him. A right hand by Andrade onto Balor who is sitting on the top turnbuckle. Andrade climbs the top rope and a hurricanrana but Balor reverses it into a cover. A two count as Andrade kicks out. Andrade runs to Balor and Balor throws him to the outside. Balor flies over the top rope and onto Andrade. He throws Andrade back into the ring. He goes for the sling blade but Andrade with a back elbow.

Elias is backstage playing the guitar. He sings a song about Smackdown being his. He sings about Roman and how he should face him one on one at Money in the Bank. Because he is money and he is money in the bank. In comes Shane who tells him that was awesome but they have to leave. The two enter a limo and leave the arena.

Billie Kay and Peyton Royce cut a promo mocking Kairi Sane and Asuka. Peyton says she will give Kairi Sane her first loss on Smackdown Live.

The bell rings and we are under way. Peyton throws Sane in the corner and chokes her with her foot. Peyton with kicks but Sane catches her leg and a dragon screw takes Peyton out. A spear by Sane as Peyton is out in the corner. Sane climbs the top rope and the Insane Elbow. She goes for the cover and gets the pin.

Mandy Rose’s music hits and she shows up on the ramp with Sonya Deville as they sarcastically applaud Paige, Asuka and Sane.

Aleister Black is sitting in a dark room. He asks if they know what he is? Because the name and persona are not the same thing. Aleister says that he can’t explain the complexity of his tragic character. And he’s sure that the world that we grew up in would have him condemned.

With Chad walking down to the ring, Lars Sullivan attacks him from behind. He throws Gable into the ring post and gets in the ring. Lars goes after Mahal but Mahal leaves the ring and Lars attacks the Singh Brothers.

Out comes R-Truth to the ring. R-Truth with elbows to Lars and he goes for a kick but Lars catches him and drops him into the canvas. Lars with a power bomb.

Roman Reigns is backstage and Kayla asks him about the challenge by Elias for Money in the Bank. Roman accepts his challenge.

Charlotte says the only injustice that Becky talks of is that she holds the Smackdown title and she didn’t beat her. And she thinks that she’s the one in Becky’s head. Because when Lacey Evans is knocking her out on Raw, all she sees is Charlotte Flair. It’s all over Twitter and in all of her promos. Becky says she’s in her head? Becky says since it all started, she beat her but yet Charlotte has been on her worst ever winning streak. Charlotte says that Becky is scared because her days are numbered. She has everything to lose and Charlotte has nothing to lose.

After she fights Lacey at Money in the Bank, she is next in line. What she wants is for her to clear the way for Bayley, Mickie James, Ember Moon because she wants new challenges. But she is the web that management will not untangle her from. Charlotte said she has done it 8 times and will do it 9 times.

Bayley’s music hits as she walks down the ramp. Bayley says the shake-up is supposed to be about fresh starts but all she sees is a re-run. She says she can count the amount of times Becky beat her and that is zero. Charlotte tells Bayley to get in the back of the line because it’s still her show. Bayley tells Flair to earn a title shot. She challenges Charlotte to a match.

The winner of this match earns a future title opportunity.

The bell rings and we are under way. Lots of reversals early on which ends with Charlotte on the outside of the ring. Bayley runs towards Charlotte and a drop kick through the bottom rope. Bayley throws Flair into the ring. Bayley with a cross body. She goes for the cover but Charlotte kicks out. A spinning back elbow by Bayley as Charlotte counters with a neck breaker. Flair with a right hand but a roll-up by Bayley. A two count as Flair kicks out. A drop kick by Bayley followed by a spear into the corner. Bayley foes for a spinning elbow but Flair reverses it into a right hand. Flair attacking the knee as she drives her leg into the back of Bayley’s knee.

Nakamura goes for a kick but Kofi with a double stomp to the chest. Kofi with the SOS. He goes for the cover but Rusev breaks it up as the referee calls for the bell.

Xavier Woods and Kevin Owens get in the ring and throw Rusev and Nakamura to the outside. Woods flies over the top rope onto Rusev. Nakamura attacks Xavier. Nakamura gets in the ring but Trouble in Paradise by Kofi onto Nakamura.