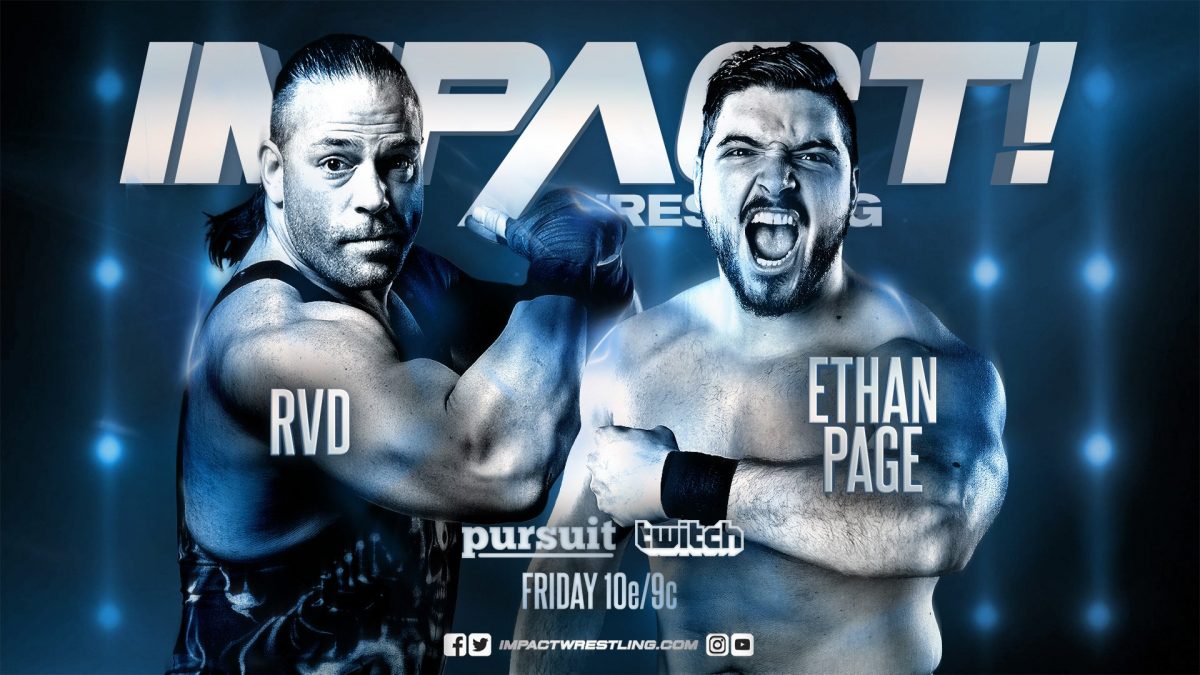 May 10, 2019
Toronto, ON – Rebel Entertainment Complex
Results by ImpactWrestling.com

Moose dropkicks Ortiz off the top, sending him crashing to the floor. Alexander continues to wear down Ortiz as he prevents him from tagging in Santana. Ortiz hits a modified cutter to turn it around and get the hot tag to Santana! Santana goes on the attack, taking it to Alexander. Moose trips him up but Ortiz takes out Moose to keep the momentum rolling! Moose catches Santana in mid-air and connects with a powerbomb, followed by Go to Hell for a near fall. Moose accidentally hits his partner with a big boot, allowing LAX to gain control. They hit Alexander with a flurry of double team offense to win.

Tessa Blanchard joins Josh Mathews and Don Callis on commentary for the following match. Taya hits a clubbing blow to take control in the early going. Madison connects with a cutter for a two count. Taya hits a vicious sidewalk slam to regain control. Madison locks in a half Boston crab, causing Taya to quickly tap out for the win!

Rosemary challenges Su Yung to a Demon Collar Match next week from Philadelphia!

Grace sends Alexia flying with a giant swing. Alexia attempts a German suplex but can’t get Grace up! Grace follows up with a modified Blue Thunder Bomb. Grace hits the Grace Driver to score the dominant victory.

Backstage before the match, Josh Alexander assures Ethan Page that he will be in his corner tonight.

The brawl spills outside in the opening moments of the match. Page charges at Van Dam but he avoids it and sends Page crashing into Alexander! Page trips up Van Dam on the apron, allowing him to take control. Van Dam turns the tide with a series of kicks, followed by his signature Rolling Thunder! Van Dam hits the Five Star Frog Splash to win!

We get an injury update on new World Champion Brian Cage. The future seems unclear after he suffered the most painful injury of his career.

Michael Elgin and Johnny Impact argue over who sent Brian Cage to the hospital at Rebellion.

Desi Hit Squad vs. The Deaners vs. Brent Banks & Aiden Prince vs. The Rascalz

Prince jumps off the second rope and hits Raj with a Hurricanrana. Cousin Jake takes out both members of the Desi Hit Squad with numerous clotheslines. The Deaners hit a modified double team Spinebuster on Rohit but everyone breaks up the count. The Rascalz send each other into the corner for huge dropkicks! Wentz launches himself off the back of Dez and hits a splash to the floor! Dez is next to fly as he connects with a cartwheel dive to the outside. Back in the ring, Rohit rolls up Cody with a hold of his belt to score the shocking victory!

Tag Team Champions LAX hang out with the Rascalz in the backstage area.

Tommy Dreamer gets his team ready for the main event with a heart-felt speech.

oVe Rules means there are no disqualifications, no countouts and anything goes! The first pinfall or submission will decide it!

Dreamer is looking to fly in the early going but Dave cuts him off. Dave takes to the skies himself with a Moonsault off the top rope to the floor! Fallah is next to fly with a dive through the ropes! Dreamer gets another opportunity to fly and does just that with a cannonball to the outside. Fulton hits Dreamer with a sidewalk slam onto a ladder. Jake hits Willie with a tornado DDT into a pile of steel chairs for a two count. Fulton powerbombs Fallah through two steel chairs. Then, Fulton places a barbed wire steel chair on Fallah’s chair and Crist stomps it into him for a near fall! Swann connects with a handspring cutter on Dave. Jake takes Swann off the top of a ladder with a huge cutter but Fallah breaks up the pin! Fulton jumps off the ladder but Fallah reverses in mid-air to hit a Samoan Drop. The violence picks up when Dreamer brings out the building blocks and spills them across the mat. Callihan hits Willie with the Cactus Special Piledriver into the building blocks to win.