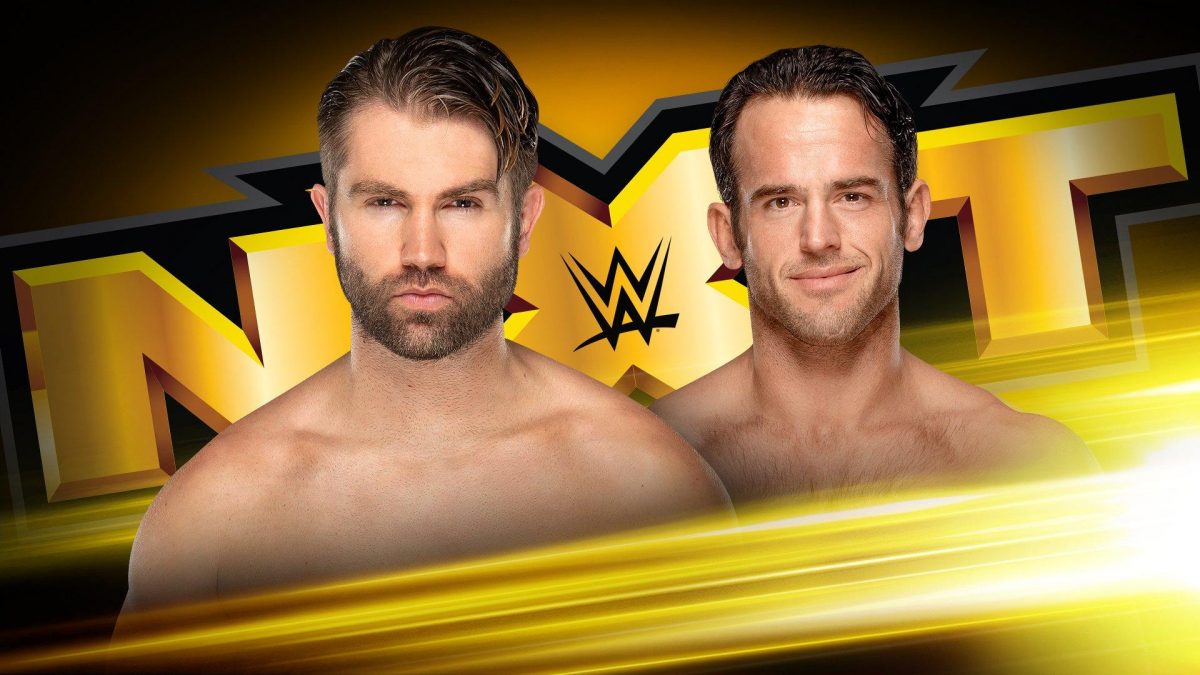 Aliyah avoids Mia when Mia wants to lock up. Aliyah tries to taunt Mia but Mia with a waist lock and take down into a front face lock, Aliyah with a reversal and she floats over and connects with forearms to the back. Mia with a shoulder tackle and she has something to say to Aliyah. Mia pushes Aliyah down when she tries to get up. Mia grabs the leg and misses an enzuigiri. Mia with a drop kick and she misses a cannonball when Vanessa pulls Aliyah out of the way. Aliyah pulls Mia into the ring post and gets a near fall. Aliyah with a kick to the head and a clothesline for a near fall. Aliyah with a kick to the back. Aliyah with a knee drop and she lands on her feet with a handspring. Mia gets her boot up and then she applies a tarantula.

Aliyah with an enzuigiri for a near fall. Aliyah stretches Mia over her knees and applies a chin lock. Aliyah kicks Mia away. Aliyah misses a knee drop when Mia moves. Aliyah is sent into the turnbuckles and Mia with a cannonball. Mia with a clothesline and kicks. Mia with an overhead belly-to-belly throw and Aliyah goes to the floor. Vanessa checks on her friend and Mia with a suicide dive onto Vanessa and Aliyah. Mia rolls Aliyah back into the ring and Mia catches Aliyah and hits a fallaway slam. Mia with Protect Ya Neck for the three count.

After the match, Mia sends Vanessa into the ring steps. 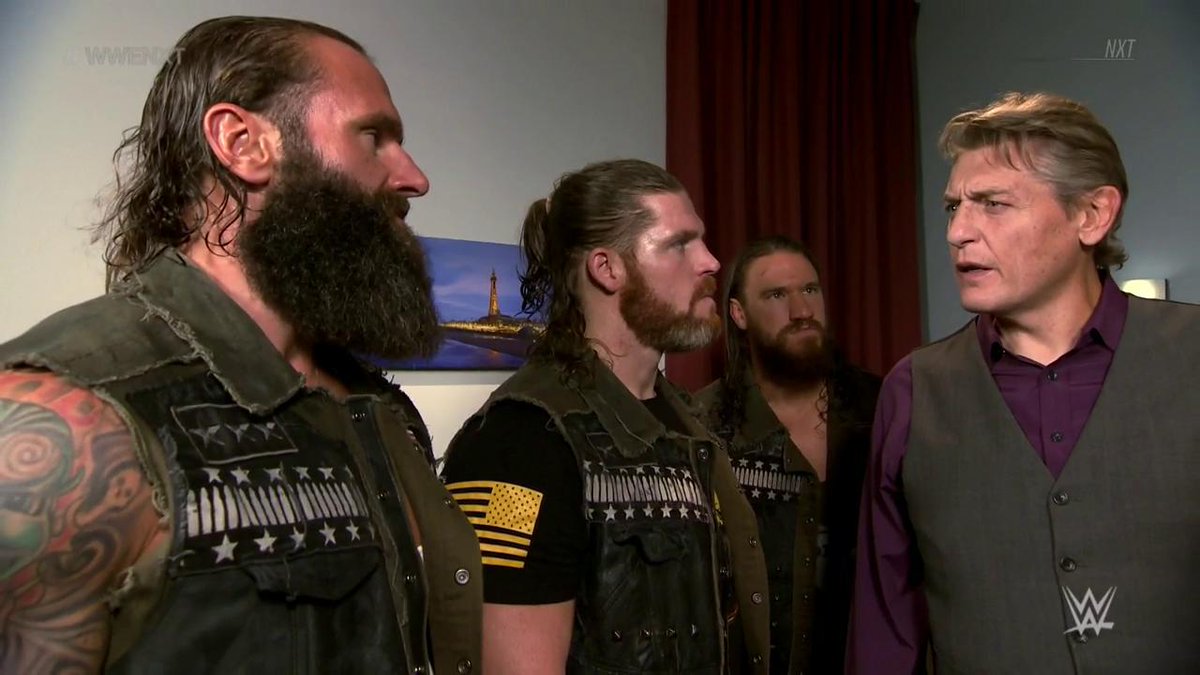 We take a look at what happened during and after the Women’s Title Match from last week.

Cathy Kelley is with William Regal for an update on Candice LeRae. William says Io did some dreadful things to Io.

The Forgotten Sons come in and wonder how the Street Profits can make title matches. Steve tells Regal to do his damn job. William says they had an opportunity and for some reason, you decided to get yourselves disqualified. Therefore, you go to the back of the queue. Wesley does not like being disrespected. Jaxson says they will not forget this.

Cathy asks if he has a team in mind for the Street Profits and William says he was talking to the street Profits and they had a suggestion that they should face Danny Burch and Oney Lorcan. We will see that match next week.

We go to the Adam Cole BayBay Championship Celebration Tour Week 2. Adam is checking with Roddy on whether he made the order. He arrives at Gargano’s restaurant in Cleveland.

Adam enters and sees Johnny’s father. He says he is glad to meet him and he has four pizzas to pick up. Adam looks around the restaurant and he says they are for a lot of hungry wrestlers. Adam puts an autographed photo on the wall and he says it was a pleasure to meet Frank. Adam says he loves the Wall of Fame. Frank sees what Adam did to it and takes Adam’s photo down.

Adam drives away and we see Adam arriving at the AIW training facility. He says he came in peace and he brought some pizzas. He wants a minute of their time. Adam says he knows you all love and respect Johnny Gargano. What isn’t to love? The hard work, passion, and sacrifice. Adam says he knows that Johnny came in here and told you if you work hard you can succeed. If you work really hard, you can become NXT Champion. Adam says Johnny is full of crap. Johnny got lucky and anybody can get lucky once. Adam says he watched when Johnny showed up at the school and Adam says it made him sad. Adam says Johnny even let you hold the championship to give you some false sense of security that you could be champions. Look at you guys? Twan, do you think you could become NXT Champion? Adam tells Twan not to kid himself. Adam says he tells everyone to take a pizza, sit on the couch, and give up.

Another opponent for @KUSHIDA_0904 to simply DOMINATE… #WWENXT pic.twitter.com/MbPGheb1GQ

We see Tyler Breeze in the back and he is asked for some comments about his return to NXT and how some of the current stars feel the success of the brand is due to them. Tyler says he is thinking about Undisputed Era. They all talk about the same thing. They talk about power and how they run this brand. Tyler says he is going to show that this was NXBreeze before they even showed up.

We have a video for Killian Dain.

Isaiah Scott says Swerve is confidence. He puts that into everything he does in the ring and in the Performance Center. His advantage is his confidence. The winner of this tournament will have their career changed.

Cameron Grimes says at 25 he can look dead in your eyes and say that he is the best wrestler in the world. He has proven that over the last 11 years. Cameron Grimes is the only one ready for this chance.

Scott with a knee to the head but Grimes with a flipping cross body and a double stomp for the three count.

We just watched it…. we just GIF'd it… we still can't believe it…

Belair is not impressed with her opponent. Zuniga pushes back and Belair with a forearm and she continues with forearms to the back. Belair sends Zuniga into the turnbuckles and follows with a biel. Belair with a running shoulder into the corner. Belair presses Zuniga over her head and does some squats while Zuniga is over hear head and then Belair drops Zuniga behind her. Belair runs into a boot from Zunga and Zuniga goes for a head scissors but Belair blocks it and hits a power bomb and then power bombs Zuniga another time and then drops Zuniga face first onto the turnbuckles. Belair with the KOD for the three count.

We have a video from Matt Riddle talking about how he does not want to be one dimensional so he trains in other fighting disciplines. Everyone tells Matt that he is too pretty and shouldn’t fight. Matt talks about being in UFC and now being in NXT. He says people are intimidated. He talks about training and getting stronger.

Breeze with a drop kick and Strong sends Breeze to the floor through the ropes. Strong goes for a drop kick through the ropes but Breeze moves and Tyler punches Strong and sends Roderick into the apron. Breeze punches Strong and sends him into the apron. Strong falls over the ring steps but Strong picks up Breeze and drops Breeze on the edge of the ring steps. Strong with a back drop driver onto the guardrails and they return to the ring. Strong kicks Breeze when they return to the ring. Strong with a forearm followed by a kick to the back. Breeze with forearms to the back followed by punches . Strong with a drop kick and he gets a near fall. Strong with a surfboard and he pulls on Breeze with a chin lock as he stretches Tyler. Breeze with an elbow to escape. Strong runs Breeze into the turnbuckles.

Kyle O’Reilly and Bobby Fish make their way to the ring and Breeze super kicks Fish off the apron. Strong with an enzuigiri followed by End of Heartache for the three count.