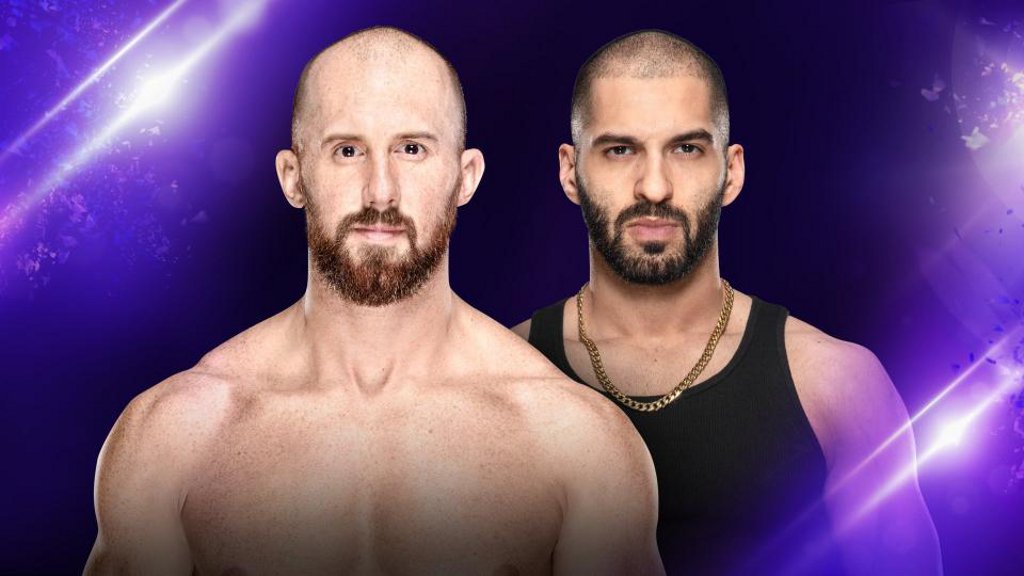 Daivari attacks Lorcan and then Drake Maverick and referees separate them.

We see Brian Kendrick bring interrupted by the Singhs. Samir says Brian hasn’t accomplished much, but he is getting a lifetime achievement award for what he has done. Brian wants to know who he faces first.

Sunil wants to dance with Kendrick but Kendrick is not in the mood to dance tonight. Kendrick with a forearm and kick to Sunil. Kendrick with forearms. Brian does some dancing to mock Sunil and then Kendrick with a back body drop and drop kick. Sunil goes to the floor. Samir distracts Brian and Sunil hits Brian and Irish whips Brian over the ring steps. They return to the ring and Sunil gets a near fall. Sunil with elbow drops and then he does more dancing. Sunil chokes Kendrick in the corner. Sunil with a chop. Sunil chokes Brian in the ropes and then Samir with a punch when Sunil distracts the referee. Sunil sends Kendrick to the floor and then they come back into the ring and Sunil gets a near fall.

Kendrick with elbows but Sunil with a back breaker. Sunil goes to the turnbuckles and misses an elbow drop. Kendrick with punches followed by an Irish whip and leg lariat. Kendrick with a clothesline and boot to Sunil. Kendrick escapes a suplex and Kendrick with the Captain’s Hook and Sunil taps out.

After the match, Samir attacks Kendrick and then Akira Tozawa comes to the ring and he takes care of Samir and Sunil.

We go to part one of three for Humberto Carrillo. He says he remembers watching wrestling as a child. They used to watch Mexican wrestling and it was amazing. Moving to the US was tough because he had his family in Mexico, but it is just him. He gets support from his father and grandfather. They tell him the sacrifices they made for him is why he is where Humberto is today.

Drake sends an official and referee to send Kanellis away.

Justin with a rollup for a near fall. Gallagher with a running head butt for the three count.

A fine? FINE.@RealMikeBennett can't wait to get back in @WWEMaverick's ring on #205Live next week, and that could be VERY bad news for his opponent. pic.twitter.com/MMvS7dYLNh

Mike says Drake does not know what he is going through. Drake has ruined his life. Mike says it is only fair that he ruins Drake’s show. Drake says he is General Manager and he sympathizes with Mike and he says he will fine Mike.

Mike talks about how unbelievable it is when he has another mouth to feed. You are the GM and you do what you have to do. Next week, he will be competing in your ring on your show and he cannot wait to see how much of a fine he will get for what he does in Drake’s ring.

They brawl on the ramp before the match officially starts. Lorcan with a clothesline and he sends Daivari over the top rope to the floor. Lorcan sends Daivari into the ring steps and Lorcan gets chairs from under the ring and throws them into the ring. Lorcan with a running hip to Daivari followed by a second one. Lorcan grabs a chair and sets it down in the ring. Daivari sends Lorcan over the top rope to the floor. Daivari sends Lorcan into the announce table. Daivari gets a trash can but Lorcan kicks Daivari before Ariya can use it. Lorcan with a suplex on the floor.

The referee checks on Daivari before Lorcan continues his attack. Lorcan sets up chairs on the floor. Lorcan hits Daivari with the trash can lid and Lorcan gets more chairs. Daivari kicks Lorcan and hits Lorcan in the back with the trash can lid. Lorcan blocks a suplex onto the chairs and Lorcan sets for a power bomb off the steps onto the chairs but Daivari with a back drop that sends Lorcan through the chairs. Daivari sends Lorcan back into the ring. Daivari sets up the ladder and puts Lorcan in position for a splash off the top of the ladder and he hits it for a near fall. Daivari with kicks to Lorcan and Daivari gets another table and brings it into the ring but the leg breaks before it is set up. Daivari gets another table and sets it up in the ring.

We take a look at the two men battling for the Cruiserweight Title at Extreme Rules.

Tony says him and Drew were close at the start of 205 Live. They traveled together and had a plan together. Drew says Tony was his friend and someone he trusted. Tony could not help him build a better 205 Live because Tony could not do it. Drew says he was superior. Tony says Drew’s better 205 Live was all about him, not about making the product better. Tony says Drew thought that would get him to the top. Drew says that Tony is concerned about eight things, his abs. Drew says Tony only cares about himself.

Tony says to be seen as a serious contender, he had to beat Drew. Drew says the winner of their match would go on to win the title at Wrestlemania. Tony says winning the Cruiserweight Title was the biggest moment of his career. Tony says it was the stamp of approval for all of his hard work. Drew says Tony robbed him of his Wrestlemania moment. Drew says he was all alone and no one was there to help him. Drew says he needed to focus and train harder. He was going to bring pain and punishment to whoever is across the ring from him. Drew says nothing was going to stop him from winning the title at Stomping Ground.

Tony says Drew got jealous. Until Drew pins the man who was champion, Tony does not see Drew as the champion. Drew says the title belt means he is Cruiserweight Champion.