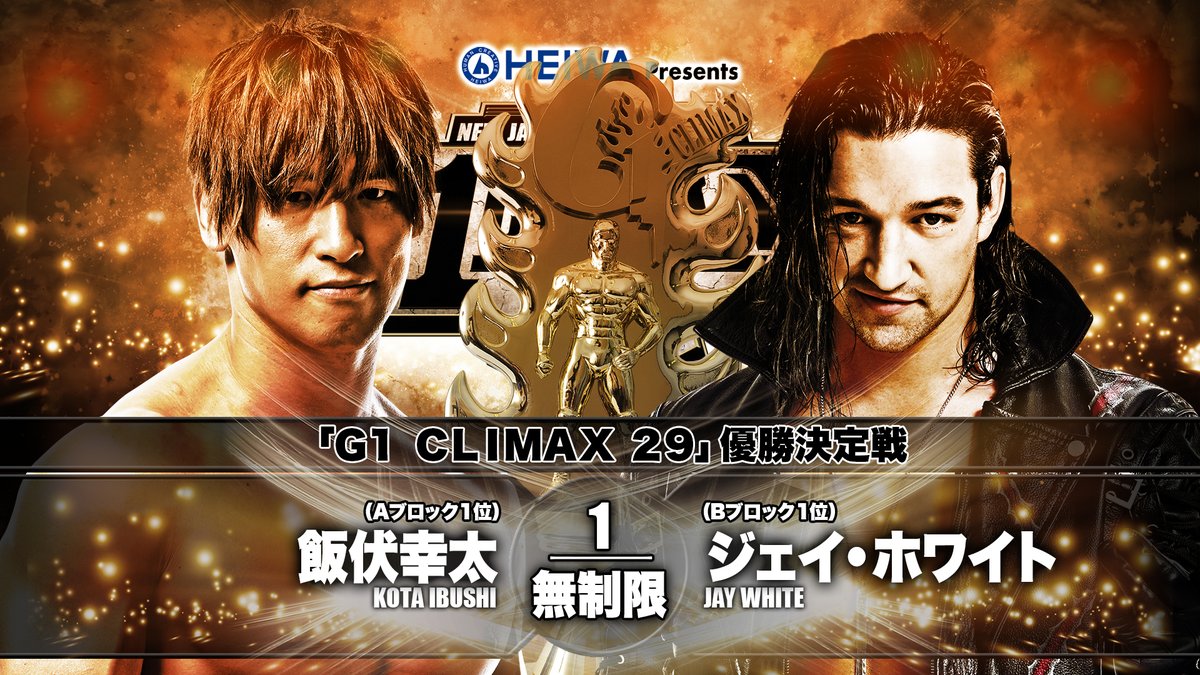 They’re playing up a rivalry between the Japanese dojo students and the Los Angeles dojo students. This played into that story. A fun, different opener.

Connors submitted Tsuji with a crab after what was nearly a squash match.

After the closing bell, they all continued to brawl.

The crowd was hot for this, as they loved seeing Liger. The match was paint-by-numbers, with not much standing out.

Taichi attempted to unmask Liger and Tiger. Tiger came back with kicks, and hit a Tiger Driver for a nearfall.

Archer and Cobb tagged in and did some big man spots, the highlight being Archer hitting a pounce on Cobb.

Suzuki-gun continued to dominate the proceedings until Kanemaru got in. Kanemaru tried for Deep Impact, but Cobb caught him, and hit a release belly-to-belly. Cobb followed with a Tour of the Islands on Kanemaru, and got the pin.

They didn’t get much time. Ishimori and Owens worked over Roppongi 3K at the outset. Owens worked especially well with the lads.

Ospreay got a tag and made a comeback against Yujiro. SHO and YOH hit stereo cope con giro’s to the floor, taking out Owens and Ishimori.

The finish saw Ospreay hit Storm Breaker on Yujiro for the pin. They strongly put over on commentary that Ospreay had just beaten another heavyweight.

Not much to the match. Henare pinned Umino with a Toa Bottom.

The real highlight here was the post-match. Moxley and Juice had a staredown in the ring. Juice went to leave, and Moxley hit him with the U.S. title belt.

Moxley set up a table. He said Juice looks like he belongs in a 1990s jazzercise class and he’s going to toughen him up.

The early part of the match was built around Taguchi comedy. He sold his ass after a series of missed hip attacks.

Honma missed a kokeshi, of course. Goto tagged in and made a comeback for his team. Honma tagged back in, and SANADA cut him off.

SANADA hit a TKO for a two count. He followed up with a backbreaker, then hit a moonsault for the pin on Honma.

LIJ shared their traditional fist bump after the match. EVIL participated as well, which he had not done since just before the G1.

This just screamed “angle alert”. And what an angle it was. KENTA joined Bullet Club, and Katsuyori Shibata did physicality in a strong angle.

YOSHI-HASHI and Fale began. YH hit a headhunter. Tama Tonga tried to cut him off from the apron, but Fale accidentally hit him instead. Fale made his own comeback, and Bullet Club worked YH over in their corner.

YH finally managed to tag Ishii after an extended beatdown. Fale took Ishii down with a shoulder tackle, and Bullet Club then went to work on Ishii. Ishii fought off a gun stun from Tonga, then hit a suplex on Loa.

Ishii went to tag KENTA. KENTA jumped off the apron, leaving Ishii hanging. Tonga hit a frog splash on Ishii for a nearfall.

YH jumped in to save Ishii, but ate a sloppy gun stun. Tonga went for a gun stun on Ishii, but Ishii turned it into a powerslam.

Fale tried to save Tonga, but Ishii hit him with a brainbuster. KENTA entered and hit Ishii with a running knee. Tonga then covered Ishii for the pin.

YH and the L.A. Dojo boys jumped in to save Ishii from an extended beatdown, but Bullet Club sent them outside.

As KENTA posed in the ring, Katsuyori Shibata jumped in. Shibata hit a series of strikes, then a delayed dropkick in the corner on KENTA.

Bullet Club ganged up on Shibata in the ring. KENTA hit a PK on Shibata, and sat on top of him in Shibata’s pose. KENTA threw up the too sweet hand signal, and joined Bullet Club.

Shibata walked to the back under his own power. Wow.

A very good match. This also sets Suzuki up for an IWGP title match in the near future, perhaps in London at Royal Quest on August 31.

Okada and Tanahashi hit some tandem offense, including a back elbow to Sabre. Suzuki jumped in and slapped an armbar on Okada over the ropes, while Sabre simultaneously got a flying armbar on Tanahashi.

Suzuki and Okada brawled on the outside, while Sabre worked over Tanahashi’s right arm in the ring. Suzuki sent Okada into the barricade, taking him out of action for a bit. Suzuki and Sabre used quick tags in their corner, continuing to attack Tanahashi’s limbs. Okada jumped back on the apron, but Suzuki sent him to the floor with a running boot.

Tanahashi came back with a dragon screw on Sabre, then managed to tag Okada. Okada hit a back elbow in the corner, a DDT, a slam, then went up top. Sabre rolled out of the way of an elbow, and Okada rolled through on landing.

Okada went for an air raid crash, but Sabre blocked it with an octopus. Sabre tagged Suzuki, who hit a PK for a nearfall, then a running boot to Okada. Suzuki went for a kimura. Tanahashi jumped in for the save, but Suzuki no-sold his offense, then sent him outside.

Tanahashi hit Sabre with slaps. Sabre got the octopus hold, but Tanahashi slid out. Tanahashi hit Twist and Shout, then a slingblade. He covered, but Suzuki made the save.

Okada and Suzuki fought to the floor. Tana went for High Fly Flow, but Sabre got his knees up, then tried for an armbar. Tanahashi bridged into a cover for a nearfall, but Sabre came back with a PK.

Okada and Suzuki got tags. Okada hit a shotgun dropkick, then a top rope elbow. Okada hit his Rainmaker pose. He went for the Rainmaker, but Suzuki elbowed out of the attempt.

Suzuki and Okada exchanged forearm strikes. Okada missed on a dropkick, and Suzuki hit a PK. Suzuki applied a rear naked choke. He tried to transition to a piledriver, but Tanahashi saved with a slingblade.

Tanahashi sent Sabre outside with a slingblade, then hit a pescado. Okada hit Suzuki with a dropkick to the back. Suzuki avoided another dropkick, then used La Mistica. Incredible.

Tanahashi jumped in for the save, but Sabre took him out with a flying guillotine.

Suzuki used a rear naked choke, then hit Okada with the Gotch-style piledriver for the pin.

Suzuki cut a promo after the match. He told Okada that he lost to a guy that wasn’t allowed in the G1. Suzuki told Okada to hand over the IWGP belt to him.

Okada was helped to the back with his title. Suzuki said NJPW can’t escape him, and that Suzuki-gun is ichiban.

This was an all-time great match. The bar was set ridiculously high over the last five weeks, and these guys had to absolutely tear the house down to meet that standard. They did, and then some. What a match.

The entire Bullet Club came to the ring with White. Red Shoes ejected them from ringside before the opening bell. Gedo bargained with Red Shoes, who allowed him to stay.

Gedo tried to trip Ibushi shortly after the opening bell, so Red Shoes ejected him as well.

Ibushi hit a dropkick, and White rolled outside. Ibushi teased a Golden Triangle off the post, but White pushed him into the post, then went to work on Ibushi’s bad ankle on the floor.

Back inside, White hit a double underhook suplex into the turnbuckle. Ibushi went for a snap hurricanrana, but his ankle gave out. He got the rana on his second try, but continued selling his ankle.

Ibushi hit a powerslam, then a moonsault. He followed up with a flurry of kicks, then hit a standing moonsault. He went for a backflip kneedrop, but White rolled to safety, and Ibushi continued selling his legs.

White hit a Blade Buster for a two count. He went for his TTO submission, but Ibushi kicked him off at the 10 minute mark.

Ibushi hit a double stomp to the back. White hit a flatliner, then a German suplex. White hit a superplex. He went for a kiwi krusher, but Ibushi blocked it. Ibushi hit a spike package driver.

White came back with a uranage, then used a kiwi krusher for a nearfall at the 15 minute mark.

Ibushi teased lawn-darting White into the turnbuckle. White slipped out, then shoved Ibushi into Red Shoes. Red Shoes took a bump, then rolled to the floor.

White hit a low blow. Gedo came back to the ring, and slid a chair in. Gedo held Ibushi’s leg while White hit it with a chair. Gedo rolled outside, and White hit an inverted dragon screw. Gedo revived the referee and rolled him back in.

White applied the TTO. After a long struggle, Ibushi reached the bottom rope for a break at the 20 minute mark.

White tried for a sleeper suplex, but Ibushi hit a backflip kick. Ibushi lawn-darted White into the buckle. White rolled to the apron, and Ibushi hit a deadlift German off the second rope into the ring.

Ibushi hit a lariat, then used a Last Ride for a two count at the 25 minute mark.

Ibushi called for a bomaye. White dropped to the mat before Ibushi could hit the move, playing possum. White took the referee. Gedo jumped in with brass knuckles. Ibushi ducked the knucks, then kicked Gedo.

White hit a sleeper suplex. Ibushi no-sold it, then hit a Bomaye. Red Shoes called Rocky Romero from the commentary table to pull Gedo out of the ring. Ibushi hit a second Bomaye for a nearfall.

White grabbed Ibushi’s wrists. He teased a Kamigoye or a cross-armed brainbuster, but Ibushi hit a headbutt to the chest, cutting him off.

Ibushi hit a straightjacket German He went for a Kamigoye, but White blocked and hit a sleeper suplex. White hit a second sleeper suplex, dropping Ibushi on his head.

Winner: Kota Ibushi via Pinfall to become winner of the G1 Climax 29 tournament.

Harold Meij presented Ibusho with a flag and the G1 trophy. Ibushi posed for a couple of minutes, then cut a promo.

Ibushi said this G1 has been the most important month of his life. Ibushi said he made the finals last year, but one year later, he won. He said he could not be happier than he is right now.

He said that he was able to win thanks to the efforts of all 20 men in the tournament.

Ibushi said that all together, we are going to tear up the wrestling world. He said a new era in NJPW starts today. He thanked everyone, and said he’ll see everyone at next year’s G1.