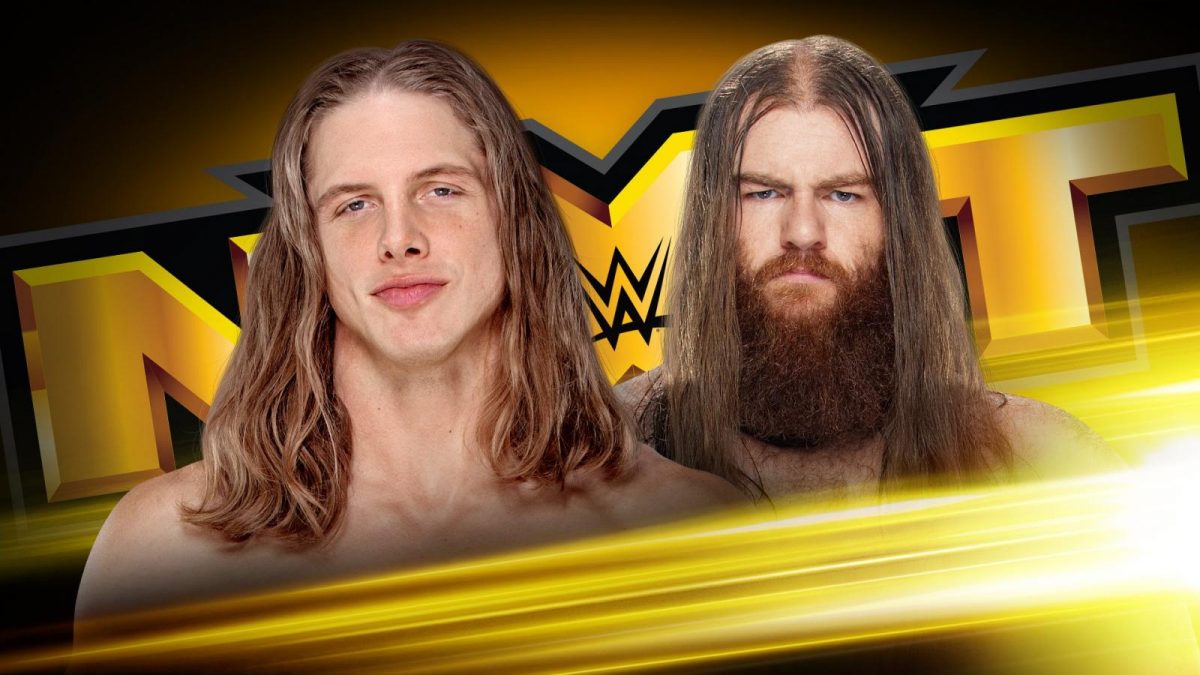 No matter what @AdamColePro says, we think @GoGoMyles hears the champ LOUD and CLEAR.

The NXT Men’s Champion, Adam Cole makes his way to the ring with his fellow Undisputed Era members.

Adam says that he did everything he said he would. He beat Johnny Gargano at Takeover and he successfully defended his NXT Championship. Adam says people are saying that he had the performance of a lifetime and now it is no longer a question, he is the greatest NXT champion who has ever lived. Adam wants to give everyone an example. If there was an NXT Mount Rushmore, you wouldn’t see the faces of Johnny Gargano, Tommaso Ciampa, Shinsuke Nakamura, or Finn Balor. It would have Adam Cole’s face four times.

Roderick stays all four of them should be standing here draped in gold. The Undisputed Prophecy has yet to be fulfilled. They got screwed. Roderick says they are going to cut to the chase. Velveteen Dream, you did not pin me, you pinned Pete Dunne. Your North American Championship title run is on borrowed time. As soon as you quit ducking him, Roderick says he will fulfill his part of the prophecy.

Kyle O’Reilly says in order to win a tag team match, you have to pin the right man. Kyle presents Exhibit A when Bobby Fish made the tag during Takeover. Kyle says he may not have a ‘law degree’, but he rests his csse. Bobby says it is clear to anyone with a working set of eyes, they did not lose to the Street Profits. Bobby tells the silly prat William Regal to come out and make this right.

Adam wants them to make it right. The Undisputed Era draped in gold is what is right. Kyle and Bobby, you are the greatest tag team in NXT History and it is a matter of time before you regain the titles. Adam tells Roddy that the North American title has his name on it. Adam says they are two steps from their prophecy and from running this place. They are two steps from making this place undisputed.

As they make their way up the ramp, Jordan Myles makes his way to the stage with his contract.

Adam calls a time out and he says Jordan must be joking if he thinks he is going to use his title opportunity on the NXT Championship. If you make the mistake of challenging him, Adam says he will knock that smile off his face. Why not challenge Shayna Baszler. What about going to NXT UK or 205 Live to challenge their champions? They are not on the same level as Adam Cole. Adam decided to speak slowly since Jordan does not appear to be listening. There is nothing more detrimental to a young wrestler’s career than to challenge him for the title. Adam says if you challenge him, he will make your career an undisputed failure.

Jordan hands the contract to Adam and then he drops it in front of Adam.

We go to comments from Bronson Reed. He says it was one of the biggest opportunities of his career. Bronson says he wants more because he is the King of Australian Strong Style.

Shane Thorne shows up and he tells Bronson he was given a chance and he blew it. Shane says that Bronson has wasted everyone’s time. Bronson challenges Shane to a match and Shane accepts.

NXT Women’s Champion Shayna Baszler’s music plays and she makes her way to the stage and she has something to say. Shayna tells Mia that she is badass. You fought her and took her to places nobody else has been able to. Shayna says she saw it in Mia’s eyes. You have had to go to some dark places. Shayna says she got to thinking. They don’t have to stand across from each other like enemies. You can stand right beside her . . .

Marina and Jessamyn get on the apron. Shayna says it is nice and warm under the dragon’s wing. She wants to know what does Mia have to say.

Mia looks around and she goes after Duke and Marina kicks Mia. Marina with a take down and Shayna with kicks. Shayna with punches to Mia. Officials come to the ring to try to pull Shayna and Marina off Mia. 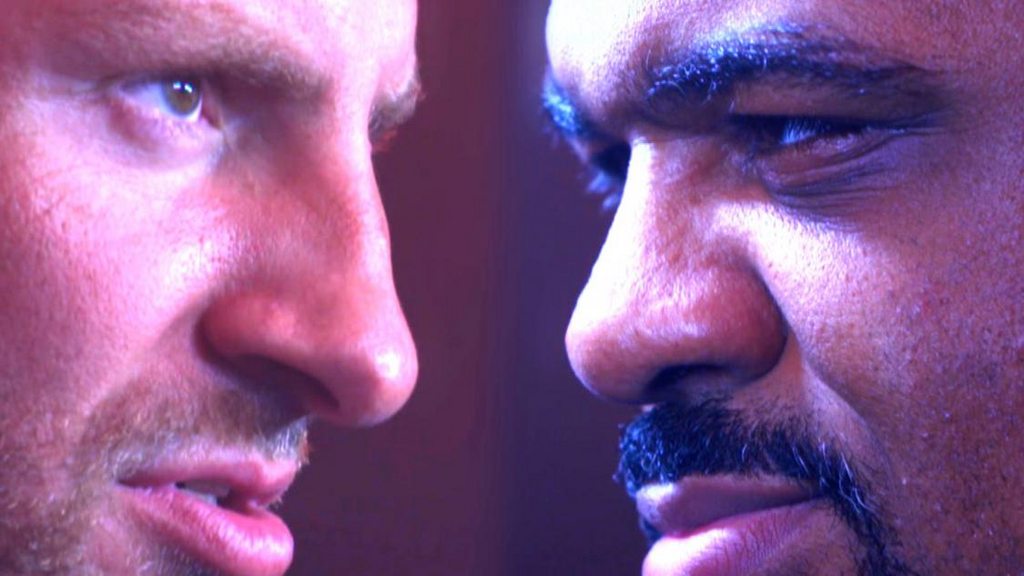 We are back with a look at Keith Lee and Dominic Dijakovic and that match will take place next week. Keith says the Universe has seen nothing yet. Dominic says they are two monsters who do anything. Keith says you don’t see people like them doing this. Dominic mentions that his last match before signing with NXT was against Keith and then he shows up. Dominic says Keith has been around for ten, but Dominic has only been here for five. What has he done during those other five years. Dominic says Keith is here because of Dijakovic.

Thorne with a kick before locking up. Thorne with another kick and Thorne backs into the corner and goes to the floor to avoid Reed. Thorne returns to the ring and Reed blocks a kick and takes Thorne to the mat. Reed sits on Thorne’s back and applies an arm bar. Thorne sends Reed into the turnbuckles and connects with kicks. Thorne with an arm bar. Reed catches Thorne on a leap frog and hits a sit out spinebuster. Reed with a running boot to the head. Reed presses Thorne over his head but Thorne with a rake of the eyes followed by a clip. Thorne with forearms and kicks.

Thorne falls to the floor and Reed follows. Reed grabs Thorne and sends Thorne back into the ring. Reed goes up top but Thorne knocks Reed off the turnbuckles and Thorne with a running boot for the three count. 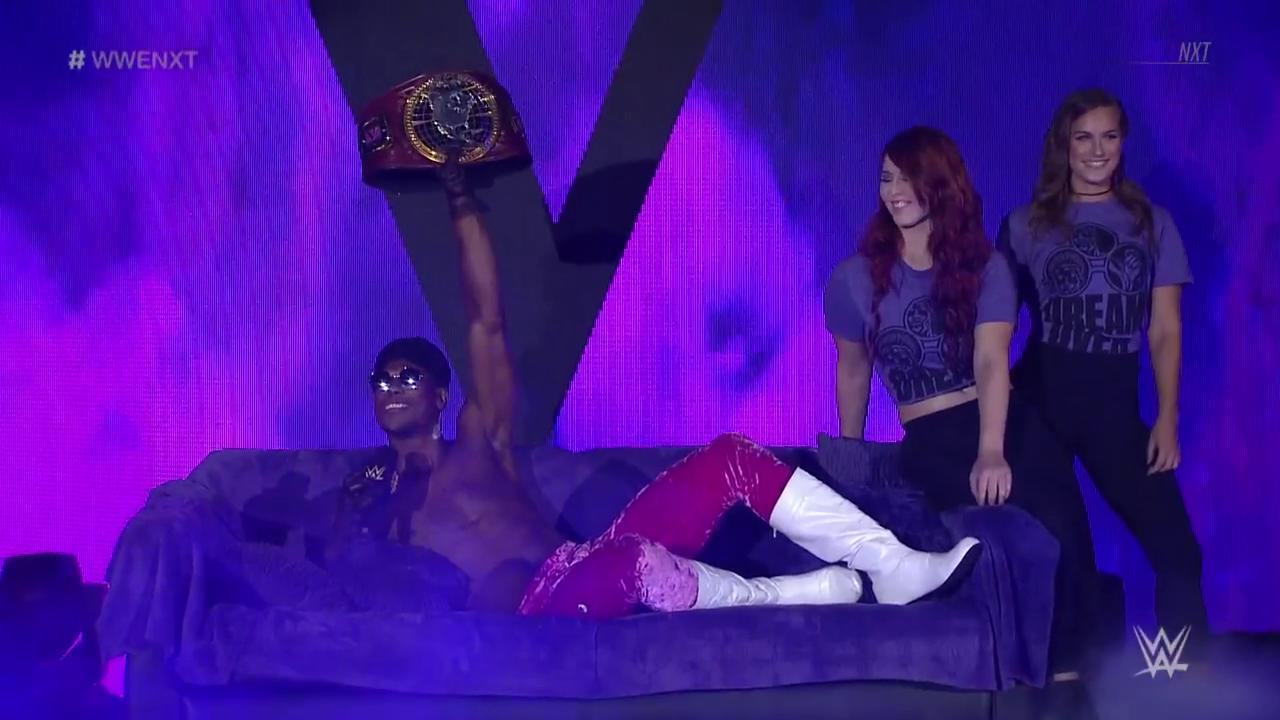 Velveteen Dream makes his way onto the stage pulled on the sofa by a few assistants.

Dream shows his t-shirt and he tells everyone that it is $30. He says his shades are $10. The Dream retaining the North American Championship by pinning Pete Dunne . . . priceless. Dream says one man, two men, the entire locker room, the Dream always ends up on top because the Dream likes it on top. That is where the spotlight is.

Roderick Strong, the spotlight is on you. If you want to face the Dream one on one, you will have to show the Dream why you belong. You better do it fast because it will be Dream Over. 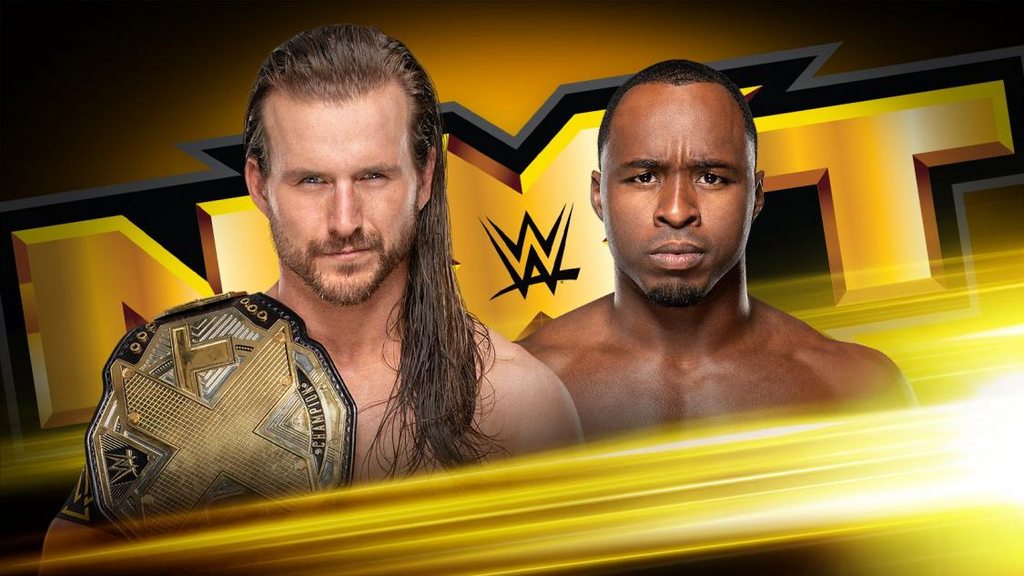 We are back and we are told that in two weeks, Jordan Myles will face Adam Cole for the NXT Championship.

Next week, The Undisputed Era get another shot at the NXT Tag Titles against The Street Profits.

Riddle attacks Dain from behind as Matt enters the ring through the crowd.

Riddle chases after Dain on the ramp and applies a choke as we go to credits.