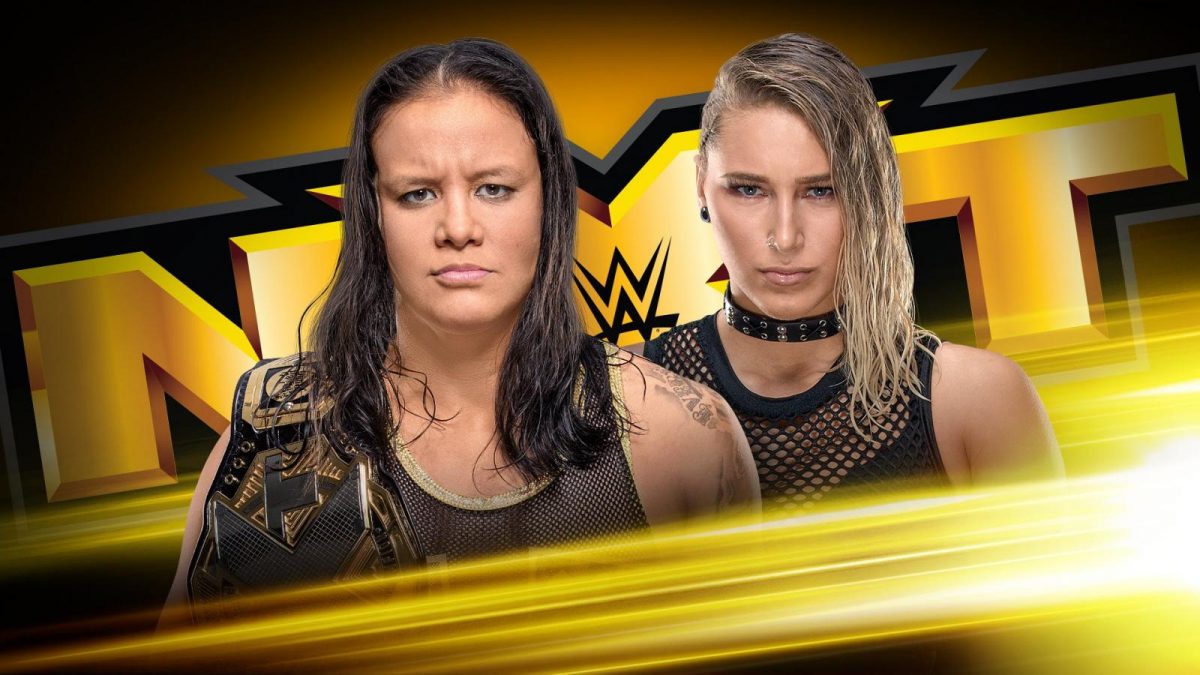 We see a vehicle arrive at Full Sail and Rhea Ripley emerges. She enters the building. 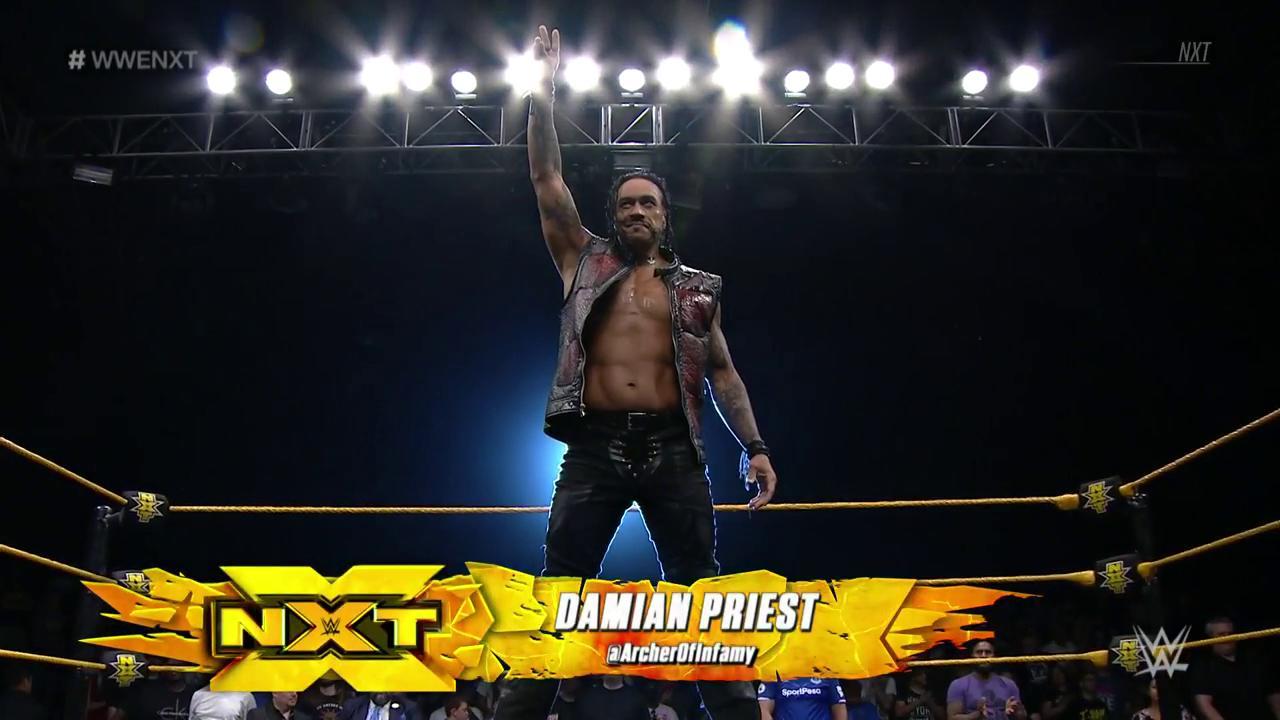 Priest with a discus clothesline and then he sets for the cyclone kick and hits it. Priest with The Reckoning for the three count. 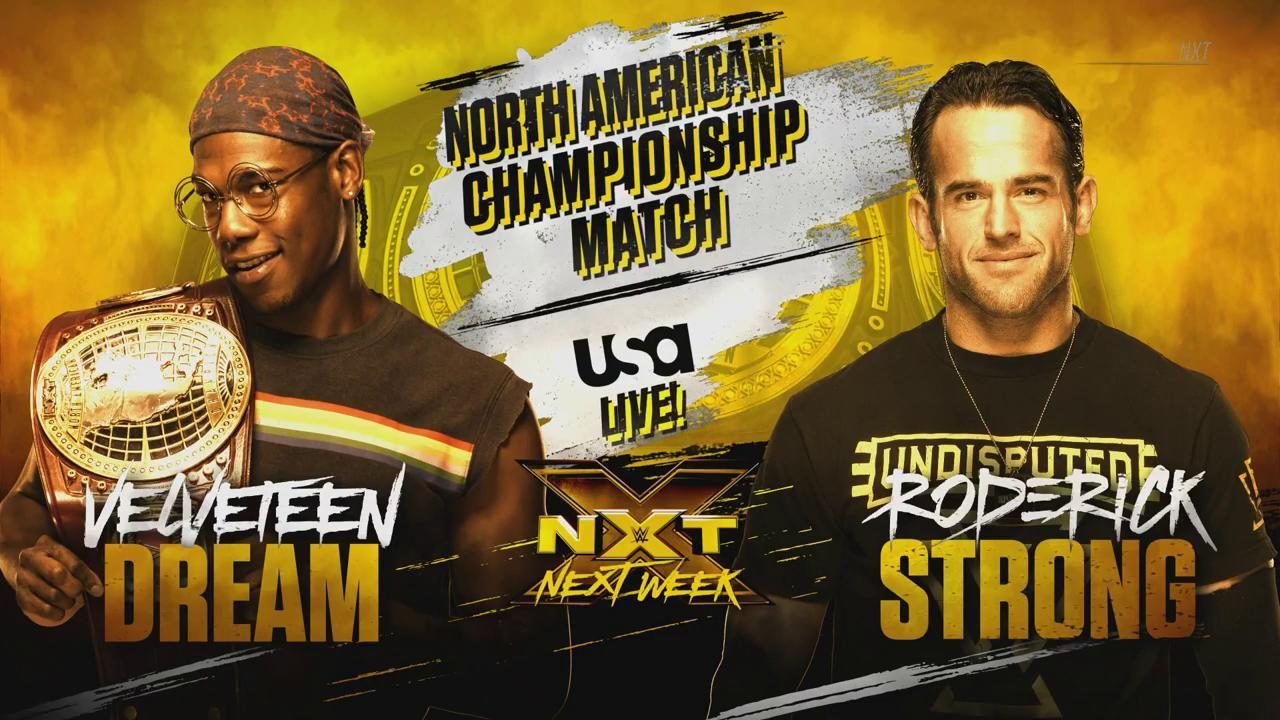 We have a recap of what happened last week when Roderick Strong set the Velveteen Dream’s couch on fire. Dream asks if you think for one second that his championship is going up in flames, you are lying to yourself. Strong asks Dream if he thinks he can beat him. Dream says he has a message for Roderick Strong. Dream says if he burns, you will burn with him.

Next week, we will see Roderick Strong face Velveteen Dream for the North American Championship on USA Network during the first hour of NXT.

Johnny Gargano makes his way to the ring. Johnny lets the crowd chant for him for a few minutes before starting to speak. Johnny says he wasn’t going to be very long when he came out here tonight. He says he asked if he could come out to talk because he heard the rumors and read the reports. Everyone has asked him what the future holds for Johnny Gargano. Last time he was in the ring, he fell 20 feet in a steel cage. He woke up to an arena of people chanting ‘Thank You Johnny’. Johnny says he appreciates that. Johnny says he wanted to come out and say thank you. There would be no Johnny Wrestling if it wasn’t for you guys. Johnny says this with all bit of his heart. He absolutely loves everything about NXT.

Shane Thorne interrupts Johnny and makes his way to the stage. Shane asks if all of this is necessary? More time for Johnny, just what we all needed. Shane says we have wasted more time on you. You could have taken a selfie and put out a tweet, but Johnny had to be here. Shane gets into the ring. He tells Johnny that he gets it. You are a pillar of NXT. You are Johnny Takeover. Shane tells Johnny this place is going to be just fine without you. In fact, with the right person finally in the spotlight, it is going to be even better. Shane tells Johnny to take his bell and take a walk.

Johnny starts to walk out of the ring but Johnny stops at the ropes and tells Shane he is right. He says he is NXT and he isn’t going anywhere. Gargano with a super kick to Thorne.

We have a video feature on the Forgotten Sons. They say they have been cast out and cast aside. The world gets to see their vulgar display of savagery. They will be forgotten no more.

Garza tells Dunne to wait a second but Dunne sees the outstretched hand and goes for it but Garza pulls it away. Garza goes for the pants but Dunne with a single leg take down into an ankle pick. Garza with a waist lock and Dunne with a wrist lock. Dunne picks up Garza by the wrist and takes him to the mat. Dunne goes for the other hand and he pulls back the fingers. Dunne gets a near fall. Garza with a single leg take down and Garza works on the arm. Dunne with a head scissors and Garza escapes. Garza with a side head lock and he lands on his feet on a back body drop. Dunne with a clothesline. Dunne kicks the arm and then puts the hand on the mat and tries to stomp the elbow but Garza avoids it.

Garza goes to the ropes and tries for a quebrada but Dunne moves and applies the Triangle and he hyperextends the fingers and gets Garza to tap out. 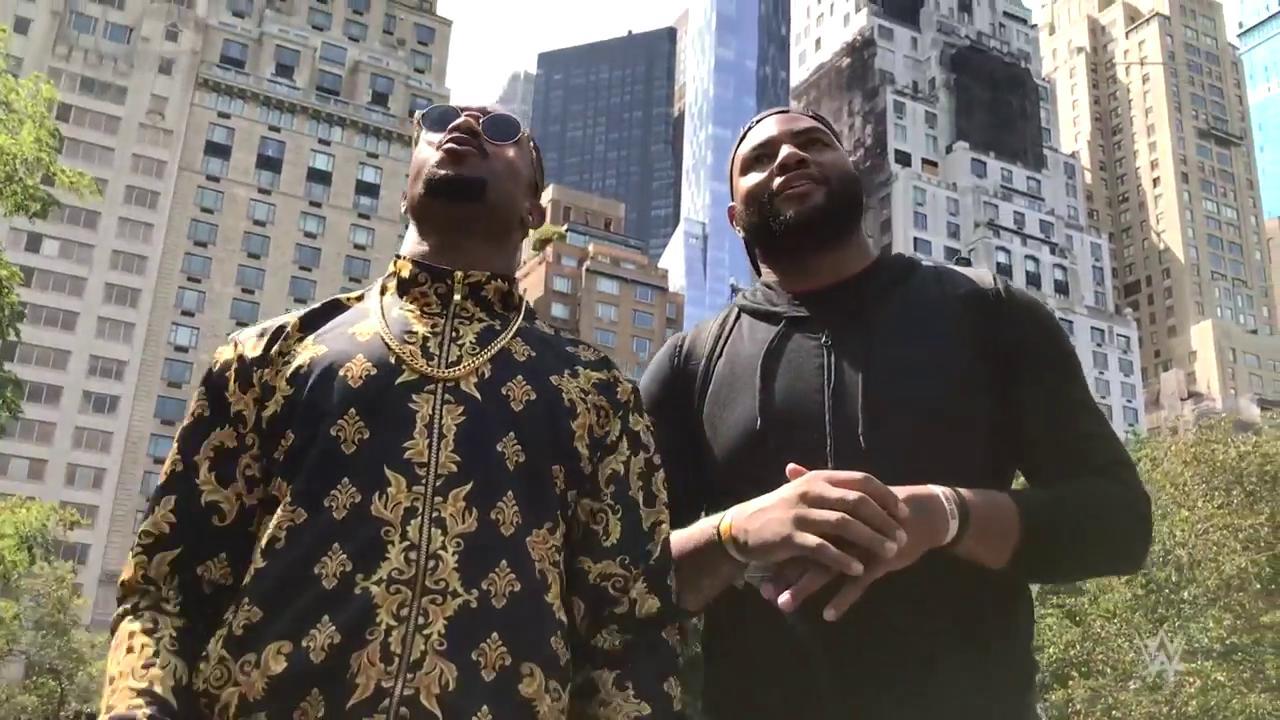 We see the Street Profits talking about smelling fresh air in Central Park. This is what happiness and success means. They talk about going to Madison Square Garden to be on Raw. Montez says it is historic and precious. Angelo says there is one thing they are missing. He says it isn’t the same without the tag team championships. Angelo says it would have been outrageous to be in New York with the titles. It is something the smoke couldn’t handle.

Montez talks about making a statement on the live NXT on USA Network to try to take back their tag titles. Angelo likes that plan. 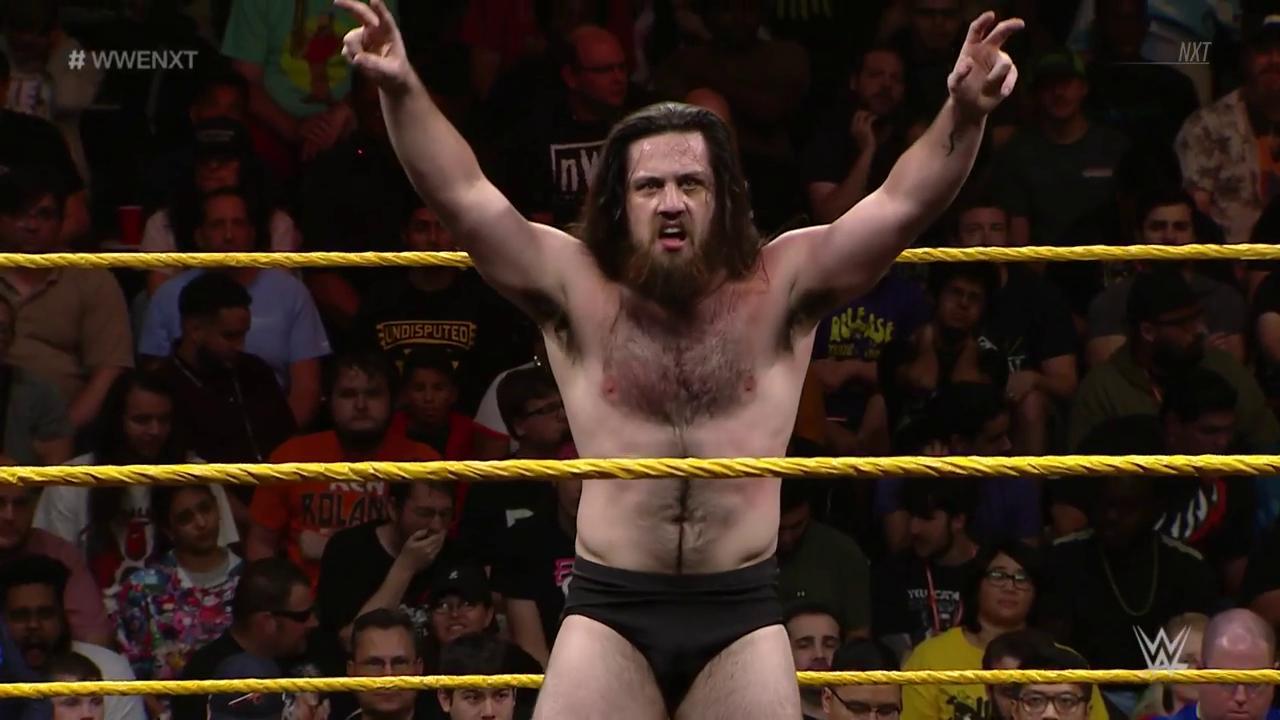 Grimes pulls the rope into Mendoza’s face. Grimes has a kick blocked and Mendoza with forearms and an enzuigiri. Grimes sends Mendoza to the apron. Mendoza with a kick and he goes up top for a Phoenix Splash but he misses. Grimes with a running double stomp for the three count. 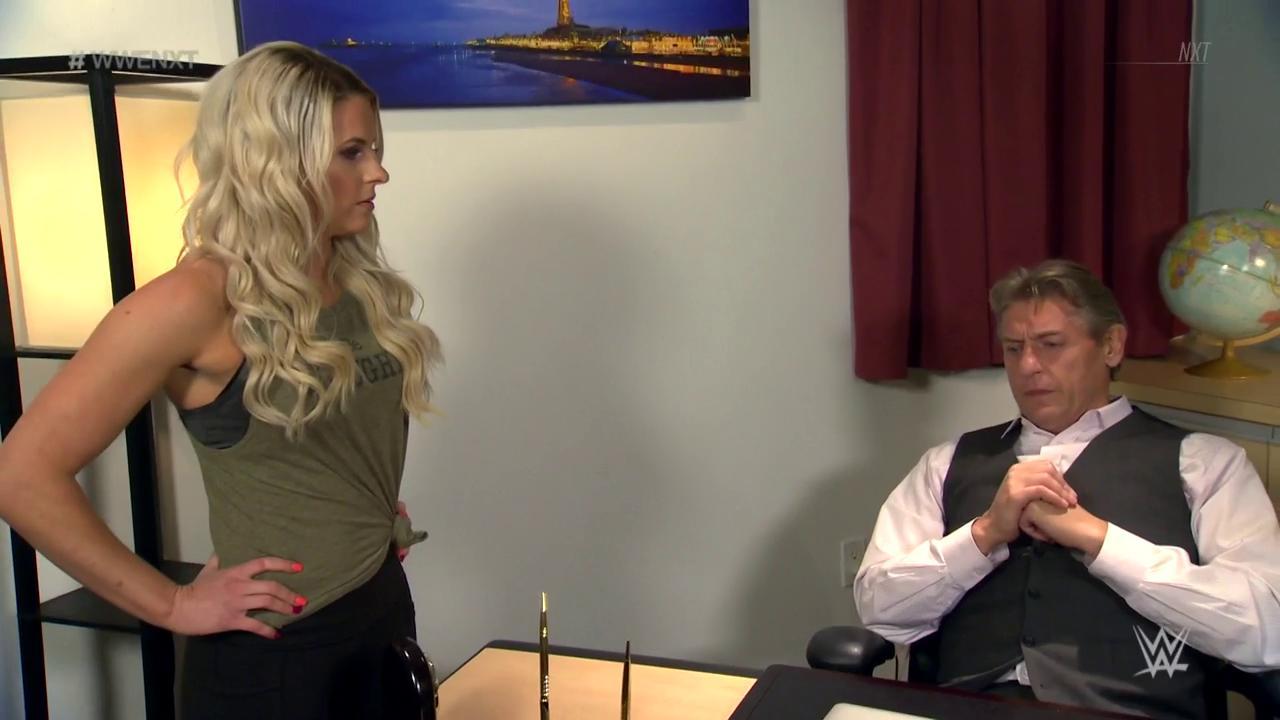 Candice LeRae enters William Regal’s office and she wants to know why Io is being rewarded by being put in the triple threat match next week. Candice says that Io may not make it into the match. William says it will not be a triple threat match, it will be a four way. The winner will face Shayna Baszler. He says if Rhea Ripley wins tonight, it might be a five way. Candice says if she can get her hands on Io, you can put anyone in that match. 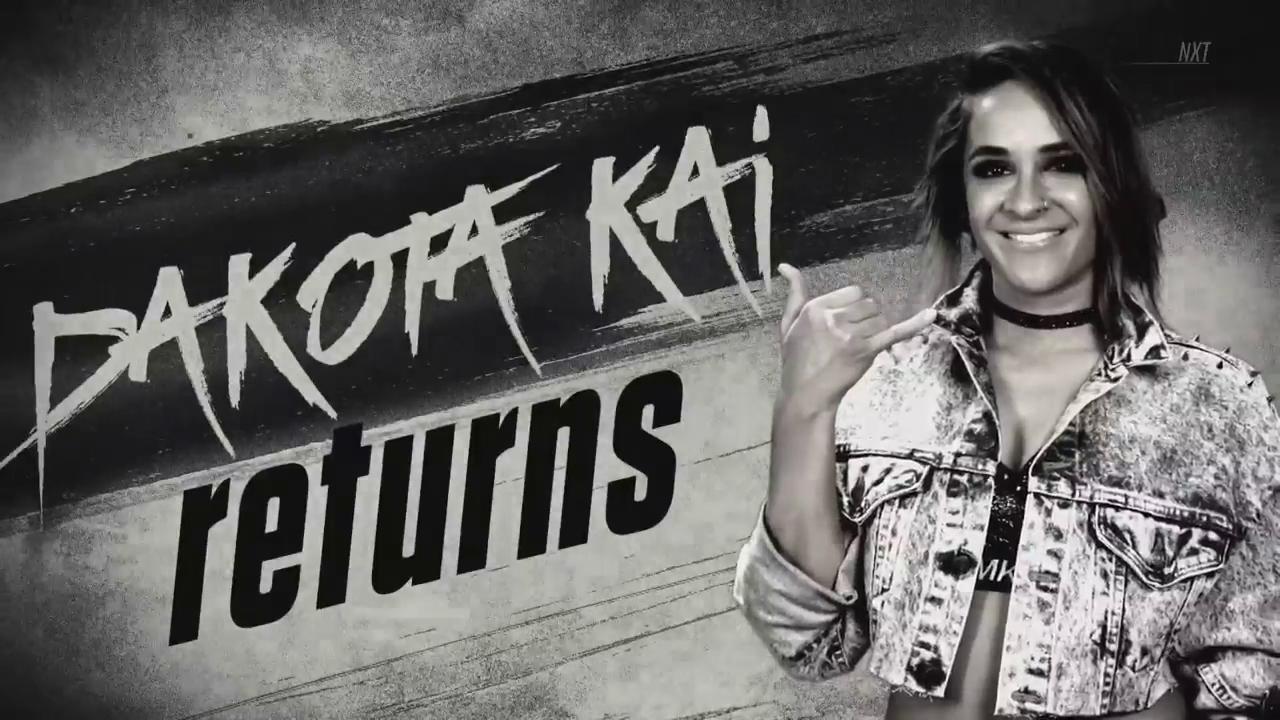 We see a video package for Dakota Kai, who is returning to NXT soon.

We are told that we will see a Street Fight between Matt Riddle and Killian Dain on the second hour of NXT, on the WWE Network.

Marina Shafir and Jessamyn Duke distract Rhea and Shayna with a knee to the back. Duke gives Shayna a chair and Shayna tries to hit Rhea but Rhea blocks it and hits Shayna with it.

Duke and Shafir help Baszler to the stage.

Rhea sits down in the chair and she wants more of Baszler. 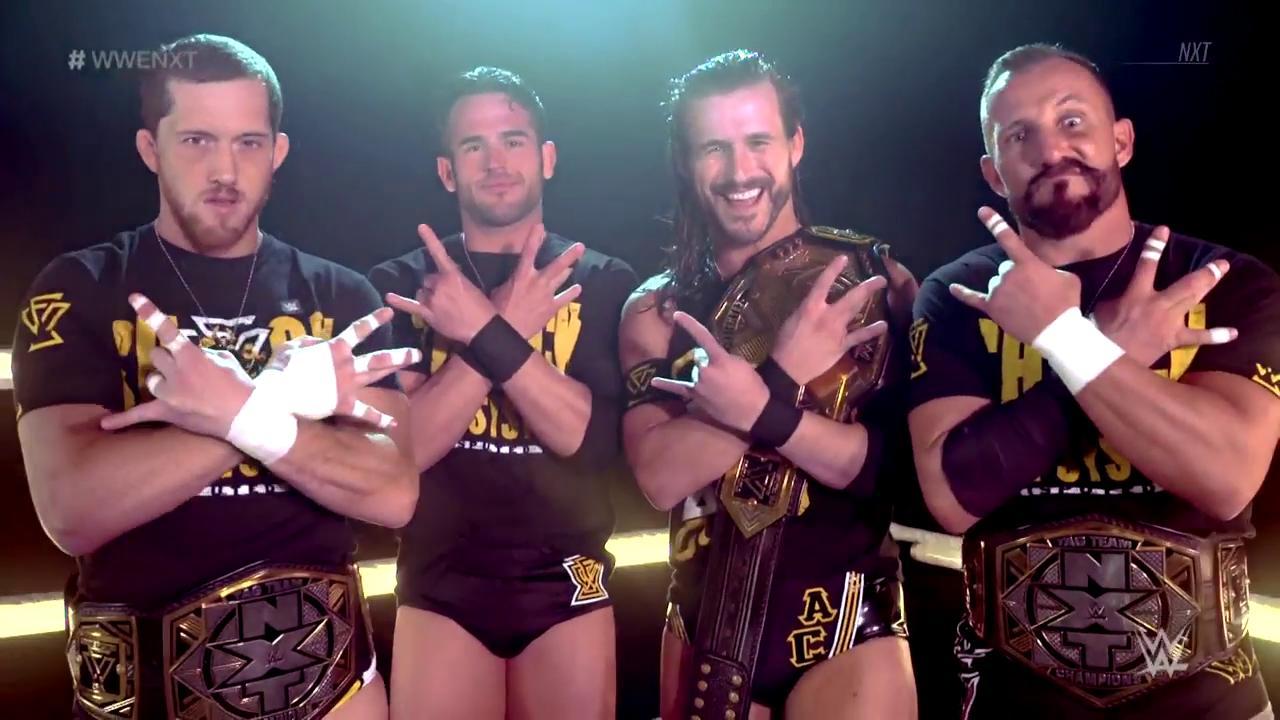 Adam Cole says the prophecy will be fulfilled. Not just the fact that NXT is going live next week, thanks to them. Roderick Strong finally beats the Velveteen Dream. Roderick says he got Dream’s attention. Roderick says he hates that couch and he hates Dream. Roderick will get what is his and he will get the North American Championship. Cole says NXT has been getting bigger and badder thanks to the Undisputed Era. When they have all the gold, no one on the planet will be able to stop them.