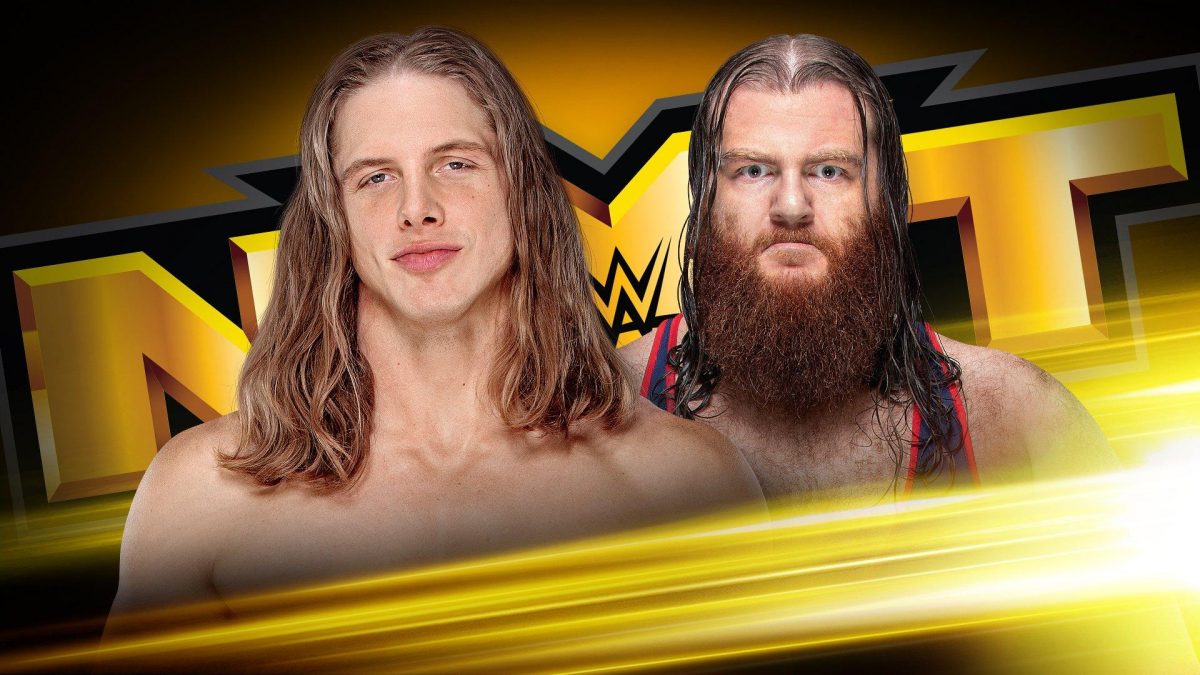 The Undisputed ERA walks out to a platform in the NXT Arena and hold up their titles. They will be watching the show from there. 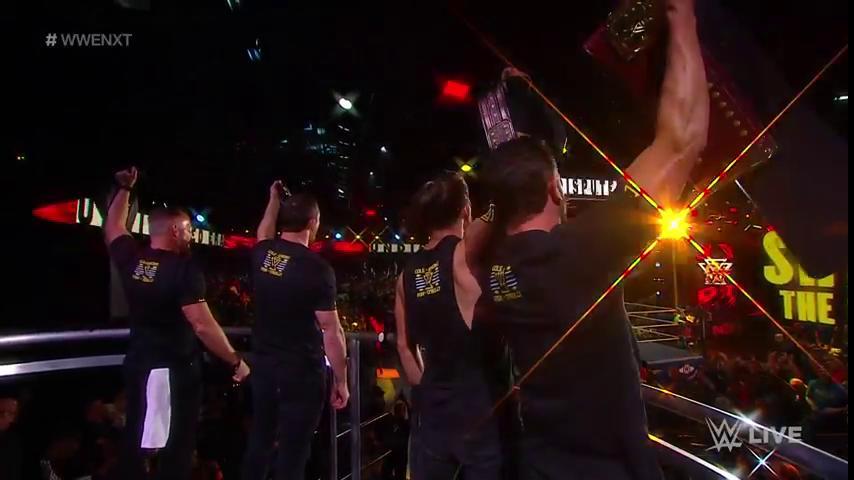 They stare at each other before locking up. Dijakovic applies a side headlock and goes for a kick, but Lee avoids it. Lee then goes for a jumping spin kick, but Dijakovic ducks it. The crowd chants for Lee. Lee blocks a kick from Dijakovic and pushes him to the corner. Lee charges and blocks another kick. Lee pushes Dijakovic off and leapfrogs him before connecting with a standing cross-body block. Lee hits the ropes and viciously shoulder blocks him over the top rope to the apron. Dijakovic slowly pulls himself up on the apron, and Lee grabs him. Lee goes for a suplex back into the ring, but Dijakovic blocks it. They each try to suplex, but each attempt is blocked. Lee then head-butts Dijakovic. Lee goes to the apron and grabs Dijakovic in a front facelock. Dijakovic grabs him by the throat, but Lee powers him off. Dijakovic then chokeslams Lee on the apron. An “NXT” chant picks up.

We come back from the break to see Lee stun Dijakovic and viciously slam him down. Dijakovic rolls to the apron to recover. Dijakovic goes to bounce Lee off the turnbuckle, but Lee blocks it. Dijakovic then chops away at Lee and bounces him off the turnbuckle. Dijakovic smiles, but Lee is just staring at him stone faced. Lee then knocks him to the floor and hits a corkscrew plancha!

Dijakovic quickly goes to the top rope and hits a moonsault, but Lee sits up with Dijakovic on top of him. Lee stares at him before getting to his feet. Lee puts him on his shoulders and hits a fireman’s carry powerslam for the win!

The commentators put over the fact that this series is tied 1-1.

The winner of this match will face Adam Cole for the NXT Championship sometime in the future.

The bell rings, and Riddle starts punching him. Riddle goes for a wristlock, but Dain throws him out. Riddle quickly takes him down and punches before going for an arm breaker, but Dain once again gets out. Dain kicks him and lifts him up, but Riddle slides off. Riddle drops down and kicks him in the head before kipping up. Riddle then hits a German Suplex for a two count. Dain rolls out of the ring to recover. Riddle goes outside and jumps off the steps with a flying forearm.

We come back from the break to see Dain avalanche Riddle in the corner. Dain digs his knee into Riddle’s face. During the break, Riddle smashed a kendo stick off Dain’s back. Dain then dropkicked him on the floor. Back to live action, Riddle hits a Final Flash knee strike. Riddle strikes him a few times before hitting a pair of Bro-tons and a penalty kick for a near fall. Dain gets him up in the electric chair, but Riddle connects with a victory roll for a near fall. Riddle knees him in the face and goes for a kick, but Dain avoids it. Dain lifts him up and slams him down before hitting a senton splash. Dain hits a powerbomb followed by an elbow drop for a near fall. Riddle lifts Dain up for an Alabama Slam and follows up with a Floating Bro corkscrew senton for a near fall.

Riddle charges him, but Dain sidesteps him to get him out of the ring. Dain then connects with a big suicide dive. An “NXT” chant picks up. Dain throws a chair at him before smashing it off his back. They fight into the crowd. Riddle sits Dain down in a chair and kicks away at the chest. Riddle then throws the chair down on him. Riddle bounces him off a table and slaps away at him. Dain rakes the eyes and sends him headfirst into a production crate. Dain talks trash to him and says Riddle is nothing to him. Riddle fights back at him, but Dain head-butts him back. Dain then hits him with a running cross-body block through a wall!

We come back from the break to see Riddle kick Dain in the face and hit a Bro-ton through a table! The crowd is loving this. Riddle punches Dain back to ringside and kicks away at him. Riddle gets Dain in the ring and hits a slingshot leg drop for a near fall. Riddle picks a chair up, but Dain crushes him with a running cross-body block with the chair between them. Riddle is in pain. Dain kicks the ribs and hits a trio of Vader Bombs, but Riddle somehow kicks out. Dain is furious.

Matt Riddle will face Adam Cole for the NXT Championship next week on WWE NXT! The show will air for two hours on the USA Network with limited commercial interruption.

NXT Champion Adam Cole makes his way to the ring. Cole gets in Riddle’s face and talks trash. Cole says Riddle isn’t in his league. Riddle then locks Cole in the Fujiwara Arm Bar, and Cole taps out! The Undisputed ERA runs down to save Cole. Riddle escapes.

This is the end of hour one on the USA Network.

The bell rings, and Carter quickly rocks Ripley with a dropkick. Ripley quickly pushes her off and hits a dropkick of her own for a two count. Ripley drives Carter into the corner and shoulders away at her. Ripley yells at the referee before hitting Carter with a delayed vertical suplex for a two count. Ripley mounts Carter and punches away at her. Carter comes back with a roll-up for a one count. Ripley sends her into the ropes, but Carter catches her with a hurricanrana. Carter chops the chest and hits a rope climbing flying hurricanrana. Carter hits an awesome springboard victory roll into a kick for a near fall. Ripley slams her before hitting the Rip Tide for the win.

Ripley celebrates in the ring before kicking Carter to the floor.

Oney Lorcan will start off against Matt Martel. They lock up, and Lorcan takes him down. Martel comes back, and tags in Chase Parker. Danny Burch tags in as well. Burch takes him down with a headlock, but Parker whips him off. Burch quickly picks the leg and uppercuts Martel. Lorcan tags in, and they hit a double-team Russian Leg Sweep. Lorcan gets knocked out of the ring, and Martel tags in. Martel punches away at Lorcan. Ever-Rise continues to work over Lorcan with double-team moves and isolating him in the corner. Martel applies a short-arm scissor on Lorcan. Lorcan fights up, but Martel clubs him down.

Burch is eventually tagged in, and he wipes out Ever-Rise with strikes. Burch forearms and punches Parker before head-butting Martel. Burch gets fired up, as does Lorcan at ringside. Lorcan tags in, and they hit a double-team hanging DDT for the win.

Chelsea Green and Deonna Purrazzo are shown at ringside. 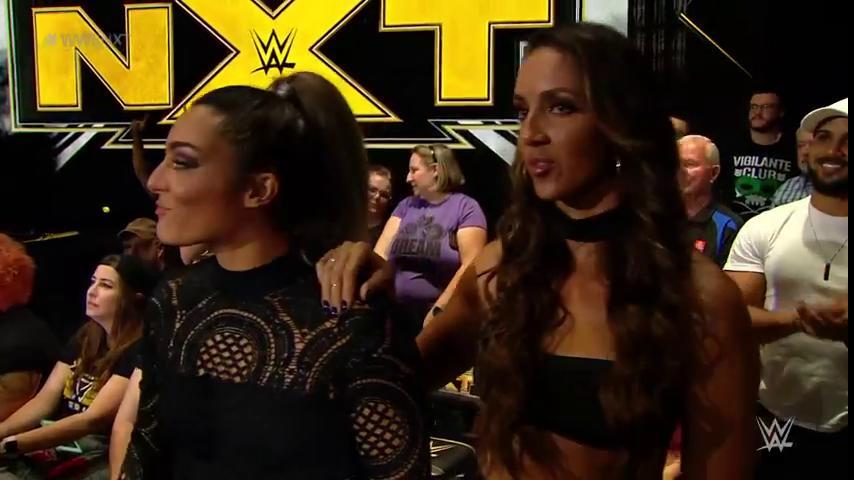 The bell rings, and Grimes immediately goes for the jumping double stomp, but Mendoza avoids it. Mendoza wrenches the arm, but Grimes gets out with a back body drop. Mendoza quickly grabs the arm again and brings him down to a knee with an arm wrench. Grimes rolls him up with a jackknife pin, but Mendoza fights up and covers for a two count. Mendoza hits a hurricanrana. Grimes avoids a shot in the corner, but Mendoza catches him with a springboard side headlock. Mendoza cinches in the headlock. Grimes gets up, and Mendoza stomps him. They hit the ropes. Mendoza goes for a cross-body block, but Grimes flips through in mid-air for a slam to pick up a near fall!

Grimes stomps the chest of Mendoza. Grimes chops the chest before whipping him hard into the corner for a two count. Grimes applies an arm bar, but Mendoza fights up. Mendoza takes him down, but Grimes keeps the momentum. Grimes goes back to an arm bar and cinches it in. Mendoza eventually fights up and hits an arm drag. Mendoza ducks a clothesline and wipes him out with a vicious running step-up enzuigiri. Grimes stumbles up to his feet, and Mendoza chops him to the corner. Mendoza whips him to the opposite corner and hits another running enzuigiri. Mendoza follows up with a springboard dropkick and sets up in the corner. Grimes counters him with a back elbow and goes to the top rope, but Mendoza hits a rolling kick to the head. Mendoza hits a frankensteiner for a near fall. Grimes counters a slam and rolls him up for a two count. Grimes immediately follows up with a leaping double stomp for the win!

Alexander Wolfe, Fabian Aichner, and Marcel Barthel will represent Imperium in this one. WWE United Kingdom Champion WALTER is not joining them at ringside because he is confident they will get the job done.

Kushida will start against Fabian Aichner. Aichner quickly throws him across the ring and stomps him in the corner. Aichner sends Kushida into the corner. Kushida hits a hip toss and follows up with a cartwheel kick for a two count. Aichner counters an arm bar and tags Marcel Barthel in. Bartel slams Kushida, and Alexander Wolfe tags in and hits a German Suplex. Breezango breaks up the pin. Wolfe goes for a slam, but Kushida gets out. Fandango comes in and hits a sunset flip roll-up for a two count. Fandango gets out of a slam and dropkicks him down for another two count. Fandango puts him on the top rope and tags Tyler Breeze in. They hit a double kick to the head for a two count. Breeze applies a front facelock and hits a suplex. Breeze drops a leg for a two count. Wolfe powers Breeze into the corner, and Aichner tags in. Imperium does some misdirection to knock Breeze out of the ring. Barthel tags in and floors Breeze with a running uppercut on the floor.

Barthel gets him in the ring and head-butts him before stomping the face. Wolfe tags back in and applies a modified chin lock. Breeze fights up, but Wolfe counters with a backbreaker for a two count. Aichner tags in and punches Breeze in the ribs. Barthel tags back in and sandwiches Breeze with a double-team dropkick along with Aichner. Barthel punches Breeze and puts him back in the ring. Barthel stands on Breeze’s arm and tags Wolfe in. Wolfe rakes the eyes with his boot before tagging Aichner in. Aichner kicks Breeze in the face and chokes him on the ropes. Aichner then hits a back suplex for a near fall. Breeze fights out and gives Aichner a back body drop out of the ring. Breeze gets away and goes for a tag, but Imperium pulls Fandango and Kushida off the apron! Imperium corner Breeze and beats him down in the corner. Aichner attacks Breeze and taunts his partners. Breeze then floors him with a step-up enzuigiri.

Fandango and Wolfe tag in. Fandango knocks Barthel off the apron and takes Wolfe down. Fandango punches Aichner and hits a falcon arrow. Fandango hits Wolfe with a tornado DDT before sending Barthel out of the ring. Fandango then hits a summersault senton on Imperium. Kushida tags in and hits Barthel with a springboard dropkick. Kushida hits a takedown and applies an arm bar. Breezango gets Wolfe and Aichner out of the ring. Kushida hits a handspring double heel kick. Kushida punches Barthel back and goes for a handspring back elbow, but Barthel uppercuts him. Kushida quickly comes back with a roll-up for the win!

Winners by Pinfall: Kushida and Breezango

WWE United Kingdom Champion WALTER attacks Kushida from behind with a vicious big boot. Imperium poses on the stage as NXT comes to an end 12 minutes before 10 p.m. Eastern.