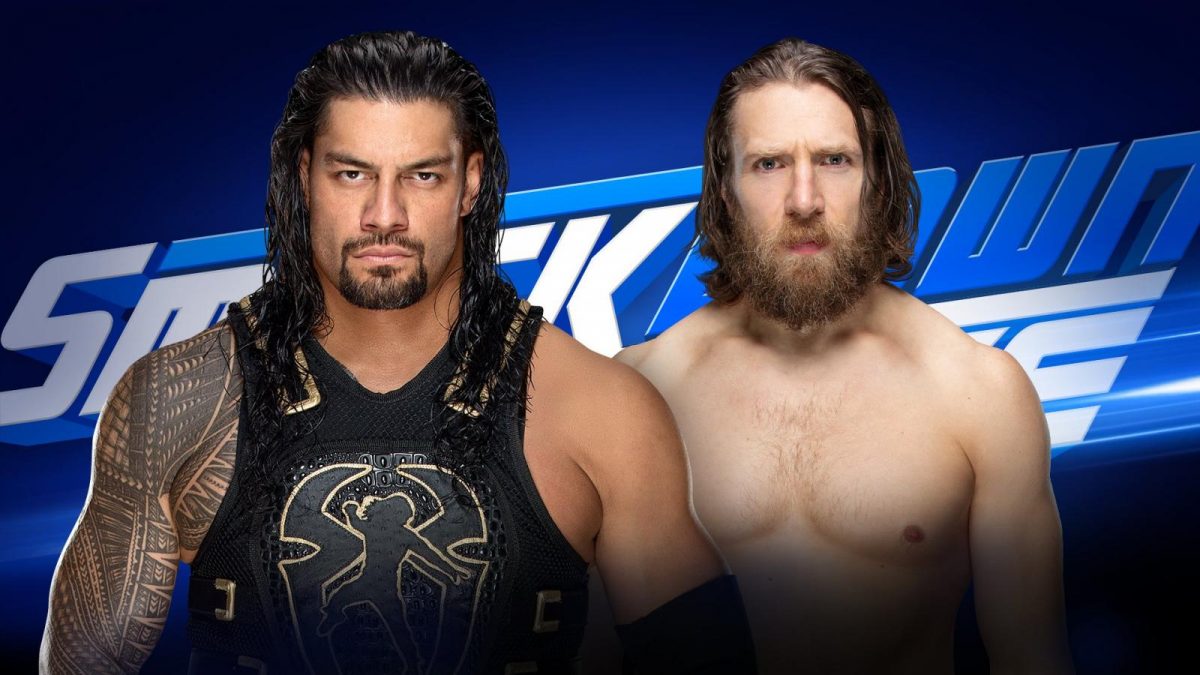 Live in the arena, it’s Erick Rowan making his way down to the ring. He grabs a microphone as the fans in the arena boo him. Rowan says what we just saw was a work of art. Some people paint or sing but what he does is annihilate. He wants to be called a creator and what he created was violence which commands respect.

Rowan says the fans like to call him names and they see him as less than human. But that has changed now. What matters is if you can destroy and dominate, that makes you right. Rowan Reigns knows he’s right, Daniel Bryan knows he’s right. The entire Smackdown locker room knows it and that is why they are afraid.

Daniel Bryan’s music hits and out he comes with a microphone. He says if Rowan wants some respect to fight him right now. The referee is in the ring and the bell rings.

He throws Bryan back into the ring. A kick to the face by Rowan and a headlock onto Bryan. Daniel fights out of it with an uppercut and kicks. He runs to the ropes but Rowan with a spinning kick. He goes for the cover but Daniel Bryan kicks out.

Back from commercial, Rowan with a forearm on the outside. Rowan lifts Bryan up and throws him back post into the ring post. Rowan rolls into the ring as the referee checks on Bryan.

At the count of 9, Daniel Bryan rolls into the ring. Rowan stomps on Bryan in the corner. He sends Bryan to the ropes and a running squash. He runs towards Bryan but Bryan with a dropkick on the knee. Both men back up and Bryan with a chop block onto the knee. With Rowan down, Bryan goes to the outside. He grabs Rowan’s leg and slams it into the ring post.

Bryan continues to work on the leg. Bryan back in the ring with Rowan in the corner. Bryan with running leg kicks. He runs once more but Rowan catches Bryan and slams him. He goes for the cover but Bryan kicks out. Rowan with a bear hug on Bryan in the middle of the ring.

Bryan gets out of it but Rowan hits him with a powerbomb. He goes for the cover but Daniel Bryan kicks out.

Back from commercial, Rowan runs towards Bryan but Bryan lowers the top rope and to the outside goes Rowan. Bryan goes for a suicide dive, Rowan catches him but Bryan gets out of it and sends Rowan shoulder first into the ring post.

Rowan rolls back into the ring. Bryan climbs the top rope and a dropkick from behind takes Rowan down. Bryan gets up and is hyped with the fans chanting “Yes”. Daniel Bryan with the yes kicks on Rowan’s shoulder. He goes for the cover but Rowan kicks out at the count of one.

Bryan climbs the ropes, he jumps but Rowan catches him. Bryan with a submission and brings Rowan down. Bryan with La Belle lock but Rowan reaches the ropes. Harper is at ringside and Bryan with a suicide dive. Harper gets right back up and Rowan grabs Bryan and hits the Iron Claw. However, Bryan’s foot is caught in between the rope. The referee and Rowan help him out of it. Rowan with a second Iron Claw. He goes for the cover and gets the pin.

Rowan gets in the ring and he goes after Bryan. In comes Roman Reigns who hits Rowan with a spear. Roman checks up on Bryan. He extends his hand to help Bryan up but Bryan slaps it away. Bryan grabs a microphone. He says all he wants is a one word answer. He asks if they want to see him and Rowan kick Luke and Rowan’s disrespecting asses. The fans chant yes.

The WWE world heavyweight champion Kofi Kingston is interviewed backstage by Michael Cole. He is asked about why he would accept Lesnar’s challenge. Kofi says the answer is simple. When he became champion, he made a promise that he would be a fighting champion, that’s it.

Cole asks how he prepares for Lesnar. Kofi says you can’t really prepare but he feels like he is at the top of his game. He beat samoa Joe, Dolph Ziggler, Daniel Bryan, Randy Orton and Kevin Owens. He feels good.

Michael hypes up next week’s match on Fox and if there is pressure. Kofi says he always feels pressure, he’s just trying to be the best champion. Kofi says it’s a huge deal for WWE to be with Fox. Lots of people think Lesnar will come in, be the big attraction and win but he has worked too long and too hard to let go of the title just yet. And he knows he will walk out of that Fox premier as the WWE champion.

Chad Gable is in the ring. He says last week, Corbin said no matter how hard he tries, he will always come up short. But his run at the King of the Ring and last night were not jokes. He had Corbin beat and Corbin knew it, that is why he got himself disqualified.

As he’s talking, Mike Kanellis interrupts and comes out. He walks down with a microphone. He tells him he is really sorry to come out and cut him short but he came here so he can prove to his pregnant wife that size does matter.

He goes face to face with Gable. The bell rings and an overhead belly to belly by Gable. A rolling German suplex followed by an ankle lock and Mike taps out.

We hear guitar strings as Elias appears on the big screen. Elias says he has been following his story and it has inspired him to write a song. Elias starts plying the guitar and says “Chad Gable the underdog, he has inspired inspired. If it were up to me little people like you would be fired. Imagine if you would have won the finals, imagine how people would feel. The winner can’t see over the steering wheel. Women laugh at you, you have nothing to give. Randy Newman said it best, short people have no reason to live.” 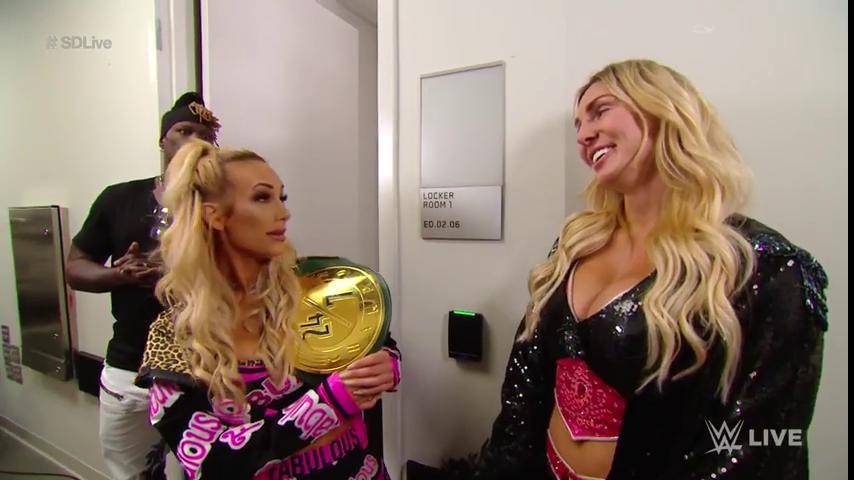 Charlotte Flair is walking backstage and R-Truth is standing at the door. he asks him if he has seen Carmella. R-Truth says he doesn’t know anyone named Carmella, especially not one who just won the 48/7 European TV champ. Out comes Carmella and Flair congratulates her but she wants her focused. Carmella says she is focused for tonight. The two are on the same page as R-Truth lets out a WOO.

Both women back up and a right hand by Banks as she throws Carmella to the outside. Bayley is tagged. She goes to the outside with the referee warning R-Truth to stay away.

Back in the ring, Charlotte fights off both Banks and Bayley but out comes Becky Lynch. She clears the ring taking both women out.

Sami Zayn comes out and he introduces the Intercontinental champion, Shinsuke Nakamura. The bell rings and we are underway. A dropkick by Ali takes Nakamura to the outside. Ali with a suicide dive. He throws Nakamura back in the ring. Ali climbs the top rope and a cross body. He goes for the cover but Nakamura kicks out. Ali is on the ring apron and is distracted by Zayn as Nakamura throws him into the ring post.

Nakamura runs towards Ali but Ali hits him with a super kick. He goes for the cover but Nakamura kicks out. An elbow to the face by Ali. He jumps off the second rope and a spinning DDT takes Nakamura out. Ali climbs the top rope but Sami Zayn pulls Nakamura out of the ring.

Ali runs and flips over the top rope and takes Nakamura out. He throws Nakamura back in the ring. Sami gets in his face as Ali chases him. Zayn gets in the ring and so does Ali. Nakamura hits him with the Kinshasa. He goes for the cover and gets the pin.

Curtis Axel with a headlock but Woods gets out of it. Axel pushes Woods in the corner. Dallas is tagged in. He knocks Big E off the ring apron and goes after Woods. He kicks Woods as Woods falls to the outside. The B Team gloat outside of the ring. They yell B Train and jog around the ring. Big E follows them as he throws Axel into the barricade. Dallas gets in the ring as Woods rolls him up but a two count only

Big E is tagged in and they hit the Midnight Hour. Big E goes for the cover and gets the pin.

Mandy Rose is backstage with Sonya as she hands out Maxim magazines with her on the cover. In comes Otis who stops her for a selfie. He grabs a copy as they walk away. Tucker joins him and says “my man.”

The Kabuki Warriors vs. Fire and Desire

The bell rings and it’s Asuka with Sonya in the ring. Asuka with right hands but Sonya with a take down. Both women back up and kicks by Asuka. Sonya gets some kicks of her own. A shoulder take down by Asuka.

Sane is tagged in. They double team Sonya. Sane goes for the cover but Sonya kicks out. Sonya with a right hand as she sends Sane to the outside. Mandy is tagged in. She grabs a magazine from Graves’ hand and flashes it around. Sane kicks it out of Mandy’s hands and kicks Mandy. She sends her into the ring. Sane with a scissors take down.

Mandy is down in the corner and a sliding elbow by Sane. With the referee distracted, Sonya hits Sane. Mandy goes for the cover but Sane kicks out. She sends Sane in the corner but Sane with right hands. Asuka is tagged in.

Shane McMahon is in the ring with his legal team. Shane asks Kevin Owens to come out. Kevin’s music hits but Kevin comes through the crowd. He is given a microphone. Shane says they have been going through his wrongful termination lawsuit and he has a proposition. Option 1 is Shane keeps him in court for years and makes him spend millions out of his own pocket. It would be one appeal after another. Option 2 is they drop the lawsuit and Shane will re-instate him on the spot and also will drop the $100,000 fine he hit him with.

McMahaon says in his view, let’s start with a clean slate as he extends his hand. Kevin says Shane is a real idiot. Kevin says Shane doesn’t get it. This lawsuit, the courtroom, it makes him sick. But Shane back there in the locker room makes him even more sick because Shane doesn’t belong there. He says the lawsuit isn’t about money but about getting Shane fired. Shane asks what he’s proposing.

Owens says to settle it, one final match. If Shane wins, Owens drops his lawsuit and stays fired. But if Owens wins, Shane is gone from WWE. Shane asks what the catch is. Kevin says there’s no catch but he doesn’t want this to be a regular match. Kevin says to have a ladder match and Shane accepts.

Becky Lynch is backstage. She asks if Sasha has an advantage having already performed in a Hell in a Cell match. Sasha attacks her from behind. She beats up on Lynch as Smackdown goes off the air.