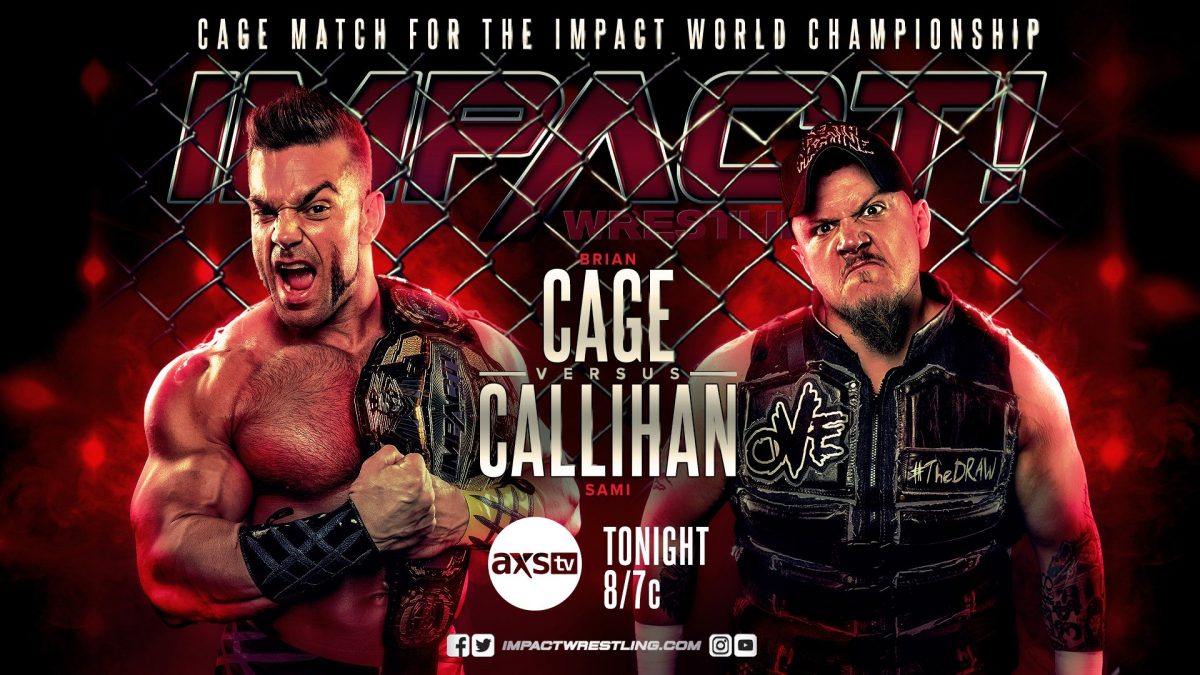 This is our time to shine.

Marufuji hits a dropkick, followed by running double knees to gain momentum in the early going. Alexander launches himself off the top, driving his knee into the neck of Marufuji for a two count. Marufuji connects with a series of kicks but Alexander comes right back with a big forearm shot. Alexander gets Marufuji up in the Torture Rack, then spins him down to the mat for a very close near fall. Marufuji connects with Sliced Bread #2 to pick up the win.

After the match, Marufuji offers his hand to Alexander but Page persuades him not to shake it.

.@TheSamiCallihan brought his entire oVe family to IMPACT tonight but @FultonWorld, @TheJakeCrist and @TheDaveCrist are BANNED from the building tonight! #IMPACTonAXSTV pic.twitter.com/sBfxyFsJ02

Security confronts oVe in the backstage area and tell Sami Callihan that the Crists and Madman Fulton are banned from the building tonight.

Fallah Bahh joins the Rascalz in the Treehouse and speaks for the first time ever.

Alexia hits the ropes but Taya attacks her from the apron, allowing Madison to gain control of the match. Kiera takes Alexia off the top with a high-risk Hurricanrana but tweaks her shoulder in the process. It turns out to be a hoax as she suckers Alexia in and pokes her eyes. Jordynne connects with a big splash on Taya. Jordynne rolls up Taya out of nowhere to score the upset victory.

RVD speaks for the first time since betraying Rhino at Bound for Glory. While on vacation with Katie Forbes, RVD claims that many professional wrestlers have stolen his move set but in the end, he’s still one of a kind.

The Desi Hit Squad wear down Rich, cutting off the ring and preventing him from making the tag to Willie. Rich turns it around with a clothesline to Rohit, allowing him to tag in the big man. Willie hits Rohit with a Samoan Drop, followed by his signature standing Moonsault for a two count. The Desi Hit Squad connect with a modified double team DDT on Rich but Willie breaks up the pin attempt. Rich hits Rohit with the handspring cutter. Rich and Willie hit a double team top rope neckbreaker to win.

.@Rhyno313 wants to beat @TherealRVD to within an inch of his life at Turning Point! #IMPACTonAXSTV pic.twitter.com/FRCev5X1I7

Rhino arrives to the arena and he’s furiously looking for the man that betrayed him at Bound for Glory, Rob Van Dam. Rhino threatens RVD and challenges him to a match at Turning Point on IMPACT Plus.

Moose is on the golf course to prove he’s the best multi-sport athlete of all time.

Ken Shamrock is in the ring to address his future in professional wrestling. Joey Ryan interrupts and claims his thing can tap out Shamrock faster than the Gracie choke. Shamrock doesn’t back down and challenges Joey to a match next week. Joey tries to get Shamrock to touch it but he avoids it, sending Joey retreating up the ramp.

Eddie jumpstarts the match with a dive through the ropes to the floor. Eddie brings out the weapons but Ace turns it around with a trash can shot. Eddie is about to put Ace through a table when Reno Scum interferes. Eddie sends Thornstowe through the table with a belly-to-belly throw. Ace regains control off the distraction with a springboard leg drop onto a garbage can. Eddie takes Ace off the top rope with a huge back body drop. Eddie swings a kendo stick but Ace blocks it with the X-Division Title and cracks him over the head with it. Ace breaks Kenny the kendo stick over his knee. Ace loads his fist with a piece of steel and clobbers Eddie, then hits a super Fold through a table to win.

Su Yun…..er Suzie is back from the dead and she's normal?

Su Yung debuts her new persona as Suzie but even she doesn’t know what happened to the Su Yung of old.

Johnny Swinger hits on Alisha but Ace Austin puts a stop to it. Ace finally persuades Alisha to have dinner with him.

Before the match even begins, Sami kicks the cage door into the face of Brian. Sami locks him out of the cage but Brian lunges up the wall, over the top and into the ring to start the match. Sami hits Brian over the head with his baseball bat, busting him open in the process. Sami connects with a huge clothesline for a very close two count. Sami hits his signature Cactus Special Piledriver but Brian kicks out at one. Sami hits repeated strikes, followed by three Cactus Special Piledrivers but Brian somehow kicks out at two. Brian hits an Alabama Slam, followed by a massive discus clothesline for a near fall of his own. Sami connects with a vicious Piledriver off the top to win the match and become new IMPACT World Champion.

After the match, Tessa Blanchard confronts Sami Callihan and makes her intentions clear – she’s coming for his World Championship. IMPACT on AXS goes off the air.