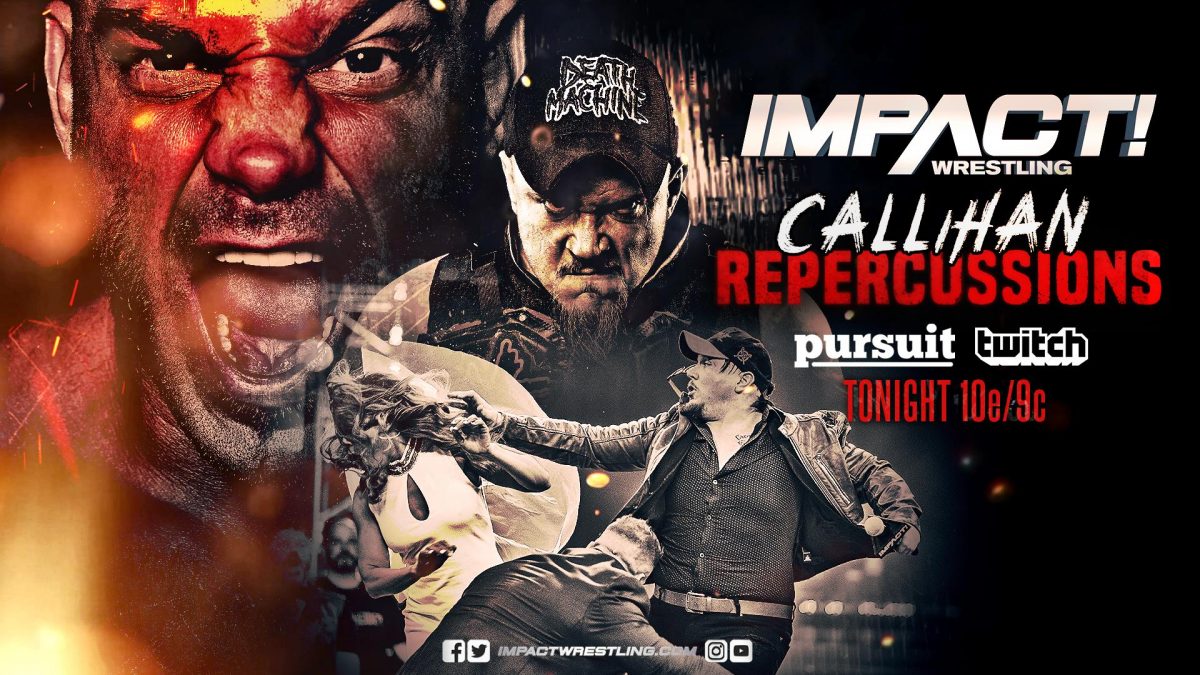 Sami Callihan arrives to Sam’s Town with the other oVe members acting as his security guards. After what he did last week to Melissa Santos, he’s going to need it.

Kiera and Madison work together to do damage to Tenille but in the end, only one can win this 3-way match. Tenille attempts to fight back on multiple occasions but continues to fall victim to the numbers game. Kiera attempts a dive to the outside but Tenille pulls Madison in front of her. Tenille powerbombs Madison on top of Kiera for a near fall. Tenille sends Kiera to the outside, then connects with the Spotlight kick on Madison to win.

Backstage, Eddie Edwards is trying to explain to Tommy Dreamer that he was drugged by Reno Scum at Brian and Melissa’s wedding last week. Tommy doesn’t buy it but offers to be Eddie’s tag partner against Reno Scum tonight. Eddie instead chooses Kenny the kendo stick to be his partner.

It’s time for the in-ring debut of Johnny Swinger. He takes control of Travers in the early going. Swinger hits a big swinging neckbreaker to pick up the dominant victory.

Gabby Loren informs The North that they’re defending the Tag Team Championships against the teams of Rich Swann & Willie Mack, and RVD & Rhino in a 3-way match at Bound for Glory.

Tessa Blanchard tells Gabby Loren that Sami Callihan’s actions against Melissa Santos didn’t come as a surprise to her. Tessa says that each member of oVe has a target on their back.

Eddie Edwards is teaming up with a kendo stick in this match. Eddie attempts to make the tag to Kenny but Luster stops him. Reno Scum beats down on Eddie with the 2-on-1 numbers advantage. Eddie gains momentum with a Blue Thunder Bomb to Thornstowe. Eddie makes the tag to Kenny, allowing Eddie to use the kendo stick as a weapon. Eddie hits Thornstowe with the Boston Knee Party to win.

The North confront Konnan in his dressing room for getting RVD & Rhino a shot at the Tag Team Championships. When we come back from commercial break, Konnan is laid out.

Sami Callihan is in the ring surrounded by oVe security. He apologizes for smashing the glass bottle over the head of Melissa Santos last week and ensures everyone that it was an accident. Brian Cage has heard enough and out comes the Machine. Cage takes out all members of oVe security as Sami Callihan escapes through the crowd. A fan touches Cage from behind the guardrail but Cage thinks it’s a member of oVe, causing him to slam the fan to the ground. Realizing what he has done, Cage immediately looks concerned. Las Vegas Police runs down to the ring and arrest Cage.

X-Division Champion Jake Crist joins Don Callis and Josh Mathews on commentary. Daga hits a running dropkick for an early near fall. Bey sends Daga to the floor, then follows up with a dive over the top rope to the outside. Bey connects with a slingshot DDT for a two count. Daga hits a top rope Spanish Fly, followed by a modified butterfly driver to win.

After the match, Jake and Dave Crist attack Daga when Tessa Blanchard makes the save. Tessa clears the ring as she stands tall with Daga.

Backstage, Gabby Loren interviews TJP ahead of his big match against Michael Elgin tonight. It also seems like TJP is also making progress with helping Fallah Bahh find his voice.

Josh Mathews hosts a press conference for Moose vs Ken Shamrock at Bound for Glory. Moose reveals that MMA legend Frank Trigg is training him for the bout. Shamrock confronts Moose and questions why he calls himself Mr. IMPACT when he’s never won the World Championship. Shamrock and Moose get in each other’s face, causing a brief fight to break out before being broken up.

James Mitchell is angry at Havok for hanging Su Yung two weeks ago on IMPACT because they must now face the wrath of “you know who”. Taya Valkyrie interrupts and tells Havok she’ll give her a Knockouts Title opportunity if Havok takes out Tenille Dashwood for her. Mitchell quickly reminds Taya that she’s never defeated Havok and threatens to take her belt right now. Taya is scared and runs off.

TJP launches himself to the outside but Elgin catches him in mid-air and hits a big powerbomb on the apron. TJP connects with a springboard Hurricanrana, taking Elgin off the top. Elgin hits a massive clothesline for a two count. TJP dives through the ropes but Elgin counters into a slam on the steel ramp. Elgin follows up with a dead-lift suplex into a Falcon Arrow but TJP somehow kicks out. Elgin puts TJP away with a thunderous Elgin Bomb.

Melissa Santos arrives at the police station to bail out Brian Cage when she’s confronted by Sami Callihan. He tells her the bottle wasn’t meant for her last week but can’t deny that it felt good when it hit her instead of Cage. IMPACT Wrestling goes off the air.