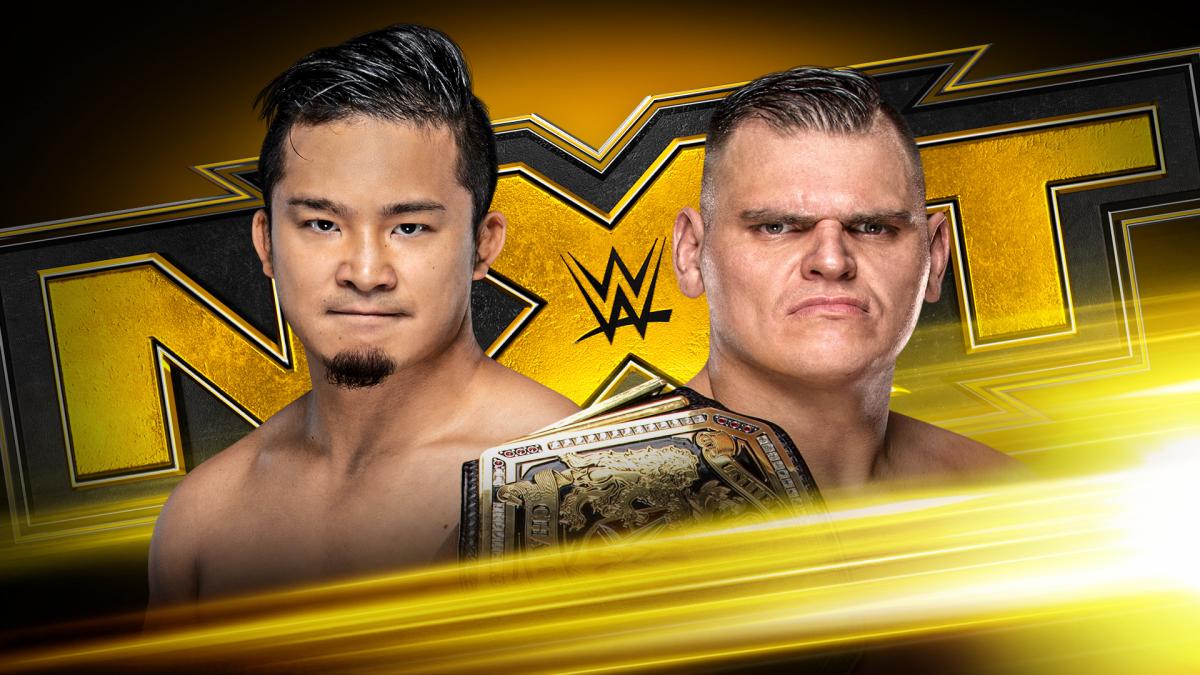 Gulak blocks a kick and flips Rush but Rush lands on his feet. Gulak with a clothesline for a near fall. Gulak goes for a slam but Rush lands on his feet. Gulak rolls under Rush on a leap frog and Gulak goes for a sunset flip but Rush rolls through. Gulak counters a handspring cutter into the GuLock. Rush rolls over and gets a near fall. Rush with a Dragon Sleeper on Gulak but Gulak gets Rush on his shoulders. Gulak hits the Cyclone Crash but Rush gets his foot on the ropes to stop the count. Gulak with another near fall.

Gulak puts Rush on the turnbuckles. Gulak sets for a superplex but Rush punches Gulak to stop him. Rush with forearms and Gulak stays on the middle rope for a moment. Gulak is pushed off again and Rush with a frog splash. Rush with a springboard cutter. Rush goes up top and hits a frog splash for the three count.

After the match, William Regal puts the Cruiserweight Title belt on Rush but Drew takes it from Lio and he hands the belt to Lio. They shake hands and Gulak leaves the ring.

We see a Tegan Nox video package. She talks about the injury lighting a fire in her. She talks about how hard rehab is. She mentions having people around her to help her get ready for her return. She says when she got her knee brace, she was ready to go back. Tegan says she wants to make a statement to everyone.

Tegan will be in action next week.

Tegan Nox is in the back with Dakota Kai as Dakota sets for her match with Bianca Belair.

They lock up and Rhea sends Aliyah to the mat and then Aliyah goes into the ropes to avoid Ripley. Ripley with an Irish whip but misses a splash into the corner. Aliyah with a chin lock but Rhea with a snap mare and kick. Aliyah gets to her feet on a suplex attempt and Aliyah rakes the back. Ripley with short arm clotheslines followed by a drop kick. Ripley with an elevated cloverleaf and she wings Aliyah. Rhea hits a gourdbuster and Aliyah taps out.

After the match, Ripley takes the mic and she says there is no doubt that Shayna Baszler is the most dominant women’s champion in NXT history. Shayna has not beaten her. Rhea tells Shayna she is coming for her.

Jaxson Ryker pulls out Ever Rise, who were supposed to face Tyler Breeze and Fandango.

Cutler and Breeze start things off and Breeze with punches. Blake tries to interfere and Breeze stops him. Breeze with a kick and he goes for the Unprettier. Blake distracts Breeze and Cutler with a back breaker and kicks. Cutler with a back elbow. Blake tags in and Cutler hip tosses Blake into Breeze and Blake gets a near fall. Cutler tags back in and they hit a double uranage back breaker for a near fall. Cutler with kicks and Blake tags in and Breeze escapes a double team move. Breeze sends Cutler to the floor and Fandango tags in.

Grimes with a jumping double stomp for the three count.

We go to Damian Priest talking about the cameras and attention. That is why he laid out Pete Dunne. Pete, you made quite the name for yourself in NXT. Your name to him is just the bullseye. He saw the target and made his mark. He is going to live in infamy in your name Pete. The name Damian Priest will live forever.

Scott with kicks and the members of The Undisputed Era make their way to ringside. Scott with a drop kick to catch Strong in the turnbuckles followed by a hanging DDT for a near fall. Strong with an elbow and he gets Scott on his shoulders but Scott goes to the apron. Scott with a German suplex and a leaping flatliner and a jumping kick to the head for a near fall. Strong rolls to the apron while Scott goes up top. Scott punches Strong and Scott with a leg sweep and thrust kick that has Strong hanging from the ropes by the feet and Scott with a slingshot double stomp.

Scott is distracted by Kyle and Bobby and Strong with a jumping knee and flying knee. Strong with End of Heartache and the Strong Hold. Scott taps out.

After the match, Cole tells everyone to give it up for Isiah Scott. He is good, but he is not near the level of Roddy. That is what he loves about NXT. The best of the best come here to see if they can compare to the Undisputed Era. That is why Finn Balor came back and Tommaso Ciampa returned. They think they will uncrown the Undisputed Era.

Velveteen Dream appears on the HunterTron and he makes his way to the GameNest.

Dream says the reality is that Undisputed Era, some of you are great. Roderick Strong, allow the dream to show you what your reality is. He shows the photo of Roderick Strong posing on the couch with his belt. Dream says in two weeks, you will get to experience the Dream again in a North American Championship Match. When the Dream strips you of the North American title, the world will see why you don’t just measure up. Dream shows a photo without the belt and a small blurred out area.

Tommaso Ciampa makes his way to the stage and he has a crutch with him. Ciampa adds a chair to his cache of weapons. Ciampa enters the ring and the Undisputed Era leaves.

Tommaso Ciampa sits down in the ring and he has a mic. Ciampa tells Goldie that Daddy’s home.

After commercials, we are back with footage of Cathy Kelley waiting for Tommaso Ciampa to come through the back. Angel Garza tries to talk to Cathy but she ignore him. Angel is shocked that Cathy would wait for Ciampa. Garza speaks in Spanish and Ciampa punches Garza.

Cathy asks Ciampa what did Garza just say and Ciampa says he has no idea.

After the match, Bianca Belair takes the mic and she says she heard what Rhea Ripley said earlier about being the one to beat Shayna Baszler. Bianca tells Rhea uh-uh. She does not care that Rhea was the first NXT UK Women’s Champion because if someone wants a piece of Shayna, they have to go through her. 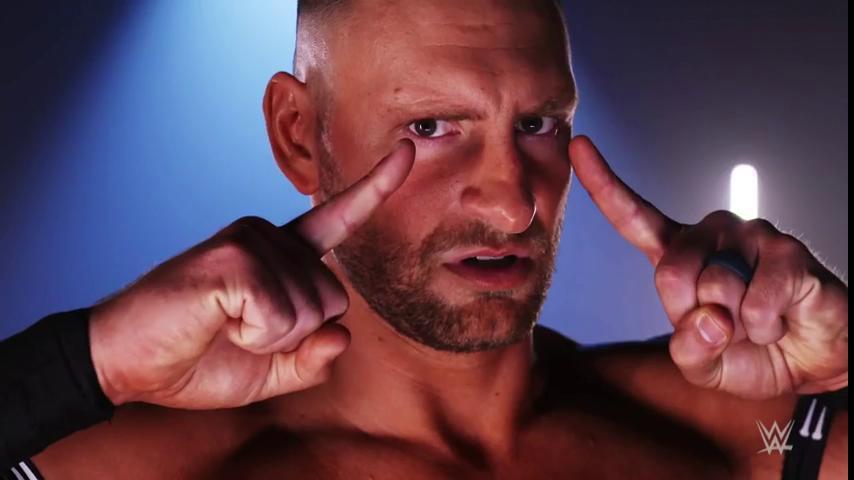 We go to comments from Dominik Dijakovic. He says there are so many similarities. It is like they were made to fight forever. They bring out the best in each other. He says he knows Keith Lee’s limits. He has been studying Keith and he knows his limits. He knows Keith’s secrets. Next week it is for everything and Dominik says he does not expect to lose.

We have a video for Finn Balor.

We go to comments from Pete Dunne. He tells Damian to keep up. When he arrived in WWE, Triple H told him to make a name for himself and he did. He is not going to let Damian Priest make a name for himself off the back of the Bruiserweight. He is not done yet. He knew he would have to go through people in NXT. How will Damian shoot arrows if he fingers are broken. Damian says he will live forever, but will he survive next week.

KUSHIDA with a drop kick to the arm and WALTER wtih a chop. KUSHIDA with Kawada kicks to WALTER. KUSHIDA goes for a tornado Divorce Court but WALTER with a drop kick and power bomb for a near fall. WALTER waits for KUSHIDA to get up and he slaps KUSHIDA followed by a short arm clothesline for the three count.

We go to credits with Imperium appearing on the stage to celebrate their compatriot’s victory.