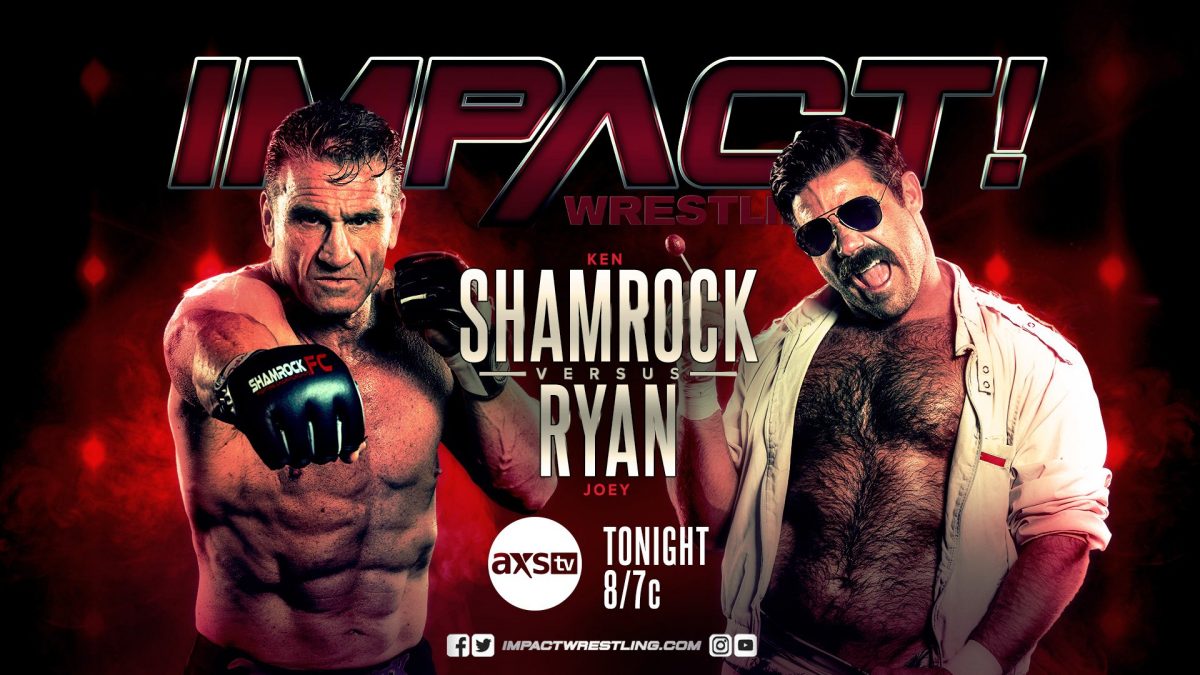 "We're here drinking beer like men, not a little bit of the bubbly like a bunch of bitches!" @TheSamiCallihan celebration is already underway. #IMPACTonAXSTV pic.twitter.com/6zhdqSckiO

Sami Callihan’s Championship celebration starts early as oVe has a few drinks outside the arena to kick off IMPACT!

Willie hits a Hurricanrana to gain control in the early going. Moose connects with a delayed dropkick in the corner. Moose shows off his incredible strength with a strong Irish whip in the corner. Moose hits the Go to Hell Sitdown Powerbomb for a near fall. Willie builds momentum with a Stunner, followed by a huge clothesline that turns Moose inside out. Moose takes Willie off the top with a thunderous Superplex, followed by the No Jackhammer Needed Spear to win.

It would seem @The_Ace_Austin has finally been caught in the act by @MrsAIPAlisha. #IMPACTonAXSTV pic.twitter.com/moAMSmarzI

Alexia Nicole prepares Alisha for her date with Ace Austin tonight. Alisha overhears Ace telling Reno Scum that he used Alisha to get in the head of Eddie Edwards.

.@TheTayaValkyrie wanted nothing to do with facing the #LRL @MadisonRayne…..until she came face to face with @JordynneGrace instead. #IMPACTonAXSTV pic.twitter.com/v6Tt0oQedF

Knockouts Champion Taya Valkyrie, Madison Rayne and Kiera Hogan argue after losing their six-Knockout tag team match last week. Taya is confronted by Jordynne Grace who reminds her that she pinned the champ and is owed a Title opportunity.

Elgin hits a running dropkick through the ropes, sending Fallah crashing to the floor. Elgin follows up with a slingshot double foot stomp from the apron into the ring. Elgin connects with an impressive vertical suplex on the big man. Fallah comes back with a clothesline, then sits on Elgin for a two count. Elgin takes Fallah off the top but it doesn’t effect him. Elgin is finally able to put Fallah away when he submits him with a Crossface.

Backstage, Alisha tells Ace that they should skip dinner and head right to the hotel room.

And they want to face @noah_marufuji_ and a partner NEXT WEEK! #IMPACTonAXSTV pic.twitter.com/9WX2b7H7uv

Shamrock sunset flips into a heel hook but Joey gets to the ropes. Joey hits a big clotheslines to gain momentum. Joey makes Shamrock touch it but that just angers the MMA legend. Shamrock locks in the ankle lock and makes him tap out to win.

As Sami Callihan’s Championship celebration rolls on, Jake Crist mocks Daga in the locker room. They’re confronted by Rich Swann and Daga himself. Swann deescalates the situation, knowing the trouble that oVe can bring.

Taya builds momentum with a running dropkick. Bravo trips up Madison from the outside, allowing Taya to regain control. Taya hits a spinning sitdown Powerbomb for a near fall. Madison turns it around with a tornado DDT. Madison is about to win with the Ripcord Cutter but Bravo breaks up the pin attempt by throwing the dog in the ring. Madison tosses it into the crowd but Taya capitalizes off the distraction with Road to Valhalla to win.

After the match, Jordynne Grace confronts Taya on the ramp. Jordynne takes out Bravo while Taya retreats.

Gama berates Rohit Raju and Raj Singh for their poor performance in the Call Your Shot Gauntlet at Bound for Glory. Gama introduces Bhupinder Singh as his new protege and threatens that if he does well, he may replace one of them in the Desi Hit Squad.

Rosemary doesn’t believe that Suzie has no recollection of her past self, Su Yung. Suzie runs into Havok, the very person who attempted to kill her just a few months ago.

Petey hits a Hurricanrana to send Bhupinder to the floor. Bhupinder catches Petey in mid-air and powerbombs him on the apron. Petey connects with another Hurricanrana, this time into a side Canadian legsweep. Bhupinder hits a powerslam for a near fall. Petey locks in the Sharpshooter to win by submission.

After the match, Bhupinder Singh is about to attack Cameron the referee but Petey makes the save. Cameron hits a 619, followed by a 450 splash and celebrates with the crowd.

In the immortal words of Admiral Ackbar, it's a trap!

Ace Austin arrives to Alisha’s hotel room for the bangorama. Alisha makes him put a blindfold on but it turns out to be a setup. Eddie Edwards attacks Ace and even Alisha gets a shot in with a kendo stick. Ace is sent retreating while Alisha and Eddie show their love for each other on the hallway floor.

In the ring, it’s time for the culmination of Sami Callihan’s Championship celebration. Jake Crist, Dave Crist and Madman Fulton praise Callihan for defeating Brian Cage inside a steel cage to become the new World Champion last week. Tommy Dreamer interrupts and blames Callihan for ruining last week’s monumental episode of IMPACT on AXS TV. Tommy calls the fans and the rest of the locker room the true draws of IMPACT Wrestling. Tommy challenges oVe to an Extreme Celebration 4-on-4 tag team match.

Chaos reigns supreme as a huge brawl erupts around the ringside area. Dreamer sends Dave face first into a cake with a cutter. Tessa holds a steel chair in front of Jake’s face and Dreamer drives it into his skull with a running dropkick in the corner. Fulton connects with a modified swinging slam on Dreamer. Swann hits Callihan with a flurry of offense but Callihan turns it around and sends him flying to the floor. Tessa hits a cutter on Callihan, then dives off the top into everyone on the outside. Tessa connects with a huge Tower of Doom out of the corner. Swann rolls up Callihan and pins him out of nowhere to win.