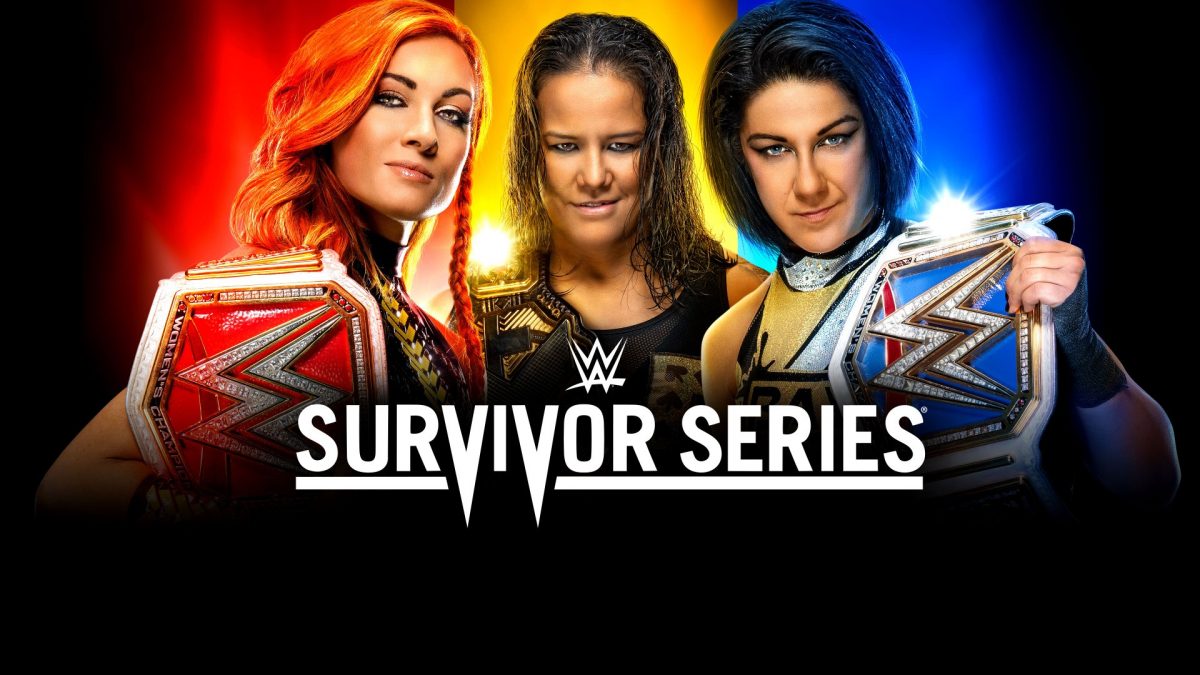 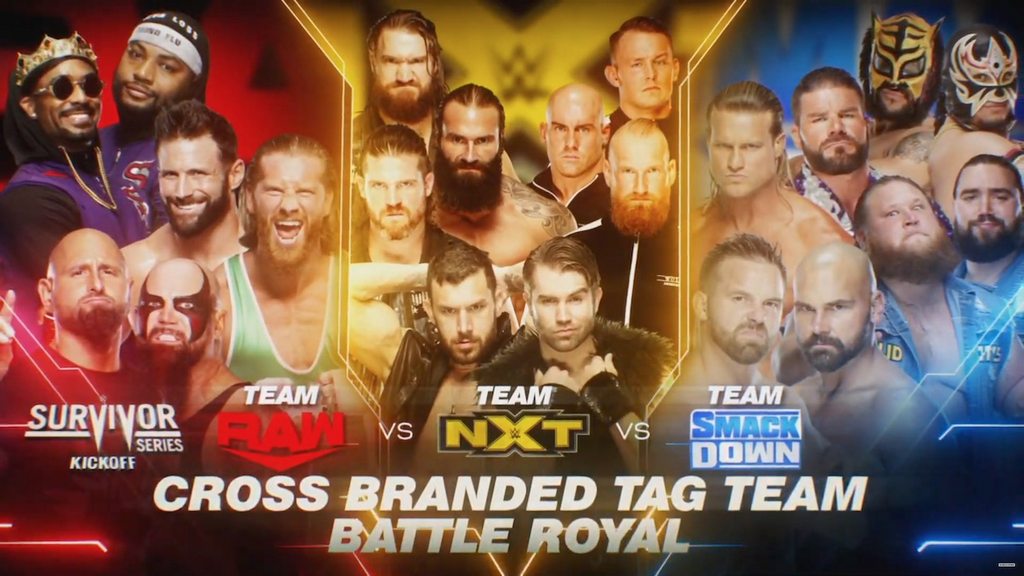 If your partner is eliminated, you’re out. The winning team wins a large trophy.

This was a pretty bad battle royal, with really nothing happening and no interesting spots. 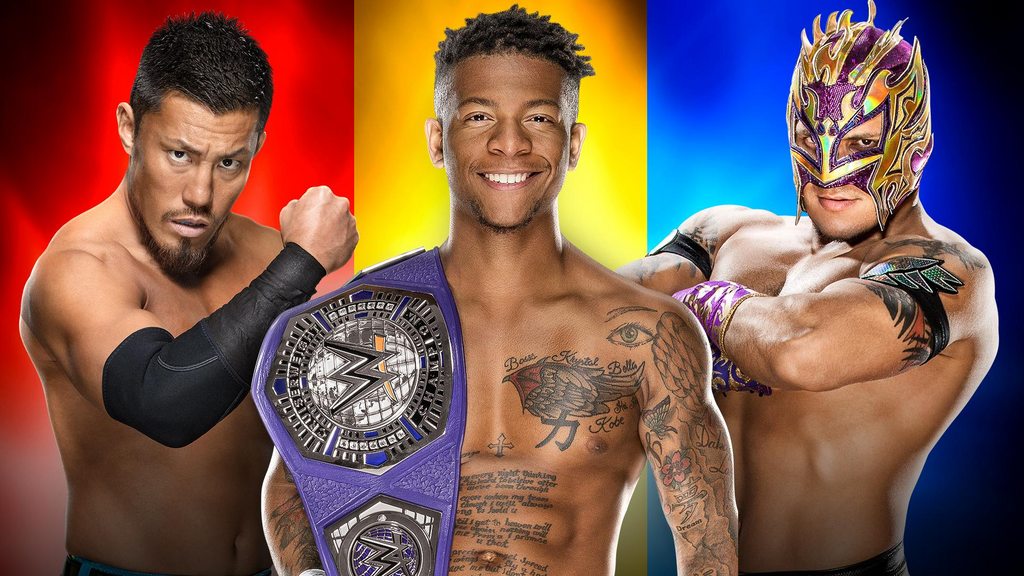 A few minutes in, Kalisto hit Salida del Sole on Rush, but Tozawa broke up the pin. Tozawa went to the top and nailed Rush with a senton, but Kalisto broke up the pin. Tozawa and Kalisto faced off and Kalisto nailed him with a Salida del Sole out of nowhere, but Lio Rush immediately jumped off the top with the Final Hour (frog splash) on Kalisto for the win.

Pretty standard WWE cruiserweight match that picked up towards the end and won over the crowd. 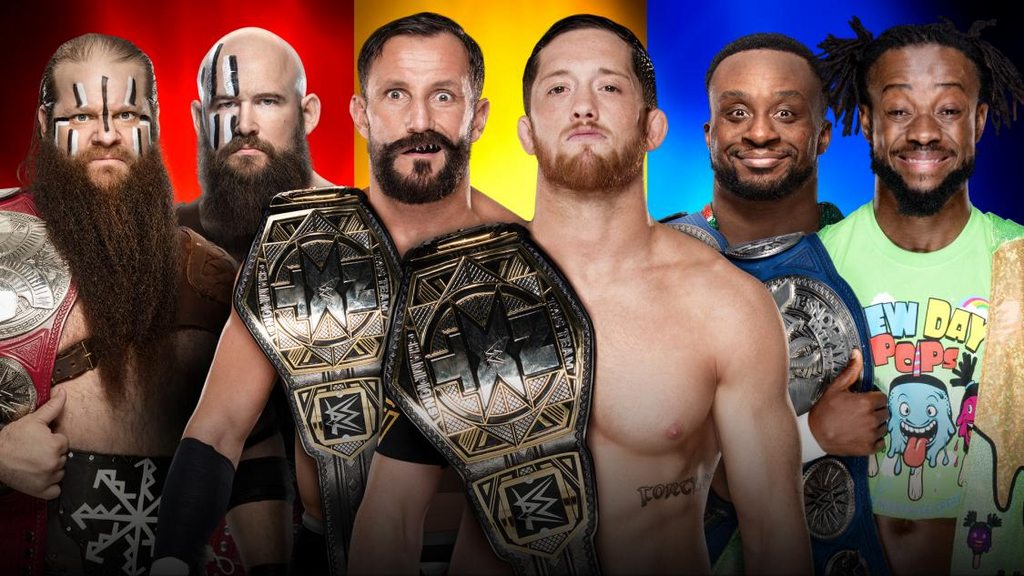 A few minutes in, the Viking Raiders hit Big E with a double team assisted springboard German suplex. On the outside, Kofi went for Trouble in Paradise on Fish, but missed and Kofi hit the post, then Undisputed Era hit him with the High/Low. In the ring, Undisputed Era went for High/Low on Ivar, but missed and he hit them both with a double springboard elbow. The Viking Raiders then hit Fish with the Viking Experience for the win. Pretty good match. 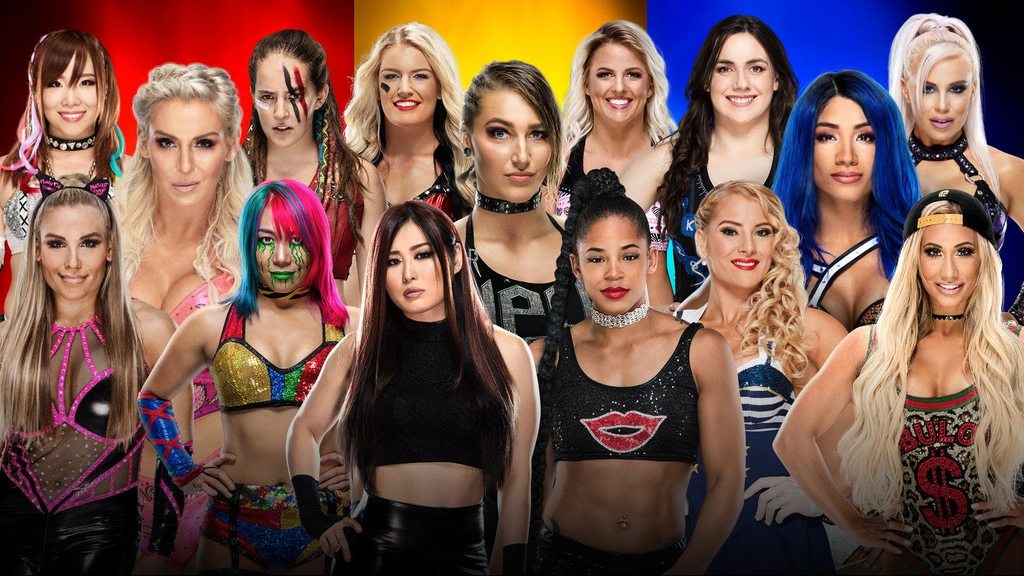 A wrestler from each team (three wrestlers) will be in the match at the same time.

One member of each team remained: Sasha Banks, Natalya, Rhea Ripley. Sasha suddenly punched Natalya in the face and pinned her! Natalya was eliminated. Only Banks and Ripley remained. They faced off and the crowd popped. Meteora off the middle rope by Banks, but Ripley kicked out. Sasha tried again, but Ripley hit her with a big boot, then locked on her signature submission… but Banks broke free and locked on the Bank Statement.

Io Shirai and Candice LeRae suddenly ran out! They were playing possum earlier. They pulled Ripley to safety. Seems unfair… Shirai hit Banks with a springboard dropkick, then Ripley hit her with the Rip Tide. 1-2-3. This was a good match and the crowd was hot, but I didn’t like the whole fake an injury, then hang out backstage for the entire match only to return at the end thing. 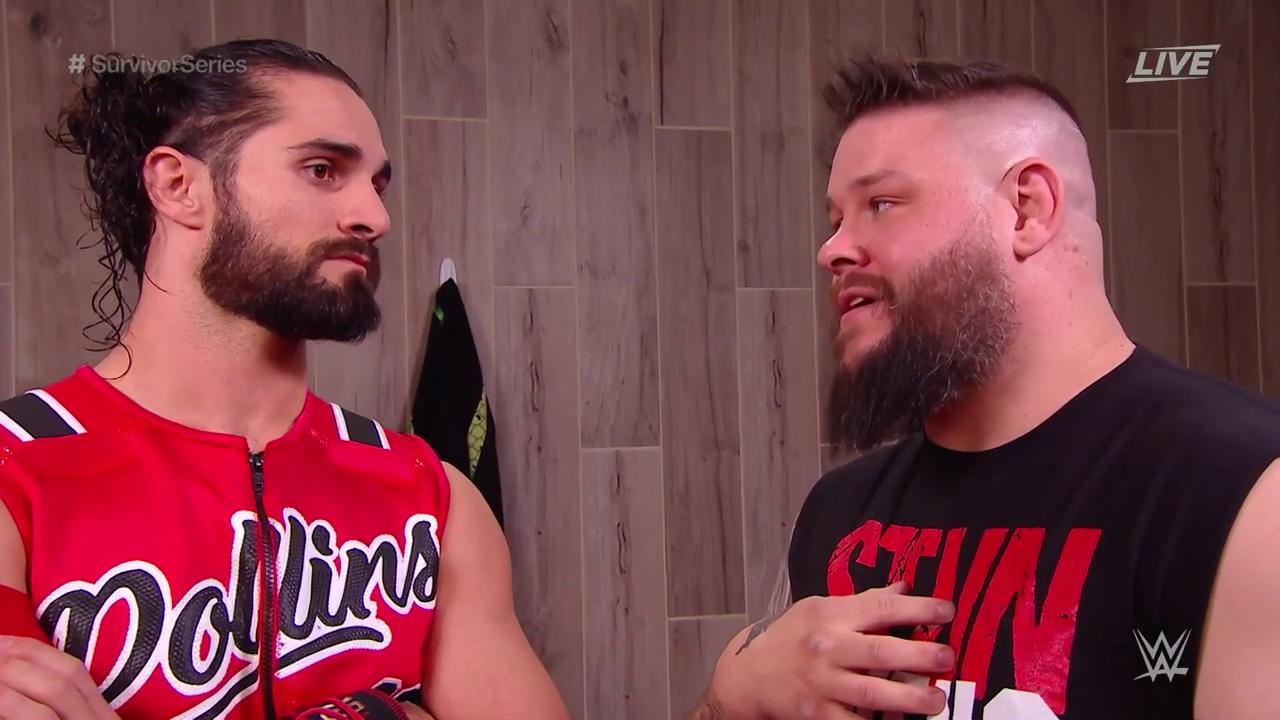 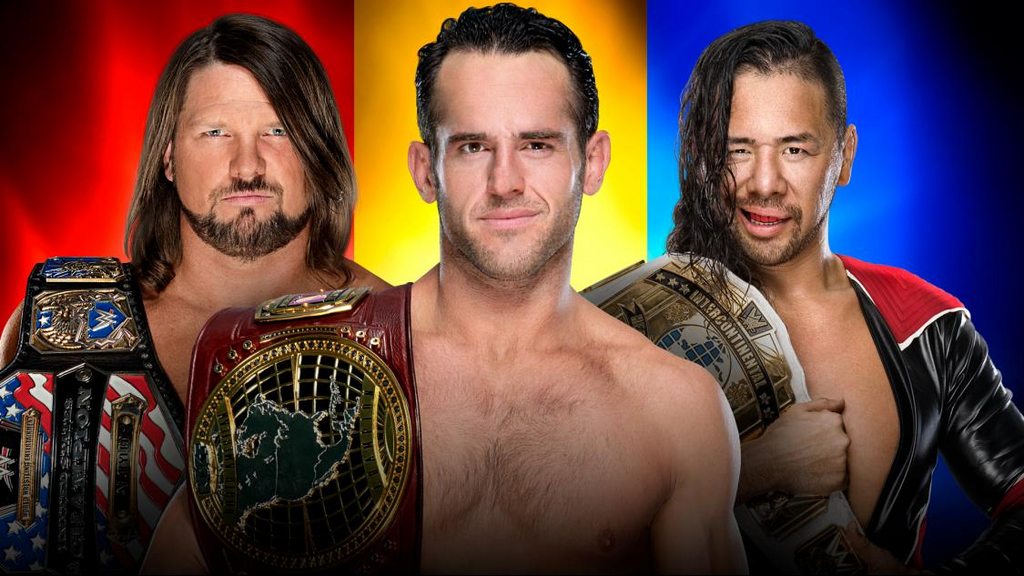 A few minutes in, Styles went for the Styles Clash on Nakamura, but Strong kicked Styles in the head. The crowd was dead. Styles picked up Strong on his shoulders, and Nakamura flew off the top with a flying kick on Strong. Nakamura went for the Kinshasa on Strong, but Styles grabbed Nakamura’s leg from the outside. Sami Zayn then smashed Styles’ head into the ring post.

“Go to Sleep” by Nakamura on Strong. The crowd started chanting “CM Punk.” Nakamura went for the Kinshasa again, but Styles came out of nowhere with a forearm onto Nakamura. Cole keeps calling Nakamura “Shin” and it is pissing me off…

Kinshasa by Nakamura on Strong, but Styles broke up the pin. Styles Clash attempt but Nakamura broke free. Phenomenal Forearm by Styles. He went for the pin, but Strong ran in and tossed Styles out, then stole the pinfall!

Bryan was warming up backstage and The Miz came in and said that Bryan needs to put a stop to the evil, demonic Fiend for all of their sakes. Bryan said “get out of my face.”

Michael Cole mentioned that Mauro Ranallo is not there tonight, saying, “Mauro was so emotional, so passionate last night at TakeOver that he blew his voice out. Mauro will be back this Wednesday on NXT.” 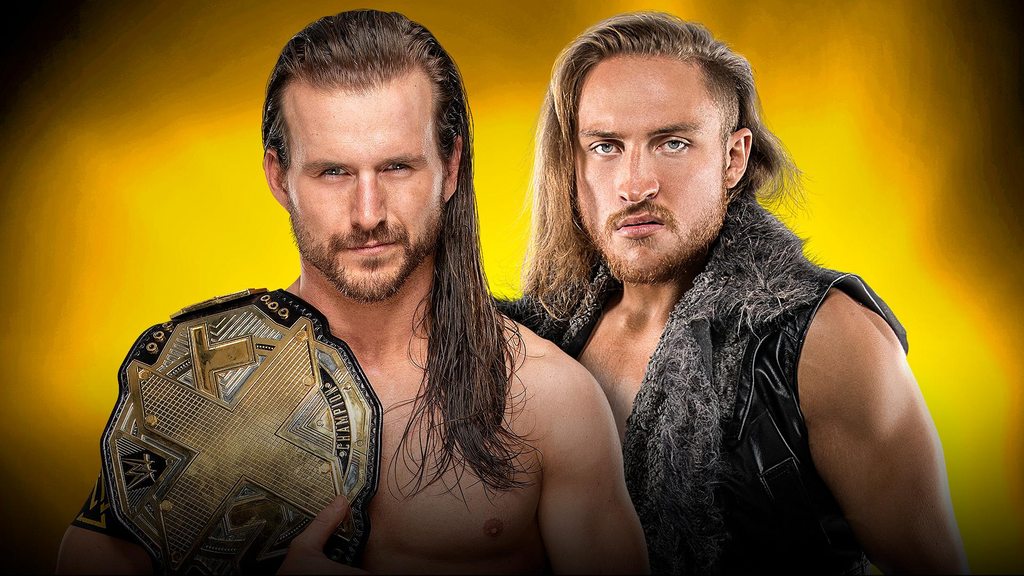 Adam Cole had his ribs bandaged up to sell the punishment he took last night at TakeOver. A few minutes in, Dunne went for a top rope moonsault, but Cole got his knees up, then hit the Last Shot on Dunne, but Dunne kicked out at 2. Cole went for Panama Sunrise, but Dunne moved.

Bitter End by Dunne! But Cole kicked out. Good match. Smatterings of “NXT” chants. Dunne ran and did a backflip off of the top turnbuckle, but Cole kicked him in the face for a near fall. The crowd was dead at the start but came alive.

Panama Sunrise by Cole off the middle rope on the apron! The ref counted to 9 and Dunne made it back into the ring, but was immediately hit with a superkick… 1-2-no. Dunne grabbed Cole’s fingers and “snapped” them then went for the Bitter End, but Cole countered into a Panama Sunrise… then hit the Last Shot. 1-2-3. Great match, best of the night so far easily. 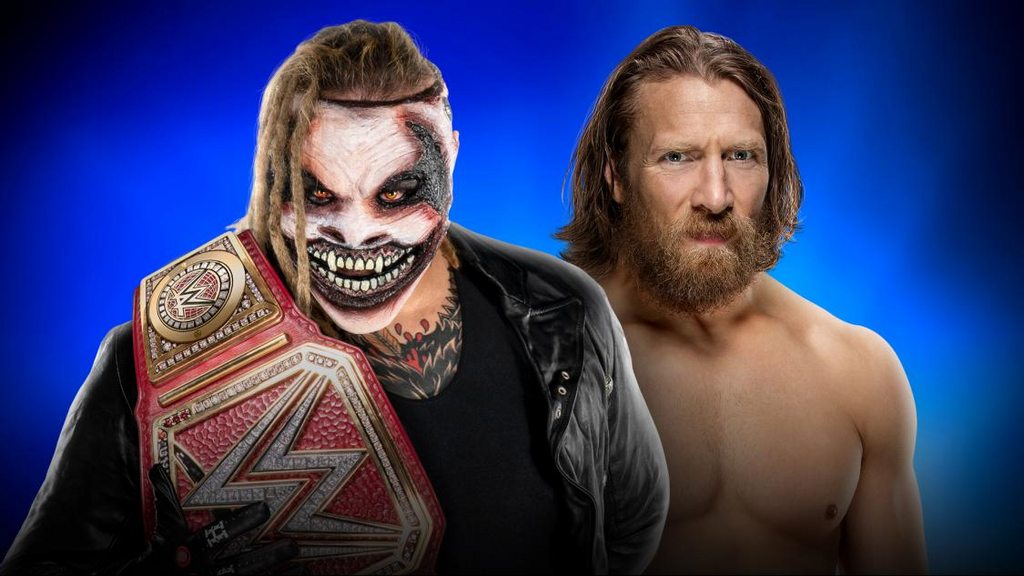 Yes, there was red lighting in this match… Wyatt dominated Bryan for the first few minutes, with the crowd mostly dead. The red lighting is no good and is putting me to sleep and giving me a headache. Wyatt went for Sister Abigail on the outside, but Bryan shoved him into the post. Bryan then jumped off of the top rope onto Wyatt.

Yes kicks by Bryan as the crowd came to life. The Fiend sat right back up. More Yes kicks… and Wyatt got right back up again. A third round of Yes kicks, and he stayed down this time. Bryan stomped on his head repeatedly. Yes chant… Running knee by Bryan, but Wyatt kicked out. 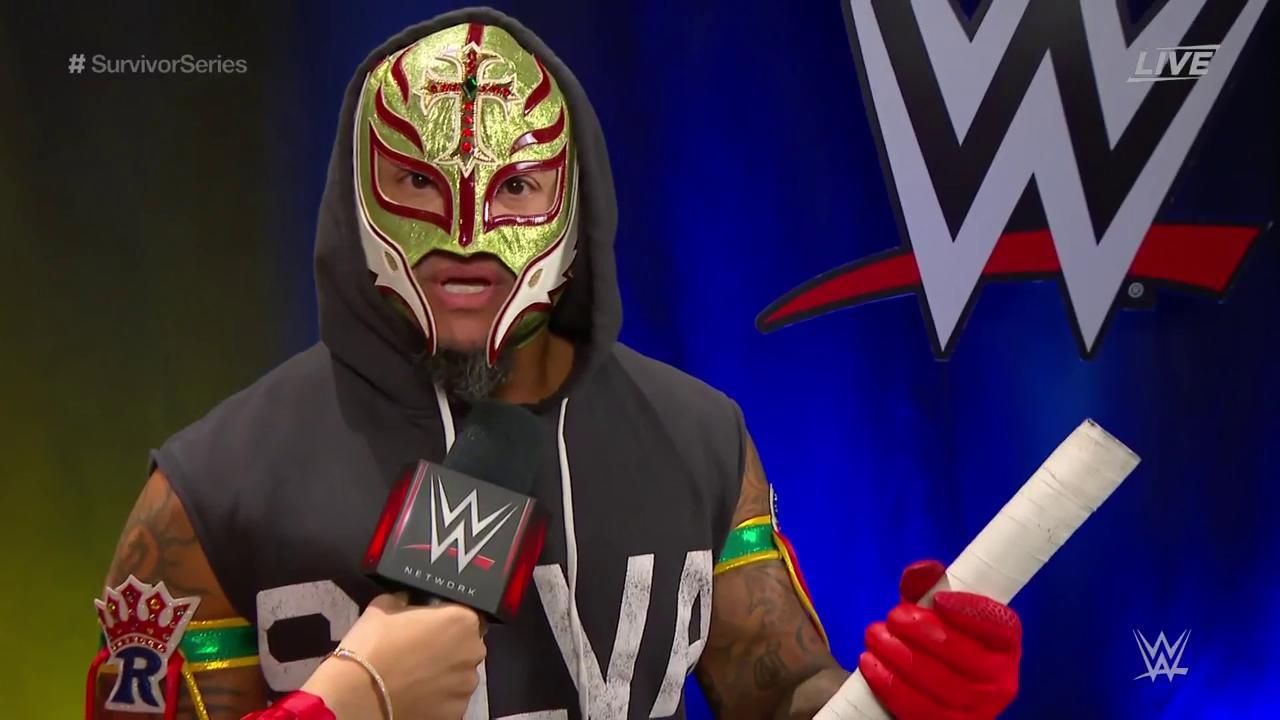 Mysterio was interviewed backstage and said that it’s been 15 years since he last fought Brock Lesnar. Lesnar is the same, but it’s a new Mysterio tonight. Mysterio grabbed a metal pipe. Mysterio said that he was thinking about retiring a few months ago, but he didn’t because of his son Dominick, and he hopes Dominick is watching close tonight as Mysterio takes out Lesnar’s legs with the pipe and takes the WWE Championship. 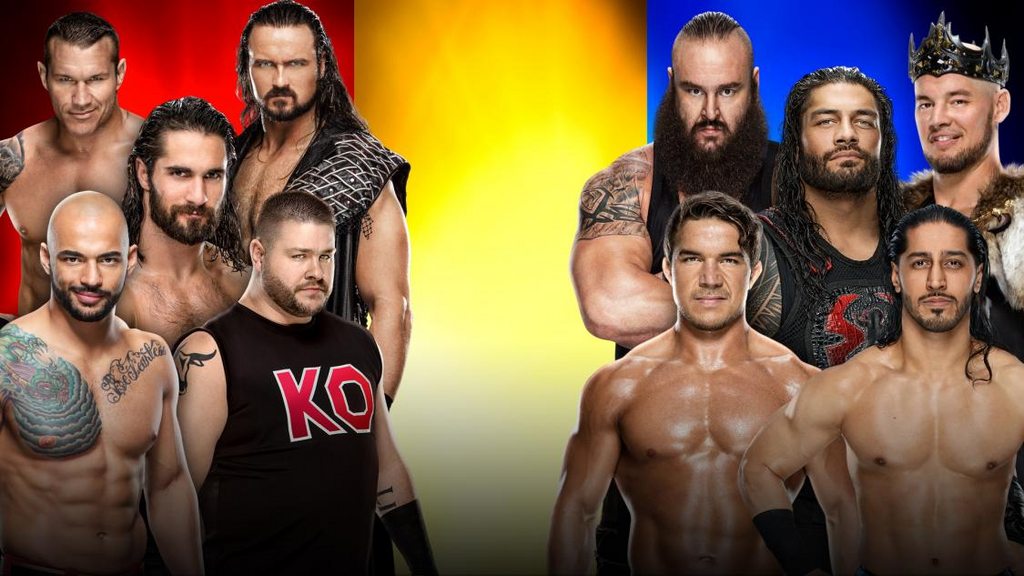 Strowman, McIntyre and WALTER fought early in the match. Walter got a huge pop and “WALTER” chant. Walter attacked Strowman in the corner, then turned around and was met with a big Claymore kick by McIntyre… and he’s out very early… WALTER was eliminated. Huge boos from the crowd and a “bullshit” chant.

Gable hit a sick rolling release German suplex on Ricochet, then Matt Riddle came in to a big pop and chant of “bro.” They exchanged some moves, then stood up and faced off and got a big pop. Ciampa was tagged in and he and Gable both went down, taking each other out. Kevin Owens climbed the top rope then thought about who he should hit with a Frog Splash, Ciampa or Gable… and he hit Gable. Chad Gable was eliminated.

Keith Lee came in, then Braun Strowman, and they faced off to a big pop… but McIntyre ran in and attacked Lee. Strowman took out McIntyre, then ran all around the ring taking out his opponents one by one, then ran into Keith Lee and both men collided and took each other out. McIntyre then hit Strowman with a Claymore on the outside. The ref counted to 10 and counted Strowman out. Braun Strowman was eliminated.

Ricochet hit a sweet dive, but a few seconds later, Corbin hit him with End of Days out of nowhere. Ricochet was eliminated. Nonstop action and the crowd is really hot, this is great. Ali tried to get into the ring, but his teammate Corbin grabbed him and they started argued on the outside, with Corbin yelling at Ali about something, and with the distraction, Rollins hit Ali with a stomp. Ali was eliminated. Corbin shouted “that’s what you get” at Ali. Reigns yelled at Corbin for costing their team the elimination.

McIntyre went for a Claymore on Ciampa, but was caught with a spear by Reigns. Drew McIntyre was eliminated. Rollins was the last member of Team Raw in the match. Remaining: Rollins for Raw, Reigns and Corbin for SmackDown, Ciampa and Lee for NXT. Ciampa hit Reigns with a draping DDT, then went for the Fairytale Ending, but Reigns countered into a Superman punch. Corbin got involved in the match and suddenly, Reigns nailed Corbin, his own partner, with a Superman punch, then a spear! Ciampa looked confused but pinned Corbin. King Corbin was eliminated.

Rollins and Reigns went to give Ciampa a Shield powerbomb through an announce table, but Keith Lee ran to make the save. In the ring, Ciampa hit Project Ciampa on Rollins, but Rollins kicked out. Fairytale Ending attempt by Ciampa, but Rollins countered into a superkick, then a stomp attempt, but missed. Ciampa went for the Fairytale Ending again, but Reigns nailed Ciampa with a Superman punch. Stomp by Rollins on Ciampa… Tommaso Ciampa was eliminated. And the crowd booed.

One man remaining for each team. Reigns, Rollins and Keith Lee. The crowd chanted “Oh, bask in his glory.” Lee hit a crossbody on both Reigns and Rollins, but Rollins got up and hit him with a superkick, then a Frog Splash, but Lee kicked out. Crowd chanted “NXT.” Rollins screamed at the crowd, “I built NXT! I built it and I’ll tear it down!” He ran at Lee for a Stomp, but Lee countered into a Ground Zero (Jackhammer)!!! 1-2-3. Seth Rollins was eliminated.

Keith Lee and Roman Reigns remained and faced off. Two Superman punches… Reigns pinned Lee and got very close to three. Graves shouted that the ref counted 3. Reigns ran at Lee for a spear but Lee picked him up… sit out powerbomb!!! 1-2-no! Lee went to the middle rope for a moonsault, but Reigns moved! Spear by Reigns! 1-2-3. Keith Lee was eliminated.

Awesome match and the crowd was on fire. After the match, Reigns looked at Lee then gave him a pound in a show of respect as the crowd applauded. 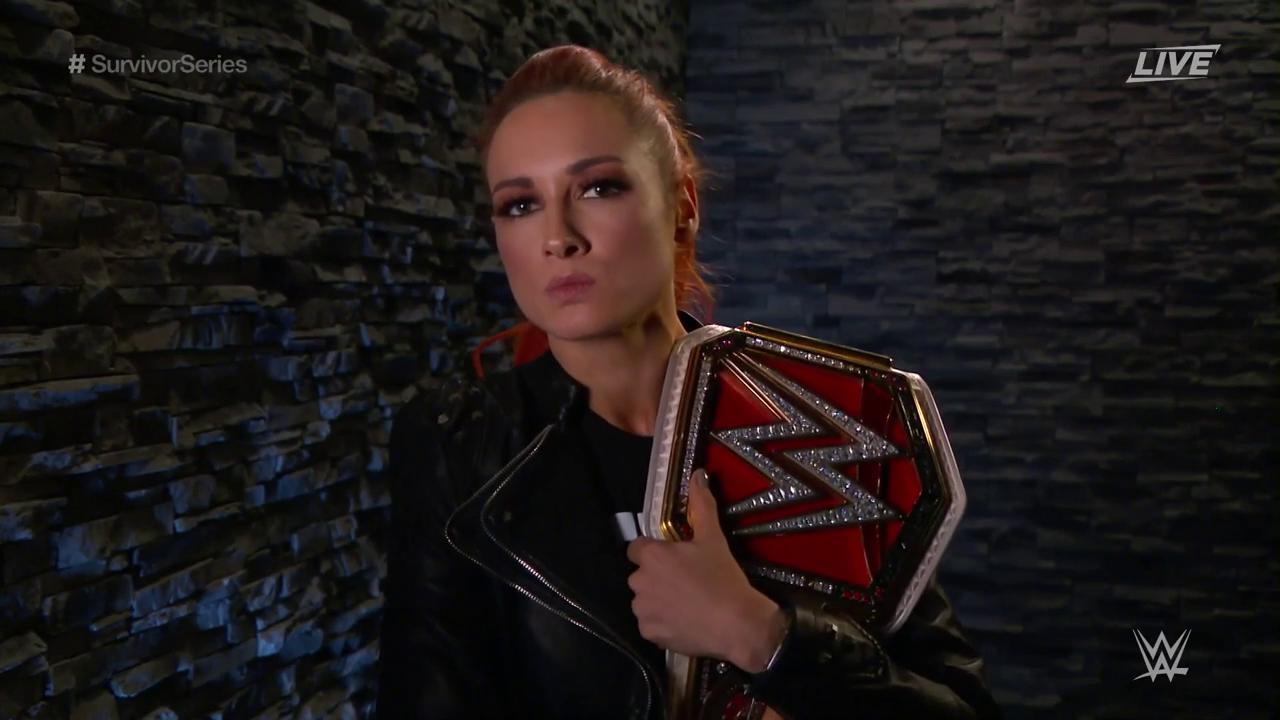 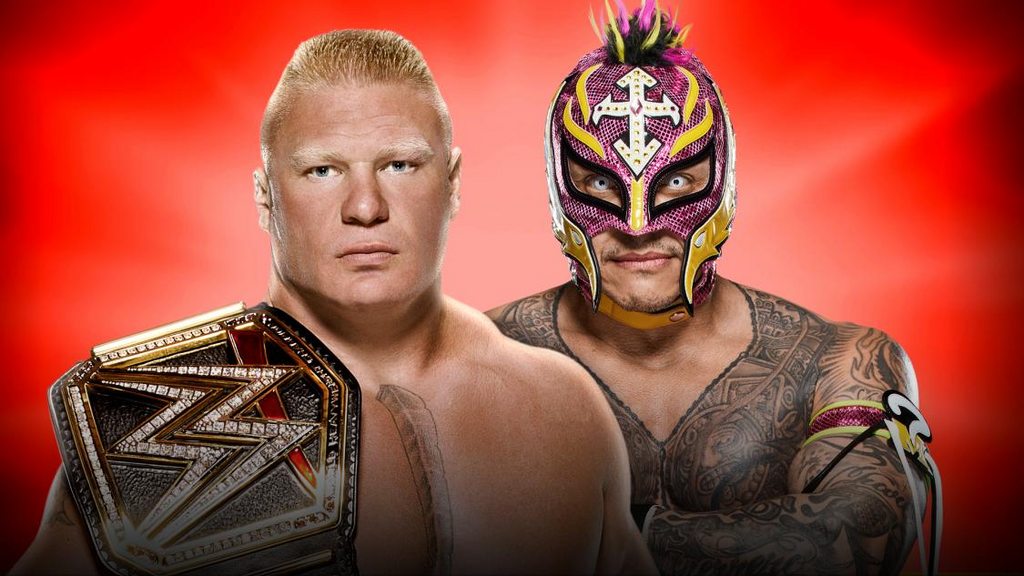 Mysterio was dressed as a clown… The bell rang and Mysterio immediately grabbed a metal pipe from under the ring. Mysterio chased after Lesnar, but Lesnar was able to stomp on the pipe and take control of the match. He tossed Mysterio violently to the outside, then tossed him into the Spanish announce table, then hit him with an overhead belly to belly onto the top portion of the announce table.

In the ring, Lesnar gave Mysterio a vicious German suplex, with Mysterio’s lower back landing right on the pipe, seemingly accidentally. Lesnar hit another German suplex, then grabbed the pipe…

Suddenly, Rey’s son Dominick ran in with a white towel and begged Lesnar for mercy… Lesnar grabbed the towel and tossed it out of the ring, then grabbed Dominick by the throat… Mysterio came up from behind and hit Lesnar with a low blow! And a low blow by Dominick! Mysterio nailed Lesnar with the pipe. Dominick ran in and hit Lesnar with a steel chair! Double 619 by Mysterio and Dominick on Lesnar! Frog splash by Dominick off the top! Then Rey hit a frog splash! They both went for the pin at the same time, but Lesnar kicked out.

Dominick and Rey both went to the top rope again on opposite sides of the ring. Lesnar suddenly jumped up and grabbed Dominick and hit him with a big German suplex. Rey ran at Lesnar, but Lesnar nailed him with an F5! 1-2-3…

The crowd was on fire and the air was taken out of them with Lesnar’s win. Really fun match. 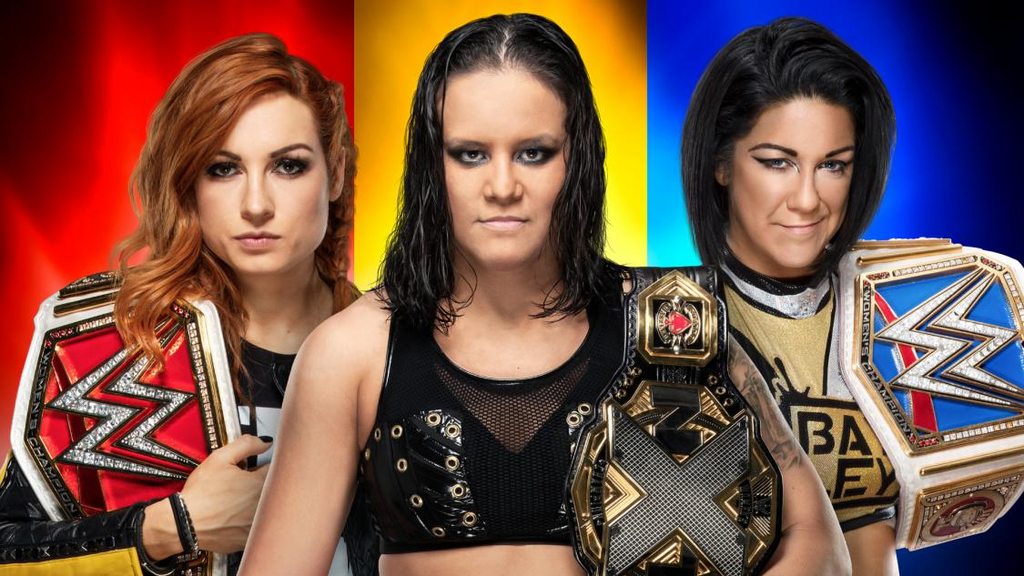 The crowd sounds dead. Not sure about this as the main event, unless there’s some sort of angle planned for the end…

Very boring first few minutes and the crowd was almost silent. After a few minutes, Becky locked on the Dis-Arm-Her on Bayley, but Shayna broke it up. Bayley to Belly on Baszler out of nowhere, but she kicked out. No response from the crowd. Smatterings of “CM Punk” chants. Not good.

After the match, Baszler celebrated on top of the announce table with her NXT Women’s title. Becky Lynch suddenly got up and attacked her and gave her a leg drop off of the crowd barricade through the German announce table. Becky grabbed her title and climbed on the other announce table as her theme music hit and the show went off the air. Very underwhelming finish to an otherwise really good PPV.