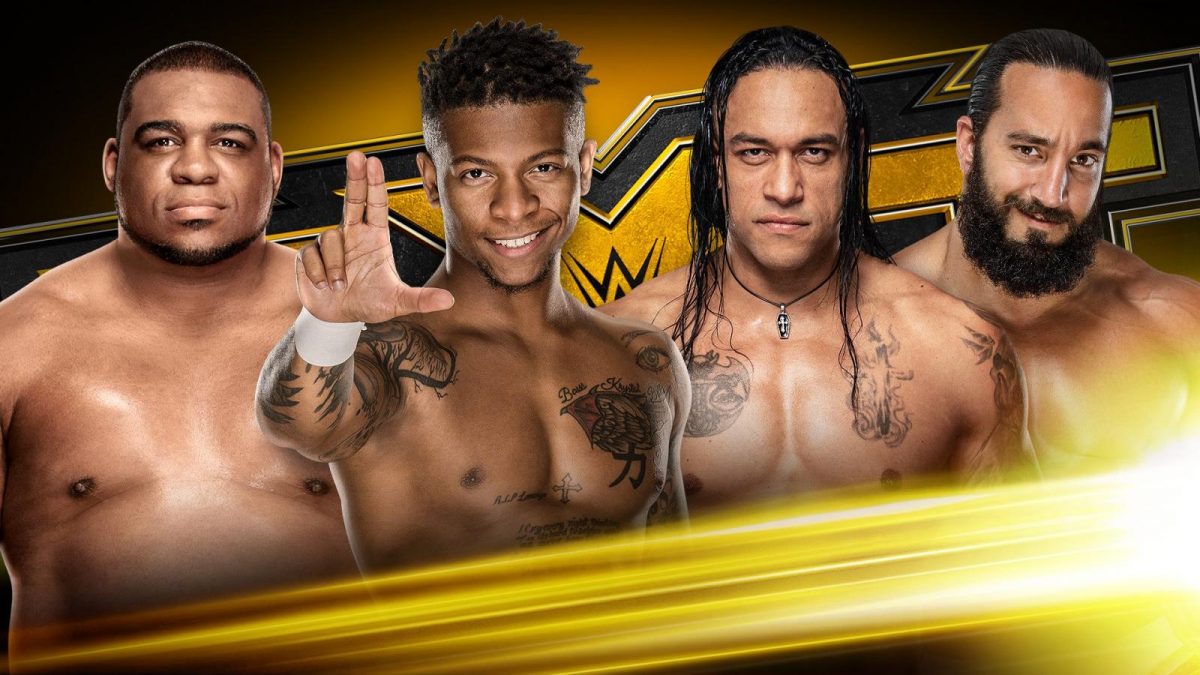 We go to Winter Park, Florida for Mauro Ranallo and Nigel McGuinness.

Roderick Strong is singing in the back and he says he is a giving man so the North American Championship will be defended against a worthy competitor. They will get a Season’s Beating.

We go to Brooklyn, New York and your announcers are Tom Phillips and Beth Phoenix.

We are told that Undisputed Era will face Imperium in the main event of Worlds Collide.

They lock up and Blackheart backs Belair into the corner and Shotzi with a clean break. She offers her hand and Bianca slaps it away and she pushes Shotzi to the mat. Shotzi with an arm drag and a second arm drag. Shotzi with a top wrist lock and bridge. Belair escapes and hits a splash. Belair with a shoulder tackle. Shotzi goes for a sunset flip but Bianca does not go over. Bianca blows a bubble and Shotzi slaps her and bursts the bubble. Shotzi gets a near fall.

Blackheart goes up top and misses a double stomp and rolls through. Belair avoids a kick and Belair gets Blackheart up for the KOD and the three count.

Nese and Rush start things off but Nese decides to tag in Priest before locking up. Priest wants to face Lee, but Rush says he will face someone his own size. Priest grabs Rush by the throat and Rush slaps Priest. Rush kicks Priest away as he avoids the bigger man. Rush has a kick blocked and Rush is flipped into his corner. Lee makes the tag. Priest removes Lee’s Santa hat and Priest kicks Lee in the leg. Lee misses some strikes and Priest avoids a few strikes. Lee with a running cross body to Priest. Nese comes in and Rush throws cookies at Rush and Nese goes after Rush. Rush leaps over the announce table and then Lee POUNCES Nese over the announce table.

Lee with another clothesline. Lee gets a near fall. Lee sets for a power bomb but Priest lands on his feet. Nese makes the blind tag and Lee sends Priest to the apron. Priest with a kick and Nese with a double jump moonsault for a near fall. Lee runs Nese into the corner and Rush tags in and Rush with a spingboard head scissors. Nese with a matrix and kicks but Rush with strikes and a back heel kick. Lee tags in but Priest pulls Lee off the apron. Priest catches Rush on a suicide dive and Priest with a choke slam on the apron. Priest sets for Rush and Lee rises in the corner and sends Priest over the top rope. Nese goes for a suicide dive and Lee is about to put Nese on his knee to ask him what he wants for Christmas but he sends Nese into the ringside barrier. Lee catches Priest on a flip dive and Lee sends Priest into Nese and then power bombs Priest on the apron.

Lee with a jackhammer to Nese and Lee lets Rush tag in to hit the frog splash off Lee’s shoulders. Rush gets the three count.