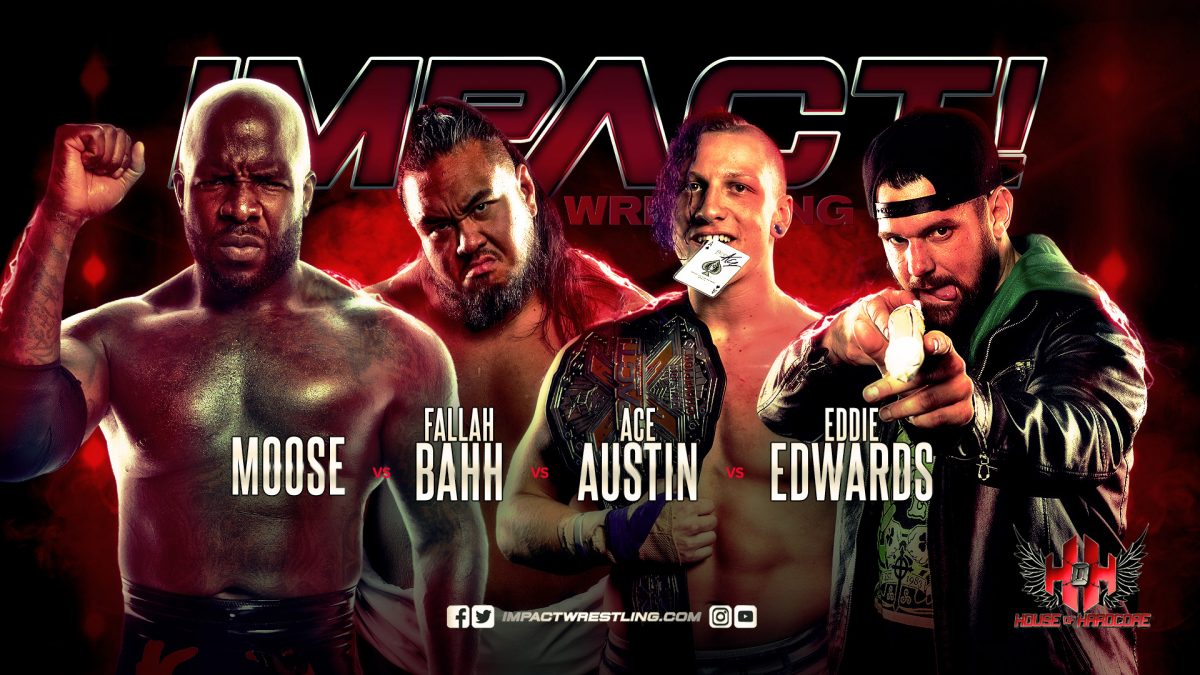 Anything goes in this four-way tag team match featuring some of IMPACT Wrestling’s top tag teams.

Luster hits Dez with a German suplex, followed by a double foot stomp from Thornstowe. Wentz breaks up the pin attempt at two. Shera powerslams his owner partner Rohit on top of TJP. It doesn’t take long for TJP to get back in the action as he hits a crossbody off the top on both members of the Desi Hit Squad. There’s a flurry of high-flying offense to the outside. Wentz launches himself off the top rope, hitting Daga with a Swanton. Shera connects with Sky high on Dez to win.

Moose reflects on his victory over Rhino in a No Disqualifications match at Hard To Kill. Tonight, he competes in a four-way match from a House of Hardcore event against X-Division Champion Ace Austin, Eddie Edwards and Fallah Bahh.

Speaking of Ace Austin, he successfully defended his X-Division Championship at Hard To Kill against Trey of the Rascalz. Backstage, Ace is on the phone with his manager and demands more money for being the self-proclaimed face of IMPACT Wrestling.

Last Friday at at the Brewery 2 on IMPACT Plus, Rich Swann suffered an ankle injury in the 8 Person Elimination match, preventing him from joining forces with Willie Mack to challenge The North for the Tag Team Championships at Hard To Kill. Willie had to go it alone in a handicap match and almost pulled out the upset but in the end, The North were too much for him to overcome.

Backstage, Willie Mack is disappointed he couldn’t get the job done but Rich Swann says he should be proud that he almost defeated the Tag Team Champions on his own.

Eddie Edwards retained his Call Your Shot Trophy in an incredible contest against Michael Elgin at Hard to Kill.

.@TheEddieEdwards proved he was #HardToKill against @MichaelElgin25 and he plans to do it again tonight in the four way. #IMPACTonAXSTV pic.twitter.com/CF6PWuy11Q

Michael Elgin speaks on his time wrestling for Pro Wrestling Noah in Japan and how much it means to him and his career.

Here is a special look at his trip. #IMPACTonAXSTV pic.twitter.com/DGgsiBZvJP

At Hard To Kill, RVD severely injured Brian Cage after a brutal Van Terminator with a steel chair. Daga came to the aid of Cage, leading to a special bonus contest.

Ken Shamrock explains what his key to victory was when he stepped into the ring with Madman Fulton at Hard To Kill.

.@ShamrockKen thinks @FultonWorld has all the talent in the world, if he gets out from under @TheSamiCallihan. #IMPACTonAXSTV pic.twitter.com/Hi7lK0WqPs

Right off the bat, Joey wants Swinger to touch it but Swinger refuses. Swinger gains control with a clothesline. Swinger begins to wear Joey down with a hard Irish whip into the corner. Swinger drops his head on “it” but it damages Swinger more than it does Joey. Swinger goes for the Swinging Neckbreaker but Joey counters and successfully makes him touch it. Joey sends Swinger for a ride but Swinger holds on to the ref, bringing him along with them. Joey goes for the pin but the referee is laid out. Joey puts his lollipop in Swinger’s mouth, followed by Sweet Tooth Music to win.

In a historic main event, Tessa Blanchard defeated Sami Callihan for the World Championship at Hard To Kill, becoming the first woman to hold the IMPACT World Title.

Moose vs. Eddie Edwards vs. Fallah Bahh vs. Ace Austin

We head to the 2300 arena in Philadelphia for this next four-way contest presented by House of Hardcore.

Moose hits Fallah with a step-up crossbody in the early going. Fallah comes right back as he exchanges shots with Moose. Eddie repeatedly chops Ace in the corner. Fallah and Moose join the fray but Eddie hits them with a series of chops as well. Fallah dives through the ropes, crashing into Moose and Ace on the floor. Eddie launches himself off the top rope into everyone at ringside. Moose connects with a thunderous Superplex to Fallah. Ace takes Fallah off the top rope with a Super Fold to win.

We see Tessa Blanchard’s post-match celebration after she defeated Sami Callihan to become the first woman to hold the IMPACT World Championship at Hard To Kill.

Josh Mathews sits down with Tessa for an interview at Skyway Studios is Nashville. Sami Callihan interrupts via live video feed and claims Tessa may be the champion the fans want but he is the champion they need. Tessa lays out a challenge for Callihan to fight her again anytime, anyplace. Callihan reveals that he is in the same building as Tessa and she begins to search for him. Callihan once again appears on screen and threatens Tessa that the attack won’t be tonight but when it happens, she’ll never see it coming.