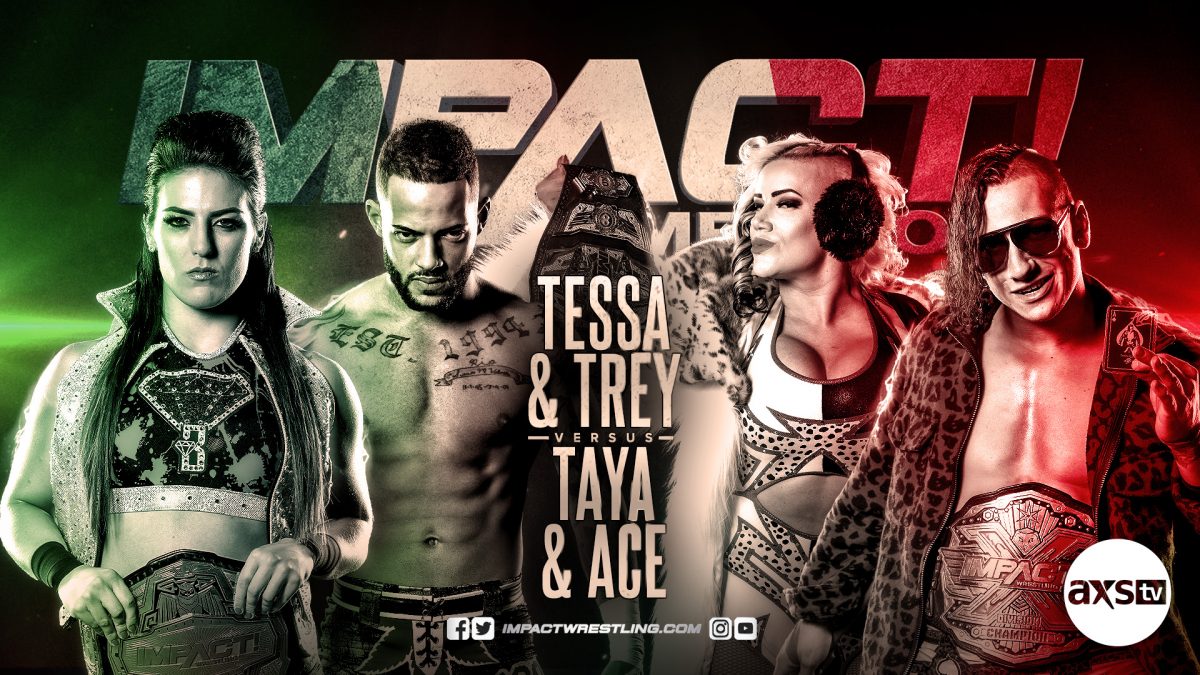 IMPACT! is back in Mexico City as new World Champion Tessa Blanchard makes her way to the ring. Tessa says winning the World Title is only the beginning. She mentions that Sami Callihan has a rematch and calls him out right here, right now. Instead of Callihan, the longest-reigning Champion Taya Valkyrie confronts Tessa. Taya recalls defeating Tessa in the past and says she is the true history maker while Tessa winning the World Title was only a consolation prize. They stare down in the middle of the ring when X-Division Champion Ace Austin interrupts. Ace also recalls how Tessa was unable to defeat him for the X-Division Championship when they were involved in a Ladder match at Bound for Glory. Tessa attacks Ace but falls victim to the numbers game when Taya joins the fray. The last challenger to the X-Division Title, Trey, makes the save and evens the odds, sending Ace and Taya retreating.

Jimmy Jacobs sits down with Willie Mack after he showed tremendous courage taking on both members of The North with the Tag Team Championships on the line at Hard To Kill. Jimmy notes that his tag team partner Rich Swann will be out with an ankle injury for quite some time. Willie will turn his attention to singles competition when he faces Rohit Raju of the Desi Hit Squad tonight. Johnny Swinger interrupts and offers to partner with Willie but he refuses.

Backstage, Madison Rayne and Kiera Hogan remind Taya Valkyrie that she owes them shots at the Knockouts Title for helping them in the past. Taya is preoccupied tonight but says that if Madison and Kiera face each other next week, she will face the winner first and the loser second.

Moose vs. Rhino vs. Taurus

Three animals go to war here in Mexico City. Moose quickly retreats to the outside in the early going. Rhino is setting up for the Gore on Taurus when Moose trips him up from the outside. Rhino and Taurus team up on Moose, taking him out with double back elbows. Moose turns it around with Go To Hell on Taurus. Moose attempts the No Jackahmmer Needed Spear but Rhino counters into a belly-to-belly suplex. Moose uses the referee as a human shield to avoid the Gore, just like at Hard To Kill. Rhino attempts it again and is successful on the second attempt. Taurus head butts Rhino and pins Moose to steal the win.

Gabby Loren interviews Jordynne Grace backstage. Jordynne reminds everyone that she was not pinned in the Knockouts Title three-way at Hard To Kill. Jordynne claims that if Kiera and Madison are having a contenders match next week, she will be part of it.

.@JordynneGrace wants in on the number one contendership match NEXT WEEK on IMPACT. #IMPACTonAXSTV pic.twitter.com/JlzUGHnmFu

Joey Ryan is once again summoned to Wrestler’s Court by Tommy Dreamer but refuses to go.

Another summons to Wrestler's Court gets a big ol' NOPE from @JoeyRyanOnline. #IMPACTonAXSTV pic.twitter.com/lsTzf3Z1YM

IMPACT Wrestling takes on Lucha Libre AAA in this matchup. Joey tells Maximo to touch it but like most, Maximo knows better and goes on the attack. Maximo launches himself off the top and hits an elbow drop. Maximo attempts an Atomic Drop but it ends up hurting him more than Joey. Maximo kisses Joey, allowing him to score a very close near fall. Joey connects with Sweet Tooth music to win.

RVD and Katie Forbes join Gabby Loren in the backstage area but instead of answering her question, RVD accuses Joey and Maximo of stealing his moves.

Michael Elgin declares that his rivalry with Eddie Edwards is far from over.

.@MichaelElgin25 is NOT happy with the result of his match with @TheEddieEdwards at #HardToKill – he insists Eddie tapped out. #IMPACTonAXSTV pic.twitter.com/hfyd6OJCP4

The next chapter of the Dark War is set to unfold in Mexico City. Rosemary launches herself off the apron, taking out Havok with a Hurricanrana on the floor. They fight up the ramp where Havok hits a vicious Samoan Drop on the unprotected steel. Rosemary gains momentum with a series of running strikes, followed by the Slingblade. Instead of going for the follow-up pin, Rosemary is distracted by the presence of Mitchell at ringside. He gets up on the apron but Rosemary blinds him with the green mist. Havok capitalizes off the distraction and hits the Tombstone to win.

While Havok tends to Mitchell, Susie is nowhere to be found.

Shera informs Gama Singh that he sent his son Raj away on a spiritual journey. Gama criticizes Shera for doing that without consulting him first but Shera says he doesn’t have too. Gama slaps Rohit Raju for no apparent reason.

In the Treehouse, the Rascalz party with stars from Lucha Libre AAA.

An altercation breaks out between Eddie Edwards and Michael Elgin in the back.

Michael Elgin and Eddie Edwards will begin a Best of 5 Series next week on IMPACT!

Willie takes control with a Hurricanrana. Shera distracts Willie from the apron, allowing Rohit to roll him up for a near fall. Willie sets up Rohit in the corner but Shera pulls him to safety. Willie soars through the air and takes them both out on the floor. Willie connects with a Standing Moonsault but Rohit kicks out at two. Rohit misses the double foot stomp off the top. Willie hits the Stunner to win.

Shera attacks Willie from behind after the match. Johnny Swinger makes his way to the ring and shockingly, attempts to aid Willie. Shera is too much for Swinger as he ends up getting taken out with a Sky High powerbomb.

El Hijo del Vikingo challenges reigning Tag Team Champions The North to a match next week after they flaunt their 2 on 1 victory over Willie Mack at Hard To Kill.

Trey is about to fly when Taya stops him. Instead, Trey and Tessa take to the skies and hit in-sync dives on both of their opponents. Taya and Tessa brawl on the outside. In the ring, Ace hits Trey with a big roundhouse kick for a two count. Taya wears down Trey on her side of the ring, preventing him from getting the tag to Tessa. Ace illegally chokes Trey behind the referees back. Trey builds momentum with a big kick. Trey tags in Tessa but the referee is distracted by John E Bravo and doesn’t see it. Trey finally makes a successful tag to Tessa who goes on the attack. Trey hits a springboard Flatliner. Tessa takes out Taya on the floor. Meanwhile, Ace connects with The Fold on Trey to win.