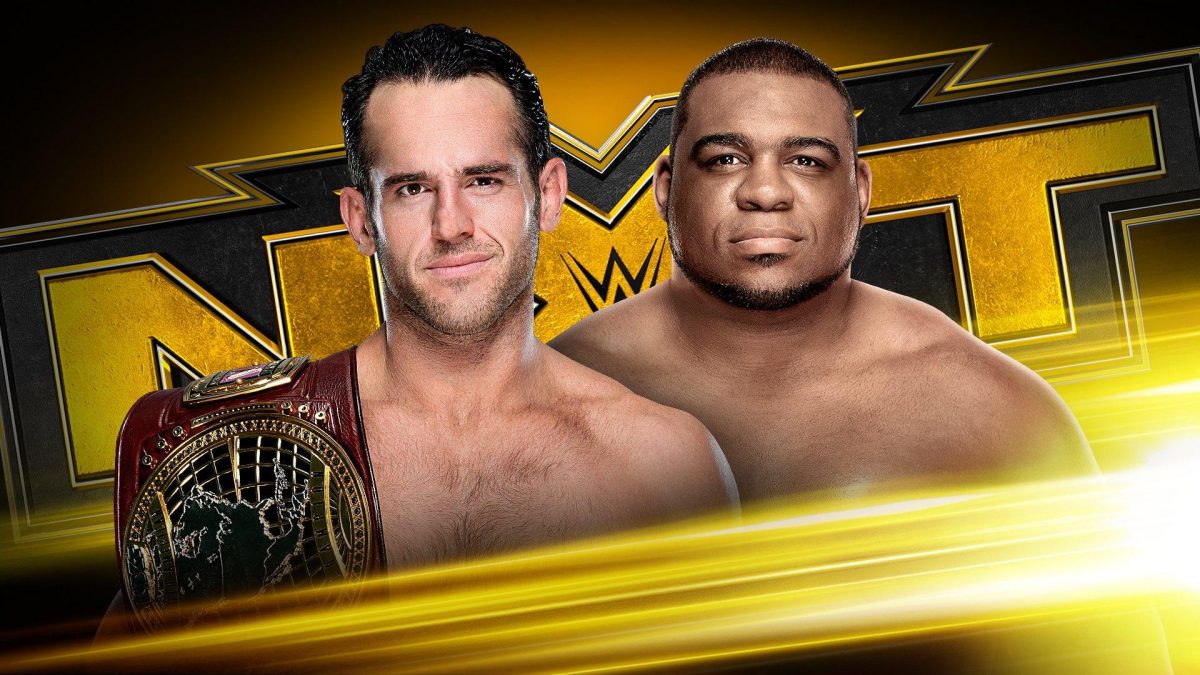 Cole gets on the apron and he distracts Drake long enough to allow Kyle to send Drake to the turnbuckles. Kyle with a leg sweep. Drake with an ankle lock. Fish tags in and he connects with back elbows and punches to both men. Fish with kicks to Drake and Gibson followed by an exploder of Drake into Gibson. Gibson goes for a Codebreaker off the turnbuckles but Fish counters and applies a heel hook. Drake allows Gibson to get ot the ropes. Fish with an exploder to Gibson. Fish misses a moonsault and Drake tags in. Drake with a running drop kick and Gibson with Helter Skelter for a near fall.

The music for Imperium plays and Kyle and Bobby look around instead of worrying about the match.

We see Imperium on the Game Deck. Gibson pulls Fish to the floor and sends him into the guardrails. Drake pins Kyle after Ticket to Mayhem.

After the match, Undisputed Era is in the ring complaining about what happened.

She says people are talking about her because she eliminated Shayna Baszler. That is what she does. You can’t outcrazy Shotzi Blackheart. She has a devil may care attitude and a big pair of cajones. Wait until she beats Shayna tonight.

After the match, Bianca continues the attack on Storm and then she knocks Io off the apron. Bianca with a butterfly gourdbuster.

Rhea Ripley’s music plays and she makes her way to the ring. Bianca with a double leg take down and Rhea with punches. Io with a springboard drop kick to Rhea. Bianca goes to the floor when Io moves. Io with an Asai Moonsault onto Bianca and Rhea. Storm with a suicide dive onto Io.

We go to Undisputed Era in the back and Cathy says that Imperium wanted to make a statement.

Kyle asks if they wanted to make a statement or a stupid comment. If it wasn’t for Imperium, they would be two time Dusty Rhodes Tag Team Classic winners. Cole says they need to focus on Keith Lee and make sure Roddy stays champion. Imperium will pay, whether it is tonight or at Worlds Collide.

We are back with Ilja Dragunov talking about what Finn Balor said about him. Ilja says he is driven to beat Finn. You will feel a thousand strikes and it will feel like the sky is falling. The people will know that he is not Finn Balor. He is Invincible. He will not miss. 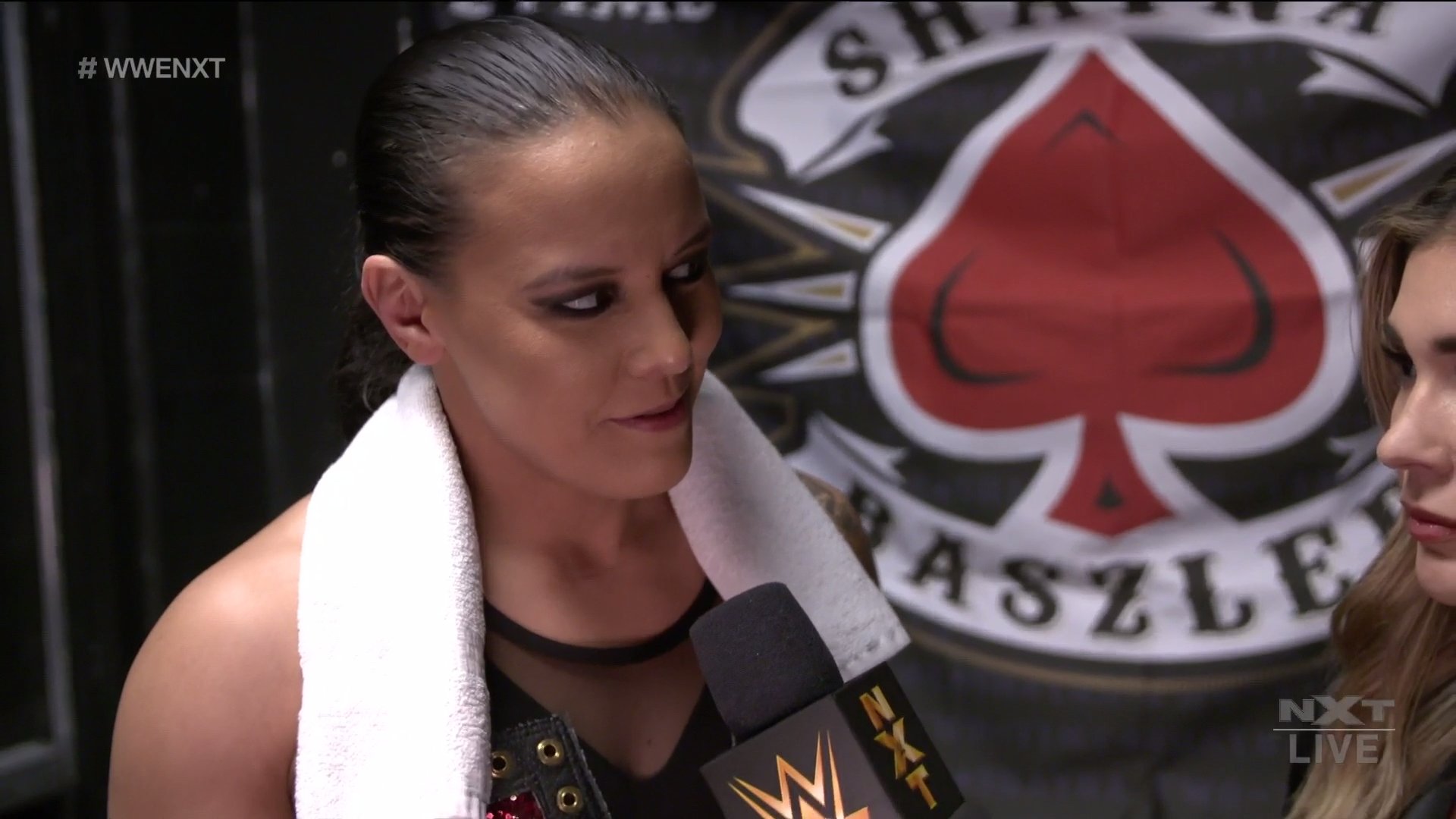 We go to Shayna Baszler with Cathy Kelley. Shayna is asked about facing Shotzi Blackheart. Shayna says Shotzi thinks she made a statement but she just ended her career before it started. If she has to go through every girl in that locker room, she will until she becomes Shayna Three Times. It starts tonight with Shotzi.

After the match, Shayna refuses to release the hold until forced to do so by the referee.

We go to Tegan Nox. She says since June 1, 2017, she has been best friends with Dakota Kai. She was excited that Dakota was going to get her chance in WarGames, but then something changed. Dakota says Tegan is not as good as she thinks. You didn’t have my back. Tegan saw Dakota in the battle royal and she knew she had to be in it. Dakota knew that she was not going to be in the match but she was going to eliminate her. Tegan says she will end Dakota and she will enjoy every minute of it. Dakota says that Tegan is due for another injury.

Angel Garza is asked about his first title defense on Saturday. Angel says when you are as good as him, he does not feel pressure. It does not matter who is coming from NXT UK, he will beat them. Swerve thinks this is his house, but Angel says he is the champion so it is his house.

WALTER comes to the ringside area and distracts Dunne long enough to allow Barthel to hit a running European uppercut that sends Dunne into the ring steps. Aichner with a running knee against the ring steps as we go to commercial.

We are back and Dunne punches Barthel but Barthel with enzuigiris and a suplex. Dunne with a forearm as Barthel comes off the turnbuckles. Aichner tags in and keeps Dunne from making the tag. Dunne’s knee gives out as he tries to flip over Barthel and Aichner. Dunne with an enzuigiri to Aichner. Riddle tags in and hits a series of punches and kicks. Riddle with an exploder to Aichner and then to Barthel. Riddle with back sentons to Aichner and Barthel. Riddle with a kick to Barthel and a fisherman’s buster to Aichner.

Dunne tags in and they stomp on the hands and hit stereo knees for a near fall. Riddle gets Aichner up and Aichner sends Riddle into Dunne. Barthel and Aichner with stereo drop kicks to Riddle for a near fall. Riddle with knees to Aichner and Barthel. Dunne tags in and he flips over Aichner but his knee gives out. Aichner with a DDT off the turnbuckles. Dunne goes for a victory roll but Barthel drops down. Riddle with a knee. Riddle is sent to the floor by Barthel. Aichner tags in and Dunne is put on the turnbuckles and Barthel sends Dunne to Aichner for a delayed vertical suplex but Dunner counters with a double wrist lock. Riddle with an ankle lock on Barthel and then Barthel with a kick to Riddle. Riddle with a knee to Barthel.

After the match, Zack Gibson and James Drake come out. Zack says we have our finals. The Grizzled Young Veterans face the Jokers. Zack says he wants to talk to Pete Dunne directly. The Full Sail Neckbeards think you are the best to come out of NXT UK, but we all know that you are the most selfish. Every time they have tried to improve themselves, you have been the road block. Next week, we will take you out and take the trophy to Liverpool.

Matt takes the mic and says BRO. He doesn’t know what Zack said, but he heard about manipulating a joint. Matt lost focus and started daydreaming.

Pete says while Matt was up in the clouds, they reminded everyone that when they step in the ring with him, they have lost. Next week, you lose and the Broserweights walk out with that trophy.

Strong with forearms but Lee with punches. Both men are down after a head butt. Lee goes to the turnbuckles but Strong grabs the leg to stop Lee. Strong sets for an Olympic Slam off the turnbuckles but Lee blocks it. Lee with an elbow to send Strong to the mat. Strong with a forearm to the injured leg and Strong hits the Olympic Slam from the turnbuckles and both men are down. Strong gets a near fall but Lee holds on to Strong when he kicks out. Lee blocks a jumping knee and Lee with a chop. Lee with a running shoulder tackle that sends Strong over the top rope to the floor.

Lee with a running clothesline for a near fall. Lee goes back to the turnbuckles for a moonsault and Lee misses when Strong moves. Strong with an ankle lock and he grapevines the leg and kicks Lee in the back. Lee crawls to get to the ropes and Lee gets there to force Strong to release the hold. Strong with a chop and forearms. Lee with a forearm and Strong is down. Lee gets Strong on his shoulders and Cole gets on the apron along with Fish and Kyle. Strong with a jumping knee and flying boot for a near fall. Lee with the Big Bang Catastrophe for the three count.

Imperium shows up at ringside and they get on the apron. All eight men are in the ring and they start throwing punches. Cole has a super kick blocked by WALTER and WALTER chops Cole. The brawl continues with all eight men throwing punches. Officials and security get into the ring to try to calm things down but that does not work as we go to credits.