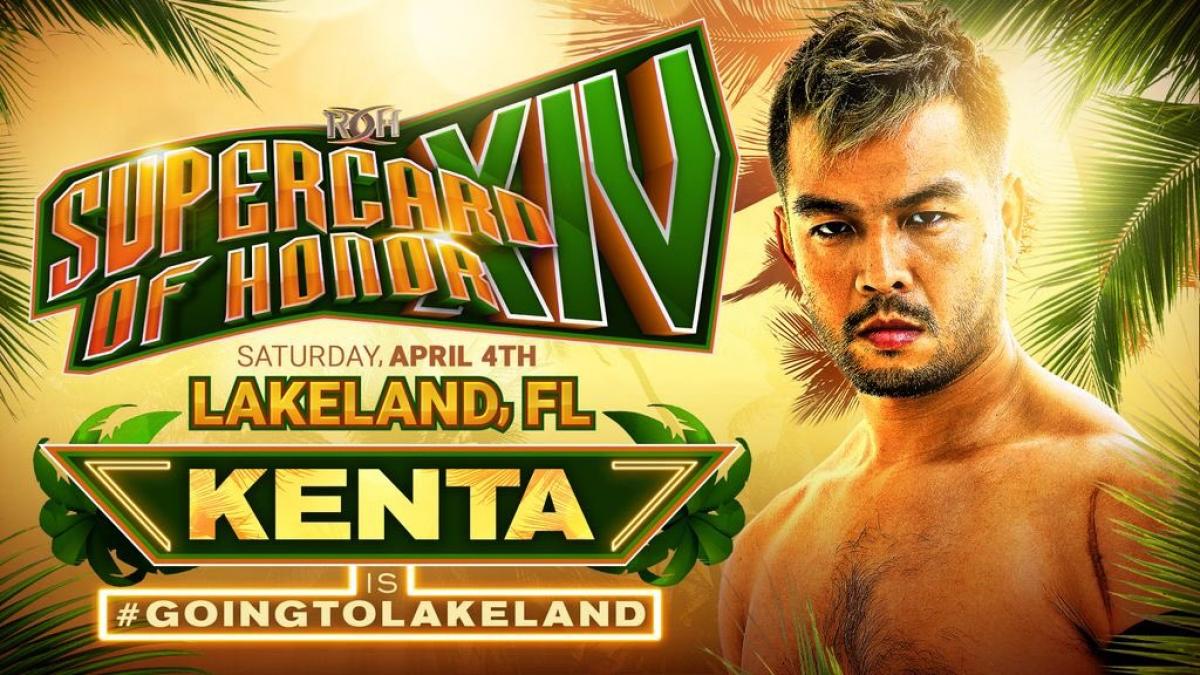 Ring of Honor announced that KENTA will be making an appearance for the company at their Supercard of Honor XIV event on April 4th in Lakeland, Florida.

KENTA SIGNED FOR SUPERCARD OF HONOR APRIL 4 IN LAKELAND, FLORIDA!@kentag2s is #GoingToLakeland

KENTA is the fourth talent from New Japan Pro Wrestling currently announced for the event. Jay White, El Phantasmo, and Will Ospreay have also been announced.

A recent episode of the Busted Open Radio show had Bully Ray as the guest and one of the topics discussed included his thoughts on Marty Scurll becoming the newest member of Ring of Honor’s creative team.

“Being the booker is a very difficult job, just on its own. Because you’re worrying about creative or direction of matches for the entire company. Marty, being a top guy, has to worry about the stuff he’s doing and now has to be a patient and good listener to all of the other talent in the company. If he’s the head booker, all of the talent is going to want to talk to you about their push, character, and matches. When Marty is at TV and every guy from the top to the bottom of the card wants his ear, he has to make himself available to them. Just like [Delirious] did for 10 years. [Delirious] is still a part of the process and they will be working together. But if the final decision goes to Marty, that’s okay because he has a different opinion and look at the company and it’s always good to have different ideas. But he has to make himself available to everybody.

If history does dictate to us anything about a top guy, in the middle of his career, having the pencil; it never bodes well. Whenever a guy, who is in the ring, who is the booker of a company, things haven’t gone well. That’s what history has taught us. It’s gonna be rough. I’m more than willing to be patient and see what he can do. There’s no doubt that Marty has a great mind for characters and getting himself over. He is great at getting himself over. Can he come up with creative ideas or matches to get everybody else over? Because that’s your job as a booker. To be more precise, your job is to put people in spots to get themselves over.

If it was up to me, I would have not made him the booker. I would have made him part of the creative process with [Delirious], working side-by-side.”

FITE.TV announced that they will be airing New Japan Pro Wrestling’s upcoming The New Beginning in Osaka 2020 event on their service. The event is currently priced at $24.99 and will air live on New Japan World and FITE on February 9th starting at 2:00AM EST.

Wrestle Kingdom 14 is currently estimated to have generated around an additional 20,000 new subscribers for NJPW’s New Japan World streaming service, according to the Wrestling Observer Newsletter.

NJPW reportedly currently does not have any plans to air their upcoming New Beginning USA 2020 tour live on New Japan World, according to the Wrestling Observer Newsletter.

Major League Wrestling announced that talent from Lucha Libre AAA will be appearing for the company at their Fightland 2020 event on February 1st in Philadelphia, Pennsylvania.

MLW reportedly generated a paid attendance of 1,387 and an overall attendance of around 1,500 for their Zero Hour event this past Saturday in Dallas, Texas, according to PWInsider. Mike Johnson also reported that this event broke the record for most merchandise sales at an event in company history with the bulk of sales coming from Marshall and Ross Von Erich merchandise.

Court Bauer reportedly has been in recent talks with a major entertainment company regarding potential plans to hold an event in Hawaii later this year, according to PWInsider.