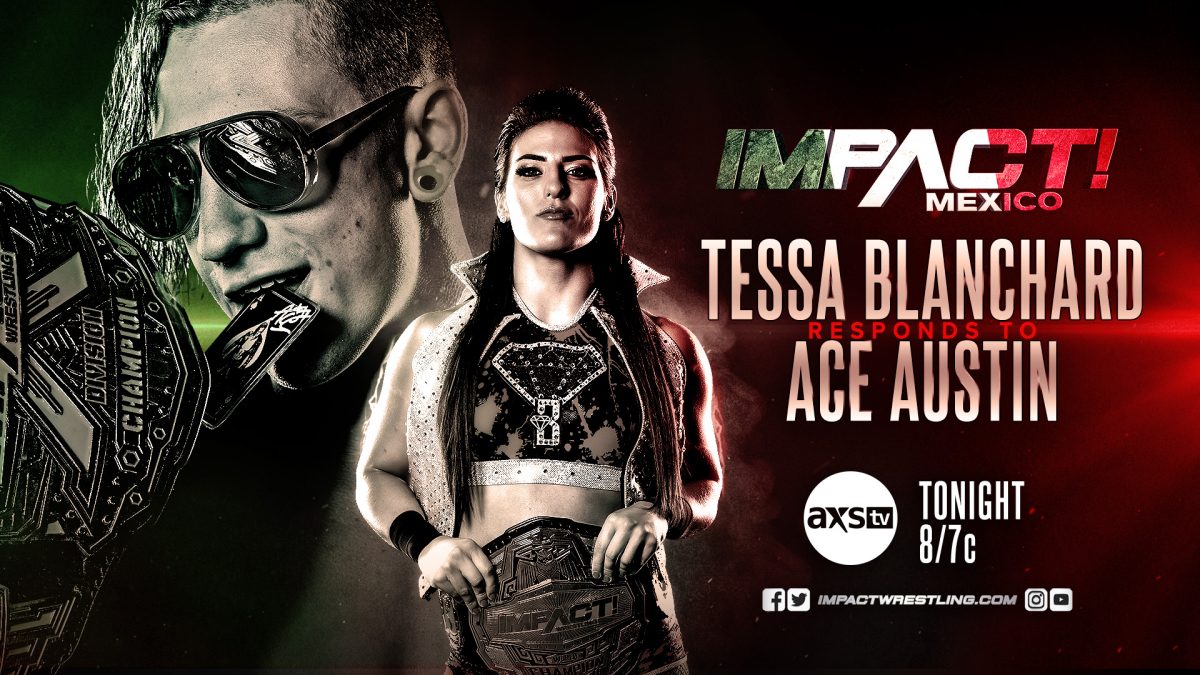 World Champion Tessa Blanchard opens this episode of IMPACT! from Mexico City. Tessa addresses her Champion vs Champion Match against X-Division Champion Ace Austin, February 22 at Sacrifice on IMPACT Plus. Tessa says she may be hard to kill but she’s not hard to find and calls out Ace. He comes out with Reno Scum by his side. They discuss amongst themselves who is going to face Tessa in an impromptu singles match. Adam Thornstowe is the man for the job and the match is on.

Luster gets up on the apron. Thornstowe charges at Tessa but she sidesteps, causing him to knock his own partner to the floor. Tessa hits a Tilt-A-Whirl Head Scissors. Tessa attempts a dive on Luster but he catches her in mid-air and slams her into the apron. Thornstowe attempts a standing Moonsault but Tessa avoids it to start building momentum. Tessa connects with two dives to Thornstowe, followed by a top rope Senton onto Ace and Luster outside the ring. Tessa hits the Cutter for a near fall. Tessa hits the Buzzsaw to pick up the victory.

After the match, Ace distracts Tessa, allowing Luster to attack her from behind. Ace hits Tessa over the head with his loaded fist. All three of them are about to continue the attack when Tommy Dreamer makes the save with his kendo stick.

Knockouts Champion Taya Valkyrie tries to enlist Madison Rayne and Kiera Hogan for help ahead of her Knockouts Title Match against Jordynne Grace next week. After feeling like they were used by Taya in the past, Madison and Kiera refuse to help her again.

We see footage from during the commercial break. Tommy Dreamer gets on the mic and challenges Ace Austin to a Falls Count Anywhere Street Fight tonight. The match is made official. Meanwhile, there’s a bizarre glitch in the television feed.

.@THETOMMYDREAMER issued the challenge during the break – he wants @The_Ace_Austin in a Street Fight in the MAIN EVENT! #IMPACTonAXSTV pic.twitter.com/s96LCZdEYb

Taurus takes out the knee of Rhino, then hits a Shining Wizard. Taurus heads to the top and misses a dive, giving Rhino a chance to build momentum. Rhino battles back with a series of chops, followed by a running clothesline. Out of nowhere, Moose hits the ring and attacks both Rhino and Taurus, ending the match in a No Contest.

Moose ends up falling victim to the numbers game as Taurus catches him with an forearm shot, allowing Rhino to hit the Gore.

Backstage, Michael Elgin looks in the mirror and reflects on his victory in match one of the Best of Five Series against Eddie Edwards last week. Match two happens next week on IMPACT!

Johnny Swinger issues a challenge to Desi Hit Squad on behalf of him and Willie Mack, now called the Mack and Pack Connection. Swinger is quickly intimidated by Shera and changes his challenge to a singles match for Willie Mack. Shera accepts.

Taya continues to try and enlist the help of other Knockouts before her big Title defense against Jordynne Grace next week. Her next target: Rosemary. However, the Demon Assassin is preoccupied as she delivers a sneak attack on Father James Mitchell. Havok tries to free Mitchell who is locked inside a room. Rosemary jumps her from behind and chokes her out.

Next up is Susie’s in-ring debut as she competes against Rosemary in a friendly exhibition. Rosemary believes that a match will allow Susie to finally find what she’s been looking for. This may be her best opportunity yet as James Mitchell and Havok are laid out in the back.

Susie doesn’t want to fight but Rosemary tries to provoke her. Rosemary slaps her in the face with Su Yung’s bloody glove. Susie finally slaps and goes on the attack. They brawl around ringside, up the ramp and into the backstage area.

Susie fights Rosemary up the same staircase in which Su Yung was hung by Havok on a prior tour of Mexico City. It becomes clear that Rosemary is trying to revert Susie back into her former persona, Su Yung. Rosemary ties the noose around Susie’s neck, causing her to have a revelation. Susie transforms into Su Yung as Havok appears and looks on in shock. Later on, Father James Mitchell finds Rosemary and Havok laid out while Su Yung is nowhere to be found.

Vikingo hits a springboard Spear, then sends TJP to the floor with a corkscrew head scissors. Vikingo launches himself off the apron with a Shooting Star Press. TJP regains control by driving Vikingo gut-first into his knees, followed by a slingshot Senton. In an amazing visual, Vikingo jumps over the corner ring post and crashes into TJP on the outside. TJP connects with a Tombstone Piledriver, followed by his signature splash off the top for a near fall. TJP catches Vikingo on the ropes and locks in a modified STF, forcing him to submit.

After the match, The North hit the ring and attack Vikingo after he scored the upset victory over Josh Alexander last week. Fallah makes the save, forcing The North to retreat up the ramp.

Backstage, Katie Forbes distracts Joey Ryan, allowing RVD to viciously attack him from behind. Last week, Joey claimed that Katie Forbes wanted to touch it. Gabby Loren questions why RVD lost his cool. RVD responds by saying he’ll show just how cool he is next week.

Jake hits Daga with a Death Valley Driver in the early going but it doesn’t phase him. Daga comes right back at Jake with a Death Valley Driver of his own. Daga tags in the AAA legend Dr Wagner Jr and he goes on the attack. Wagner hits a flurry of suplexes before tagging Daga back in for a Brainbuster on Jake. oVe connect with a double team foot stomp on Daga but Wagner breaks up the pin attempt. Wagner dives off the apron into Jake while Daga plants Dave on his head to win.

After the match, Fulton attacks Daga and Wagner from behind. Wagner’s son attempts to make the save but gets beaten down by the Madman.

Johnny Swinger informs Willie Mack that Shera wants to face him one-on-one. Willie accepts the match but tells Swinger to stay away from his business.

No one is allowed at ringside for the main event of the evening. Dreamer hits a suplex on the ramp. Dreamer grabs a selection of weapons and hits Ace over the head with a crutch. They brawl into the crowd and amongst the fans. Ace gains control by launching himself off the lower bowl into Tommy at ringside. Dreamer traps Ace’s arm in a chair and connects with a Con-chair-to. Ace busts Dreamer open with his laminated card. Dreamer drives a chair into the heart of Ace with an elbow drop. Dreamer hits a DDT for a near fall. Dreamer is in total control when he drives Ace through a table with a running Powerslam but somehow, Ace kicks out. Ace turns it around with a Backstabber. Dreamer balances on a ladder between the ropes but Ace clobbers him with his baton and connects with The Fold off the top to win.