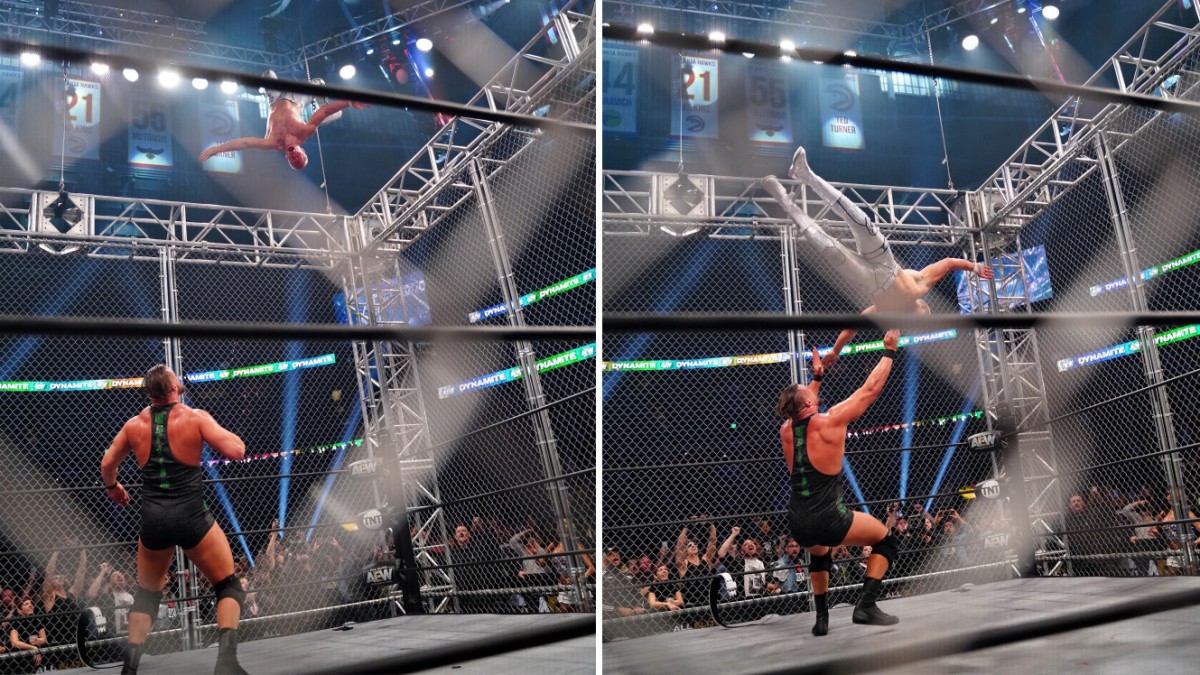 Sports Illustrated held a recent interview with Cody Rhodes and some of the topic discussed included his moonsault off the cage moment, AEW’s different wrestling psychologies, the debut of AEW’s steel cage, AEW’s action figures announcement, and his current feud with MJF.

On the topic of his moonsault off the cage moment, Rhodes stated that it was tricky spot for him to pull off due to his size.

“That was a very Terry Funk style of a moonsault. I’m a bigger guy than people think, so the moonsault doesn’t come off easily.

The only piece of thinking in my mind was to throw my head back. My body will go where my head will go, that’s something John Laurinaitis and Dean Malenko told me when I first started doing the moonsault. As long as I threw my head back, I knew I’d be OK.”

“That’s what I bring. Matt and Nick [Jackson] introduced a new style of tag team psychology. Kenny Omega provides an absolutely different way of doing wrestling that is really important to the evolution of wrestling. Hangman is a big run-and-gun heavyweight. My strength is plugging into the wrestling I grew up on, from the late ’80s to the early ’90s and even farther back. That style was a little bit more disciplined, a little bit more deliberate, and I complement those guys by doing that.

I don’t really consider it a ‘territory style’ match. In this weird way, we’re in new territory. All the older wrestlers will tell you, ‘What’s old is new.’ They’ve never been more right. All these elements of magic are available to use from some of the greats, and I try to pick as much as I can from some of the best ever. And I’m not going to name names, but when you have the two greatest of all-time texting you every week critiquing your work, there is not a better pep talk than that.”

On the topic of last week’s debut of AEW’s steel cage, Rhodes stated that it was his idea for the cage to be very high in size and for it to be lowered from the rafters before his match.

“The cage has to be lowered, that was my rule. So I ended up with the highest cage I could possibly get, and that cost me. I’m terrified of heights. That’s why my eyes are closed.

I thought about it all day. Tony Khan was adamant that I didn’t do it. I’ve never seen a boss like him and how he leads, and the way he cares about his investments. Too many people were trying to talk me out of it. Typically, I’m by the ‘Go position’ during our show, but I stayed away.”

On the topic of the debut of AEW action figures, Rhodes stated he felt honored to be chosen for the company’s first series of action figures.

It’s not unlike Picard. I’m watching Picard on CBS All Access right now, and if no one is talking to me about Picard, I’m not happy. It’s that weird ‘success begets success.’ For people who bought in and believe, I want them to know there is a wicked cool toy company in Jazwares. The line is amazing, they’ve blown away current wrestling figures. I’m proud to be part of the first line. They’ve set a new standard in wrestling figures.”

On the topic of his current feud with MJF, Rhodes praised MJF’s commitment to his character and how it has helped improved the storytelling of their feud together.

“There is a pure evil to Max. He’s unlike anyone who I’ve ever encountered in pro wrestling. I don’t think anyone knows the real Max. He lives in Long Island with his family, and I think they’re the only people, when that door closes, that know who Max really is. His commitment is incredible.

There is a deeper element at play. That’s why I don’t like the term ‘heel.’ If you look back at Christmas night in World Class Championship Wrestling from 1982, the night Michael Hayes turned on Kerry Von Erich. That’s not what happened. He got kneed by Flair into Kerry, and then Terry defended him because he only saw the second half of the hit. There was not a plain, black-and-white heel turn.

Max talks about how I held him down, and that genuinely hurts. Now he’s in the big spotlight, in the second main event of a show in a sold-out arena, and we’ll see what he can do.”