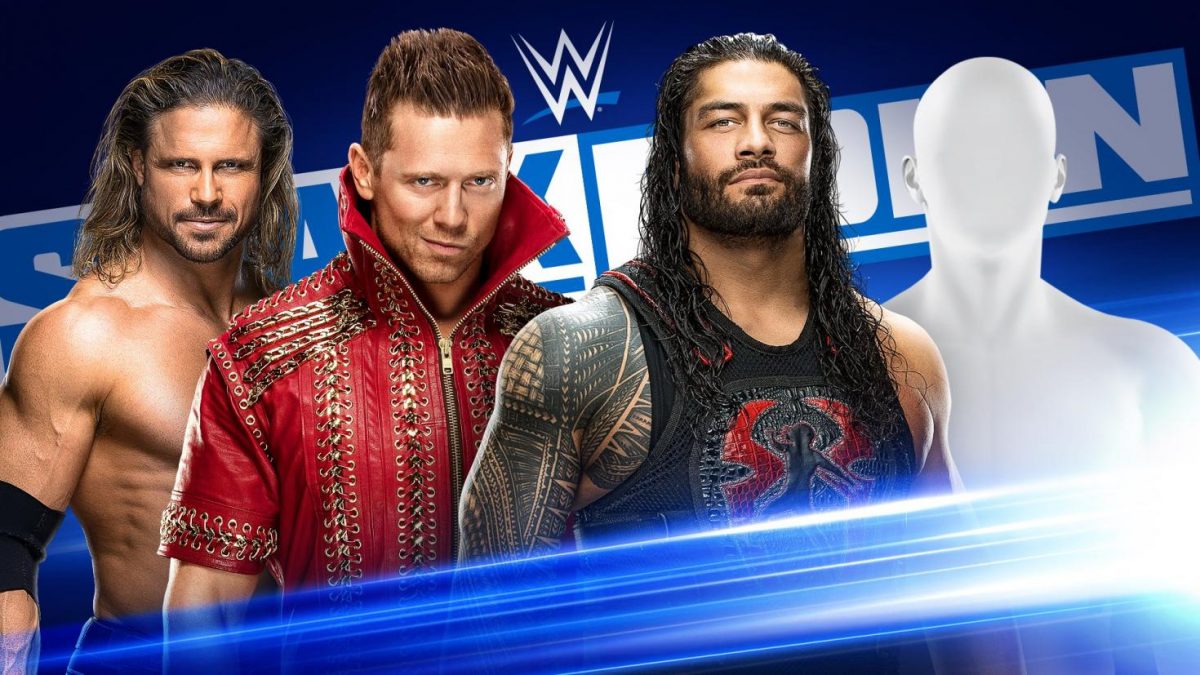 A Moment of Bliss: Carmella, Bayley

Both women come out and sit on the chairs drinking their coffee. Bliss welcomes everyone to the first Moment of Bliss of 2020 and Nikki wishes everyone a happy Valentine’s Day. Nikki asks Alexa who her celebrity crush is but Nikki cuts her off saying it’s Brad Pitt. Alexa says that is exactly who she was going to say. Corey asks who Brad Pratt is.

Nikki introduces Carmella to the show. Out comes the women’s number one contender. Alexa congratulates her on her victory last week. Alexa says some people say that the victory is a bit surprising as we haven’t seen much of her lately. Carmella says she is full of surprises and tonight she will become the two time SmackDown women’s champion.

Carmella gets in Bayley’s face. She says to forget waiting for later, to do the match right now. Carmella walks down to the ring.

The bell rings and we are under way. A shoulder block by Bayley takes Carmella down. Carmella back up and a hip toss takes Bayley down. She goes for the cover but Bayley kicks out. An arm bar by Carmella on the women’s champion as Bayley reaches the ropes. Bayley gets ties Carmella up on the ropes and starts pounding on her.

Back from commercial, Bayley has Carmella in a headlock in the middle of the ring. Carmella with a jaw breaker counter and she slams Bayley down onto the mat. A boot to the face by Carmella followed by a clothesline. Carmella with a hurricanrana. A running forearm takes Bayley down. Carmella runs to the ropes but Bayley catches her in a Bayley to belly. She goes for the cover but Carmella kicks out!

Carmella is arguing with the referee as Bayley attacks her from behind.

Naomi’s music hits and out she comes. She gets in the ring to go face to face with Bayley. Carmella pushes Bayley into Naomi as Carmella starts beating on Bayley. Naomi with a big kick onto Bayley with Carmella delivering a kick of her own as she falls to the outside.

We cut to a clip of last week where Baron Corbin attacked a WWE television crew member. WWE has fined and barred Baron Corbin from SmackDown this week. 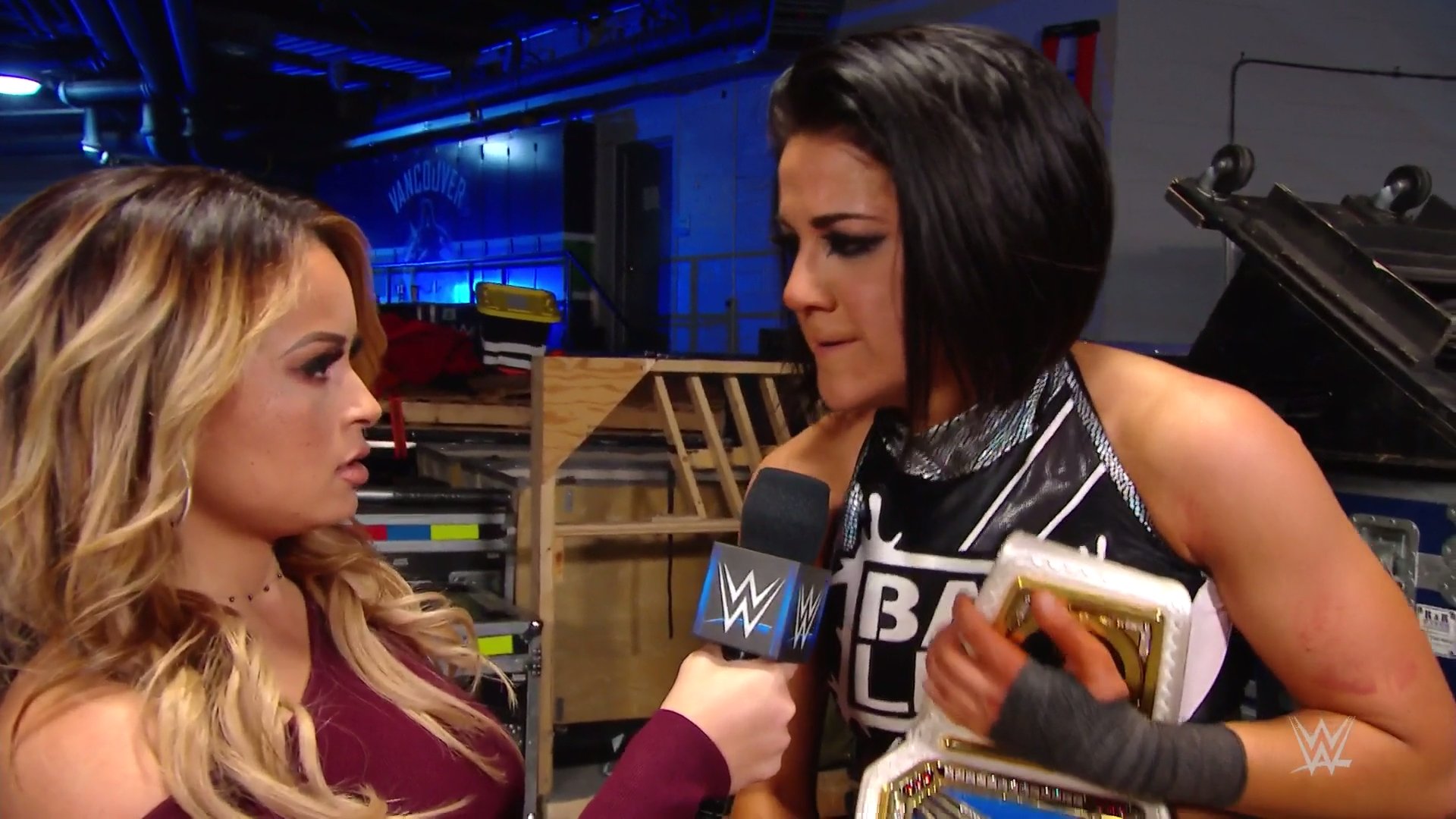 Bayley is backstage frustrated. In comes Kayla who asks her if Carmella will get a rematch. Bayley said she beat Carmella just like she beat everyone else. The next time she defends her title will be at Super ShowDown and nobody can touch her.

Otis is seen in front of a mirror getting ready for his date with Mandy. His phone vibrates as he starts reading his message to Mandy out loud. In comes Tucker, he tells Tucker that Mandy is running a bit late. Tucker starts encouraging him. He asks Tucker if Mandy could actually like him. Tucker keeps hyping him up.

Apollo and Shorty G get in the ring and attack Sheamus before the referee can ring the bell. The referee breaks it up as the bell rings. Sheamus is in the ring with Gable. A kick by Gable as Crews is tagged in. Another kick by Gable. Crews with a drop kick. An arm bar by Crews as Gable is tagged in. A double axe handle onto Sheamus but Sheamus stays on his feet. He takes Gable down. 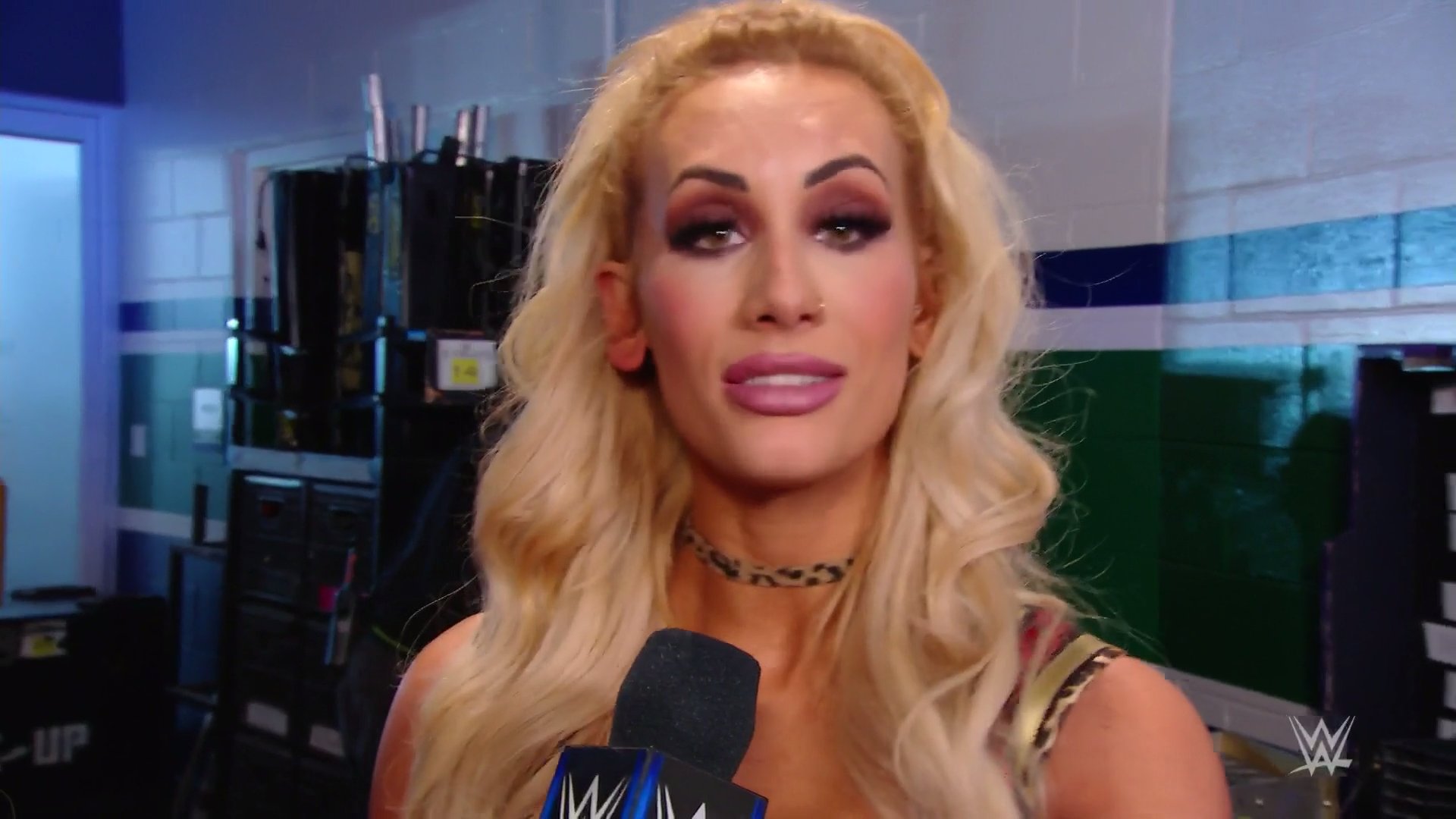 Carmella is backstage as she’s cut off by Kayla. Carmella says she has earned everything she had but she demands a rematch against Bayley. She asks WWE management and FOX to name a place and she will be there. She promises that she will be the next SmackDown women’s champion.

We cut to Mandy Rose being seated at a restaurant.

Hulk Hogan is live on the titan tron. Michael Cole mentions that he will be inducted into the Hall of Fame once more with the nWo. Hogan says the nWo took it another level, to be inducted again mean for life. Cole asks Hogan about one of his old rivals, Goldberg. He asks if Goldberg has a chance against Wyatt. Hogan says he has been in the business for a while but he tells all the young guys that where they are going, he has already been there. He says he has felt Goldberg’s power but has felt the vibe coming from Wyatt’s dressing room when he’s at the arena.

It gets cut by the Firefly Fun House. In comes Wyatt playing the air guitar on his title, mocking Hogan as he rips his shirt. Wyatt says he has said his prayers and taken his vitamins and now he is champion for life.

Wyatt gives Huskus a piece of chocolate as Wyatt says he hopes it’s not too sweet. Hogan says Bray has jokes but when you get in the ring with Goldberg, it’s not a joke. Wyatt says he doesn’t need luck, he has a Fiend. And if he’s not careful, remember that there can always be room for one more as Wyatt holds up a picture of Hogan to put up on the Firefly wall.

Hogan tells him he will see him in Tampa at the Hall of Fame. Wyatt says bye and that he will see Goldberg real soon.

Cesaro and Sami Zayn are in the ring. Zayn has a mini guitar in hand and he mocks Elias. He calls it a protest concert. He says in recent weeks, himself, Cesar and Nakamura have been victims of injustice and that at the hands of Elias and Braun Strowman. There’s security standing outside of the ring.

Zayn says they have a protest song for everyone. Zayn is tuning up and as he is about to sing, we hear a guitar string and it’s Elias walking down. He says he was in the back taking a nap when he got a call telling him he has to come out and stop this. Elias says he knows what Sami is doing and that’s what many have done before. He’s trying to make his name off Elias. It has happened in the past and with WrestleMania on the way, it will happen again.

Elias says the reason is because there is a universal truth which Sami knows and that is that WWE stands for Walk With Elias as the fans chant it. Sami tells him to shut his mouth. Sami says he wants to know who Elias thinks he is. Elias is out interrupting a protest concert. Elias says he is staging a counter protest. Sami says on any other night, he would have his security throw him out of the building. But if Elias has something to say, to get in the ring.

Security lets him in. Elias gets in the ring as Sami starts playing his mini guitar and Cesaro plays the cowbell. The fans chant Walk With Elias as Sami stops. Elias says he likes the sound of that song. Sami tells them to shut up.

Sami plays the guitar as Cesaro starts playing the cow bell as Sami tells him he needs less cow bell. The fans chant We Want Cow bell. Everyone stops. Cesaro throws his cow bell away as the fans boo. Sami starts on his guitar again with Elias sitting on the top rope. The fans chant Walk With Elias as Elias thanks them. Sami says if they don’t shut up, this concert is over.

The fans chant yes. Sami says the only joke around here is that they have Daniel and Henrik Sedin’s numbers hanging in the rafters. Cesaro goes after Elias as Elias takes him down.

Sami distracts Elias and out comes Braun Strowman. He knocks the security down. He chases Sami and Cesaro around the ring. A security attacks Strowman from behind as Strowman starts to chase him. The security gets in the ring as Elias knocks him down. He and Strowman send him flying over the top rope onto the other security guards. 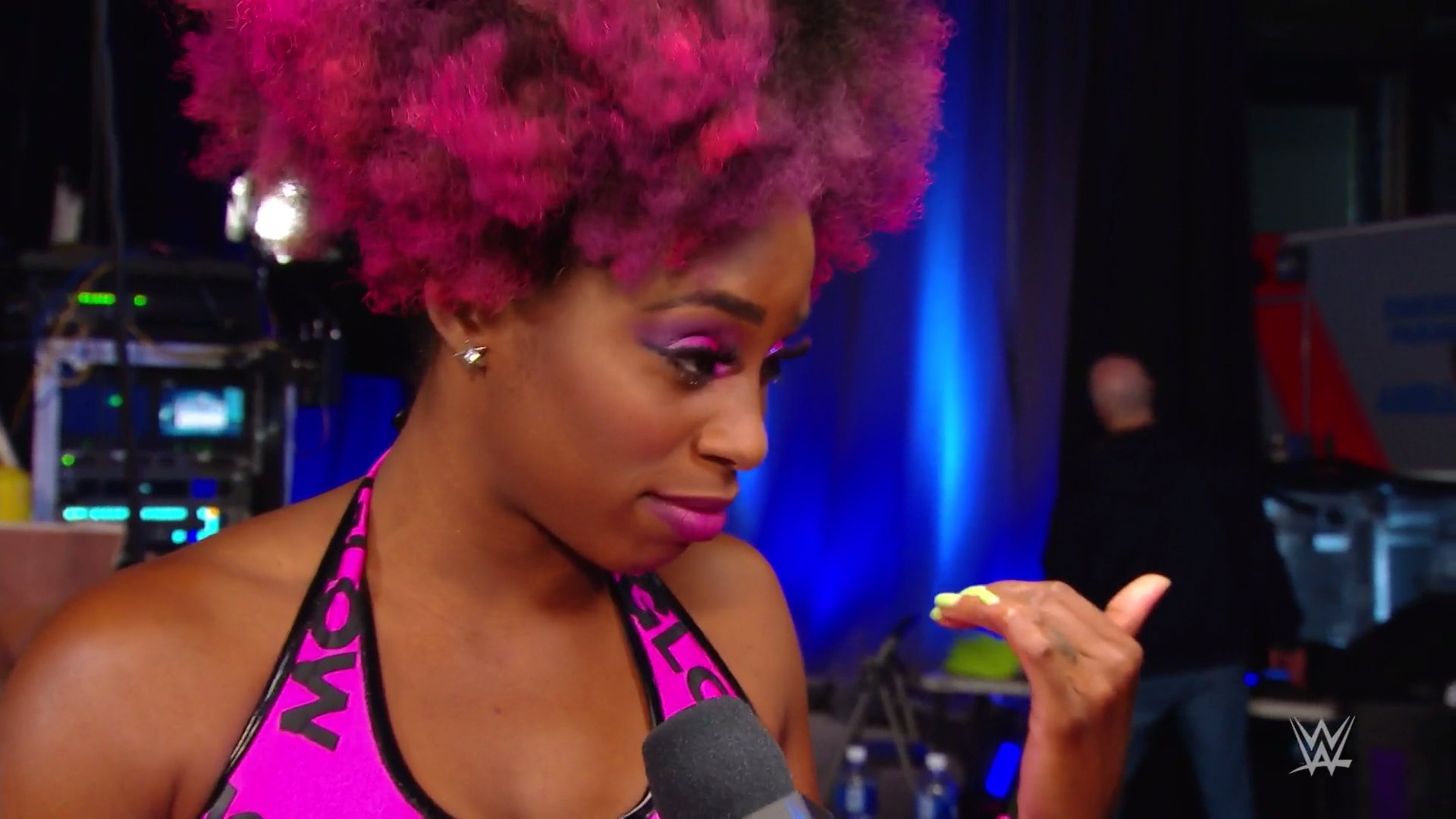 Naomi is backstage and in comes Kayla. She says tells Kayla she is sick and tired of Bayley. She says she wants a title shot and that Bayley has never defeated her.

We see Mandy waiting at the restaurant. 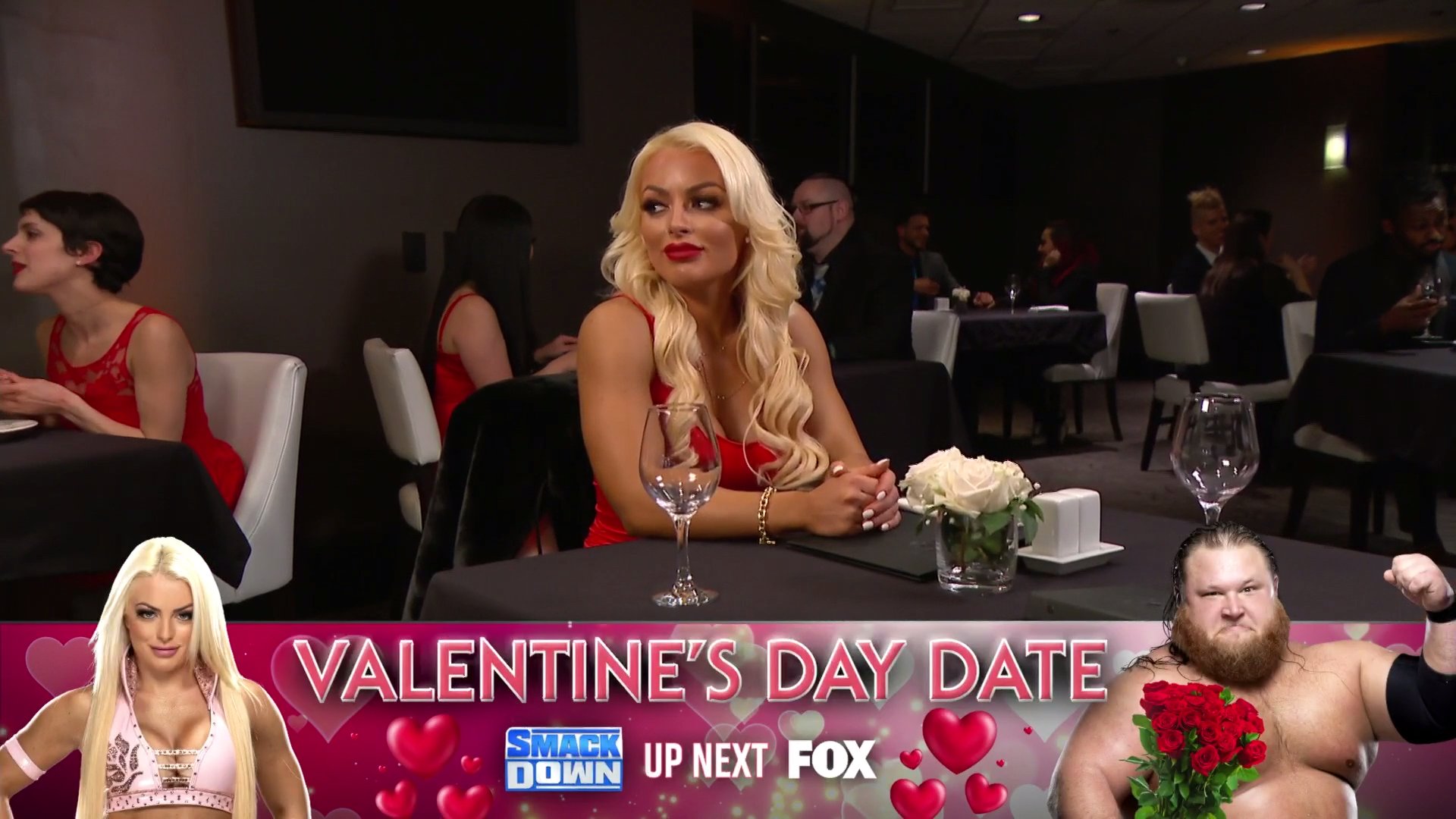 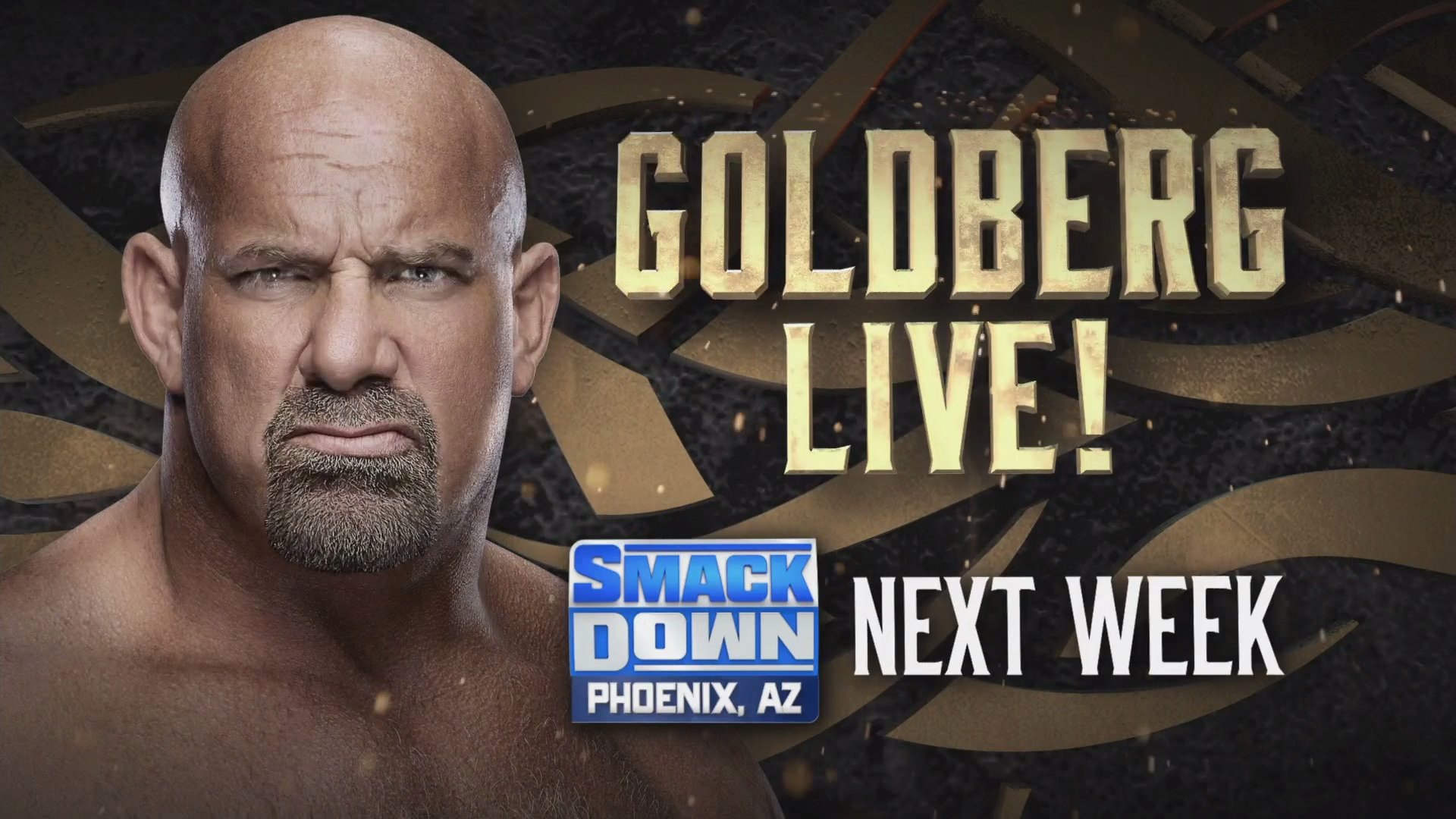 Next week it’s Carmella vs. Naomi and the winner will face Bayley for the SmackDown women’s championship at Super ShowDown.

Goldberg will be live on SmackDown next week.

We see a video hyping up John Cena’s return to SmackDown in two weeks.

A video airs showing the history between Otis and Mandy Rose.

We cut to the restaurant. Otis, holding roses, asks the doorman if he has seen his beautiful peach. Otis licks his palm and runs it through his hair.

An arm is put on Mandy’s shoulder as she smiles and tells Otis that she was getting worried. The camera pans up and it’s Ziggler.

In comes Otis, he sees the two of them sitting together. He drops the roses on the floor and walks away.

Out comes The Miz followed by John Morrison. Miz says alst week, The Usos talked a big game. But one week later, they can’t be here. Miz says he has been here for years and he’s always there. Morrison says he has been back for a month and he has always been here too. Miz says they are the greatest tag team of the twenty first century.

Roman’s music hits as he walks down to the ring. He gets in the ring along with Miz and Morrison.

Daniel Bryan’s music hits and he’s Roman’s tag team partner. Before the bell could ring, we cut to the crowd as Baron Corbin is walking down the stairs holding a ticket.

Back from commercial, Reigns is in the ring with Morrison. Kicks to the leg by Morrison followed by an arm bar. Roman with a clothesline takes Morrison down. A headbutt by Roman. He starts spearing Morrison in the corner. Bryan is tagged in. They double team Morrison.

Bryan with an uppercut. He knocks Miz off the ring apron. Right hands by Bryan onto Morrison. Bryan runs to the ropes and a suicide dive takes Miz down. He gets back in the ring. Bryan climbs the top rope and hits Morrison with a drop kick. Bryan with the yes kicks. He goes for the cover but Morrison kicks out. Morrison rolls to the corner and Bryan with right hands. He places Morrison on the top rope. Bryan with the hurricanrana.

Back from commercial, Miz and Morrison are double teaming Bryan. Morrison goes for the cover but Bryan kicks out. A headlock by Morrison but a jaw breaker counter by Bryan to break it up. A kick to the face by Morrison as The Miz is tagged in. They try to double team Bryan but Bryan sends Morrison to the outside. Miz climbs the top rope as Miz trips him up. Miz goes for the suplex but Bryan slides under him and trips Miz up on the turnbuckle. Morrison tags himself in as he knocks Roman off the ring apron.

He lifts Miz up as slams him into the mat. The shining wizard by Morrison. He goes for the cover but Bryan kicks out. Morrison climbs the top rope, he jumps but Bryan moves out of the way. Roman is tagged in and as is The Miz. Roman with right hands and clotheslines. He knocks Morrison off the ring apron. Roman runs to the ropes and a big boot takes Miz down.

Corbin attacks Roman after the match from behind.