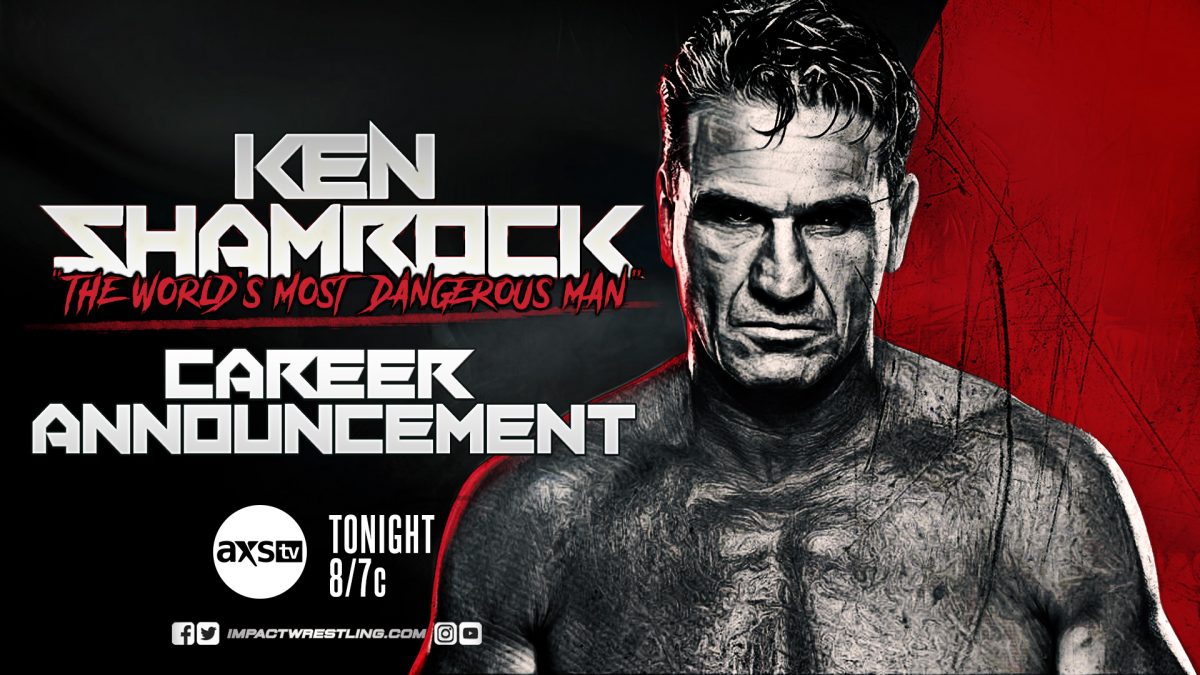 Scott D’Amore is seen briefing security after weeks of mysterious interruptions from the ICU.

Ken Shamrock arrives to the arena.

Page prevents TJP from hitting a tornado DDT on Alexander, allowing his partner to reverse the momentum and gain control. The North double team TJP, cutting off the ring in the process. TJP finally tags in Fallah but Page has the referee distracted, causing him to miss the tag. TJP drives his knees into the gut of Alexander and this time, successfully tags in Fallah. Fallah goes on a rampage, delivering offense to both members of The North. Fallah hits a pop-up powerbomb on Alexander for two. The North regain control when Alexander clobbers TJP with a running crossbody. Fallah hits a running crossbody of his own on Alexander but Page breaks up the pin. Everyone is down after a series of big clotheslines from Fallah. TJP forces Page to tap out but the referee doesn’t see it because Fallah has Alexander in a submission at the same time. The North connect with The Northern Assault on TJP to win.

.@WeAreRosemary learned the hard way that you don't suck the soul of @TheTayaValkyrie's friends on The Real Housewives of Slam Town. #IMPACTonAXSTV pic.twitter.com/lgykDXSSrC

This is Chris Bey’s debut match since signing with IMPACT Wrestling. Bey sends Drake retreating to the outside with a kick. Bey flips over the top rope, crashing into Drake on the floor. Drake plants Bey face first into the mat in an attempt to shift momentum. Bey hits the Bey-Mouser, a springboard Fameouser for the win.

Backstage, Alisha Edwards approaches Knockouts Champion Jordynne Grace in an attempt to join her team for the Knockouts Lethal Lockdown match. Jordynne praises Alisha for conquering her hardships over the last year and quickly accepts her as the first member of the team.

Gabby Loren interviews TNA veteran Chase Stevens. Moose interrupts just like he has done to many of the TNA veterans in recent weeks. After an exchange of words, a heated brawl breaks out.

"It is an absolute honor to be standing here next to a TNA superstar – Bret Michaels."@TheMooseNation has no respect for former three time World Tag Team Champion @NaturallyChase. #IMPACTonAXSTV @GabbyLorenTV pic.twitter.com/UQ7fXO5IVD

Jimmy Jacobs conducts a sit-down interview with World Champion Tessa Blanchard as she prepares to defend her title against both Michael Elgin and Eddie Edwards in a three-way match at Rebellion.

"I'll take on anybody…because I have become the BEST in IMPACT Wrestling."

RVD, Katie Forbes and Joey Ryan come out as a unit, now known as Cancel Culture. Both Katie and Joey are more covered up than usual. Joey gets on the mic and says they are more than what people make them out to be on the internet.

Cody is perched on the ropes, RVD sends him tumbling to the floor with a kick off the top. Joey taunts the crowd and says he will never get anyone to touch it again. Jake hits a big powerslam on Joey but RVD breaks up the pin. Jake connects with a Spear on RVD. Katie distracts Cody from the apron, allowing Joey to capitalize with a superkick. RVD finishes off Cody with the Five Star Frog Splash to win.

Ken Shamrock reveals that IMPACT Wrestling contacted him to be here tonight for something special.

Willie Mack tells X-Division Champion Ace Austin he didn’t need his help against Johnny Swinger and Glenn Gilbertti last week. Ace says he wants to add the Tag Team Championships to his list of accolades. Willie reminds Ace that his one and only tag team partner is the currently out-of-action Rich Swann. Willie tells Ace that he may soon be the X-Division Champion as he competes in a Scramble Match to determine the number one contender next week.

Josh Mathews notes that if Lacey Ryan can score the victory here, she may earn a permanent spot on the Knockouts roster. Kiera hits a Hurricanrana out of the corner. Lacey connects with an overhead German suplex. Lacey builds momentum with a big dropkick. Kiera delivers a thumb to the eye, followed by a dropkick to regain control. Lacey connects with a slingshot elbow drop, followed by a modified GTS for two. Kiera puts Lacey away with her signature swinging neckbreaker.

Father James Mitchell leaves a note for Su where he challenges her to face Havok inside the Undead Realm next week. This way, they can settle their differences once and for all without the interference of Rosemary.

Father James Mitchell has summoned @realsuyung to the Undead Realm for one final showdown with @FearHavok. #IMPACTonAXSTV pic.twitter.com/NuXwVKhpuA

Things are very evenly matched in the early going. Daga connects with a head scissors takedown. Jake smashes Daga’s leg into the hard apron. Daga is about to dive through the ropes but Jake cuts him off with kick. Jake takes the opportunity to fly and connects with a tornado DDT on the floor. Daga hits a gutwrench sitdown powerbomb for two. Jake connects with a series of superkicks but it’s not enough to keep Daga down. Daga jumps off the top but Jake Crist catches him with a mid-air cutter for another near fall. Daga hits his signature driver to win.

Security finds who they presume to be the hacker. They present him to Scott D’Amore who instructs them to let him go. Scott tells them it’s not the hacker but an ordained minister, Ryan Cage.

We may not have found the intruder but we'll keep searching. #IMPACTonAXSTV pic.twitter.com/t1lQdMIe56

Josh Mathews invites Ken Shamrock to the ring for the highly-anticipated career announcement. Mathews congratulates Shamrock for his amazing MMA and pro wrestling accomplishments and invites him to be the newest inductee into the IMPACT Wrestling Hall of Fame. The ICU hacks into the video package presentation. The lights go out and the hacker appears in the middle of the ring. The hacker throws a fireball into Shamrock’s face before revealing himself to be none other than Sami Callihan. The lights come back on and Callihan has disappeared. IMPACT! goes off the air.