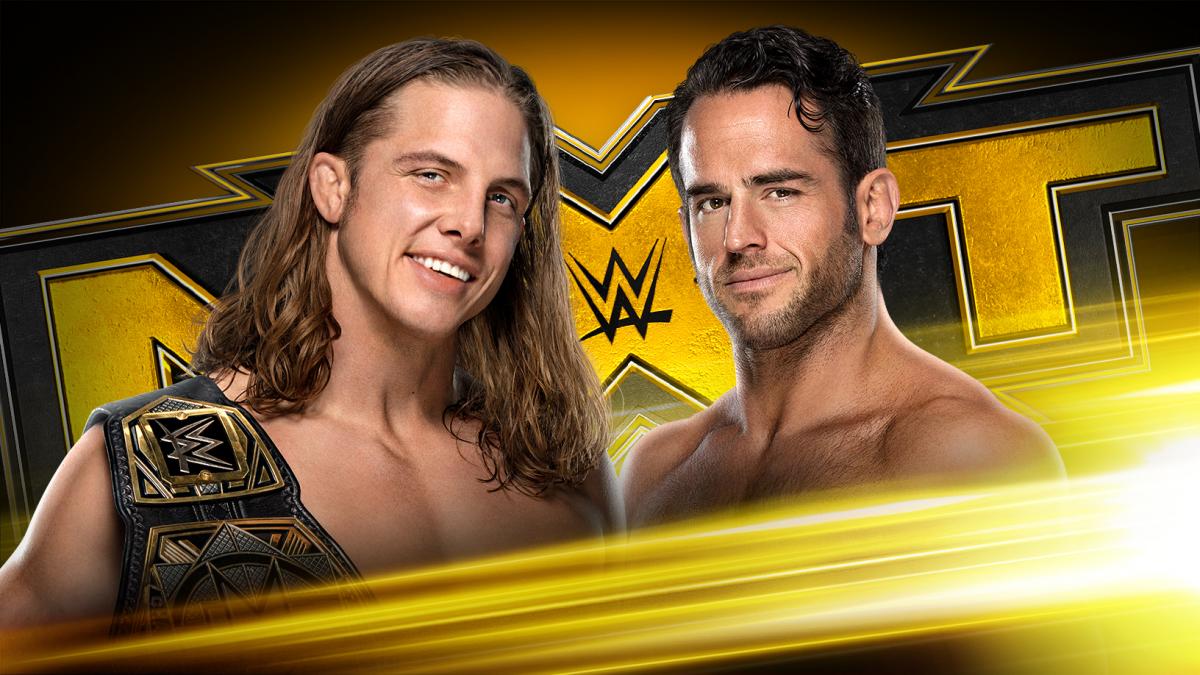 Theory with a chicken wing and cross face followed by a knee and forearm to the back. Theory with a rear chin lock and a knee in the back. Breeze with a jaw breaker and he sends Theory to the apron but Theory drops Breeze on the top rope and then Theory hits a rolling drop kick as we go to commercial.

We are back and Breeze with a thrust kick and another kick to Theory. Breeze with running forearms into the corner. Theory avoids a forearm and he catches Breeze on his shoulders and he hits Three Seconds Around the World for a near fall. Theory kicks Breeze to the floor and he connects with a forearm. Theory sends Breeze into the guardrails. Theory returns to the ring and the referee restarts his count for Breeze. Theory with a kick when Breeze returns to the ring. Breeze with a rana for a near fall followed by a jumping knee.

Dain goes shoulder first into the ring post when Miles moves. Miles with forearms. Miles with a drop kick and Dain stays on his feet. Dain with a forearm and accordion slam and back senton. Dain goes to the turnbuckles for a Vader Bomb and the three count.

We see footage of the injury that Aliyah suffered at the foot of Xia Li from months back.

We see Xia Li down in the back and she is holding her knee. An official calls Steve Corino over to check on Xia. They try to find out who did it.

Aliyah is told that Xia is not medically cleared to compete tonight, but someone else is… Io Shirai.

Io with a drop kick and forearms. Io chokes Aliyah in the corner. Io with a hesitation double knee strike. Io with a double underhook but Aliyah escapes and Aliyah with a clothesline. Aliyah with kicks. Aliyah with a hip toss but Io lands on her feet and she punches Aliyah. Io with a butterfly back breaker and then Io goes up to for the moonsault and gets the three count.

NXT North American Champion Keith Lee makes his way to the ring and Jon Quasto is in the ring with him. Keith is asked about his defense against Cameron Grimes and the attack by Damian Priest and his response against Dominik Dijakovic. Keith says he had a competitive match against Cameron Grimes. He won, then he raised his hand and title in the air but he was attacked from behind. Little did he know that person was Damian Priest. When he raised his head, he saw the man he thought attacked him holding the title. Keith says he owes Dominik Dijakovic an apology.

Dominik Dijakovic makes his way to the ring. Dominik tells Keith he doesn’t give a damn about the apology. All he cares about is that title. He says he would never attack Keith from behind because he has more respect for Keith than Damian. You did attack me and took food off my family’s plates.

Damian Priest makes his way out and he asks Dijakovic how is the knee. He says a nightstick to a back the size of yours still hurts. Damian says his eyes are on that prize because it is going to give him what he wants. More money, more women, more legacy, and more fame. We know that his name will live forever but he needs that title.

Keith says that Damian wants to live forever, but the person you attacked means that you won’t live forever. You can both quarrel over the title but the fact is that the champ is right here.

Damian says it is time you don’t stand any more.

Adam Cole says he is on vacation, poolside, but he has been thinking about the altercation with the Velveteen Dream. He got flustered but then he wondered how could he get flustered. He won the first WarGames match in WWE. He was the first North American Champion. Now he is the longest reigning NXT Champion. Velveteen Dream, you have done nothing to earn a title match. Adam says Bobby Fish wants a piece of you so why not face Bobby. When you lose, Adam says he will prove that you are a loser.

Vink and Burch start things off and they lock up. Vink sends Burch to the mat. They lock up and Vink sends Burch into the corner. Burhc avoids Vink and applies a side head lock, Vink with a shoulder tackle. Thorne tags in and he connects with elbows to Burch and applies a wrist lock into an arm bar. Burch with a wrist lock and take down followed by a boot to the hand. Lorcan tags in and they chop Thorne. Lorcan with more chops. Thorne with a boot to Lorcan and Vink tags in and he hits a uranage in the corner. Vink with a rear chin lock.

We are told that the ladder match will happen in two weeks.

Riddle escapes a knee attempt and Strong hits the jumping knee followed by a series of running forearms but Riddle hits Bro Derek for the three count.

Malcolm Bivens comes out and he says that while you are one half of the tag team champions, your partner is half way around the world. Malcolm says it is time that you meet the future of the tag team division.

NEXT WEEK on #WWENXT:

Bobby Fish will face Velveteen Dream next week. There will be a second chance Gauntlet for the final spot in the ladder match. We will see Keith Lee defend the NXT North American Championship against Dominik Dijakovic and Damian Priest.

Triple H is in the ring and he says in NXT, there has been no greater rivalry than Johnny Gargano versus Tommaso Ciampa. It is a rivalry that has sparked…

Tommaso Ciampa’s music plays and he makes his way to the ring. Ciampa says he has been here for five years and everything that had to be said has been said and what has been done has been done. He wants Johnny to come out.

Hunter says that there will be no physicality tonight. Hunter tells Johnny to come out.

Johnny says Hunter has lost his mind if he thinks he is going to get into the ring with Ciampa after what he did. Johnny says he does not know why he is being fined because of what Ciampa did.

Hunter asks Johnny if nothing was his fault. He says if it was up to Regal, he would have fired both of you. There will be no physicality tonight. He is not asking Johnny to get into the ring, he is telling him. He tells Tommaso not to touch Johnny and Johnny repeats the order. Hunter says this has gone on long enough between the two of you. He can understand where you are. He has done it with Shawn. There will come a time in your life when all of that will be put aside. You will realize there is more in your life than what happens in the ring. It has to end. He can’t have you tearing up buildings or endangering people. You are right where it should end. It should happen on the biggest stage.

Johnny says this was supposed to end last year but you broke your neck. Johnny says he wishes he was the one to break his neck.

Ciampa says bigger things have been going on in his world. He broke his neck and he gave away his life. He is telling them that THIS needs to end.

Hunter says after everything you have done, it deserves to be on the biggest stage.

Johnny says all they need is a ring, a referee, and a camera guy.

Ciampa says this is about who is the face of NXT. Johnny says it is him. He will make Ciampa realize what kind of monster he is.

Hunter says if you don’t need a crowd or an arena, he will give them the opportunity. When do you want it?

Hunter says in two weeks, he will find an empty building and put a ring in there with a referee to say when it is over. Two will walk into the building, but only one will walk out. If it continues after that, then neither of you will be here. You won’t have to worry about being the heart and soul of NXT because NXT will go on without you. You will get a message in two weeks where to go.

Johnny says you will know that Johnny Gargano is the better man, the better wrestler, and the better everything.

We see a series of images on the big screen (apparently of Killer Kross) as we go to credits.