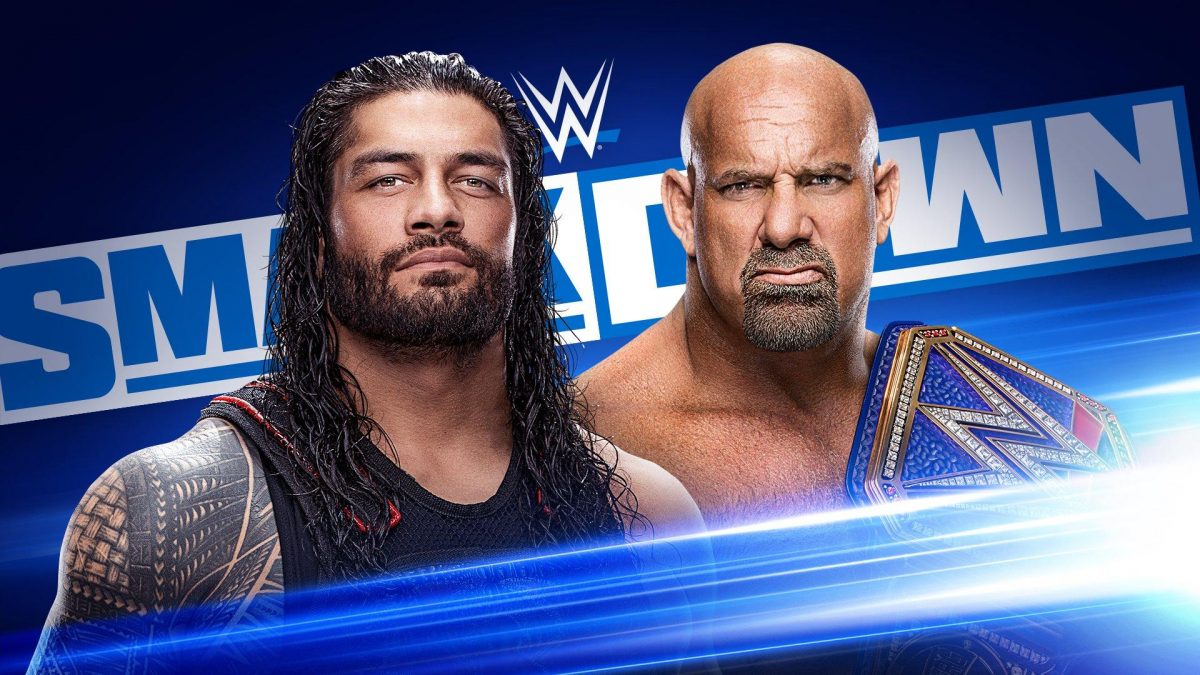 WWE Friday Night SmackDown kicks off from the Performance Center. Michael Cole is in the ring as he starts off mentioning that WrestleMania will be a two night event calling it “Too big for one night”. Cole mentions that Rob Gronkowski will be hosting the show as we see a small video package talking about the former NFL Super Bowl champion.

In the ring with Cole is Mojo Rawley. He slaps Cole around telling him he has to be hyped about it. Rawley introduces Gronkowski to the ring. Out comes the former NFL star as he dances down to the ring wearing a GronkMania t-shirt. Cole welcomes him as Gronk says he was watching since he was a kid, watching since the FCW arena to support Mojo. Gronk said he’s been to sold out WrestleMania’s in front of 80,000 people and now he is here in front of zero people but he’s still hyped and he will be hosting the show.

Rawley says he is here to watch his back because the WWE is different from the NFL. They get hit on the field, off the field, in the ring. The two start to joke around as Gronkowski gives Mojo a few chops to the chests and out comes Baron Corbin to the ring.

Corbin congratulates him on being the host but he’s setting himself up for failure if he’s taking advice from Mojo. As he should already know, his name is Kin Corbin and as his king, he expects to be greeted in a certain way. He expects him to get on his knees and bow down. Gronk says no as Corbin says it’s not for him, he’s a party guy. He says he was in the NFL and now he’s here. Gronk is used to wearing protective pads but in the WWE, they don’t wear that. Corbin says he is bigger and stronger than Gronk and if he wants to have a good time at WrestleMania, he has to fall in line just like everyone else or his party is over.

We hear a guitar string and it’s Elias. Corbin asks why he’s here. Elias says for the past few weeks, he has had a song ready to go that he wants Corbin to listen to. Corbin agrees only if Elias will go away. Elias says yes. The song goes:

“Oh Corbin can’t you hear how dumb you sound, Gronk will rip your skull and spike it like a touch down. So off with your head, I don’t think you’ll survive, I just wish there were people here to see it live. Because…”

Corbin cuts him off as Gronk is laughing. Corbin gets in his face as Mojo gets on all fours behind Corbin and Gronk pushes him to the ground over Rawley. Corbin gets up but Elias hits him and throws him over the top rope.

Gronk says as the host, he is advocating that Elias and Corbin have a match at WrestleMania.

Bryan and Nakamura start off the match. Zayn is on commentary. Both men exchange reversals to start the match. Gulak is tagged in and an arm bar on Nakamura but Nakamura reverses it and Cesaro is tagged in.

A headlock take down by Cesaro but Gulak reverses it. Once more reversals by both men as Bryan is tagged in. Bryan goes after Cesaro’s leg but Cesaro reverses it and hits him with an uppercut. Nakamura is tagged in. Both men with right hands and Bryan with an uppercut. He sends Nakamura to the ropes and Cesaro is tagged in. Nakamura is sent to the outside and a suicide dive by Bryan. He climbs the top rope and a cross body but Cesaro catches him and hits him with a back breaker. Cesaro knocks Gulak off the ring apron.

Nakamura in the ring as he attacks Bryan. Cesaro and Nakamura throw Bryan to the outside. Cesaro with uppercuts to Gulak in the corner. Nakamura is tagged in and he kicks Gulak. Nakamura runs towards Gulak but Gulak hits him with a clothesline. Cesaro is tagged in. European uppercuts by Cesaro. He gets Gulak in the corner but Gulak with a back elbow and Bryan is tagged in. Gulak with a cross body off the top rope, Cesaro catches him and drops him, Bryan goes for a sunset flip off the top rope on Cesaro and gets the pin.

Michael Cole welcomes Paige as she’s on Skype in Los Angeles but she’s interrupted by Bayley and Banks who come down to the ring. Bayley tells Cole to leave. Bayley says Paige no shows again. Bayley welcomes Paige to her show as Paige says she has a way with words. Bayley tells Paige to say what she has to say.

Paige says it’s bad enough having to listen to them but they know it takes more than greatness to change people’s hearts. It takes courage and any woman who went into that ring showed courage and that’s courage that they lack. Bayley calls herself the most dominant SmackDown champion in history. She asks Paige if she wants to do something about it but Paige can’t do anything about it. Paige says her career is over but it’s WrestleMania season. And that means she can’t wait to see her title. Paige says she has a match for Bayley at WrestleMania.

Sasha Banks calls Paige a bitch. Paige says Bayley’s final opponent is her, Sasha Banks. The camera cuts to Sasha as her and Bayley look at each other. Bayley storms out of the ring as Sasha shakes her head.

We're reliving the @WrestleMania 30 BATTLE between @WWEBrayWyatt and @JohnCena ahead of their showdown 6️⃣ years later… #SmackDown pic.twitter.com/VxHR268TU8

John Cena vs. Bray Wyatt from WrestleMania 30 airs in its entirety.

Kayla Braxton is backstage with Bliss and Cross. She asks them about the Kabuki Warriors. Cross is angry about last week as Alexa tells Asuka that last week she sneaked and attacked her. She says she can play that game and better. She asks Nikki about next week, Cross says she has nothing. Alexa says she is challenging Asuka to a match next week.

The Dirt Sheet: The Miz and John Morrison

John says this week he taught himself how to whip and nay nay. Miz says he feels like they’re missing something. Morrison says aside from fans chanting “Miz and Morrison, hey hey, ho, ho”. Miz says they’re on their way to WrestleMania and have no challengers. Miz says they should ask the audience tonight who they think they should face at WrestleMania.

Miz asks who they think they should face at WrestleMania. We caught to a previously taped segment where Miz and Morrison are dressed as the New Day and they challenge themselves to a match at WrestleMania. Miz says some fans must have snuck in.

Back in the ring, Miz says not even they can decide who their challengers should be. Morrison says they should take the night off as Miz agrees. Heavy Machinery’s song hits and out come Otis and Tucker.

Otis lifts Morrison up as Tucker is tagged in. Tucker takes over from the vertical suplex and drops he drops Morrison. Tucker goes for the cover but Morrison kicks out. Tucker sends Morrison to the ropes but Morrison rolls and tags Miz into the match.

A hip toss by Tucker onto Miz. With Miz in the corner, a splash by Tucker as Otis is tagged in. A shoulder tackle by Otis takes Miz down. Otis goes for the cover but Miz kicks out. Tucker is tagged in. They double team Miz. In comes Morrison but they double team him. Morrison is clothesline to the outside of the ring. Tucker gets on the ring apron and a running flip onto Morrison and The Miz.

A running knee onto Tucker. Morrison again goes for the cover but Tucker kicks out. Tucker is in the corner and Miz is tagged in. They double team Tucker taking him down. Miz mocks Otis with his dancing. Miz goes for a right hand but Tucker blocks it. Tucker knocks Morrison off the ring apron and knocks Miz down.

Dolph Ziggler’s music hits and out comes Ziggler as Otis turns his attention to Ziggler. Miz knocks Otis off the ring apron. He hits Tucker with a DDT. He goes for the cover but Tucker kicks out. Morrison hits Otis out with a super kick. Ziggler is on commentary.

A glitch in the camera.

Otis is tagged in. He knocks Miz and Morrison down. Otis with a powerslam on Miz. He turns around and slams Morrison down on the mat. Otis with a splash taking both men down. Otis goes for the caterpillar and as he’s about to land it, Ziggler gets on the microphone. He mentions Mandy and tells him he wants to see some pictures.

We see pictures of Ziggler and Mandy together on the screen. Ziggler riles Otis on and Otis is getting mad. He turns his attention to Ziggler and gets out of the ring. He grabs Ziggler and throws him down. Otis grabs a chair but Miz and Morrison grab the chair from behind and throw Otis back in the ring. Otis clotheslines them to the outside.

Otis throws Morrison into the steel steps and he slams Miz into the announce table. Otis throws Miz into the ring post. Morrison jumps off the announce table but Otis catches him and slams him into the ring post. He runs towards Miz and Morrison as both men are sent through the barricade. Otis grabs a chair but Tucker tries to talk him out of it but Otis hits both men with the chair as the bell rings.

Winners: The Miz and John Morrison by disqualification

Tucker ties to stop Otis but he can’t. Ziggler is on stage watching Otis throw chairs around.

Michael Cole introduces both men to the ring. He asks them to sit down but both men throw their chairs outside of the ring. Cole says no one saw this match coming. He asks Goldberg that he asked who was next, who did he expect to accept the challenge? Goldberg says he was hoping it would be Roman Reigns but he didn’t think Roman had the balls to come out and face him.

Roman Reigns says he’s been fortunate. All the greats chose him. John Cena, Triple H, Brock Lesnar, The Undertaker and they all lost to him too. Roman says Goldberg won’t be any different. We see a tweet by Roman from a few months ago where he mentions headbutting a door would be stupid, hinting at Goldberg. Roman says he sees a little bitch bulldog in his yard, holding a title he never earned. Roman signs the contract.

Goldberg says he has been destroying steel doors all across the world for years with that headbutt. And come WrestleMania, he’s going to be the next victim. Goldberg signs the contract. Goldberg grabs his title and flips the table over as both men go face to face.