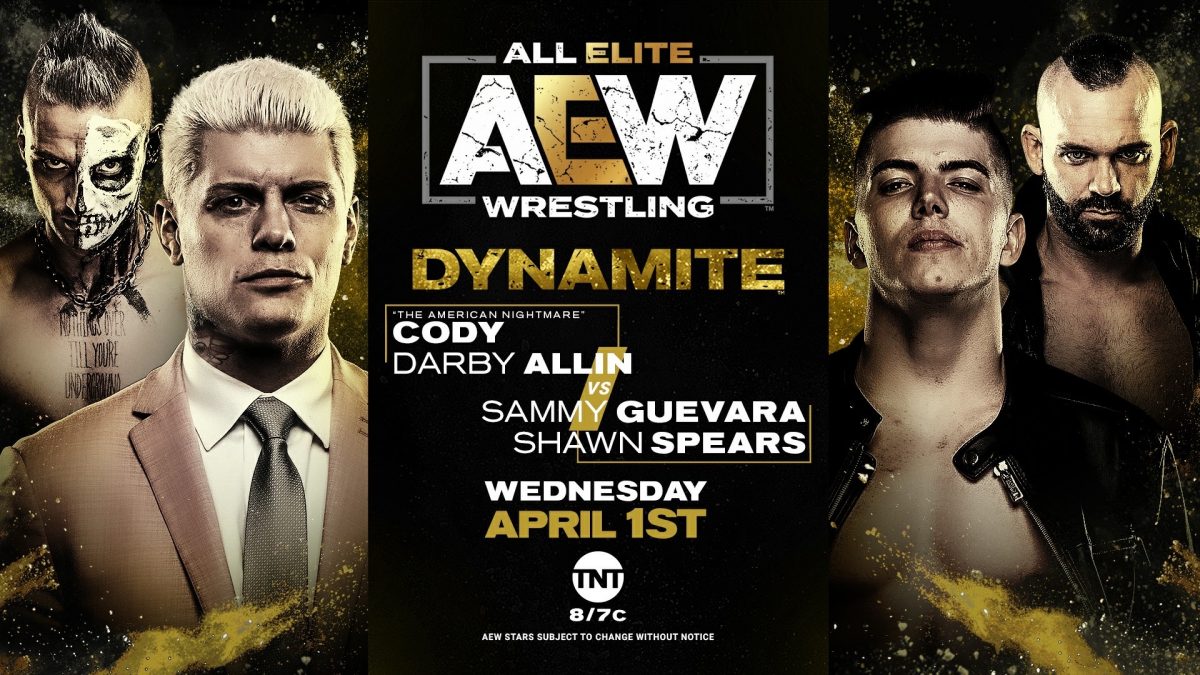 “Dynamite” opens up with Tony Schiavone on commentary with Cody Rhodes. There are a number of wrestlers around ringside but not as many as the first week of these empty arena events. The tournament matches for the first round were revealed as Cody Rhodes vs. Shawn Spears, Sammy Guevara vs. Darby Allin, Kip Sabian vs. Dustin Rhodes and Lance Archer vs. Colt Cabana. The tournament begins next week. 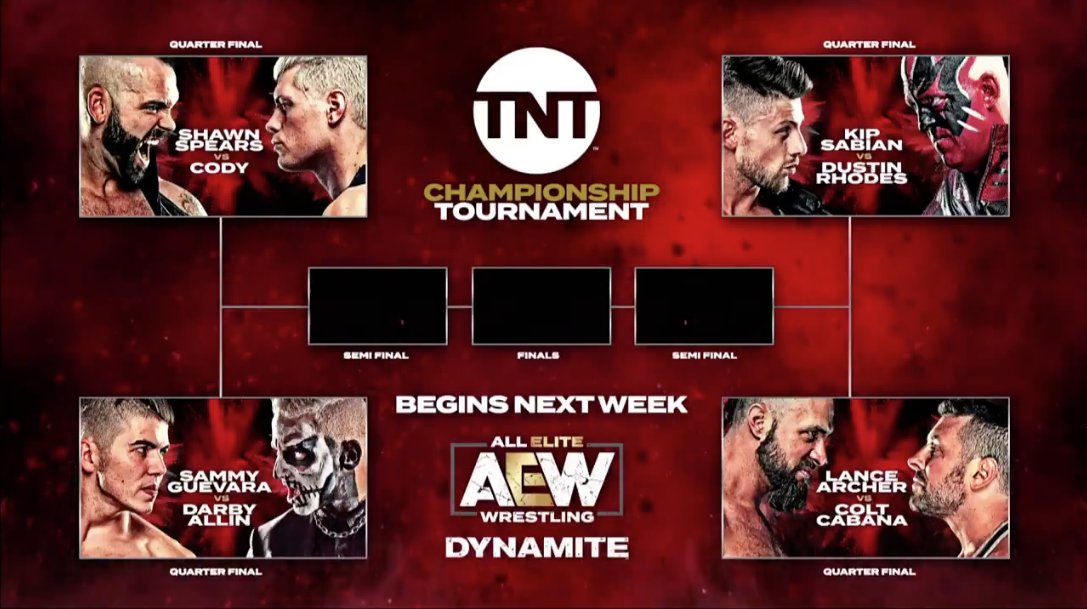 Cody points out that Omega is on a six-match win streak currently and brings up matches these two have had in Japan in the past. After some early mat wrestling, Trent catches Omega with a Meteoroa and the two start breaking out into a chop and kick fight.

Trent catches a charging Omega with a Mushroom Stomp, and as Omega rolls to the floor to get some social distancing space, Trent hits an Asai Moonsault. The Best Friends hug and this waste of time allows Omega to recover and hit a Somersault Plancha over the top onto all of them.

Omega rolls to the floor to escape Trent’s onslaught but Trent follows him out and slams his hand into the ring apron repeatedly. Trent attempts to Knee Drop the hand but Omega rolls away and then German Suplexes Trent off the apron.

Omega tosses Trent into the barricade repeatedly and then Omega Powerbombs Trent into a giant post that was near the ring. This may actually be an inside practice facility for the Jaguars and that could have been the field goal post. Back in the ring, Omega drops Trent across his own knee with a Brainbuster for a nearfall.

Omega goes for a Rolling Fireman’s Carry but Trent counters into a Tornado DDT. Trent hangs Omega up in the ropes and hits a crazy Sliding Snap German as Kenny was hanging in the ropes.

Trent hits a Half Nelson Suplex but Omega catches him with a Flying Knee. Omega goes for a Suplex but Trent counters into a Piledriver for a nearfall. Trent goes for a Running Knee, but Omega moves out of the way and attempts a Lariat. Trent blocks it and goes for a Tornado DDT but Kenny blocks it and hits a Snap Dragon!

Trent attempts to Piledrive Omega on the apron but Omega backdrops him back into the ring. Omega leaps to the top but Trent climbs up with him and hits a German Superplex after initially slipping. Trent hits a Flying Knee for another nearfall.

Trent attempts the Reverse Tombstone attempt but Omega blocks and hits a Pump Knee followed by the One Winged Angel for the pin.

Highlights from the bizarre Matt Hardy-Jericho confrontation from last week is shown. Hardy says that he will “break” the Inner Circle and he has sentenced Jericho to “DELETE!”

Shida blocks an armdrag attempt from Jayy but misses a dropkick and Jayy catches Shida with a Running Knee. Jayy hits the ropes but runs right into a Tilt-A-Whirl Backbreaker from Shida. On the outside Shida delivers a Running Knee Lift as Jayy was laying on the apron.

Britt Baker talks trash to Shida from behind the barricade but Shida goes back into the ring and exchanges strikes with Jayy. Shida destroys Jayy with a big Forearm Smash and follows up with a Brainbuster attempt. Jayy blocks it and hits a Heel Hook. Jayy hits a Rolling Neckbreaker for a nearfall.

Shida attempts a Vertical Suplex for a nearfall of her own. Shida hits a Running Knee to the back followed by a Michinoku Driver for the pin.

A pre-tape segment highlights Jon Moxley’s issues with The Inner Circle. Moxley says he is a “miserable son of a bitch” right now after what they did to him. Moxley says that he will defend the AEW Title with his life. Hager says he isn’t in AEW to send the fans home happy or get applause, he is here to win. Moxley says that he knows Hager inside and out, so he isn’t scared of him but he does understand he could strangle him into unconsciousness with his bare hands.

Hager says that he’s had his hands on Moxley and he knows that he isn’t as strong as he is or as capable as he is. Guevara says that Hager is a monster. Moxley says that he knew that Inner Circle would send their “big gun” at him so that is why he came after him first a few weeks ago.

Jericho says that he will teach Moxley a lesson. He says that he has a rematch coming but he’s not going to use it yet because he wants Hager to teach him a lesson first. Jericho says that if Hager wins the World Champion then that is great because it teaches Moxley a lesson and makes there two World Champions in the Inner Circle. Hager says that a champion has to be willing to do anything to earn that championship because if you give less than everything you have it won’t be enough. “I guarantee you Mox will get everything Jake Hager has,” he says.

Moxley says that Hager is just a man and he has a weakness that he will find. “He is just another Goliath,” Moxley says. “David will just have to find another way to slay this big bastard.”

It’s revealed that Hager will challenge for the World Title in two weeks in a No Holds Barred Match.

Roberts says that Cody may just be smarter than he thought he is and maybe he’s smart enough to be afraid. Roberts wonders if Cody’s “better half” is keeping him from accepting their challenge because he knows she wears the pants in their relationship.

Colt Cabana joins commentary for the next match.

Archer murders some random guy at ringside as he comes down and then obliterates Stunt with a clothesline. Archer dares Stunt to hit him back and when he obliges Archer destroys him with a big right hand. Archer chokes Stunt and then Suplexes his ass clear across the ring!

Archer lays across Stunt’s head and screams at him to just quit before tossing him way up in the air and dropping him with a Sidewalk Slam. Archer goes for a Shortarm Clothesline but Stunt is able to slide underneath and to the floor. Stunt runs away from Archer and then hits a Tope Suicida but Archer just shrugs it off. Stunt goes for another one but Archer rolls in the ring and catches him.

Archer picks Stunt up and then literally chokeslams him off the apron and on top a few of the wrestlers that were behind the barricade.

In a vignette, Brodie Lee says that he knows how everyone feels during these dark times. He says that he once was lost and beaten down but now he stands before everyone as the Exalted One. A masked member of the Dark Order is asked to stand before them and Lee screams at him for not doing things right like calling him “Mr. Brodie” or saying their “We are one” phrase right.

Brodie approaches another member of the Dark Order for yawning and tells him that tiredness shows weakness. Lee tells him to never yawn in his presence again.

I have no idea who “8 & 9” are. Marshall teases putting on the Dark Order mask before the match but decks the Dark Order guys. Rhodes and Marshall hit 8 with an Assisted Neckbreaker. 8 and 9 double-team Marshall in their corner.

Marshall fights out and hits a Vertical Suplex on 9 and a Flatliner on 8. Rhodes hits an Uppercut on 8 and connects with an Atomic Drop followed by a Bulldog. Rhodes hits a Snap Powerslam and both Dark Order members roll to the floor. Rhodes hits a Somersault Plancha off the apron onto one of them and Marshall dives onto the other.

In the ring, The Natural Nightmares hit a Neckbreaker/Powerslam combo for the pin.

Brodie Lee comes out and stares at Dustin before just walking past him. Brodie then kills 8 with a Powerbomb and just starring at the other.

Jericho cuts a promo from his hot tub. He says today is April Fool’s Day and he’s never seen a bigger group of fools than The Elite. As he is ranting on all the members of The Elite, Vanguard 1 flies above head. Jericho calls Cody the “Tiger King himself.” Jericho says that The Elite can’t escape the Blood and Guts match and what the Inner Circle will do to them.

Jericho notices Vanguard 1 and starts to apologize to it but can’t quite say the word “sorry” to it. He again tries to recruit Vanguard 1 and offers it a tiny Inner Circle shirt. Vanguard 1 flies away and Jericho throws his bottle of win at it before sicking his dogs on it as it flies away.

The Young Bucks are shown in a pre-tape. They have a ring set up at their home for Nick Jackson to train in. Nick says he has no memory of the assault, which he says is the scariest thing. Nick says sometimes you take things for granted and what happened to him opened both he and Matt’s eyes. Nick says he feels pretty good but doesn’t think he’s ready to come back yet.

In the opening round of the TNT Title Tournament, Guevara will face Allin and Cody will face Spears next week. Neither team is able to gain the advantage early but Guevara actually vlogs during the match and starts hitting on Brandi at ringside. Brandi snatches his phone and walks away. Allin then crashes into Guevara with a Flying Hip Attack sending him into the barricade.

Cody and Allin both dive onto Guevara and Spears with Tope Suicidas.

Guevara breaks it up with a Shooting Star Press and then he goes for a Springboard Cutter of his own only to eat a Crossrhodes from Cody. Spears pulls Cody out and tosses him over the barricade where the heels nearby beat him down.

Spears hangs Allin up on the barricade and Guevara dives off the apron with a Missile Dropkick to the back of Allin. Cody hits a Tope Suicida onto Spears and Guevara. Back in the ring, Cody walks into a C4 from Spears. On the outside Guevara and Spears double team Cody as Allin climbs the field goal post and dives off with a Coffin Drop onto both of them!

Allin rolls Spears into the ring and sets up for a Coffin Drop but Guevara cuts him off and tosses Guevara to the floor. Cody climbs up and hits a Reverse Superplex on Guevara only for Spears to hit Cody with a Frog Splash when he lands! Guevara tosses Spears a chair but Allin pulls I away from him. Guevara pulls the chair from Allin and Spears rolls him up for the pin!

After the match, Cody tries to check on Allin but eats a Forearm Smash from him.