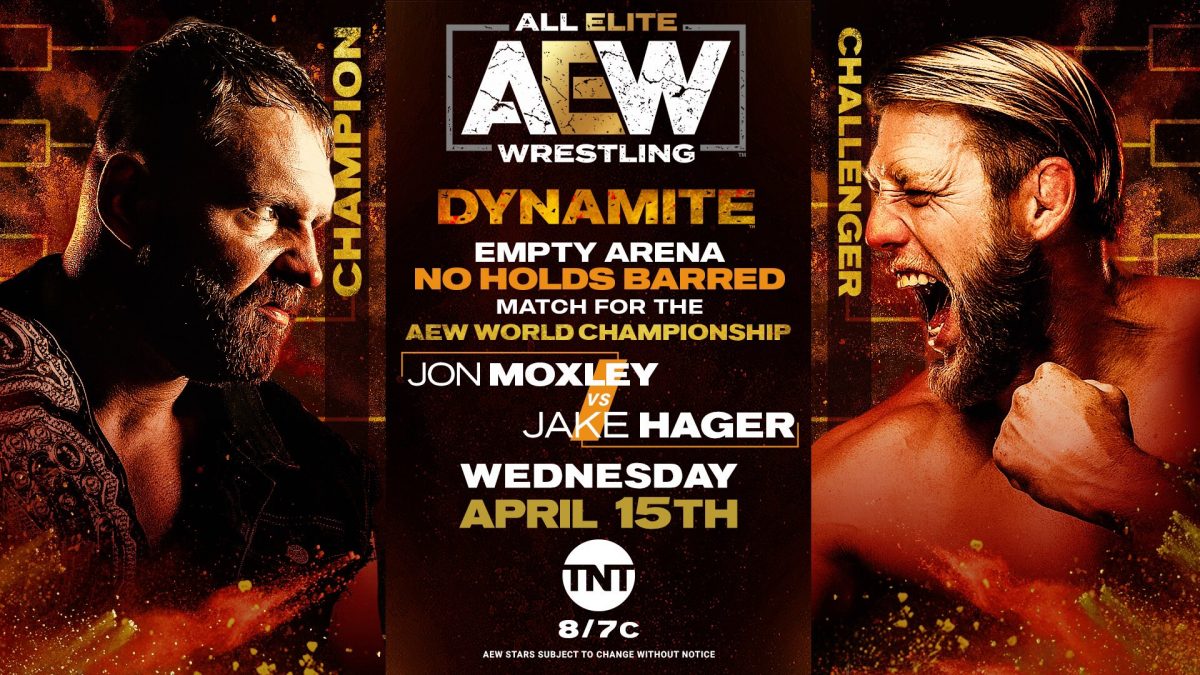 “Dynamite” opens up with Jake Roberts in a pre-tape. Roberts says that the TNT Championship was made for Lance Archer because he commands attention and he is someone that was made to be put on the forefront. “In our minds this TNT Championship is a bone,” Roberts says. “Do you really want to come and try to take away a bone from this dog?”

Roberts says that Archer was forced out of this country to Japan just to make a living and he’s back and he’s pissed off. “He has something that one of you people have,” Roberts says. “He’s a freaking animal. Listen to me… or regret it. It’s your choice.”

A video package highlights Colt Cabana and his career trajectory. Cabana says that Archer dominated Japan but Cabana says he was “dominant” in Japan, China, and Australian and all over the world for years before Archer. “My track record is just as good or better than Lance Archer,” Cabana says. Cabana says he isn’t looking past Archer because he is a “big bad dude” but he has wrestled other “big bad dudes” and he has beaten them. Cabana says all he is thinking about right now is the TNT Championship and he is gambling on himself right now.

Archer comes out and absolutely destroys someone that was in the crowd for no reason. He then gets in the ring and decks Cabana. Cabana answers with a series of forearms but Archer just swats him aside. Cabana hits a Flying Forearm and then slides through Archer’s legs.

Cabana chops Archer repeatedly but then gets run right over by the big man. Archer charges at Cabana but he ducks down and Archer flies over the top. Cabana goes for a Plancha but Archer moves and Cabana catches himself before going over the top.

Cabana plays cat and mouse with Archer for a second and then catches him with a series of forearms. Cabana puts Archer in a Wristlock but Archer tosses him into the corner. Cabana sidesteps a charging Archer and then goes for a Flying Hip Attack but Archer catches him in midair and hits a Half Nelson Slam for a nearfall.

Archer chokes Cabana in the ropes and rakes his eyes. Archer swats away a series of chops from Cabana and decks him with a Ripcord Lariat followed by a series of Crossfaces on the mat. Archer chokes Cabana in the ropes again and then just blatantly punches him in the face. Archer hits a modified Vader Bomb off the middle rope for another nearfall.

Archer hits a Big Boot as we come back from break and taunts Colt with slaps. Cabana tries to fight back but Archer kills him with a Clothesline. Archer goes to the middle rope and dives off with a Splash but Cabana rolls out of the way. Cabana hits a Spinning Headscissors and then a Flying Hip Attack on Archer in the corner.

Cabana goes up top for a dive but as Archer rolls out of the way Cabana lands on his feet and hits a Standing Splash for his first nearfall of the match. Cabana hits a series of jabs capped off with an Atomic Elbow. Cabana hits the ropes but eats a Poooooooounce…PERIOD from Archer! Archer hits a Chokeslam and charges at Cabana as he gets back to his feet.

Cabana catches Archer with an elbow and then climbs up top but Archer crotches him and pulls him down into the Blackout for the pin.

In a video package Britt Baker talks about being a role model and gives her rules to being one. Rule #1 is fighting fair and she alleges that Shida did not fight fair against her last week. Baker says she has a deviated septum and was able to do so without her usual “admiring dedicated fans” to help her. She said she did it with her own grit, dedication and passion to be the face of the women’s division.

A video of MMA Reporter Ariel Helwani talking about Mox-Hager is shown. He predicts that Hager will win. Taz also talks about the match and predicts Mox will win.

Taz breaks down Hager’s Arm Triangle finisher. Another nice touch that AEW is trying to add to these empty arena shows.

Baker kicks Golden as she went in for a lockup and then lays her out with a Superkick. Baker hangs Golden up in the ropes and then poses for the camera as she taunts Golden and chokes her. Baker Curb Stomps Golden on the bottom rope for the pin.

It’s confirmed that Double or Nothing will go on as planned on May 23.

A segment called “The Bubbly Bunch” with The Inner Circle airs. It’s really just the members of the group talking to each other on Facetime and talking trash about The Elite. Hager was the highlight here. As his kids were sitting by, Hager tells them “ear muffs” and as they cover their ears he says he would kick the shit out of all of The Elite.

Guevara quickly takes Suge down and then taunts him. Suge hits a nice Springboard Lucha Armdrag but then eats a Flying Knee from Sammy G. Guevara hits the Delayed Brainbuster for a nearfall. Guevara chokes Suge in the ropes and stands on his back before kicking him in the face.

Guevara does some squats with Suge on his back and drops him with a Samoan Drop for a nearfall. Suge rolls Guevara up but Guevara gets back to his feet and decks Suge with a clothesline. Guevara does the Jericho pose over Suge and gets another nearfall.

Guevara goes for a Corner Splash but Suge moves out of the way and hits a Knee Lift followed by a European Uppercut. Suge goes for a T-Bone Suplex but Guevara blocks it and destroys Suge with a Flying Knee followed by a modified GTS for the pin.

Big @JohnMcCarthyMMA & @ShutUpExcalibur give their predictions on who will win tonight between @RealJakeHager & your #AEW World Champion @JonMoxley.

Let us know who you think will win by using the hashtag #HAGERVMOX
Watch #AEWDynamite every Wednesday night on @TNTDrama 8e/7c. pic.twitter.com/BczISxeGSh

Sabian and Taylor chain wrestle for the first several minutes. Taylor rolls a charging Sabian up right into a beautiful Half Crab before Sabian manages to crawl his way to the ropes and then to the outside. Sabian gains the advantage after catching a charging Taylor with a Springboard Enziguri.

Taylor gains the advantage with a series of chops and an elbow drop. Taylor eats a Knee Strike sending him to the floor but he sidesteps a Tope Suicida attempt and then hits a Release Vertical Suplex on Sabian onto the apron. Back in the ring, Taylor gets a nearfall and then attempts a Diving Moonsault but Sabian rolls out of the way and hits a Springboard Missile Dropkick for a nearfall of his own.

Sabian hits a series of elbows and then a Flying Knee followed by a Roundhouse Kick for another nearfall. Sabian tosses Taylor to the floor and Ford puts the boots to him as Sabian distracts the referee. Sabian attempts a Super Dragon Suplex off thet op but Taylor elbows him and knocks him off the top. Taylor goes for another Diving Moonsault, but Sabian moves only to run right into a Michinoku Driver.

Sabian hits a Slingshot Brainbuster for another nearfall. Sabian goes for a Springboard DDT but Taylor blocks it and hits an Eat Defeat. Ford gets up on the apron to distract Taylor. Sabian kisses Ford after kicking Taylor but then OC gets up on the apron and distracts Sabian.

Havoc pulls OC off the apron and Fisherman DDTs him on the floor. Ford hits a Diving Rana on Taylor behind the referee’s back and Sabian rolls him up for the pin.

After Spears tosses Law around for a few minutes he offers to get down in an amateur position for Law and Law rolls him up quickly for a nearfall. Spears elbows Law in the face and goes to town on him with chop. Spears kills Law with a Shortarm Lariat followed by the C4 for the pin.

Hager and Moxley actually mat wrestle – more like grapple or MMA based stuff – for the early moments of this match with each man trying to take down the other and going for submissions. Moxley gets Hager with an Armbar and Hager almost gets the Hager Lock in but Moxley gets to the ropes.

Moxley takes Hager down and puts him in an STF but Hager manges to escape and counter into a Choke attempt. Hager lets go and knees Moxley in the gut. Moxley hits a knee to the gut and tosses Hager to the floor. Mox follows up with a Slingshot Plancha and then puts him in a Fujiwara Armbar on the outside.

Hager breaks the hold and rains down forearms and punches on Moxley.

Hager slams Moxley into a barricade but Moxley rakes his eyes and tosses him over the guardrail into the imaginary crowd. Moxley attempts a Piledriver on the concrete but Hager backdrops him. Hager and Moxley continue to brawl in the bleachers with Mox hitting a series of knees and elbows.

Moxley wraps Hager’s legs around a railing and put him in a Bret Hart style Figure Four. Hager breaks the hold by punching at Moxley’s legs but Moxley continues to attack Hager with chops and elbows. Moxley attempts a Paradigm Shift on the concrete but Hager tosses him into the barricade.

Hager Press Slams Mox onto the barricade and then he chokes Mox with his knee as Moxley spits at him. Hager tosses Moxley to ringside and then into the ring steps. Finally back in the ring, Hager shrugs off a clothesline and knees Mox in the gut before tossing him into the turnbuckles. Hager goes for the Hager Bomb but Moxley moves and connects with a Flying Knee.

Moxley and Hager exchange elbows and knees until Hager finally caps things off with a Gutwrench Powerbomb for a nearfall.

Hager hits a series of Running Clotheslines in the corner from Hager but as Hager went for a Ripcord Lariat, Moxley ducks and hits a Lariat of his own. Moxley goes for a Piledriver but Hager trips him and goes for the Hager Lock. Moxley counters into a rollup for a nearfall.

Hager hits a series of elbows and then dives off the middle rope but Moxley kicks him in the balls and connects with a DDT for a nearfall. Moxley tries to roll Hager over for another pin attempt but Hager catches him out of nowhere with the Arm Triangle. Moxley fights to the ropes to break the hold.

Moxley rolls to the floor and Moxley follows him out and hits him with a chair. Back in the ring, Hager wedges a chair in the turnbuckle and attempts to Powerslam Mox into it. Mox blocks it and charges at Hager only for Hanger to sidestep him and go for a German Suplex. Mox blocks it and charges at Hager again only for him to sidestep and cause Moxley to crash into the chair for a nearfall.

Hager blatantly chokes Moxley and then starts hitting Moxley’s ankle with the chair. Hager puts Moxley in the Hager Lock but Moxley rolls through sending Hager to the floor. Hager quickly rolls back in right into the Paradigm Shift. Moxley hangs onto Hager and locks in a Guillotine.

Hager deadlifts Moxley back up and breaks the hold. Both men exchange elbows once again until Hager knees Mox in the nuts. Moxley throws the chair at Hager’s face and then hits the Paradigm Shift onto the chair for the pin.