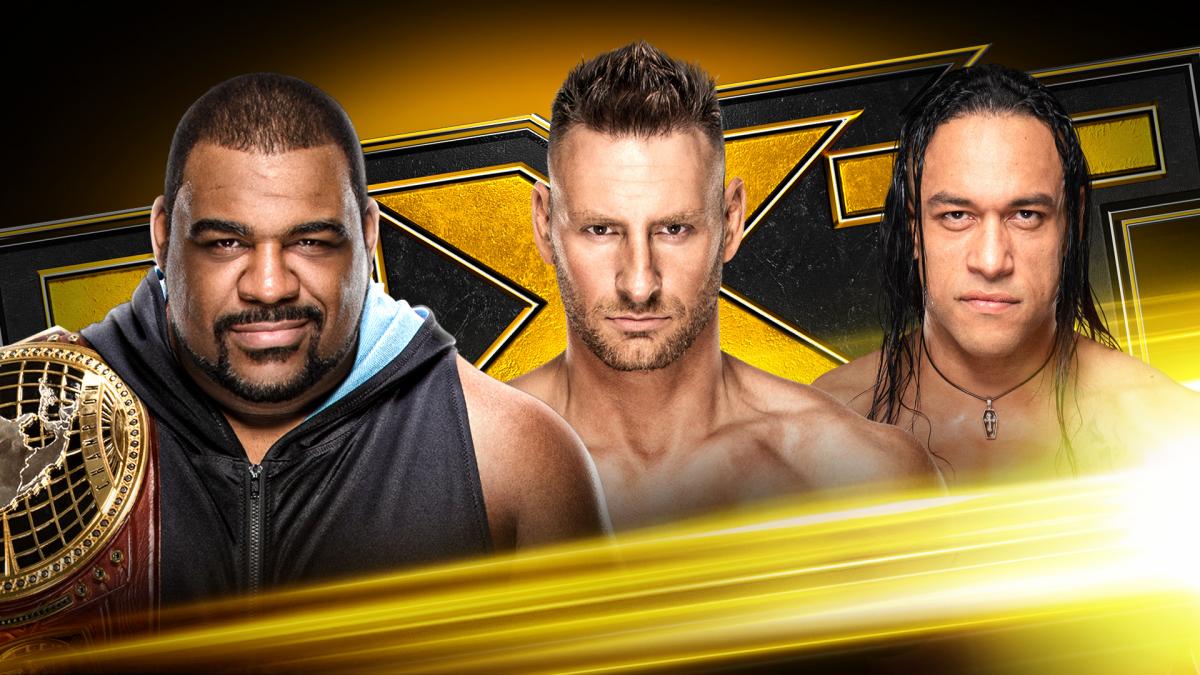 They circle the ring and lock up before Dream takes him down. Fish kicks him in the leg, but Dream soon grabs the arm and wrenches it. Dream punches him down a few times before hitting a clothesline. Dream wrenches the arm and takes him down before dropping a knee for a one count. Dream gyrates as he lifts Fish for a suplex, but Fish counters into a sleeper hold. Dream fights out, but Fish punches and kicks him down. The referee backs Fish up. Dream bounces out, but Fish big boots him back. Fish charges, but Dream jumps over the top rope to the floor to avoid him. Fish follows him out, but Dream gets back in the ring and slides back out. Dream punches him back and comes off the top rope with a double axe handle. Dream hits a back elbow and punches away at him in the corner. Fish reverses a whip to the corner, but Dream boots him back. Dream ducks a clothesline and connects with a superkick. Dream goes to the top rope, but Fish slides out of the ring. Dream comes off the top rope and hits a double axe handle to ringside. Dream’s knee is hurting. Dream gets him in the ring, but Fish goes back outside. Fish quickly drives Dream into the barricade.

We come back from the break to see Fish punch Dream off the apron to the floor. Dream gets in the ring and rakes the face before throwing Fish out of the ring. Dream grabs Fish from the apron, but Fish kicks the leg out from under him. Fish grabs the leg and hits a dragon screw. Fish rolls Dream’s tights back and targets the knee with some stretches. Fish digs his knee into Dream’s face. Dream soon kicks him back and charges, but Fish gives him a back elbow. Fish kicks him in the hamstring and punches him in the midsection. Fish knees him in the midsection to take him down. Fish connects with a knee twister before hitting a snapmare. Fish goes to the apron and hits a slingshot senton for a near fall.

We come back from the break to see Fish going for an ankle lock. Dream claws to the bottom rope to break the hold. Fish grabs the leg, but Dream punches him back. Fish goes for a sleeper hold, but Dream lifts him up. Fish slides off and jumps on the back for a sleeper hold. Dream pulls him off and hits a Dream Valley Driver for the win.

Velveteen Dream says Adam Cole needs to open his third eye and realize the experience is coming. He’s about to get worked harder than ever before.

Footage is shown of Rinku and Saurav attacking Matt Riddle last week. They stood with Malcolm Bivens after.

Malcolm Bivens is interviewed with his associates. Bivens says he’s a businessman and searched for the best tag team in the world. Rinku and Saurav are monsters. They’re a family. Bivens Enterprises. Rinku speaks in his native tongue, as does Saurav.

The bell rings, and Lumis just coldly stares at Atlas. Lumis sidesteps a punch and punches away at Atlas. Lumis clubs the back and uppercuts him. Lumis sends him into the ropes and goes for a clothesline, but Atlas ducks and hits a springboard arm drag. Atlas follows up with an enzuigiri that just stumbles him. Lumis quickly takes him down with a spinebuster and clubs away at the face. Lumis uppercuts him down and stomps the head. Atlas boots him back and hits a hurricanrana. Lumis quickly gives him a drop-toe-hold into the ropes. Lumis slides out of the ring and uppercuts him for a two count. Lumis applies a neck vice, but Atlas gets out and hits a neckbreaker. Lumis gets out of the ring to recover. Atlas hits a suicide dive and puts Lumis in the ring. Lumis hits a throat thrust before slamming him and applying an Anaconda Vice for the submission.

A promo for Killer Kross is shown.

Deonna Purrazzo has been eliminated.

Li dropkicks her back, but Blackheart soon knocks her back. Blackheart avoids some kicks, but Li avoids an enzuigiri. Blackheart then covers up before Li even lifts her leg to take a spin kick.

We come back from the break to see Li kick her back and take her down. Li goes for a spin kick to the back of the head, but Blackheart moves. Blackheart applies a unique double arm submission with a bridge for the submission.

Xia Li has been eliminated via Submission.

Aliyah has been eliminated via Submission.

Carter quickly attacks Blackheart, but Blackheart soon takes her down with a modified GTS. Blackheart goes to the ropes, but Carter crotches her on the ropes.

We come back from the break to see Blackheart kick Carter down and hit a diving senton splash off the top rope for the win.

Kayden Carter has been eliminated.

We come back from the break to see Wilde hit a flying reverse DDT for a two count. Wilde applies a chin lock before hitting an inverted facebreaker for a near fall. Wilde puts Kushida in the corner and clubs the chest. Wilde hits some shoulders to the midsection for a two count. Kushida sends him to the corner. Wilde goes for a slingshot, but Kushida kicks him in the ribs. Kushida asks if Wilde is ok. Wilde forearms him in the face, but Kushida kicks back. Wilde quickly hits a jawbreaker, but Kushida comes back with a handspring back elbow. Kushida then catches him with the big arm bar for the win.

Kushida claps for Wilde and they shake hands in the ring.

Moments ago, Joaquin Wilde is shown walking out of the NXT Arena. Wilde says he’s been losing all the time. All of a sudden, an SUV drives up and some guys in luchador masks take Wilde with them. This happened to Raul Mendoza a few weeks ago.

The bell rings, and Priest goes for a kick, but Lee blocks it and throws him. Dijakovic grabs Priest by the throat. They exchange some blows before all three men kick each other simultaneously.

We come back from the break to see Priest kick Dijakovic back before hitting a flatliner. Priest punches him down in the corner before doing the 10 punches in the corner. Dijakovic quickly lifts him, but Priest counters into a DDT. Lee breaks it up. Lee clotheslines Priest out of the ring. Priest quickly kicks Lee back and goes to the top rope, but Lee crotches him on the top rope. Lee goes to the second rope and deadlifts Priest up, but Priest knees him in the head. Priest elbows him and clubs the back. Lee applies a bearhug on the second rope, but Dijakovic comes up and hits a bell clap. Dijakovic gets Lee up in the electric chair. Priest comes off with a spin kick Doomsday Device!

They slowly get to their feet. Priest and Dijakovic go back and forth kicking Lee before hitting a double chokeslam. Dijakovic lifts Priest up for Feast Your Eyes, but Priest gets out. Priest sends him to the corner and sets up for a Crucifix Bomb. Priest hits it over the top rope onto Lee, but Lee catches him! Priest then wipes them out with a somersault senton!

We come back from the break to see Dijakovic go for a moonsault, but he crashes and burns when Priest moves. Priest follows up with a chokeslam on Dijakovic for a near fall. Priest sizes him up for a kick, but Dijakovic moves. Dijakovic goes for a Choke Bomb, but Priest counters into a Reckoning attempt. Dijakovic gets out and goes for a release suplex, but Lee catches him! Lee uses Priest’s body to swipe Dijakovic down. Lee powerbombs Priest onto Dijakovic’s back four times before hitting a Spirit Bomb! Dijakovic somehow breaks it up.

Dijakovic soon gets to his feet, and Lee annihilates him with a spinebuster. Lee splashes Priest in the corner before going to the second rope. Priest hits a pair of kicks to the face before going for a super hurricanrana. Lee counters and powers him up for a super Spirit Bomb, but Priest comes back with a super hurricanrana! Dijakovic comes off the top rope with an elbow drop on Lee out of nowhere. Priest and Dijakovic hit each other with stereo kicks and fall on Lee for a near fall!

Priest and Dijakovic grab each other by the throats on the apron. Lee hits them with Grizzly Magnum. Lee then lifts them up on the second rope, but they push him off. Dijakovic kicks Priest away and hits a twisting moonsault for a near fall! Priest goes under the ring and grabs the nightstick. Dijakovic blocks a shot and hits Feast Your Eyes on Priest! Lee then Pounces Priest over the top rope! Lee follows up with a Big Bang Catastrophe for the win!