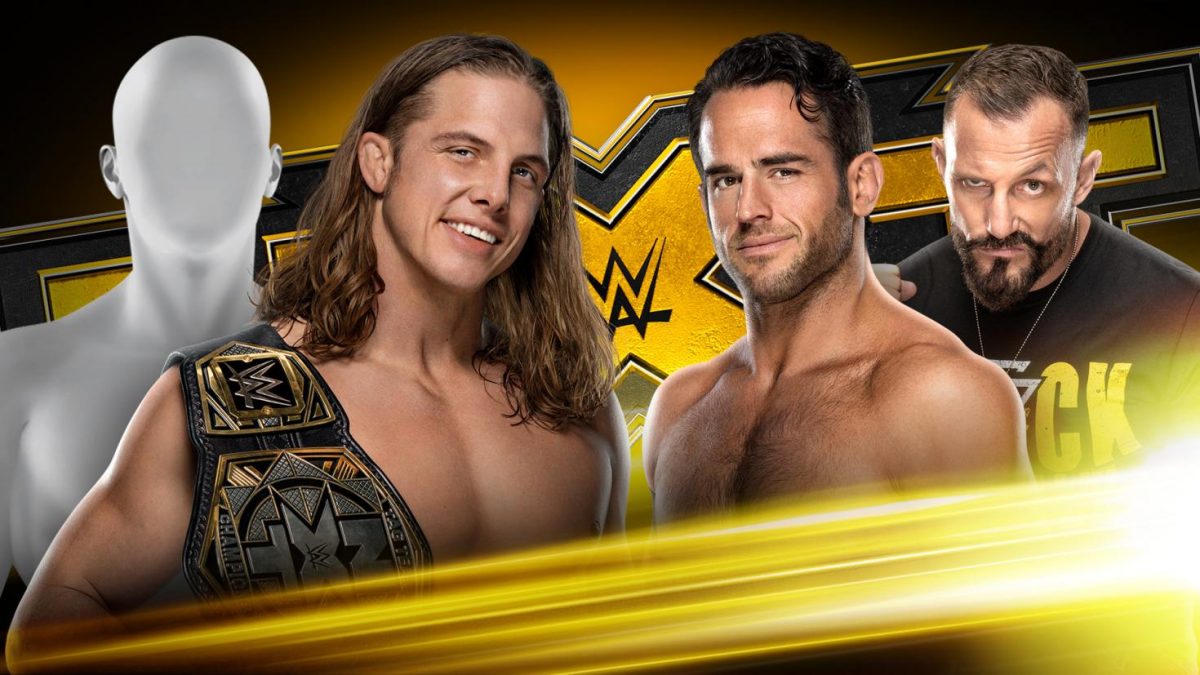 They lock up, and Balor applies a waistlock. Balor takes him down and cinches in a side headlock. Aichner fights up and twists out. Aichner takes him down and attacks the arm. Balor fights out, but Aichner applies a side headlock. Balor gets out, but Aichner applies a waistlock before throwing him across the ring. Marcel Barthel distracts Balor, and Aichner continues to attack. Balor rolls through a sunset flip and dropkicks Aichner. Balor chops the chest before reversing a whip to the corner. They hit the ropes, and Balor gets out of a fireman’s carry and hits a falling elbow drop. Barthel distracts again, but Balor stares him down. Balor kicks Aichner in the ribs and stomps him. Aichner rolls out of the ring to recover, so Balor hits a baseball slide.

We come back from the break to see Balor applying an arm bar. Aichner fights up, but Balor grounds him. Balor hits an arm drag, and Barthel grabs the ankle. Aichner then drops Balor with a tilt-a-whirl backbreaker. Aichner attacks Balor and clubs him before whipping him hard into the corner. Aichner attacks him in the corner before whipping him hard into the corner again. Balor soon fights back and kicks, but Aichner chops and clotheslines him for a two count. Aichner goes for a powerbomb, but Balor gets out, takes him down, and hits a double stomp. Balor follows up with a Sling Blade before punching Barthel off the apron. Aichner rolls Balor up for a two count before powering him up and throwing him across the ring!

Balor rolls out of the ring to recover. Aichner distracts the referee as Barthel attacks Balor. Aichner goes for a running hip attack into the steps, but Balor moves. Balor hits Barthel with a Sling Blade on the floor before dropkicking him through the barricade. Aichner quickly attacks Balor and puts him in the ring for a moonsault, but Balor moves. Balor dropkicks him into the corner and hits the Coup de Grace! Balor follows up with 1916 for the win.

Li immediately takes Aliyah down. Before the match, Aliyah admitted she attacked Xia Li before their match a few weeks ago. Aliyah gets out of the ring to get away. Aliyah runs into the ring and puts herself through the ropes to keep Li back. Aliyah then hits a pump kick for a two count. She sends Li to the corner and attacks her. Li pushes her back and charges, but Aliyah hits a Thesz Press for a two count. Aliyah applies a rear chin lock. Li fights out and rolls her up for a two count. Aliyah hits a forearm and goes for a slam, but Li gets out. Aliyah sends her to the corner, which looked terrible. Li comes back with some right hands and a clothesline followed by some kicks. Li hits a running forearm followed by a dropkick. Li hits a spin kick to the back for the win. 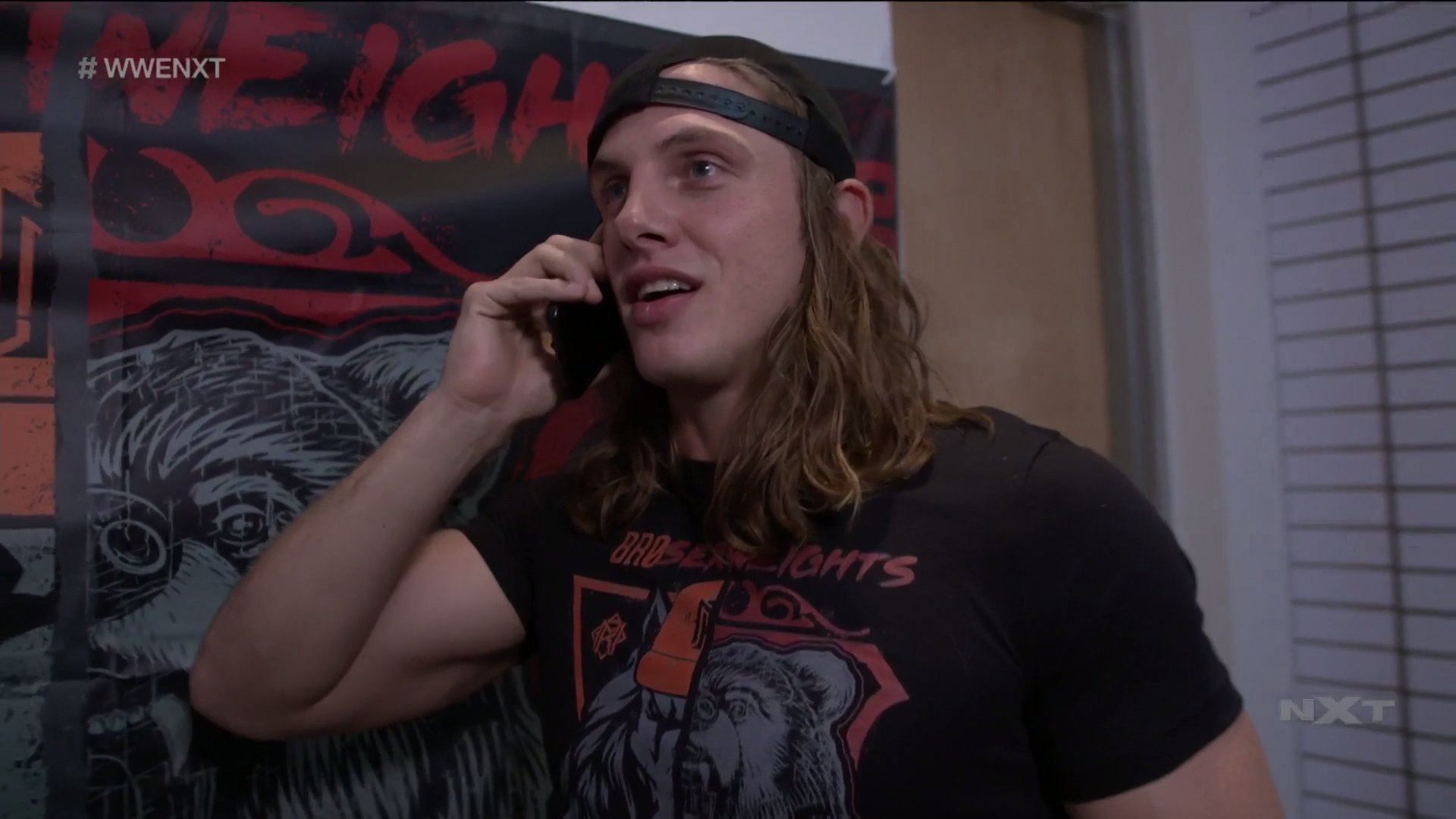 Matt Riddle is shown talking to Pete Dunne on the phone about who his tag team partner will be.

The bell rings, and they lock up. Scott takes him down with an arm drag for a no count. Scott grabs the arm and wrenches it. Tozawa flips through and kips up before hitting a hurricanrana, but Scott lands on his feet. Scott slides under a clothesline and hits a head-scissor takeover. Tozawa chops the chest, so Scott chops him back. They exchange shots before Tozawa jabs him in the jaw. Tozawa forearms him back before hitting the ropes, but Scott follows him in and uppercuts him. Scott hits the ropes, but Tozawa follows him in and hits a pump kick over the top rope. Tozawa gets on the apron and stomps Scott. Scott gets on the apron, and Tozawa chokes him on the ropes. They exchange strikes on the apron before Tozawa knocks him to the floor. Tozawa grabs him, but Scott leaps up and hits a head-scissor takeover (sort of) off the apron to the floor!

We come back from the break to see Scott applying a chin lock. Tozawa fights up and hits a back body drop to the floor. Tozawa signals for a suicide dive, but Scott moves. Tozawa gets on the apron and hits a cannonball senton to the floor. Tozawa lands on his head and looks to be in pain. Tozawa gets him in the ring and hits a missile dropkick for a near fall. Tozawa fights up, but Scott elbows out. Tozawa flips through a back suplex before applying an octopus stretch. Scott powers out, but Tozawa counters into a dragon sleeper. Scott fights out, so Tozawa applies a guillotine. Scott powers him up and hits a brainbuster.

Scott sets up for his finisher, but Tozawa counters out. Scott soon takes him down with a wild counter into a German Suplex. Scott quickly connects with the House Call for a near fall. Scott puts him in the corner and onto the second ropes. Tozawa kicks him back before hitting a belly-to-belly overhead suplex into the corner! Tozawa follows up with a jumping spin kick before going to the top rope. Tozawa hits a leaping Senton Splash for the win!

Tozawa is interviewed after the match. Tozawa says he will keep fighting and winning. He will become the Cruiserweight Champion again.

Shotzi Blackheart runs down and attacks Kai with her helmet. Gonzalez angrily grabs Blackheart and pulls her onto the apron for a chokeslam. Nox quickly rolls Gonzalez up for the win.

Miles asks if there’s anyone home in Lumis’ head. Lumis viciously takes him down and punches away at him. Lumis pulls him up by the hair, but Miles dropkicks him away twice. Miles uppercuts him and hits the ropes, but Lumis hits him with a spinebuster. Lumis slides around the canvas stalking Miles. Lumis pulls him up by the hair and hits a sit-out uranage into an Anaconda Vice for the win.

Velveteen Dream is becoming frustrated with NXT Champion Adam Cole not having arrived yet.

NXT Champion Adam Cole is shown at his pool. Cole says he hopes that “stupid” Velveteen Dream didn’t think he was actually going to show up. They need to focus on reality. Dream will never get a title show. The reality of the world is there is nobody in NXT or WWE that deserves a shot at his title. They have a lot more to focus on. The Undisputed ERA will focus on regaining what belongs to them by taking the NXT Tag Team Championship. The Undisputed ERA will be whole again.

Finn Balor all of a sudden comes up from behind Dream. Balor says he doesn’t know Dream or like him. Up until this point, he hasn’t said one single word to him. This will be his first. When you talk about the greatest NXT Champion of all time, you’re looking at him. Ignorant comments will get you a date with the prince. Balor walks off. Dream tells Balor to be a gentleman and pick him up next Wednesday night. Balor stares at him and walks off. Dream snaps his fingers, and his music plays.

Malcolm Bivens is backstage with Rinku and Saurav. Bivens congratulates whoever wins the NXT Tag Team Championships tonight because they’re going from their shoulders to the waists of Rinku and Saurav.

Pete Dunne appears on the screen. He wishes he could be there to defend the NXT Tag Team Championship, but in his place will be Timothy Thatcher.

Matt Riddle will start against Bobby Fish. They tease locking up, but Fish talks some trash. Riddle quickly takes him down before hitting a headlock takeover. Fish grabs the arm, but Riddle applies a head-scissor. Riddle goes for a guillotine, but Fish gets to the bottom rope immediately. Roderick Strong distracts Riddle, and Fish capitalizes. Riddle quickly fights out and applies an arm bar. They go for a counter and Fish lands bad on his shoulder.

We come back from the break to see Thatcher take Strong down and apply an arm bar. Strong fights out, but Thatcher picks the leg and applies a bow and arrow stretch before pinning him for a two count. Strong kicks him back and tags Fish in. Fish takes Thatcher down and hits a slingshot senton for a near fall. Fish stomps the leg, but Thatcher soon takes him down. Fish applies a submission, but Thatcher gets out with a vicious knee. Fish powers him to the corner, and Strong tags in. Thatcher quickly hits an uppercut, and Riddle tags in. Riddle hits a running forearm. Thatcher follows up with a butterfly suplex before Riddle hits a PK for a near fall.

Thatcher hits Strong and Fish with a pair of belly-to-belly side suplexes a piece before uppercutting Strong. Thatcher strikes away at Strong. Strong viciously chops the chest, but Thatcher hits a step-up enzuigiri. Thatcher goes for a Fujiwara Arm Bar, but Strong gets to the ropes. Strong kicks him back and forearms him. Thatcher quickly slaps him in the face to take him down before setting up for a butterfly suplex. Fish distracts him. Strong kicks Thatcher in the head before tagging Fish in. Fish hits a running forearm for a near fall. Strong tags in, and they double-team Thatcher for a near fall. They pause for a few and move awkwardly before Riddle shows up. Thatcher applies the Fujiwara Arm bar to Strong for the win.

Tommaso Ciampa shows up on camera backstage. Ciampa says he’s done with this. He’s done with Johnny Gargano and Candice LeRae. Ciampa congratulates Gargano on being the better man. All of a sudden someone grabs Ciampa and slams him on the concrete. The camera is knocked over. Ciampa falls in front of it unconscious. A black pair of boots stand near Ciampa’s head. Killer Kross also comes up and says into Ciampa’s ear, “Tick tock.”