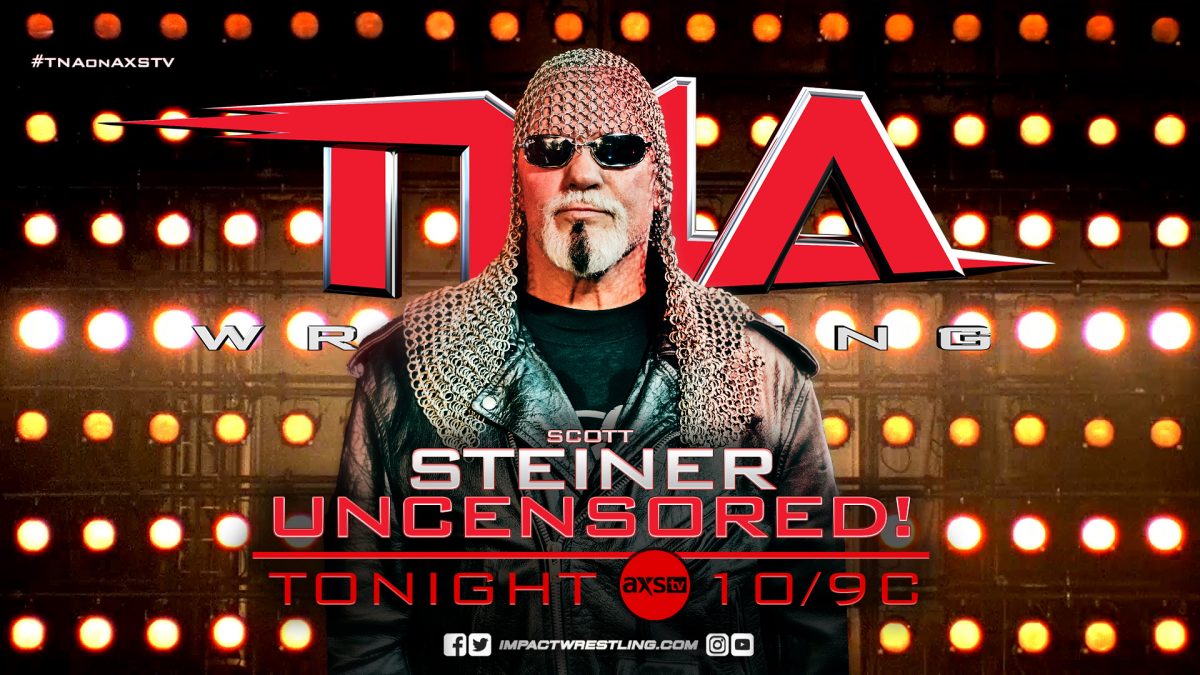 For one-night-only, the stars of TNA Wrestling return for a special event exclusively on AXS TV. Scott D’Amore and David Penzer are on commentary.

Former Tag Team Champions Hernandez (with LAX) and Chase Stevens (with The Naturals) do battle in the opening contest. Hernandez attempts the Border Toss in the early going but Stevens counters into a German Suplex. Stevens continues his attack with a big Superplex. Hernandez connects with the Border Toss to score the win.

The Knockouts of TNA changed the landscape of women’s professional wrestling forever.

Created by TNA, Ultimate X is one of the most high-risk, high-reward match types in all of professional wrestling.

Ace Austin joins Jimmy Jacobs in the backstage area. Ace says he knows something about Total Nonstop Action – that’s what the XXX-Division is all about.

It's not about weight limits, it's about NO LIMITS. #TNAonAXSTV pic.twitter.com/YcBNi2c0pI

Different eras of TNA collide in this tag team match. David Penzer notes that Suicide later became Manik but now, they have somehow split into two different entities. Manik hits both Swinger and Kash with a double dropkick. Manik launches himself off the back of Suicide and connects with a flying elbow on Swinger. Manik hits the ropes but Kash kicks him in the back, allowing Swinger and Kash to take control. Swinger and Kash slow the pace down as continue to wear down Manik. Suicide finally receives the hot tag after Manik breaks free. Suicide goes on the attack as Manik joins in for a double team flurry. Suicide hits Kash with a Swanton off the top to win.

Video: King of the Mountain Match

The stars of IMPACT Wrestling try to wrap their head around the rules of TNA’s signature King of the Mountain Match.

The rules of King of the Mountain are simple, right? RIGHT?! #TNAonAXSTV pic.twitter.com/YD8J6tnAgy

Scott Steiner has a microphone as the commentators warn us that anything can happen. Steiner speaks his mind on PC culture when he’s interrupted by Joseph Ryan of Cancel Culture. Joseph calls out Steiner for being inappropriate, stating that he should’ve been cancelled a long time ago. Joseph gives Steiner an opportunity to put his past behind him and join Cancel Culture as Big Proper Pump. Steiner declines and tosses Joseph to the outside before celebrating with the crowd.

Raven explains the history of his signature match type – the Clockwork Orange House of Fun. It’s a brutally hardcore match designed to hurt and scar the competitors, all for Raven’s amusement.

The Clockwork Orange House of Fun match was @theraveneffect's most sadistic creation – and mostly for his own amusement. #TNAonAXSTV pic.twitter.com/vYgSiPHpNo

The fight spills to the outside in the early going as Fulton sends Rhino crashing into the steel ring post. Fulton crashes and burns off the top rope as Rhino avoids his hulking body. Rhino hits a series of elbows, followed by a belly-to-belly suplex. Jake and Dave Crist hit the ring to attack Rhino, causing the disqualification.

Tommy Dreamer comes out in an attempt to even the odds but he and Rhino are still down 3-2. The lights go out and when they come back on, Raven is standing in the middle of the ring. Raven attacks oVe with a kendo stick as the fans chant his name. Raven approaches his arch-rival, Tommy Dreamer in the corner and shockingly helps him to his feet. But then, the real Raven shows up as he cracks Dreamer over the head with the kendo stick. A massive brawl breaks out as Suicide, Manik, Johnny Swinger, Kid Kash, Chase Stevens and Hernandez join the fight for TNA. Kash and Hernandez fly over the top rope to the floor. TNA stands tall as the one-night-only special goes off the air.