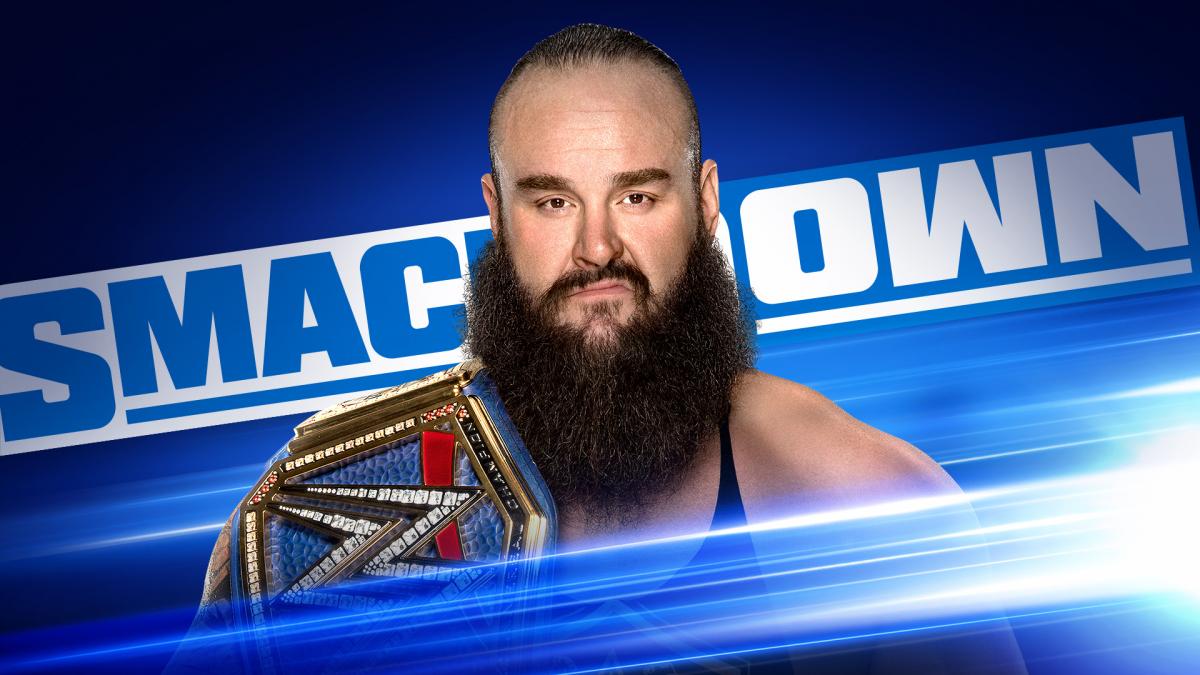 As he is talking, Shinsuke Nakamura’s song hits. He gets in the ring as Nakamura tells him that when opportunity knocks, you better open the door. Nakamura says knock, knock. Nakamura says he is supposed to say who is there. Nakamura says he is here, knocking on Strowman’s door. He heard Strowman talk about his WrestleMania moment. But the last time they saw him, they beat him.

The two are face to face as Strowman says no one tuned in to SmackDown to hear him run his mouth. He should let him enjoy his night at Universal champion as he knocks the crap out of him. Nakamura says he reminds him of an old Japanese proverb. The weak are the meat and the strong eat.

Strowman says later tonight, Nakamura is going to get these hands. He turns around and Cesaro gets in the ring as Strowman pushes him to the outside of the ring. Nakamura kicks Strowman in the head and leaves the ring.

The bell rings and we are under way. Sane with a drop kick on Bliss. Sane throws Bliss in the corner as Asuka is tagged in. She stomps on Bliss. Sane is tagged back in as they double team Alexa. Sane sends Bliss to the ropes but Bliss with a hip toss. SHe goes for the cover but Sane kicks out. Both women exchange right hands but Sane stomps on Bliss and tags Asuka in.

She knocks Cross off the ring apron and stomps on Bliss. Sane is tagged back in as they double team Bliss. Sane goes for the cover but Bliss kicks out. Asuka is tagged back in. Bliss with a drop kick on Sane knocking her down to the outside. Bliss goes after Sane on the outside but Asuka hits her with a hip attack. Asuka gets on the commentary table and starts doing commentary. Cross gets on the announce table and Asuka is knocked down.

Alexa with a drop kick. She goes for a moonsault but Sane moves out of the way and hits Bliss with a spear. She goes for the cover but Bliss kicks out. Both women back up, a right hand by Alexa and Nikki is tagged in. In comes Asuka with a big kick taking Bliss out. A spinning back fist by Sane takes Nikki down. Asuka is tagged in. She lifts Nikki up as Sane jumps off the top rope knocking Cross down. Asuka with the Asuka lock but Bliss breaks it up. Sane knocks Alexa down.

Sane is tagged in. She climbs the top rope and goes for the inSane elbow but Cross moves out of the way. Cross knocks Asuka down, rolls under Sane and tags Bliss in. Alexa with a kick followed by a DDT. She goes for the cover but Asuka breaks it up. Cross jumps off the ring apron towards Asuka but Asuka knocks her down. Bliss climbs the top rope and lands the Twisted Bliss onto the outside on Sane and Asuka.

Bliss throws Sane back in the ring and climbs the top rope. Bliss jumps, Sane moves, Sane goes for a clothesline, Alexa ducks, Cross is tagged in but Bliss hits Sane with a right hand. Cross hits Sane with a spinning neck breaker. She goes for the cover and gets the pin.

Elias is on guitar. He says at WrestleMania, he put an end to that degenerate clown King Corbin. He’s even standing where Corbin tried to end his career. He thanks the fans for the support he got. The song he has for tonight is “Walk with the King”.

“WrestleMania, where everybody could sing. Because Elias came and he dethroned the king. If you doubted me, I couldn’t blame you at all. Because from this perch Elias took a hell of a fall. Just like Simba, I returned. Because for a new king, my people yearned. I looked towards the horizon, what do I see. Money in that briefcase would look good to me. Id turn it into a case, then Ill become champ. In the world sing, walk with Elias. I want to hear the world sing, walk with Elias. Walk with the king.”

They show a clip of the feud between Dolph Ziggler and Otis with Mandy Rose and Sonya DeVille involved.

Dolph Ziggler and Sonya DeVille walk down to the ring. They get in the face of Graves and Cole telling them that it was doctored footage. They want the best for Mandy. As they are talking, Heavy Machinery’s music hits and out comes Tucker with a microphone. He tells Dolph he knows he’s busy but he’s still into Mandy but he has pictures for him to see. We see pictures of Otis and Mandy working out. Tucker says after what Dolph did to him last week, they have unfinished business and will take care of it right now.

Tucker throws Ziggler shoulder first into the steel steps. With the referee distracted by Sonya, Ziggler pushes his thumb into Tucker’s eye. He runs towards Tucker but Tucker catches him and throws him on top of the announce table. Tucker throws Ziggler back into the ring. He sends Ziggler to the ropes and a massive powerslam. He goes for the cover but Ziggler kicks out.

The FireFly Fun House, that you can’t see me crap finally disappeared and that’s good news. Their new single Hey, Hey, went gold today. They will perform Hey, Hey live right now. They stand up and starts to sing the Hey, Hey song.

As they are singing, out come The Usos. They get in the ring and tell Miz and Morrison that out of respect, they were going to let them finish. They say Pee-wee Herman has more street cred than the both of them. They are spreading good news and The Usos are spreading downer energy. At WrestleMania, John defended the titles and he won. Miz asks why the Usos are here. The Usos say they both have to defend the titles. The Usos and The New day injured The Miz and he is still not medically cleared to compete. They will see them later. They begin to walk away.

The New Day’s music hits and out come Big E and Kofi. They say they weren’t the only teams involved at WrestleMania. The original match did not go on and it only makes sense that if one member of each team got to compete at WrestleMania, the other members of each team get to compete for the tag team championships. Miz says what part of medically not cleared do they not understand. Kofi says after consulting with WWE management, Fox and others, they have been informed that next week it will be Jey Uso vs. The Miz vs. Big E in a triple threat match for the SmackDown tag team championships playa playa as they do the Teddy Long dance.

Dorado goes for the cover but Cutler breaks it up. Dorado with a kick and a chop onto Cutler but Cutler throws him to the outside. Metalik wit ha skick to the face taking him to the outside. Blake with a clothesline onto Metalik as Cutler is tagged in. Blake holds Metalik as Cutler jumps off the second rope stomping onto Metalik. He goes for the cover and gets the pin.

Brooke says she heard them say they were unbeatable. Bliss says they have to talk as her and Cross talk about it and accept their challenge.

Sasha Banks and Bayley walk down to the ring. Bayley says three weeks ago, Paige tried to ruin their WrestleMania and their friendship. Banks says but she didn’t. Bayley says anyone who thinks they can toucher her, you can’t because she has beaten everyone. But her greatest moment was when she defied all odds at WrestleMania. And how did she do that? Because she’s the best. They’re the best. They are the ultimate role models. And to all the sheep sitting at home, they have two words for them. Banks says screw you. Banks says the ignorant sheep will never understand their friendship and no one in the past, present or future can touch them.

Out comes Tamina to the ring. They say it’s great to see her again. They wanted to congratulate her on such a dominant performance at WrestleMania. Tamina tells them to shut the hell up. Tamina says Bayley did not beat her at WrestleMania. No one beat her. It took all of them to eliminate her. And miss role model, why doesn’t she be a good example and fight her one on one for the title. Banks says she is sorry but there is a pecking order around here. You don’t just step up to the champ. Banks backs up and tells Bayley to hold her back.

Bayley says she likes to be fair and she can have her match if she can beat the standard, the boss, the greatest of all time, her best friend Sasha Banks. Tamina accepts the challenge. She tells Banks that her bestie just screwed her as Tamina leaves the ring. Banks doesn’t look happy.

The bell rings and Sheamus goes after Bloom right hand. Sheamus sends him to the ropes and a spinning elbow knocks him down. Bloom on the ring apron as Sheamus grabs him and chops to the chest. Bloom rolls back into the ring as Sheamus hits him with the Brogue kick. He goes for the cover and gets the pin. 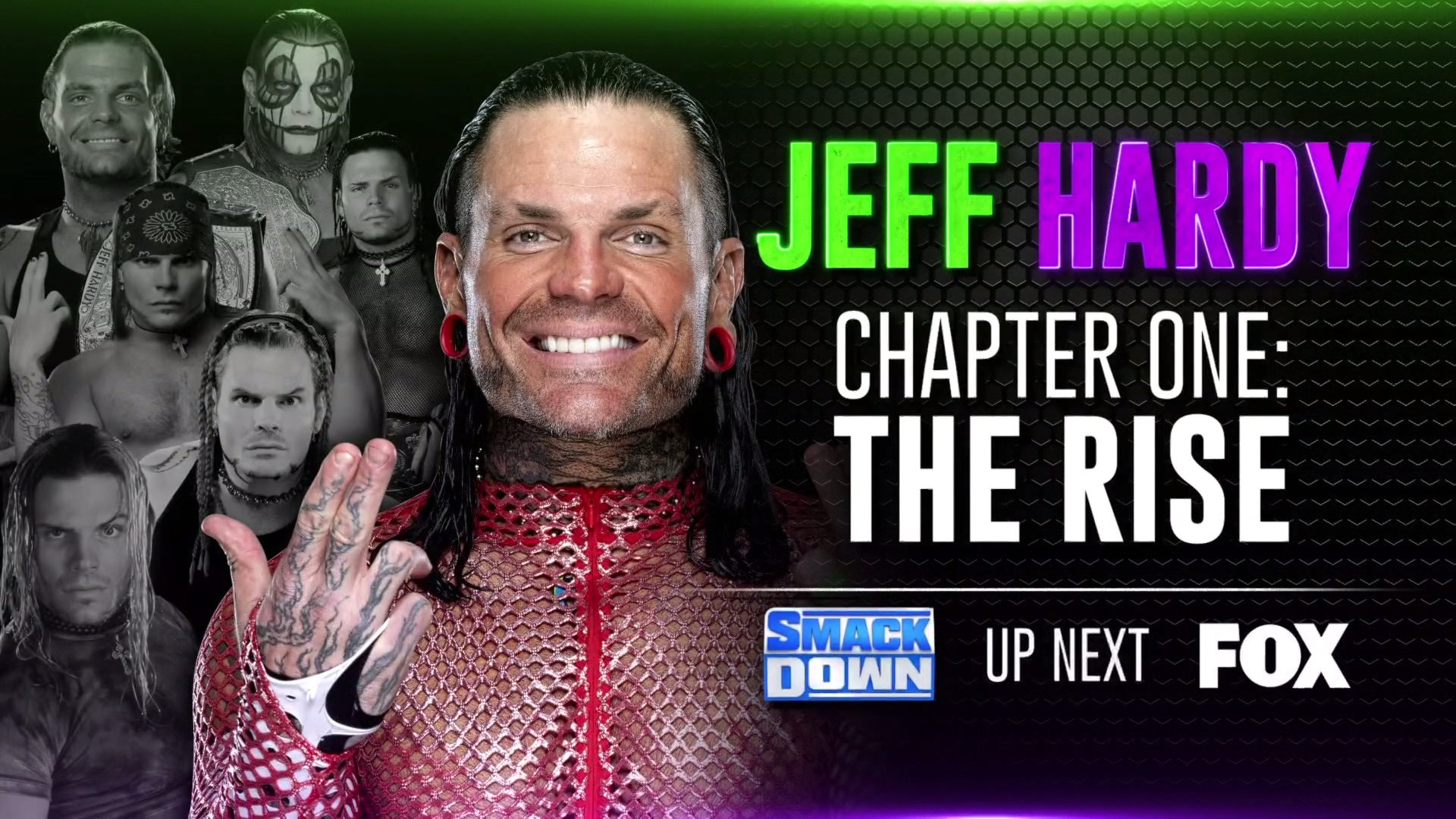 They show a clip of Jeff Hardy speaking about his start in wrestling.

The bell rings and we are under way. Nakamura with a kick to the leg followed by a punch. He goes for another kick as Strowman catches his leg and kicks Nakamura down. A headbutt by Strowman as he slams Nakamura into the turnbuckle. Strowman throws Nakamura across the ring.

Back from commercial, Strowman slams Nakamura in the ring. Strowman goes for the power slam but Nakamura gets out of it and kicks Strowman in the head. Nakamura distracts the referee as Cesaro hits Strowman from behind and Nakamura knocks him down. He goes for the cover but Strowman kicks out.

Wyatt says John was right, they really can’t see him. He congratulates Strowman and says he is so happy for him as he looks at his lantern. Wyatt says that was a long time ago, he’s sure he has learned his lesson by now as we see clips of Strowman with the Wyatt family.

Bray says he gave Strowman a home but he turned his back on him. But he thinks he can forgive him but if Strowman tells him he is sorry. Strowman says he is not playing these games. Wyatt says he has been busy talking about getting these hands instead of learning manners. Since he taught him a lot, the next lesson will be sharing. He says Strowman has something he wants back. Wyatt says as one circle closes, another begins again. Since he brought him into this world, he’s going to have to take him out. Wyatt says bye as Strowman says before he goes he wants Bray to know that anytime he wants, he is ready to let you in.