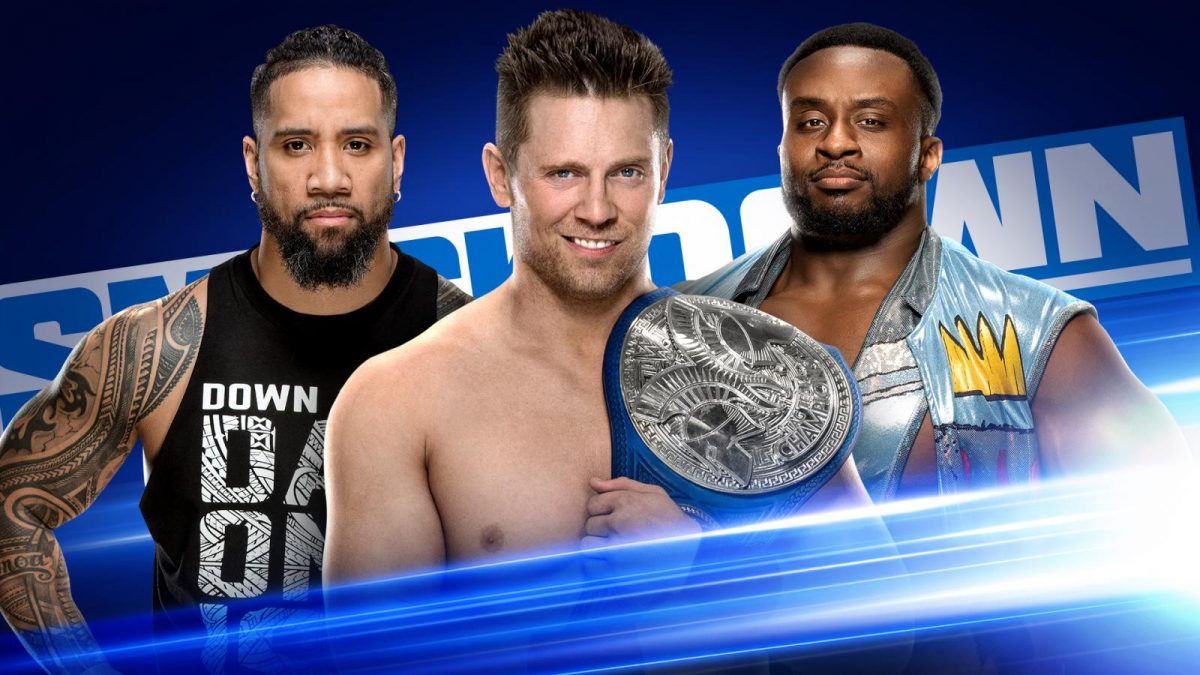 SmackDown kicks off with an image remembering the late great Howard Finkel. 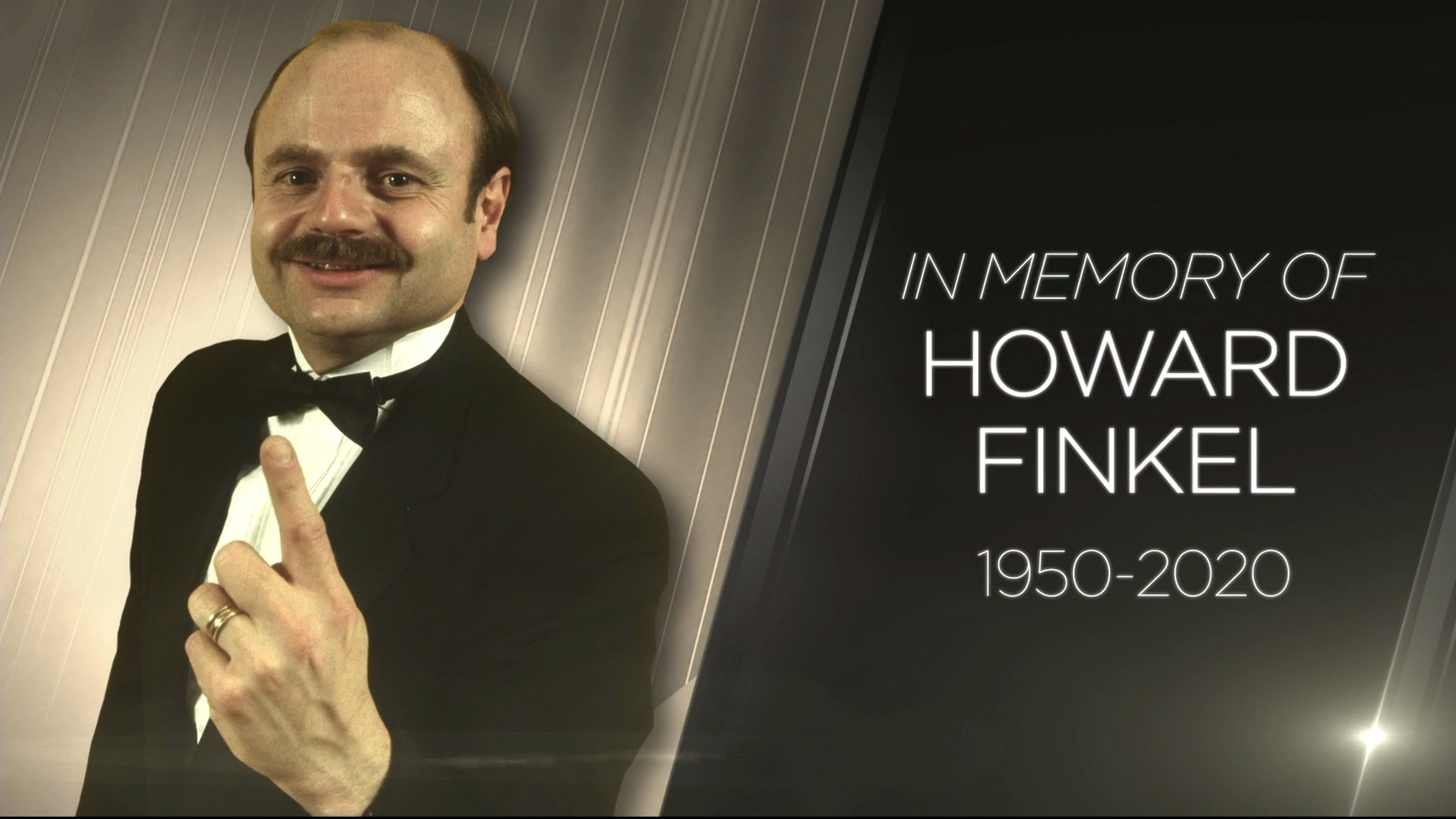 A Moment of Bliss with Braun Strowman

Live at the Performance Center, it’s Alexa Bliss and Nikki Cross starting the show. Alexa says they have a big guest tonight and by big, they mean monster. She introduces the WWE Universal champion Braun Strowman.

Out comes Strowman as she congratulates him on his win vs. Goldberg. Strowman thanks them and congratulates them on beating the Kabuki Warriors not once but twice. Cross says next week they will successfully defend their tag team titles. Bliss asks about last week what happened with Bray Wyatt. She calls Bray cunning, brutal and psychotic. We take a look at last week’s show where Wyatt challenged Braun Strowman for the championship.

Back at the Performance Center, Alexa asks him what his response is to it. Strowman says no one knows Wyatt like he does. It’s true, he used to be a part of his family but that is a part of his past he is trying to forget. Wyatt didn’t create him and he doesn’t owe him anything, especially in apology. He achieved everything on his own. He knows how Wyatt thinks and works. He calls Wyatt a manipulator. He’s not playing those games. If Wyatt wants to challenge him, be it known that if he comes for him and not the title, the only thing is he going to get are these hands.

Bliss says he bets he will. Strowman asks if that is for him as he sees a gift wrapped box in the ring. He tells Alexa she didn’t have to get him a gift. Strowman says he knows her, team little big. Strowman opens the box and it contains Strowman’s old black sheep mask he used to wear when part of the Wyatt family. Strowman looks confused as we hear Wyatt’s laugh. Strowman stands up and looks around the ring in anger.

We see a picture of Strowman wearing the mask from years ago.

Should Tamina win, she will challenge Bayley for the WWE SmackDown Women’s Championship.

The bell rings and we are under way. Banks gives Tamina a Sasha Banks shirt and says it looks right on her. Tamina says it’s a small and she wears an extra large. Sasha looks at Bayley as Tamina drops Sasha down. She lifts Sasha up but Sasha gets into a cover but Tamina kicks out.

A headbutt by Tamina knocks Sasha down. She gets Sasha on her shoulders but Sasha lands on the ring apron as Tamina elbows Sasha down to the outside.

Sasha runs towards Tamina as Tamina slams her onto the mat and Sasha rolls to the outside. Bayley tries to distract Tamina as Sasha takes advantage and slams Tamina into the ring post. She pushes Tamina into the steel steps and gets back in the ring. With the referee distracted, Bayley takes her shoe off but Lacey Evans comes running down. She takes Bayley out as Sasha goes for a baseball slide, Tamina moves out of the way and hits her with a super kick.

Tamina throws Sasha back into the ring and hits her with another super kick. She goes for the cover and gets the pin. 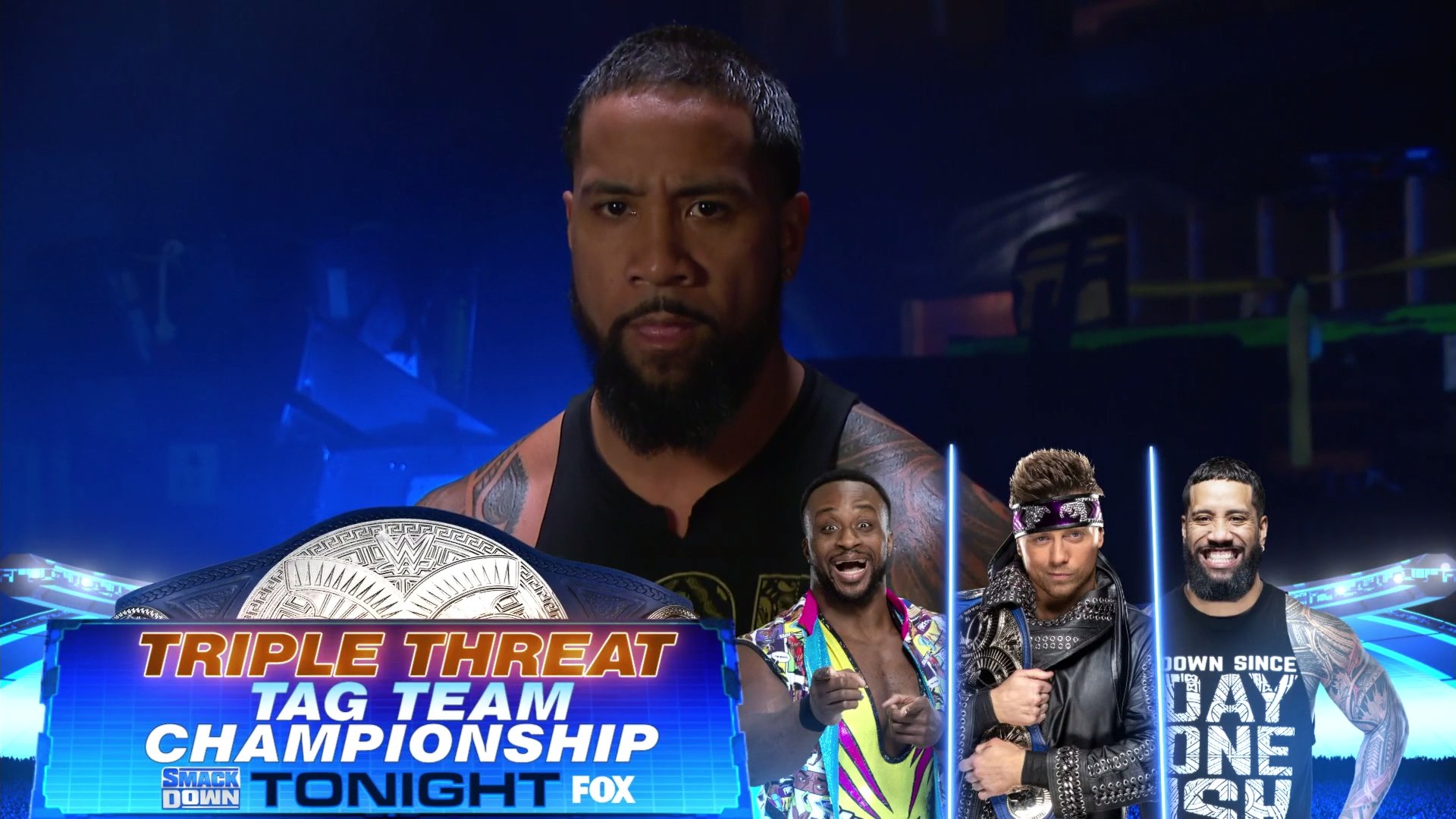 Jey Uso is backstage and cuts a promo involving his match against The Miz and Big E for the WWE SmackDown Tag Team championships.

Lacey Evans is backstage with Charly Caruso. When asked about Sasha Banks, Evans says Sasha got a taste of her own medicine. After what she did to her at WrestleMania, where Sasha goes, she goes. Not only is she a United States marine, she won’t stop until the mission is complete.

Sheamus with elbows to the back taking Denzel down. Sheamus with knees to the side of Denzel’s face. Denzel gets up as Sheamus hits him with the Brogue Kick. He goes for the cover and gets the pin.

After the match, Sheamus asks Cole if he is serious. He says last week he was the dominant superstar and before he got in the ring, Cole spoke about Jeff Hardy. And again, he is talking about Jeff Hardy. Sheamus says what about him. He says he will not be disrespected.

We see clips of Jeff Hardy: Chapter 2, the fall

Carmella says Dana Brooke should be focusing on their tag team championship match next week.

Dana says she could beat Naomi tonight in a Money in the Bank qualifier and be champion next week.

It’s mentioned that the Money in the Bank ladder ladder matches will be held at WWE headquarters.

BREAKING: WWE Superstars will climb the corporate ladder at #MITB!

The match begins on the ground floor of WWE Headquarters but the briefcases will be hanging all the way up on the roof of the corporate tower! https://t.co/iGoIUggwzo pic.twitter.com/TqawawkBXs

Money in the Bank Qualifier
Naomi vs. Dana Brooke

Naomi with a moonsault off the top rope but Brooke moves out of the way. Brooke goes for the cover and gets the pin.

Sonya DeVille comes down to the ring and grabs a microphone. She tells Mandy she has been trying to get a hold of her for two weeks and Mandy is not talking to her. She asks Mandy to come out to make things right. Sonya says she never had someone like her in her life before. From Tough Enough to NXT to WWE, Mandy even came to her sister’s wedding with her.

Out comes Mandy Rose to the ring. Mandy tells Sonya she has nothing to say to her after what she did. Sonya says for the last 5 years, she spent more time with her than her own family. And to think that Mandy doesn’t even give her time to explain herself makes her feel like it meant nothing to her. What Sonya wanted to say was that Mandy is the most selfish human being she has ever met in her entire life.

Mandy asks what is she talking about and what does it have to do with her and Otis. Sonya says it has something to do with the fact that when she got interested in a man like Otis, she was ready to kick her aside. Fire and Desire was never about them. Sonya says they used to come out to Mandy’s music. Trying to share camera time with her. She says she almost gagged but Mandy must be doing a lot of that with Otis.

Sonya says she had to keep her focus on Fire and Desire and Dolph cared about her. Look at Dolph and look at Otis. Yes, she helped Dolph, oh well. That was in exchange for him helping them as a team. It could have been them winning the tag titles at WrestleMania and Mandy ruined it. Sonya says she feels better because now all she wants to do is to see her hurt. Sonya says Mandy might be pretty but she’s nothing but a dime a dozen bottled blonde who looks like she was created in some sort of lab.

She asks if she knows what it feels like to work 5 years of her life trying to be second best to some eye candy with no talent. She tells Mandy she knows her better than anyone, like a sister, like a room mate, like a partner and she will use every ounce of her being to ruin her life. And then what will happen? Everyone will realize who the real champ of Fire and Desire, an actual fighter and not a bitch.

Out comes Dolph Ziggler. He tries to calm Mandy down. He says they went about this the wrong way. He made a huge mistake. But she can’t deny what they had or even fake it. He says he will make it up to her. He asks Mandy to look him in the eye and tell him that she doesn’t feel anything for him. Ziggler touches her as Mandy tells him not to and Sonya knocks Mandy down.

Ziggler asks her why she did that and out comes Otis. He gets in the ring and knocks Ziggler down. Sonya jumps on top of Otis but Mandy throws her down as Sonya escapes with Dolph. Ziggler gets back in the ring as Otis knocks him down. Otis lands the caterpillar on Ziggler.

Michael Cole and Corey Graves speak about Howard Finkel as they air a video tribute.

The Miz says this must be the greatest injustice in WWE history. He mentions how John Morrison already defended the titles at WrestleMania. But now he has to go out and prove why they are the greatest tag team.

We see a video about The Forgotten Sons.

Money in the Bank Qualifier
Cesaro vs. Daniel Bryan

The bell rings and we are under way. A shoulder take down by Cesaro. He walks towards Bryan but Bryan throws him to the outside. A suicide dive by Bryan as we see the man from a few weeks back in a black hoodie. We see a clip of The Usos, Alexa Bliss and Nikki Cross and a number of other tag teams. He says some friends keep their friends close and others keep their friends closer. The truth will be heard is written on the screen.

Cesaro with the sharpshooter but Bryan reaches the ropes. Bryan rolls to the outside of the ring as Cesaro runs towards him and hits him with a European uppercut.

Cesaro goes for the cover but Bryan kicks out. Cesaro gets the crossface onto Bryan but Bryan reverses it as he tries to go for the Yes lock. Cesaro gets out of it and reverses it into a cover but Bryan reverses that into a cover as Cesaro kicks out. Both men back up and Cesaro with a clothesline. Cesaro with a few European uppercuts in the corner. Cesaro sends Bryan to the corner as Bryan jumps off the second rope, Cesaro catches him and spins him around but Bryan drops him and gets him in the Yes lock.

Shinsuke Nakamura tries to break it up but Gulak drags Nakamura to the outside and Cesaro taps out.

A video plays with a cloaked “hacker” asking, “When will the truth be heard?”

Big E cuts a promo talking about how he will win the WWE SmackDown tag team championships.

Elias is walking backstage as Baron Corbin knocks him down. He slams Elias into a production truck. Right hands by Corbin as he drags Elias away.

After commercials, Corbin keeps beating up on Elias backstage. He slams Elias into production equipment. Corbin steps on the left hand of Elias as Corbin tells him to sing for him. Corbin tells Elias that he is a king and Elias will bow down to his king. Corbin grabs a guitar and slams it across the back of Elias and walks away.

The bell rings and we are under way. Miz knocks Jey down and a belly to belly onto The Miz as Miz falls to the outside. Big E goes to the outside and throws Miz into the barricade. Big E cleans out the announce desk. Big E turns around as Jey hits him with the super kick and Miz kicks Big E. Jey Uso and Miz suplex Big E through the announce table.

Back from commercial, Jey clothesline Miz to the outside and a suicide dive takes Big E out. He gets back in the ring and a suicide dive onto Miz. He throws Miz back into the ring as Jey with a cross body off the top rope but Miz kicks out. Big E gets back in the ring but Jey with a kick to the head takes Big E down. He goes after Miz as Big E takes Jey down.

The Miz gets the figure four leg lock onto Jey but Big E breaks it up. Big E hits The Miz with the Big Ending. He goes for the cover and gets the pin.