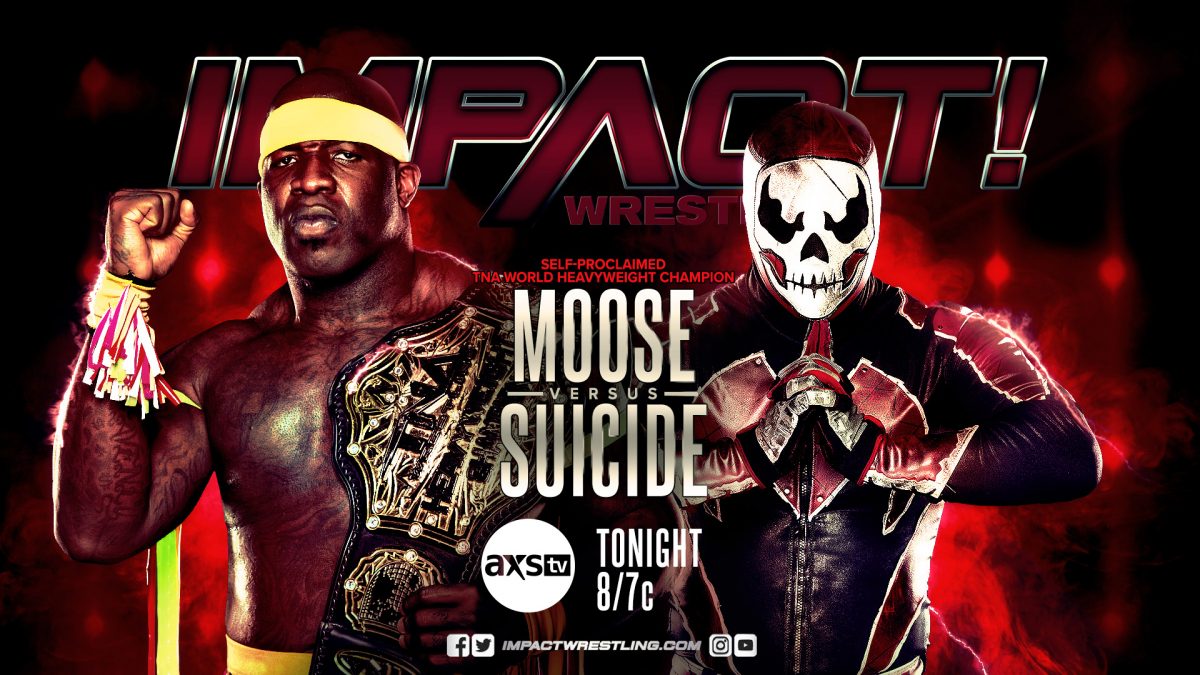 May 12, 2020
Nashville, TN
Results by ImpactWrestling.com

These two giants jockey for position in the early going. Hernandez takes him off his feet with a big shoulder tackle. Fulton hits a vertical suplex from the apron, slamming Hernandez back into the ring. Fulton follows up with a splash for two. Fulton attempts a diving headbutt off the second rope but crashes and burns when Hernandez rolls away. Hernandez connects with a modified Spinebuster but Dave Crist puts Fulton’s leg on the rope to break the count. Jake Crist gets involved. Hernandez sends him flying into Fulton with a Border Toss. Hernandez hits a top rope splash to win and advance in the tournament.

Michael Elgin says there shouldn’t be a tournament, claiming that he’s already the #1 Contender for the World Title. Elgin says that if beating people isn’t good enough, he may go back to sending them to the hospital.

Jake Crist breaks up a fight between Madman Fulton and Dave Crist. Crazzy Steve interrupts and questions whether or not oVe can succeed without their leader, Sami Callihan. Jake proposes a match next week between Crazzy Steve and Dave Crist. Joseph P. Ryan appears and tells Crazzy Steve that his name is offensive to crazy people.

Kylie builds momentum with a series of deep arm drags. Tasha drops Kylie face-first into the corner turnbuckle to turn things around. Kylie connects with the Kylie Special for two. Kylie attempts to lock in the Smile to the Finish but Tasha quickly gets to the ropes. Kylie cuts off Tasha’s momentum in mid-air, once again locking in the Smile to the Finish and forcing her to submit.

Rohit Raju says change is coming when he wins the #1 Contenders Tournament and gets his big break. Rohit reveals that there is no more Desi Hit Squad, just the Desi Hit Man.

“My mother – she calls me son because I shine like one.” @HakimZane is ready to seize the opportunity in the #1 Contenders Tournament TONIGHT. #IMPACTonAXSTV pic.twitter.com/qoBXdW94b3

Kylie Rae and Susie continue to build on their friendship when they encounter each other in the backstage area.

Kimber attempts a Hurricanrana out of the corner but Havok counters into a sit-down powerbomb. Kimber hits an Enzuigiri, then chokes Havok on the ropes to gain control. Kimber locks in an Octopus style submission on the ropes, doing some serious damage to Havok before the referee breaks it up. Nevaeh once again looks on from ringside. Kimber hits a tope rope Swanton for two. Havok connects with a vicious swinging slam for another near fall. Kimber strikes Havok with brass knuckles behind the referees back to win.

We see a video feature on the hottest flame, Kiera Hogan.

Madison Rayne and her co-host Johnny Swinger bring us the third episode of Locker Room Talk with special guest Ken Shamrock. Swinger tries to make small talk with Shamrock but the World’s Most Dangerous Man is not impressed. Shamrock intimidates him, prompting Swinger to go get him a protein shake. Shamrocks talks about putting Sami Callihan in the rear-view mirror after defeating him at Rebellion. Shamrock says he is now focused on becoming the World Champion. Michael Elgin bursts onto the set and viciously attacks Shamrock with a pipe. Elgin lays out Shamrock with a brutal Con-chair-to.

.@TheSamiCallihan plans to move into the Second Round by any means necessary against @MichaelElgin25. #IMPACTonAXSTV pic.twitter.com/swzITKzaRV

Trey hits a springboard arm drag in the early going. Rohit picks up the intensity with a strong running elbow. Rohit hits a pump-pick, then plants Trey face-first on the mat for two. Trey connects with a combination neckbreaker to start building momentum. Trey hits the Cheeky Nandos Kick, followed by a 619 in the corner. Trey launches himself off the top but Rohit counters with a knee in mid-air. Trey rolls up Rohit to win and advance in the tournament. After the match, Rohit breaks down after falling short to Trey.

Cody Deaner continues to show us how he copes with self-isolation.

.@CodyDeaner is only going *slightly* insane in isolation. #IMPACTonAXSTV pic.twitter.com/hvmYqfzufZ

The North return to the Don Kolov Arena in Canada to once again put their Tag Team Championships on the line. Josh Alexander wasn’t happy with the caliber of talent that Ethan Page handpicked for them last week so he has passed that responsibility on to George, the ring announcer. George introduces another team of undeserving opponents, The Smoes. In another unique matchup, The North make quick work of their opponents to continue their historic reign as Tag Team Champions.

John E Bravo confronts Rosemary to retrieve Mr. Mundo from her possession. Rosemary receives some advice that the mortal she may been searching for is Taya Valkyrie’s sidekick, John E Bravo himself.

Chris Bey spreads false rumors about X-Division Champion Willie Mack. He tells Johnny Swinger that Willie is saying he was the star of the Mack and Pack Connection.

.@DashingChrisBey‘s suggestion that @Willie_Mack said that he was the star of the Mack and Pack Connection has infuriated Johnny Swinger. #IMPACTonAXSTV pic.twitter.com/D6e3lC3pXd

Swinger confronts Willie about the accusations and challenges him to put the X-Division Title on the line against him next week.

Johnny Swinger is going to bring @Willie_Mack into the royal HUMBLE next week with the X-Division Championship on the line! #IMPACTonAXSTV pic.twitter.com/Ahgsr20e8j

Suicide is in control from the opening bell as Moose retreats to the outside in order to catch a breathe. Moose turns the tide and hits a big boot, sending him crashing into the steel guardrail. Moose powerbombs Suicide on the apron. Moose plays to the camera, allowing Suicide to regain momentum and connect with a dive to the floor. Suicide counters a pop-up powerbomb into a Hurricanrana. Suicide flies through the air with a Lionsault for two. Moose charges into the corner but Suicide avoids him, causing Moose to trample the referee. Suicide has Moose beat with the Codebreaker but there’s no referee to make the count. Moose hits a low blow, followed by the No Jackhammer Needed Spear to win. Moose celebrates with the TNA World Heavyweight Title as IMPACT! goes off the air.