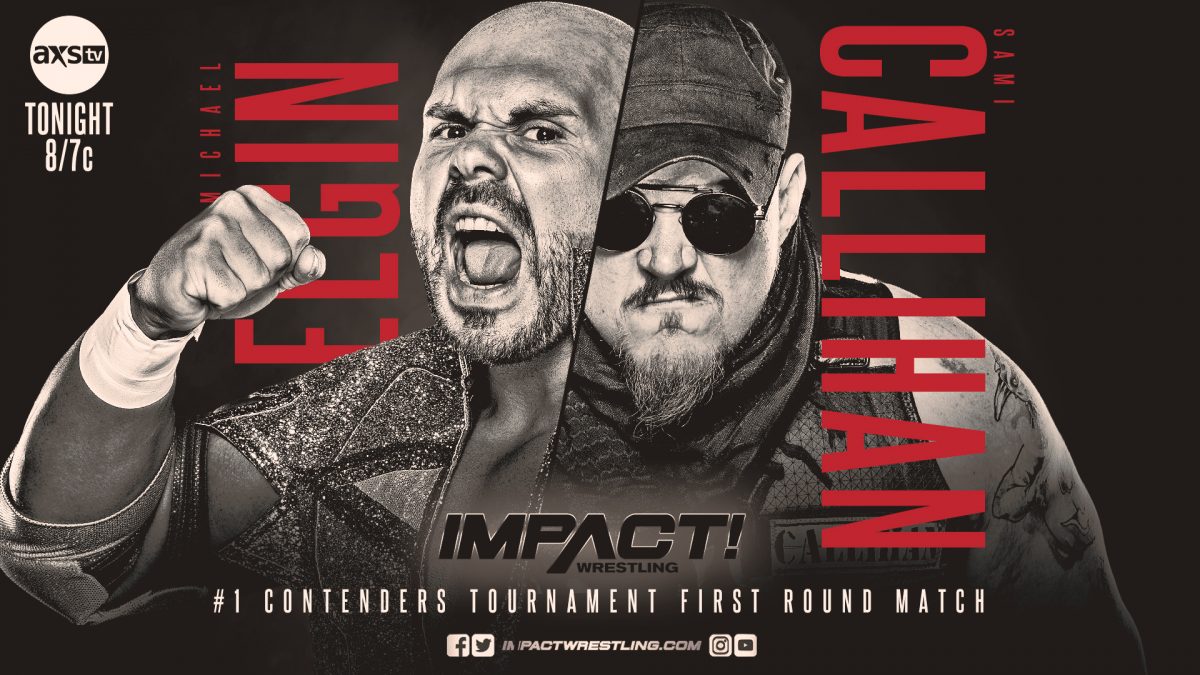 May 19, 2020
Nashville, TN
Results by ImpactWrestling.com

Rhino holds the ring as Ace retreats to the outside for a breather. Rhino sets up for the Gore but Ace dives to the floor to avoid it. Rhino follows him outside this time and connects with a vertical suplex. Ace drives Rhino into the steel ring post to gain control. Rhino barely makes it back in the ring before the referee completes his ten count. Ace hits a springboard kick for two. Both men are down after a double clothesline. Rhino hits the mini-Gore to build momentum but Ace quickly shuts him down. Rhino connects with a Superplex for a near fall. Rhino swings at Ace with a steel chair but the referee stops him from using it. Ace hits Rhino with his signature baton while the referee has his back turned, followed by The Fold to win.

Josh Mathews asks Moose when his so-called “reign” with the TNA World Heavyweight Championship is going to end. Moose says it’s going to end when someone beats him for it. Josh insists that it’s not a sanctioned Championship and they’re not actual Championship matches he’s competing in. After Josh brings up his cheating ways to defeat Suicide last week, Moose grants the masked warrior a rematch later tonight.

Kiera Hogan offers to take new IMPACT Knockout Tasha Steelz under her wing, like she wishes someone had done for her when she debuted.

Steve is on fire in the early going, hitting Dave with a quick flurry of attacks. Steve connects with a slingshot crossbody to the outside. Joseph P. Ryan watches on and takes notes on his iPad from the ramp. Dave turns the tide with a big clothesline. Dave wears down Steve with a series of submissions. Steve launches himself off the top and hits a flying DDT to win.

After the match, Madman Fulton is furious at oVe’s recent string of losses and shockingly quits the group.

Rosemary takes Mr. Mundo into her possession again in order to lure John E Bravo to her.

Fallah uses TJP as a backpack as they both crash into Larry on the mat. TJP launches himself off Fallah’s back, delivering a flying elbow to Larry. TJP hits the ropes but Acey clobbers him with a huge clothesline. Larry connects with a spinebuster on TJP for two. TJP hits Larry with a DDT to create distance, allowing him to tag in Fallah. Acey gets sent to the floor with a flying shoulder tackle. Acey comes back at Fallah with a Pounce. Fallah hits Larry with a belly-to-belly suplex for a near fall. Fallah hits Larry with a Samoan Drop, followed by the Mamba Splash from TJP to win.

Moose catches Suicide in mid-air. Suicide turns it around and sends Moose into the steel ring post. Suicide hits a Hurricanrana out of the corner, then begins to wear down Moose with an Octopus style submission. Moose catches Suicide once again and this time, swings him into the steel guardrails. Moose utilizes his strength advantage with a series of strong Irish whips into the corner turnbuckles. Suicide finally begins to build some momentum with a clothesline. Suicide somehow gets Moose up on his shoulders, slams him to the mat and follows up with a springboard Moonsault for two. Moose is about to resort to breaking the rules but Suicide stops him. Suicide attempts a Swanton off the top but Moose rolls him up with a hold of the tights to win.

Michael Elgin claims that when he becomes World Champion, the fans will learn to love him.

“I remember a time when Muhammad Ali said he would be the greatest boxing heavyweight champion and you hated it.

I remember a time when Conor McGregor said he was going to be the best fighter that there ever was and you hated it.

Backstage, Chris Bey tells Johnny Swinger that even if he doesn’t win the X-Division Championship from Willie Mack, he can still “win” the match.

Swinger is in control from the opening bell. Willie ducks a clothesline, then hits a powerslam and running leg drop. Swinger hits the Swinging Neckbreaker but Willie gets his foot on the bottom rope to break the count. Swinger thinks he’s won the match and celebrates with the X-Division Championship. Willie connects with a Samoan Drop, followed by the standing Moonsault to win.

After the match, Swinger hits Willie from behind. Chris Bey comes out and joins in on the attack. Swinger and Bey stand tall as Willie is laid out in the middle of the ring.

Cody Deaner confronts the reigning Tag Team Champions, The North, up in Canada. After Ethan Page brags about there being no competition, Deaner proposes a match – him and Wheels vs The North next week at the Deaner Compound with the Tag Titles on the line. The North accept but after they leave, Deaner reveals that Wheels is not Cam the referee.

.@OfficialEGO and @Walking_Weapon haven’t exactly had the highest caliber competition lately but that’s about to change with @CodyDeaner NEXT WEEK! #IMPACTonAXSTV pic.twitter.com/pH5uIBH1lN

Callihan’s ankle is in obvious discomfort after he refused to tap out to Ken Shamrock’s ankle lock just a few weeks ago. Callihan pump-kicks Elgin to the floor, then sends him into the steel guardrails. Elgin targets Callihan’s ankle as he drives it into the guardrail. Callihan pulls Elgin into the ring post but Elgin quickly re-targets the ankle. Callihan connects with a big clothesline as both men are laid out. Callihan hits a dive to the floor. Elgin connects with a clothesline to the back of Callihan, then locks in the single-leg Boston Crab. Callihan almost passes out but regains consciousness before the referee can call for the bell. Callihan has a second wind as he hits a back suplex. Elgin puts Callihan away with the sit-down Powerbomb to advance in the tournament. 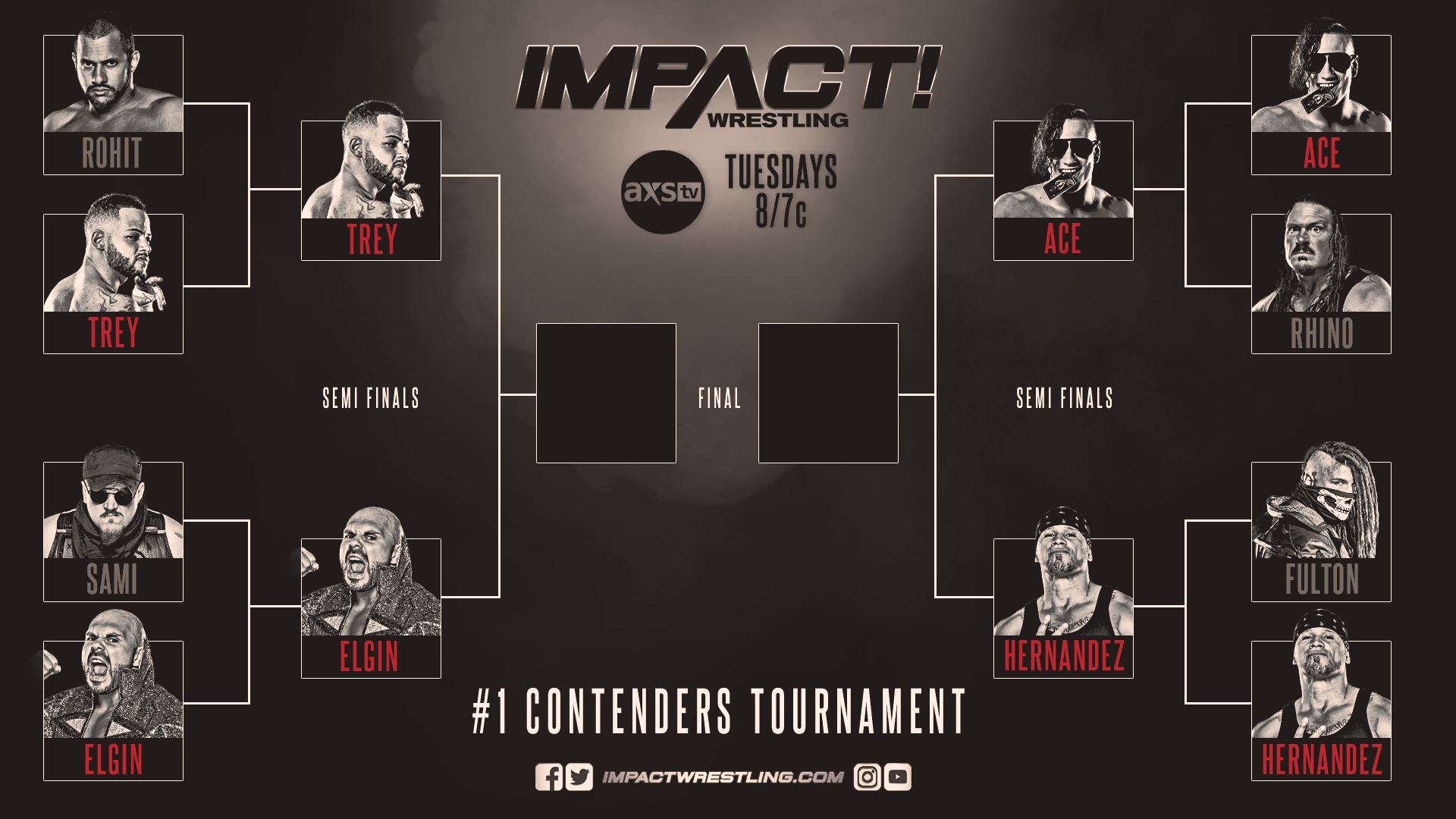