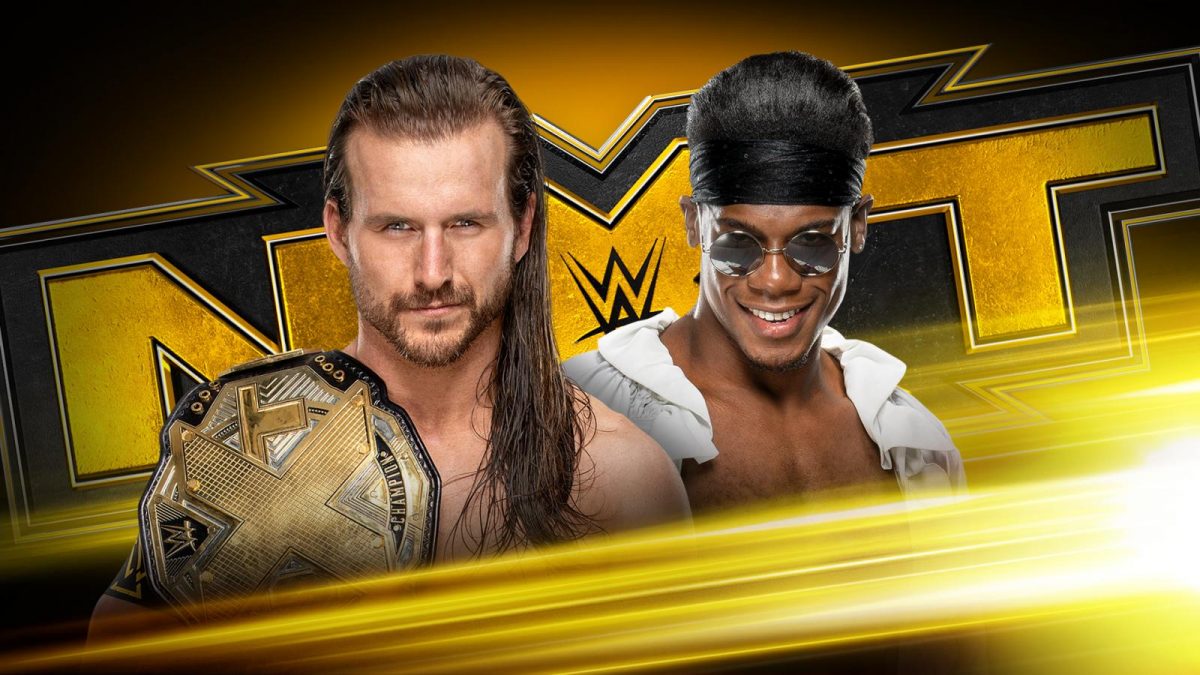 We come back from the break to see Gargano applying a chin lock to Dijakovic. Gargano punches away at him, but Dijakovic comes back with a big boot and pair of right hands. Dijakovic forearms him in the face, but Gargano blocks a kick and kicks the leg. Gargano hits the ropes, but Dijakovic hits a cyclone big boot for a near fall.

Candice LeRae grabs Gargano’s hands to pull him out of the ring, but Dijakovic drags him away. Dijakovic catches Gargano attempting a blindside and lifts him up for another toss, but Gargano counters with a roll-up for a two count. Dijakovic quickly cuts him off and goes for Feast Your Eyes, but Gargano gets out and clips the leg. Gargano superkicks him for a near fall. LeRae gets on the apron to distract the referee, so Gargano pulls the top turnbuckle pad off. The referee catches him before it totally comes off. Dijakovic then hits a sit-out chokeslam on Gargano for a near fall. Dijakovic goes to the top rope, but Gargano grabs the leg. Gargano attacks the knee and goes for a sunset flip powerbomb, but Dijakovic flips through, stunning Gargano. Dijakovic superkicks him for a near fall.

Fabian Aichner and Marcel Barthel say they are destined to reign and issue a challenge for the NXT Tag Team Championship.

Akira Tozawa is asked about being the frontrunner in the tournament. Tozawa says El Hijo del Fantasma is his next challenge. He’s never faced him and doesn’t know him, but he will beat him.

Robert Stone introduces Chelsea Green as the complete package. Green throws her entrance costume at Li and attacks. Li avoids a strike and elbows her before hitting an arm drag. Green forearms out and hits the ropes, but Li clotheslines her before connecting with two kicks. Aliyah walks down to ringside and grabs Li’s leg. Li takes Green down, but stops to kick Aliyah off the apron. Green hits the I’m Prettier for the win.

After the match, Robert Stone helps Aliyah up. She runs off. Stone and Green celebrate on the ramp.

Velveteen Dream is shown backstage. The time has finally come for Adam Cole. The minutes… the seconds… they have reached their moment for the NXT Championship. It is not a dream. It’s more than that. It’s Dream Over.

Kross is accompanied by Scarlett (Bordeaux). Kross immediately spikes him on his head with a Doomsday Saito Suplex! Kross hits another one before applying the Kross Jacket for the submission.

NXT Tag Team Champions Matt Riddle and Timothy Thatcher are interviewed about Imperium’s challenge. Riddle says he’s game for the match, but it’s up to Tim. Thatcher says Riddle will knock him out while he’ll tap them out.

They lock up, and Flair applies a side headlock. Shirai whips her off, but Flair shoulder blocks her down. Flair hits the ropes and goes for a stomp, but Shirai moves. Shirai then does a matrix counter to a clothesline before kicking Flair back. Shirai taunts her, so Flair puts herself through the ropes to keep Shirai back. Flair kicks her in the midsection before hitting a snapmare. Flair applies a head-scissor before driving her head into the mat. Flair rolls to slam Shirai and cinches in the head-scissor submission. Flair kips up and drives her into the corner. Flair chops the chest and counters a sunset flip with a punch. Flair pulls her up, but Shirai forearms her back. Shirai stands on her in the corner before going for a slingshot dropkick, but Flair boots her back before hitting a clothesline.

We come back from the break to see Flair send her to the corner. Shirai avoids an avalanche and hits a kick to the head. Shirai then connects with a springboard dropkick. Shirai charges, but Flair connects with a back elbow to take her down. Flair goes to the second rope, but Shirai comes back with a kick. Shirai then hits a Frankensteiner for a near fall.

Flair gets up and connects with a backbreaker to take Shirai down. Flair goes to the top rope, but Shirai avoids the moonsault. Shirai takes her down into the ropes and hits a 619. Shirai hits running double knees in the corner for a near fall. Shirai goes to the top rope for a moonsault, but Flair gets the knees up. Flair immediately follows up with a big boot for a near fall. Flair goes for a powerbomb, but Shirai counters with a hurricanrana into the corner. Flair rolls out of the ring to recover. Shirai goes for a top rope moonsault to the floor, but Flair moves! Flair then hits her in the back with a kendo stick!

Flair attacks the leg and slams it off the ring post. Flair goes to put her in a Figure Four around the ring post, but Rhea Ripley returns for the first time since WrestleMania 36. Ripley attacks Flair and puts her in the ring, but Flair gets out and runs off. Ripley shouts for Flair to come back. Shirai is not happy.

Rhea Ripley is interviewed, but Io Shirai quickly interrupts. They brawl before referees break it up.

Kushida quickly jumps on him and goes for a test of strength. Kushida wrenches the arm, but Atlas gets out. Atlas quickly hits a nice arm drag and shoulder blocks him down. They crisscross in the ropes before Atlas does a handstand. Kushida kicks him in the arm and knocks him out of the ring. Kushida then goes to the top rope and hits a wild senton bomb to the floor!

Finn Bálor walks out onto the stage. Bálor says he used to think the biggest snakes in this place were in the office, but he’s not so sure anymore. Rule number one of wrestling is to attack they guy and get the big push. Music, lights, smoke, lasers… but then the bell rings. Now you’re in the ring with the Prince and there is nowhere to hide. Bálor is a patient man, but to whoever attacked him… the push they’re expecting won’t be a push. It’ll be a squash.

Matt Riddle and Timothy Thatcher will defend the NXT Tag Team Championship against Marcel Barthel and Fabian Aichner next week.

Grimes immediately goes for the Cave In, but DeJournette moves. DeJournette hits a pair of belly-to-belly overhead suplexes and waits for Grimes to get up. Grimes quickly stuns him with a Cave In for the win. 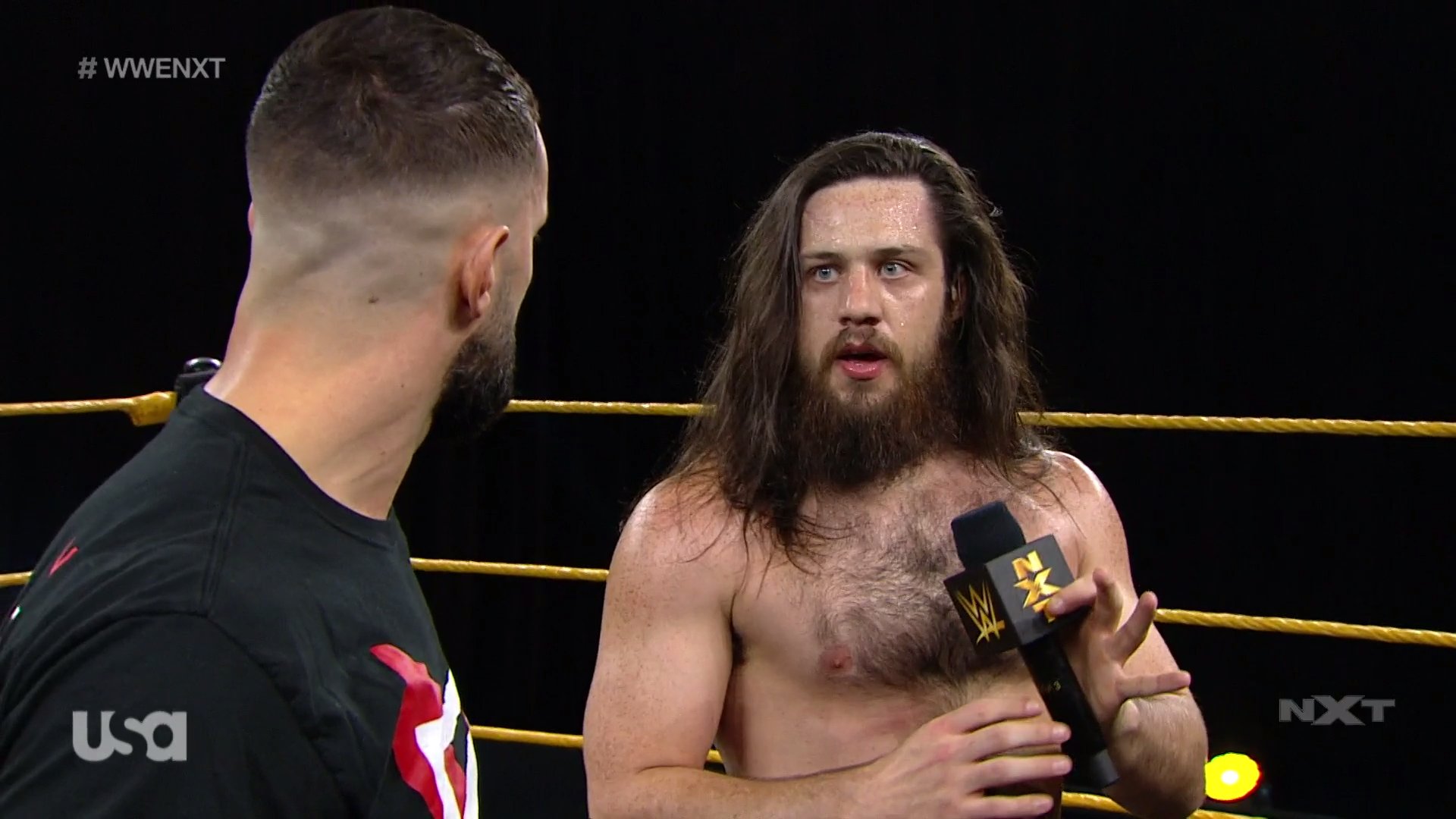 Cameron Grimes grabs a microphone. Time’s are a’changing around here. Grimes deserves better than this. Finn Bálor was out here and says if you want to be at the top, you have to come after him. Someone beat him to it. If Grimes came at Bálor, he’d stare at him in the face. Finn Bálor quietly walks down to the ring and gets in. Grimes doesn’t see him. Grimes says he would slap the taste out of his mouth. Grimes becomes worried when he sees Bálor. Grimes tries to shy away, but Bálor challenges him to slap him in the face.

Bálor quickly takes him down and hits a double foot stomp. Bálor follows up with a Sling Blade and sends Grimes running. There’s a snake in the back, but he’ll find him. The best way to kill a snake is to chop off its head.

Finn Bálor will take on Cameron Grimes next week on NXT.

Cole stays away from Dream before powering him into the corner. Dream takes him down and knocks him out of the ring. Dream sends him into the ring steps and puts him in the ring. Cole quickly hits a pair of kick and tries for the Last Shot, but Dream counters with a spinebuster for a near fall. Dream punches him in the corner until the referee wans him. Dream puts Cole on the top rope and climbs to the second rope before lifting him. Cole fights off, but Dream snaps him off the top rope. Cole quickly rakes the eyes and tries for a Panama Sunrise, but Dream counters into Reverse STO/DDT combo for a near fall.

We come back from the break to see Dream fight up from a chin lock and do the 10 punches in the corner. Cole gets out and clips the leg. Cole shouts that Dream is a fraud and a joke. Dream boots him back and hits a pair of clotheslines before connecting with a back elbow. Dream punches away at Cole before the referee backs him up. Dream hits a springboard clothesline for a near fall. Dream goes for a Dream Valley Driver, but Cole gets out. Dream superkicks him for a near fall.

Dream goes to the top rope and jumps, but he lands on his feet when Cole moves. Cole boots Dream and hits a backstabber for a near fall. Dream fights out of a fireman’s carry and clubs him. Cole connects with an enzuigiri followed by an ushigoroshi. Cole covers for a near fall. Both men are down and all you hear is huffing and puffing. Cole says Dream is a nobody. They trade punches from their knees before Cole drops him on the apron and punches him down to the floor. Dream quickly takes Cole down and goes to the top rope. Dream leaps, but Cole superkicks him out of mid-air! Dream falls on top of him for a near fall.

Roderick Strong and Bobby Fish walk down, but Dexter Lumis slides out from under the ring to stop them. Lumis attacks Strong and Fish before the referee is taken out. In the ring, Dream hits a Purple RainMaker, but the referee is down. Dream goes to the top rope and wipes out Strong and Fish with a plancha. Dream gets in the ring, but Cole superkicks him and connects with the Last Shot for the win.