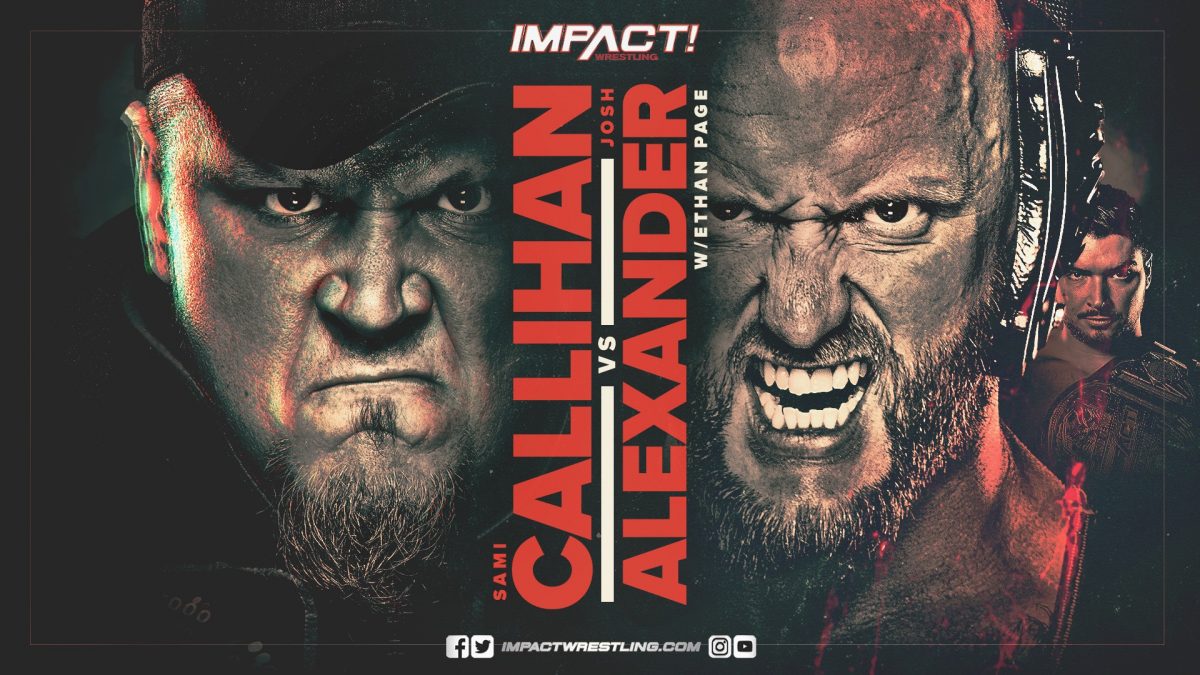 Rosemary berates Susie for helping her get her powers back and says Susie is acting like an “idiotic, little child”. The fight is on as Susie launches Rosemary out of the corner. Kylie offers her hand to Taya as a sign of friendly competition but the former longest-reigning Knockouts Champion wants no part of that. Rosemary knees the back of Susie from the apron, allowing Taya to take control with a clothesline. Rosemary locks in the Upside Down on Susie, followed by strong running knees from Wera Loca. Taya hits Kylie with a Spear, then a Northern Lights suplex for two. Rosemary gets sent to the floor and Bravo is concerned she’s injured. Kylie locks in Smile to the Finish off the distraction and forces Taya to tap.

Chris Bey is angry at Johnny Swinger for getting himself banned from ringside for Bey’s X-Division Title Match against Willie Mack at Slammiversary. Swinger assures Bey that he has a plan.

Swinger seems like a man with a plan tonight. #IMPACTonAXSTV pic.twitter.com/xBEkUsU3nh

Chaos erupts from the opening bell as all four teams battle it out at the same time. Jake launches himself over the top rope, taking out everyone on the floor. Cody connects with a strong neckbreaker on Acey. The match begins to break down again as everyone gets involved. It culminates with Acey taking out Luster with a huge running crossbody. Reno Scum continue to wear down Cody on their side of the ring. TJP and Fallah brawl to the back with Reno Scum. The Deaners and XXXL are the remaining teams in the ring as Jake puts Larry away with a swinging slam.

After the match, the brawl between TJP, Fallah and Reno Scum continues in the backstage area. TJP launches himself off a lift, crashing into Reno Scum with a crossbody. Reno Scum turns the tide and buries TJP under a pile of steel guardrails.

Johnny Swinger searches for a disguise so that he can secretly accompany Chris Bey to ringside at Slammiversary. After turning down Super Eric’s costume, he decides to take Suicide’s mask from the locker room.

What does Johnny Swinger plan to do with Suicide?! #IMPACTonAXSTV pic.twitter.com/8mtHr7jBqt

Ken Shamrock is in search of Sami Callihan. He offers his help in Callihan’s match against Josh Alexander tonight. Callihan tells Shamrock he thinks they could be the most dangerous tag team before disappearing.

The World’s Most Dangerous Tag Team has a nice ring to it, doesn’t it? #IMPACTonAXSTV @ShamrockKen @TheSamiCallihan pic.twitter.com/f4hkGNIY0d

Jordynne goes for the Grace Driver in the early going but Lee bites her finger to fight it off. This angers Grace as she hits a strong Spinebuster for two. Lee connects with an Enzuigiri, then chokes Grace on the bottom rope to gain control. Lee delivers a stiff forearm but Grace comes right back with a Michinoku Driver. Lee soars through the air with a top rope Swanton for a near fall. Lee attempts to use the brass knuckles but Grace blocks and hits the Grace Driver to win.

After the match, Deonna Purrazzo’s music hits but she appears on the screen instead of in-person. The Virtuosa says she didn’t come to IMPACT Wrestling to engage in frivolous combat – she came to be the Knockouts Champion.

On July 18th at Slammiversary, a new World Champion will be crowned. Will it be Eddie Edwards, Ace Austin, Trey or the mystery opponent who leaves with the World Title around their waist? Eddie, Ace and Trey preview the huge bout in a series of sit-down interviews.

Madison Rayne hosts the latest edition of Locker Room Talk without her usual co-host, Johnny Swinger. Madison introduces her guest, the most iconic Knockout in IMPACT Wrestling history – herself. Madison announces that she will be stepping back into the ring at Slammiversary to compete in the #1 Contender Knockouts Gauntlet. Kiera Hogan and Tasha Steelz interrupt and catch Madison talking to herself. Havok and Nevaeh are next on the scene, telling Kiera and Tasha that their luck has run out. A brawl breaks out between the two teams – and unfortunately, that’s all the time we have for this edition of Locker Room Talk.

.@MadisonRayne welcomes one of the most iconic Knockouts of all-time to Locker Room Talk….HERSELF!

Hernandez continues to make money dominating the locker room in arm wrestling contests. But his next opponent may not be so easy as Rhino sits down at the table.

After stealing Suicide’s attire so that he could accompany Chris Bey to ringside at Slammiversary, Swinger now finds himself in Suicide’s scheduled match against Willie Mack for the X Division Championship. Swinger has a tough time emulating the offensive style of Suicide and it costs him. Willie makes quick work of “Swinger-cide” with the Stunner.

Backstage, Gia Miller interviews Tommy Dreamer. He has requested this time to read his written apology to Moose after his strong message to the self-proclaimed TNA World Heavyweight Champion last week. Moose interrupts and claims his apology was not sincere. Dreamer informs Moose that after talking to the TNA Championship committee, he will challenge for the TNA World Heavyweight Championship in an Old School Rules match at Slammiversary.

.@THETOMMYDREAMER went to the TNA Championship Committee and the TNA Director of Authority and he’s going to face @TheMooseNation for the TNA World Heavyweight Championship at #Slammiversary! #IMPACTonAXSTV pic.twitter.com/iEuVjsFs5p

Alexander gets sent into the steel guardrail and Callihan follows up with a running boot. Callihan continues the assault with a Death Valley Driver on the floor. Page distracts Callihan, allowing Alexander to take control with a suplex on the apron. Callihan connects with a modified Brainbuster for two. Alexander sends Callihan for a ride with his signature spinning slam. Alexander locks in the Ankle Lock, sending a message to Ken Shamrock. Callihan fights back with a sick Piledriver on the apron but somehow, Alexander kicks out. Page charges at Callihan but inadvertently takes out the referee. Shamrock makes the save, locking in the Ankle Lock on Page. Callihan connects with another Piledriver on Alexander to win.

Post-match, Callihan and Shamrock stare each other down in the middle of the ring as The North retreat up the ramp.

On July 18th at Slammiversary, a former World Champion will return and he will not be alone.