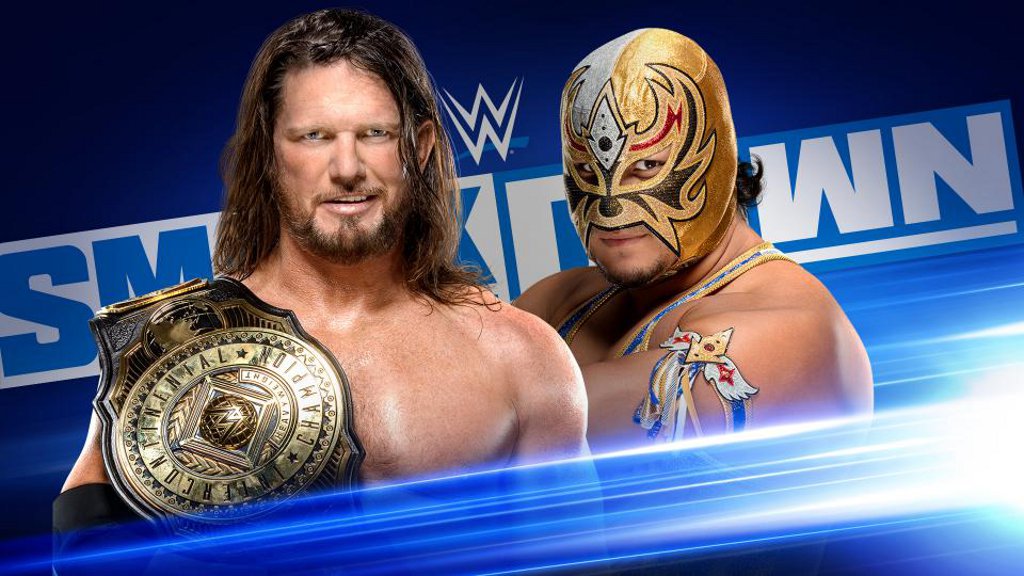 After that is Alexa Bliss and Nikki Cross where Cross talks about how last week she defeated Bliss, who is better than both Banks and Bayley.

Big E cuts a promo saying Woods and Kofi may not be there tonight but they will be on his mind and in his heart. He talks about how he will beat The Miz tonight.

Miz is with Morrison and they laugh talking about Big E’s singles career.

Lacey Evans says tonight she will give Naomi #WhatSheDeserves.

Naomi says what she deserves is to beat Lacey Evans.

Gran Metalik is talking in Spanish and says that tonight he will be the Intercontinental champion.

AJ says he will face Gran Metalik and his ability is impressive. But impressive doesn’t compare to phenomenal.

Bray Wyatt is in his house and he says he was our searching for Strowman. But Strowman is probably still in the dirty swamp. Unless those nasty gators got him first. But his heart and soul will be trapped there forever. He says he never wanted to hurt Braun Strowman, he only wanted to help him. But now, he is awake and he wants something that Braun has. And until he gets what he wants, no one is safe as we see flashes of The Fiend on screen. He says let me in and bye!

The bell rings and we are under way. A kick by AJ as he starts to beat up on Metalik. He slams Metalik face first into the top turnbuckle. AJ gets Metalik in the corner and chops to the chest followed by a back breaker. AJ with a vertical suplex as he goes for the cover but Metalik kicks out.

Metalk jumps off the second rope and lands a drop kick. He goes for the cover but again AJ kicks out. He lifts AJ up but his knee gives up and AJ turns it around and lands a clothesline taking Metalik out. AJ gets onto the ring apron as he goes for the Phenomenal Forearm but Metalik ducks and hits him with an inzighuri. Metalik runs onto the second rope and jumps but AJ blocks it and hits Metalik in mid air. AJ gets Metalik in the calf crusher as Metalik taps out.

Winner: AJ Styles via Submission to retain the Intercontinental Championship.

Dorado gets in the ring after the match as AJ attacks him and hits him with the Styles Clash.

Corbin asks Shorty G if it hurts watching AJ Styles. Gable asks if they are friends now as Corbin says they have always been friends and Gable is a former Olympian but he gets ignored. And barefoot idiots get hyped and opportunities meant for Shorty G. Gable tells Corbin he want shim to take Riddle for him and that’s what this is all about. Corbin says the ransom is out there for anyone who wants to take Riddle out.

Jeff Hardy makes his way down to the ring and says he hasn’t felt this good in a long time. The last few months with Sheamus were tough, he was a constant reminder of how dangerous his demons could be. He just has to remind himself of how bad it could be because sobriety is a never ending challenge he has to face every day but beating Sheamus was a reminder that he is on the right path. He’s an alcoholic but he’s a loving husband, father and a WWE superstar. Hardy says he is grateful to be alive and well on SmackDown.

Baron Corbin’s music hits and he says enough. If he has to stand around and continue to listen to Jeff talk, he thinks his head will explode. He asks what is going on on SmackDown. He says Jeff is the charismatic enigma who is known to take things to the extreme but now he is complaining about recovery. He says Jeff’s life sucks but to shut up and deal with it. Corbin says he has to deal with Matt Riddle, tonight he has a match against Drew Gulak, he feels like he is losing his mind. He feels like his kingdom SmackDown is turning into an insane asylum.

Hardy says if everyone around Corbin is the problem, maybe the real problem is Corbin. Baron says he is pretty disappointed in Hardy. He would think a guy like Jeff would want to stay in his good gracious. He would have offered Jeff the king’s ransom to take out Riddle but he probably wouldn’t take it. Out comes Gulak who attacks Corbin.

Gulak with chops to the chest but Corbin with a big right hand. He goes for the cover but Gulak kicks out. Corbin working on Gulak’s shoulders as he gets an arm bar head lock onto Gulak in the middle of the ring. Gulak gets to his feet and fights out of it but Corbin with a big slam takes Gulak down and a half crab by Corbin in the middle of the ring. Gulak reverses it as he grabs Corbin’s arm and gets a cross face onto Corbin but Corbin reaches the ropes.

In comes Matt Riddle who attacks Corbin after the match. Shorty G comes out and hits Riddle with a German suplex. Shorty G stands with Corbin as both men leave the ring.

Big E vs. The Miz

The bell rings and we are under way. Miz with a waist lock but Big E overpowers him and flips Miz down. Both men back up and right hands by Miz as he runs to the ropes but Big E with the leap frog and the abdominal stretch on the Miz in the middle of the ring. He sends Miz to the ropes and a back elbow takes Miz down. He goes for the cover but Miz kicks out.

Miz gets Big E in the corner as he works on his leg and a running knee by Miz. Another running knee, he goes for a third but Big E slams Miz down onto the mat. he goes for the cover but Mi kicks out. Miz is on the ring apron, Big E goes for the spear but Miz hits him with a knee to the face. With the referee distracted, Morrison gets on the ring apron and kicks Big E. Miz with the Skull Crushing Finale. He goes for the cover but Big E kicks out. Miz turns it right into the figure four as Big E reaches the ropes.

Both men down as Miz goes after Big E’s left leg. He distracts the ref, Morrison goes for a kick to the face but the referee sees Morrison and throws him out of the match. Morrison pleads his innocence saying he didn’t do anything. Big E goes for a roll up but Miz kicks out. Big E with the stretch muffler submission and the Miz taps.

Cesaro and Shinsuke Nakamura are backstage celebrating being champions. In come the Lucha House Party and Cesaro says it’s not good to see them. Nakamura asks if they like to party as Cesaro tells Nakamura it’s a champions only party. Nakamura and Cesaro tell them they aren’t champion as Cesaro makes fun of Metalik for not winning the Intercontinental championship match earlier.

Sheamus says in retrospect, he shouldn’t have agreed to fight Jeff Hardy in a bar. He fought him in his natural environment, he gave him home field advantage. He smashes beer bottles onto Jeff’s head but Jeff kept getting stronger. Sheamus says he is not making excuses, what’s done is done. He doesn’t have to worry about pushing Jeff to the bottle, it’s only a matter of time. Just six back, relax and let nature take its course. He says that’s bad news for the SmackDown locker room because now he is their problem.

Lacey Evans says she beat Naomi last time, she beat her at karaoke and yet people want to start a Naomi deserves better hashtag. If they want to feel sorry for her so bad, she’ll make them really feel bad for Naomi tonight.

The bell rings and we are under way. Naomi runs towards Lacey but Lacey catches her and a power bomb by Evans. Lacey with a head lock as she slams Naomi face first onto the mat. Lacey grabs Naomi and wraps her around the ring post. Naomi drops to the outside as Lacey throws her face first into the ring post. Lacey slams her face first into the ring apron. She places Naomi’s hair in between the steel steps as Lacey gets in the ring an the referee starts to count to ten.

Naomi gets in the ring and a modified sunset flip onto the outside by Naomi. She gets Lacey back in the ring, goes for the cover but Lacey kicks out. Lacey throws Naomi into the corner, she goes for the Women’s Rights but Naomi reverses it into the back slide cover and gets the pin.

Mandy Rose is backstage with Otis and she says it has been a while since they had a proper date. She says she booked them a reservation at his favorite BBQ spot. Otis is excited and says they will have ribs, steaks and dessert. Mandy says she wanted to surprise him with a peach dessert and Otis gets even more excited. She tells him to go get ready, she will get ready and to meet back.

Sonya Deville walks in from behind looking at Mandy who walked away.

Mandy Rose is backstage getting ready and in comes Sonya who attacks her from behind. She beats her up slamming her on the table. She asks Mandy if she’s worried about being ugly and asks her what she has now? Sonya grabs a pair of scissors and cuts some of it off. She tells Mandy that Mandy ruined her life and she said she was going to ruin hers. Sonya grabs a pair of clippers and turns it on but in come WWE officials who break it off and tell her to leave.

Kayla Braxton is backstage and Otis and Tucker are backstage checking on Mandy. Miz and Morrison come in and they say that Mandy looks like a soccer mom. Morrison says this is a hairy situation as WWE officials were there to shave the day. The internet will be buzzing about that clip. Tucker tells them to get out of there.

Nikki gets in the ring and takes Bayley down. She goes for the cover but again Bayley kicks out. Nikki got a hold of Sasha’s Boss ring from last week and she throws it onto Sasha. Bayley on the ring apron and she hands Nikki up on the second rope. Bayley gets on the announce table and mocks Nikki but Nikki trips her down. She throws Bayley onto the barricade.

Winner: Bayley via Pinfall to retain the SmackDown Women’s Championship.