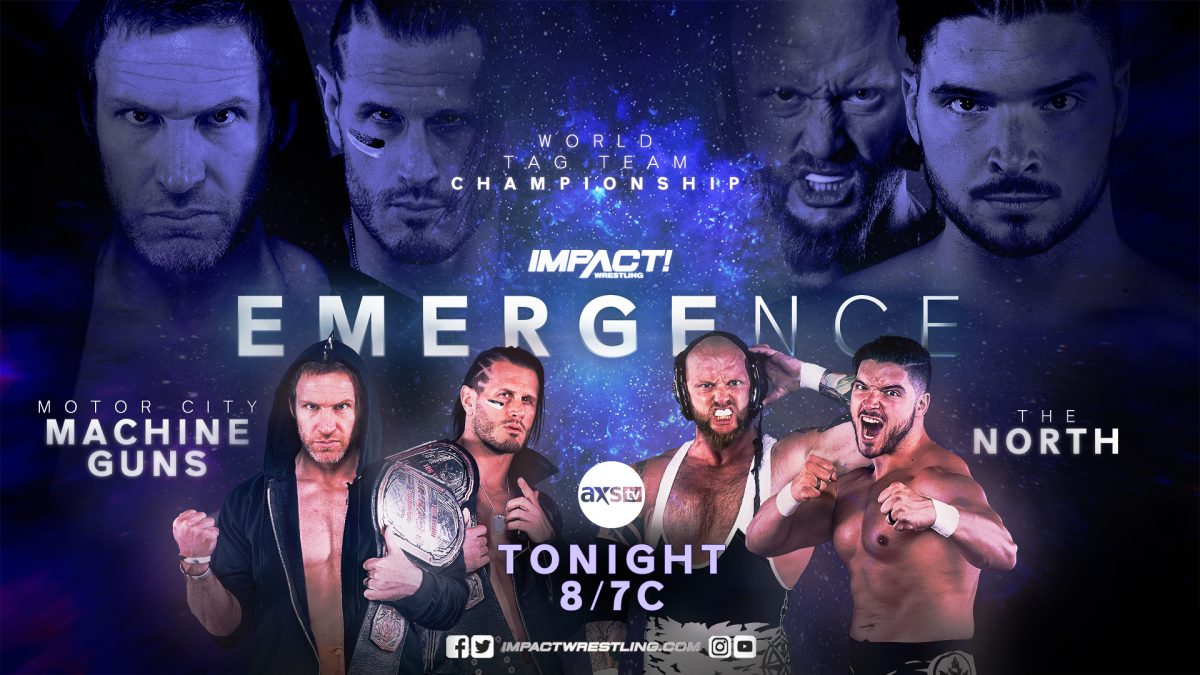 The two-week special known as Emergence begins tonight on AXS TV and Twitch.

The first person to score a pinfall or submission will leave as X-Division Champion. Rohit insists that he’s only here to ensure Chris Bey retains his title. TJP jumpstarts the match by taking out both Bey and Rohit with a crossbody to the floor. TJP maneuvers both of his opponents into a unique double submission. Bey inadvertently catches Rohit with a kick, sending him to the outside. TJP hits Bey with a springboard crossbody. TJP connects with a Tombstone Piledriver but instead of going for the cover, he climbs to the top where he’s met by Rohit. TJP hits Rohit with a thunderous Superplex. Bey puts his unique offense on display, planting TJP with a gut-wrench DDT. Bey is about to tap to a submission from TJP but Rohit prevents his hand from hitting the mat. Rohit goes against his word, connecting with a double stomp on Bey to win the X-Division Championship.

We return to Wrestle House where Crazzy Steve and John E Bravo’s play-date takes a turn for the worse. Larry D reveals a new classy side of himself, Lawrence D.

Ace Austin and Madman Fulton have lit a fire under The Good Brothers. Later tonight, they meet in tag team action.

This TNA World Heavyweight Championship invitation was intended for Suicide but it turned out to be Trey Miguel under his mask! Moose shows off his strength advantage in the early going. Moose dropkicks Trey off the top and he topples to the floor below. Moose continues the assault by dropping Trey face-first onto the apron. Trey tries to build momentum with multiple strikes but Moose shuts him down with a fall-away slam. Moose is absolutely dominant but starts trash-talking. It ends up costing him as Trey finally gets something going with a flurry of high-speed offense. Trey counters a vertical suplex into a huge DDT. Moose catches Trey in mid-air, then swings him into the steel-guardrail. Trey barely beats the referee’s 10 count. Moose puts him away with the Lights Out spear.

The Eric Young of today is him in his purest form.

“I was elite before being elite was cool.”

The @TheEricYoung we see today is him in his purest form. #Emergence #IMPACTonAXSTV pic.twitter.com/aPuph70PuU

Hernandez pays Reno Scum for attacking Rhino and retrieving his money for him last week. Hernandez says that he will have more work for them.

Brian Myers interrupts Jimmy Jacobs’ interview with Willie Mack. Myers says that doing what he was supposed to do got him nowhere in this business. Myers says he’s taking his career into his own hands when Willie Mack jumps him out of nowhere.

“It disgusts me that major decisions in this business are made by some out of touch 70 year old man.” @Myers_Wrestling hijacked @Willie_Mack‘s interview to get his message across. #Emergence #IMPACTonAXSTV pic.twitter.com/Pk8eZOeTgY

Heath wants you to get #Heath4IMPACT trending on social media.

“Joe Biden, you wanna pick your running mate on a Tuesday. Man nothing happens on Tuesday but IMPACT Wrestling. And what should have been trending was #Heath4IMPACT!” #Emergence #IMPACTonAXSTV @HEATHXXII pic.twitter.com/WGeDjIorVK

The Good Brothers are furious, taking the fight to Ace in the early going. It’s a clash of giants as Gallows and Fulton square off. Fulton distracts Anderson from the apron, allowing Ace to gain control with a dropkick. Ace and Fulton cut off the ring as they wear down Anderson. Fulton drops Anderson back-first into the knees of Ace. Anderson slips free and creates separation with a big Spinebuster to Ace. Gallows receives the hot tag and goes on the attack. The Good Brothers attempt the Magic Killer on Ace but Fulton breaks it up. The match breaks down as Gallows sends Fulton over the guardrail. The Good Brothers connect with the Magic Killer on Ace to win.

At WrestleHouse, The Deaners are trying to get to the bottom of who stole their beer. Meanwhile, Rosemary’s plan of making John E Bravo jealous seems to be working when she sets a date with Lawrence D for next week.

Rosemary shows preferential treatment to Taya when she allows her to choke Kylie in the corner. Kylie counters an Irish whip into an arm drag, then connects with a superkick for two. Taya hits a snap back suplex for a near fall of her own. Kylie connects with the Kylie Special to put Taya away.

The North double team Shelley. Page hands Shelley off to Alexander, who hits him with a backbreaker. It’s then Page’s turn to target the back of Shelley, as he hits a backbreaker of his own. Alexander whips Page into the corner but Shelley gets his feet up. Shelley rolls into the corner, tagging Sabin into the match. Sabin soars through the air with a missile dropkick to Page. Sabin dives through the legs of Shelley, colliding with Alexander on the floor. Shelley misses a top rope double stomp. Sabin dropkicks Page into a Flatliner from Shelley for two. The North plant Sabin to the mat with their signature double team offense for a near fall. The Guns’ tandem offense continues as they hit Page with the neckbreaker crossbody to win.