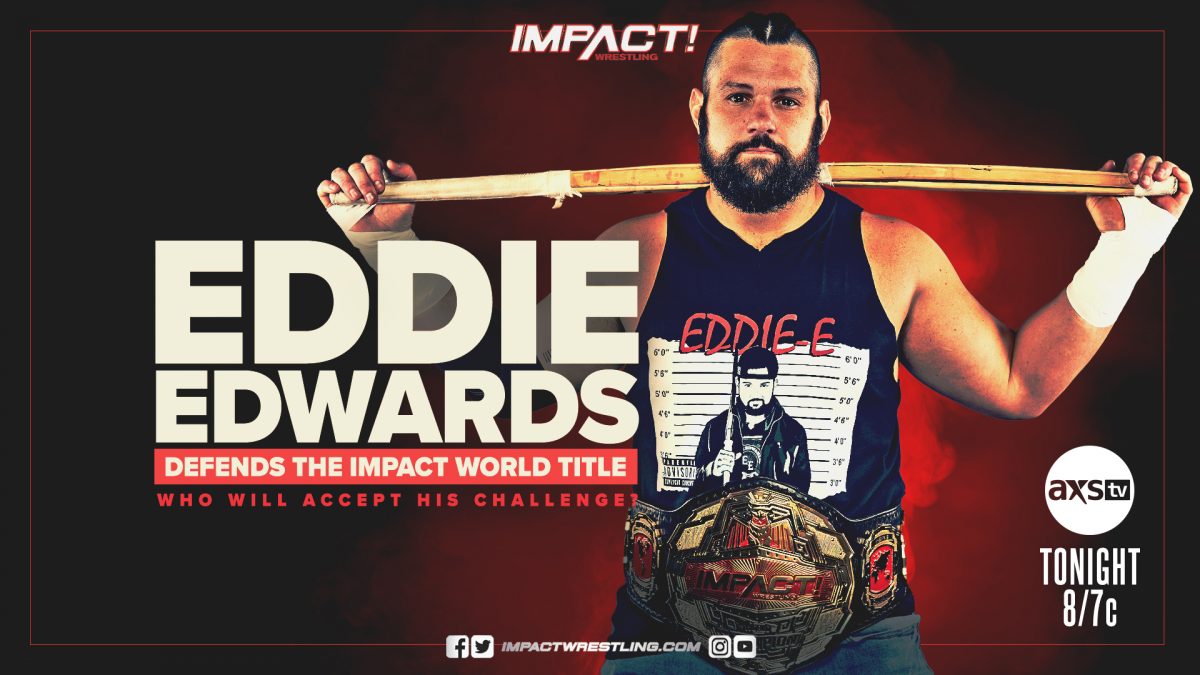 IMPACT! opens with a wild brawl between Willie Mack and Eric Young in the backstage area. These two are scheduled for a singles match tonight but Willie doesn’t want to wait. After all, EY delivered a brutal attack on Rich Swann during his retirement last week. Security tries to break it up but to no avail. They brawl to the ringside area and the match is on!

Willie hits a slingshot crossbody over the top rope to the floor. Both men are perched on the top when EY bites the head of Mack, sending him crashing to the mat. EY follows up with a big elbow drop. Willie slams EY, then follows up with the standing Moonsault for two. EY rakes the eyes of Willie but gets caught with a Stunner out of nowhere. Willie grabs a steel chair to exact his revenge but that gives EY time to recover. EY connects with the Piledriver to win.

Before they face off at Emergence next week, The Good Brothers are on the hunt for Ace Austin and Madman Fulton.

Back at Wrestle House, Taya Valkyrie has organized a viewing of her greatest hits. Taya notices that Cousin Jake and Susie are missing. Raising suspicions that they may be developing feelings for each other, their friends Cody Deaner and Alisha make up an excuse that they both have food poisoning. Meanwhile, Rosemary is visually jealous that John E Bravo is massaging Taya. Crazzy Steve approaches Rosemary and reunites with his former partner in Decay. Meanwhile, Cody Deaner and Alisha prepare Cousin Jake and Susie for their big date.

Wrestle House is about to settle in for the cinematic masterpiece that is @TheTayaValkyrie‘s greatest hits! #IMPACTonAXSTV pic.twitter.com/Fq2zpwL5Kz

Rhino is coming out of the bathroom when he’s jumped by Reno Scum. They were hired by Hernandez to retrieve the money he lost to Rhino in a match recently.

Last week, Kimber Lee struck a deal with Knockouts Champion Jordynne Grace. If she takes out Jordynne in this match, she will be next in line for a title shot. But if she doesn’t, Jordynne gets her rematch against Deonna next week at Emergence Night One. Jordynne hits a strong Irish whip into the corner. Jordynne charges into the turnbuckle but Lee uses the referee as a shield. Jordynne hits a Spinebuster for two. Lee connects with a step-up Enzuigiri, followed by a German suplex for a near fall of her own. Lee attempts a top rope Swanton but Jordynne gets her knees up and locks in a choke to win.

Before her guests arrive, Madison announces that Locker Room Talk has received its first sponsor and it’s none other than Heath! We see a 30 second spot where Heath tells the world to get #Heath4IMPACT trending on social media so that he can get a job. Madison welcomes on RVD and Katie Forbes but before she can get the conversation going, RVD and Katie turn their attention to each other. Madison leaves, and the impromptu first episode of the RVD and Katie show begins. As RVD and Katie interview each other, Sami Callihan hacks his way into the room and attacks The Whole F’N show! Katie turns the tables by spraying something into the eyes of the ICU hacker, allowing her and RVD to beat him down.

Trey Miguel steals Suicide’s mask from the locker room and puts it on. Moose gives Suicide an invitiation for a TNA World Heavyweight Championship match next week but he’s unaware that it’s really Trey Miguel!

While the guests at Wrestle House continue watching Taya Valkyrie’s greatest hits, Rosemary looks them over for her plan to make John E Bravo jealous. Meanwhile, Cousin Jake and Susie go on their date. XXXL get into an argument after Larry D is fixated on Rosemary and turns down food from Acey Romero. Tommy Dreamer announces that it’s “match time!” and it’s on!

Acey vows to show Larry tough love in their match at Wrestle House but after some back-and-forth action, the end comes for Acey when he gets caught with a knockout punch from Larry D.

Knockouts Champion Deonna Purrazzo is set to defend her Knockouts Title in a rematch against Jordynne Grace at Emergence Night Two – but she ups the ante by challenging Jordynne to the first-ever 30-minute Knockouts Ironman match!

The North receive their rematch for the Tag Team Championships when they face the Motor City Machine Guns next week at Emergence Night One.

Instead of making their way to the ring, Kiera Hogan and Tasha Steelz hide on the other side of the stage. As Havok and Nevaeh are making their entrance, they get jumped by Kiera and Tasha on the ramp! Havok is about to hit Tasha with a running boot in the corner when Kiera stops her from the floor. Tasha hits Havok in the back with a steel chair but it has no effect on the Kaiju Queen. Kiera sidesteps Havok, sending her into the steel ringsteps. Nevaeh connects with a strong clothesline on Tasha. As she looks to follow up, she gets hit with a lead pipe from Kiera. Tasha connects with a neckbreaker on Nevaeh for two. Havok kicks Kiera into a release German suplex from Nevaeh. All four women exchange strikes in the middle of the ring. Kiera and Tasha superkick Havok through a table on the floor. In the ring, Kiera hits Nevaeh with the swinging neckbreaker to win.

The Good Brothers are furious after Ace got Doc Gallows arrested last week. They tell Scott D’amore that they’re going out to the ring and they’re not leaving until they get Ace Austin and Madman Fulton.

EC3 plays mind games with Moose and through a projection, tells him that the self-proclaimed TNA World Heavyweight Champion must be destroyed because of everything he’s synonymous with.

In the opening minutes, The Good Brothers make their way to the ring and attack both Dez and Suicide, bringing the match to a halt.

The Good Brothers call out Ace Austin and Madman Fulton. They appear on the video screen but reveal that they’re not even in the state, let alone the arena. Ace tells Gallows and Anderson that if it’s a fight they want, it’s a fight they’ll get but it will be on his terms – next week at Emergence Night One.

Rohit Raju convinces Chris Bey to give both him and TJP a shot at the X-Division Title in a triple threat match so that Bey doesn’t have to fend off both TJP and Fallah Bahh on his own.

After Su Yung begins to emerge from within Susie on her date with Cousin Jake, the Deaner is scared off. Alisha questions Susie if she followed her advice. Susie ensures her that she did but suggests that maybe Alisha’s advice was bad. Angry at Susie’s words, Alisha calls on Tommy Dreamer for “match time!”.

Susie slaps Alisha across the face to open things up. Both women take each other out with a double clothesline. Steve begins to count but not in the most traditional fashion. Susie rolls her up for the nine count to win.

After the match, Taya Valkyrie tries to persuade everyone to come back inside and finish watching her greatest hits. Kylie Rae says that everyone wants to go to bed but Taya dismisses her. Susie reminds Taya that Kylie is the #1 contender and has defeated her twice. Kylie challenges Taya to a match to see if she can defeat a champion. Tommy Dreamer is about to announce “match time!” but Rosemary stops him, allowing Taya to retreat.

Eddie Edwards is in the ring and immediately calls out Eric Young for his heinous attacks on Rich Swann. Eddie says that if EY wanted his attention, he’s got it. Eddie challenges EY to answer his Open Challenge for the World Title but instead, Brian Myers makes his debut! Myers says that he’s the most professional wrestler and he’s accepting Eddie’s open challenge right now!

Eddie takes control in the early going with a clothesline over the top rope. Myers sends Eddie face first into the steel ring post. Eddie fights back with a big dive to the floor but ends up hurting himself when he overshoots the protective mats, causing his knee to collide with the concrete. Eddie counters a vertical suplex into one of his own, sending Myers into the turnbuckles. Myers connects with a big DDT for two. Eddie hits a superkick, followed by the Tiger Driver for a near fall. Myers ducks a Boston Knee Party but gets caught on the second attempt. Eddie scores the pin to retain the World Title.