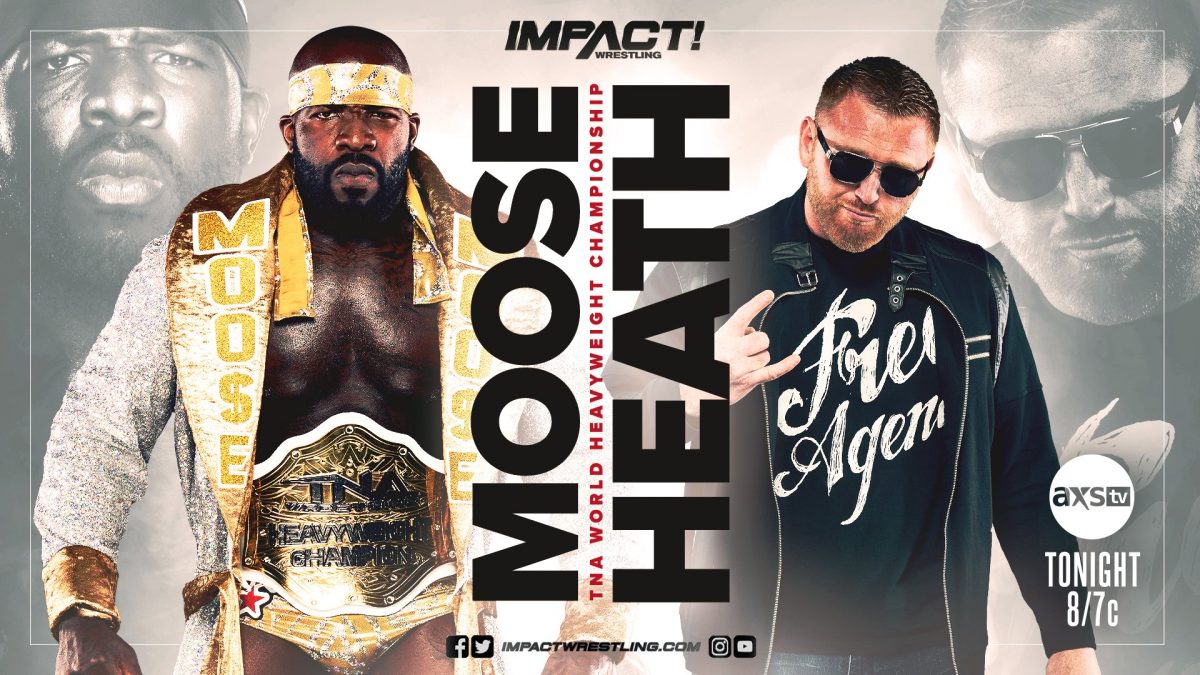 If Heath wins, he earns a apot on the IMPACT roster. The action spills to the outside in the early going. Heath drives Moose into the steel guardrail, then the ring post. Moose turns the tide when he drops Heath throat first on the top rope. Moose hits a big dropkick for two. Moose remains in control with a strong Irish whip into the corner. Heath delivers a flurry of strikes to finally get the big man off his feet. Heath inadvertently sends Moose crashing into the referee. Heath hits the Wake Up Call and has Moose pinned for three, but the referee is knocked out. Moose hits a low blow as the referee recovers to pin Heath for the win.

Gia Miller interviews Willie Mack ahead of Rich Swann’s in-ring address tonight. Rumors are circulating that Swann’s in-ring career may be over. Willie says he is unaware of what Rich is going to say tonight – he’s just going to have to wait like everyone else.

“I have arrived in IMPACT Wrestling to reclaim the TNA World Heavyweight Championship and burn its legacy to the ground.” #IMPACTonAXSTV @therealec3 pic.twitter.com/9AqfGhJfd2

Jimmy Jacobs is in the ring to conduct a sit-down interview with new Tag Team Champions, the Motor City Machine Guns. Alex Shelley says they came back to IMPACT Wrestling to challenge themselves. He praises Chris Sabin’s accomplishments, including winning the IMPACT World Title in 2012. Sabin recalls training with Shelley and discovering they still had amazing chemistry together. The North interrupt and Ethan Page still looks disturbed after losing the Tag Team Championships. Josh Alexander accuses IMPACT of giving preferential treatment to the Motor City Machine Guns, claiming that they did not deserve a shot at the Tag Titles. Page says they did not beat The North at 100%. The North announce they are cashing in their rematch clause at the two-week special event, Emergence.

Kimber Lee confronts Knockouts Champion Deonna Purrazzo who is preparing to defend her title against former champ, Jordynne Grace at Emergence. Lee offers to take out Grace ahead of her rematch in exchange for a future Knockouts Title opportunity. The Virtuosa accepts, and the deal is made.

Taya Valkyrie realizes she’s trapped in Wrestle House and needs to make the best of a bad situation. Meanwhile, Cousin Jake continues his attempts to impress Susie. Taya organizes a group activity to get rid of some of the houseguests’ bad personal hygiene. Kylie Rae reminds Rosemary that she’s the number one contender for the Knockouts Title and would like to get back to the IMPACT Zone soon. Rosemary says they will leave when John E Bravo learns to take a hint. Alisha offers to help Susie seduce Cousin Jake. Johnny Swinger makes a comment about being able to handle both Alisha and Susie. And just like that, Tommy Dreamer announces that it’s “Match Time!”.

Much to Swinger’s surprise, it’s Alisha and Susie who sweep him off his feet in the opening moments of the match. Alisha and Susie make quick work of Swinger after hitting a double splash for three.

Kylie Rae asks John E Bravo when he’s going to take the hint from Rosemary so that they can all get back to the IMPACT Zone. Bravo says he knows why Rosemary is mad at him and he knows what she wants.

Ace Austin and Madman Fulton frame The Good Brothers for having an open container while operating a motor vehicle. The police arrive to investigate. An officer approaches Doc Gallows from behind but he thinks it’s Ace. Gallows mistakenly strikes an officer, leading to his arrest.

Eddie Edwards is set to defend his World Title in another open challenge. Sami Callihan’s music hits but he’s attacked on the stage by Rob Van Dam and Katie Forbes. RVD lays out Callihan with a steel chair as Katie assaults him after he’s down. Shockingly, Callihan recovers and makes his way to the ring for his World Title opportunity.

These two are set to renew a storied rivalry here tonight. Eddie hits a Tiger Driver right out of the gate for two. Both men exchange dives to the outside, sending each other crashing into the steel guardrail. Callihan delivers a sick piledriver on the ring apron. Callihan continues his beatdown outside the ring as he looks to inflict pain on the World Champion. Eddie shows signs of life by hitting a Blue Thunder Bomb. Callihan comes right back with a Brainbuster for another near fall. Callihan thinks he has the match won when he hits yet another Piledriver but Eddie gets his foot on the rope. Callihan grabs a steel chair but thinks twice before using it. As he throws it to the floor, Eddie connects with back-to-back Boston Knee Parties to win.

Kylie Rae witnesses John E Bravo leave Wrestle House after she told him to take Rosemary’s hint earlier tonight. Both Rosemary and Taya are searching for him when they learn of his departure from Kylie. Rosemary is furious and once again, it’s “Match Time!” at Wrestle House.

Kylie is essentially in a handicap match here as Taya sides with Rosemary. Taya distracts Kylie in the early going, allowing Rosemary to attack her from behind. Kylie gets Rosemary in a pinning predicament but Taya purposely employs a slow count. Kylie lightens the mood by pretending to take Rosemary’s nose. The Demon Assassin has clearly never played that game before and takes it literally. Rosemary hits the spear but even with Taya’s fast count, Kylie is still able to kick out. Kylie puts Rosemary away with the Kylie Special to win.

After the match, John E Bravo returns to Wrestle House and checks on Rosemary. Bravo tells her that he’s aware of how she feels about him. Taya interrupts the heartfelt moment and drags him away. Rosemary reiterates that they will remain in Wrestle House for as long as it takes.

Karl Anderson tells Doc Gallows on the phone that he’s going to get him out of jail. Ace Austin and Madman Fulton jump Anderson, delivering a two-on-one beatdown. Fulton holds Anderson as Ace clobbers him with his baton.

Hernandez hires Reno Scum to help take out Rhino and get his money back.

Rohit Raju has been stirring up a rivalry between TJP and current X-Division Champion, Chris Bey. Fallah hits Rohit with a big belly-to-belly suplex. Rohit uses innovative attacks to prevent TJP from making the tag, capping things off with a vicious running knee. TJP connects with a tornado DDT on Bey, allowing him to create space and make the tag to Fallah. The big man charges, squashing Rohit in the corner. Fallah goes for one more but it costs him as Rohit counters with another running knee. TJP hits a springboard forearm on Bey. TJP is about to fly but Rohit holds him up, allowing Bey to avoid the Swanton. Bey attempts his signature springboard cutter but TJP catches him the cross arm-breaker, forcing the champ to submit.

Rich Swann returns to the IMPACT Zone for the first time since being brutally attacked by Eric Young. Rich talks about making a faster-than-anticipated recovery from his original leg injury, which allowed him to return for the Five-Way World Title match at Slammiversary. However, all that hard work and months of rehabilitation were thrown out the window by Eric Young. Swann makes the emotional announcement that he is retiring from in-ring competition tonight. The locker room empties as they applaud Rich for his amazing work as a professional wrestler. Swann takes one final look at the IMPACT Zone from the top of the ramp when Eric Young attacks him from behind. Young assaults Rich with his crutch before the locker room chases him to the back. IMPACT! goes off the air.