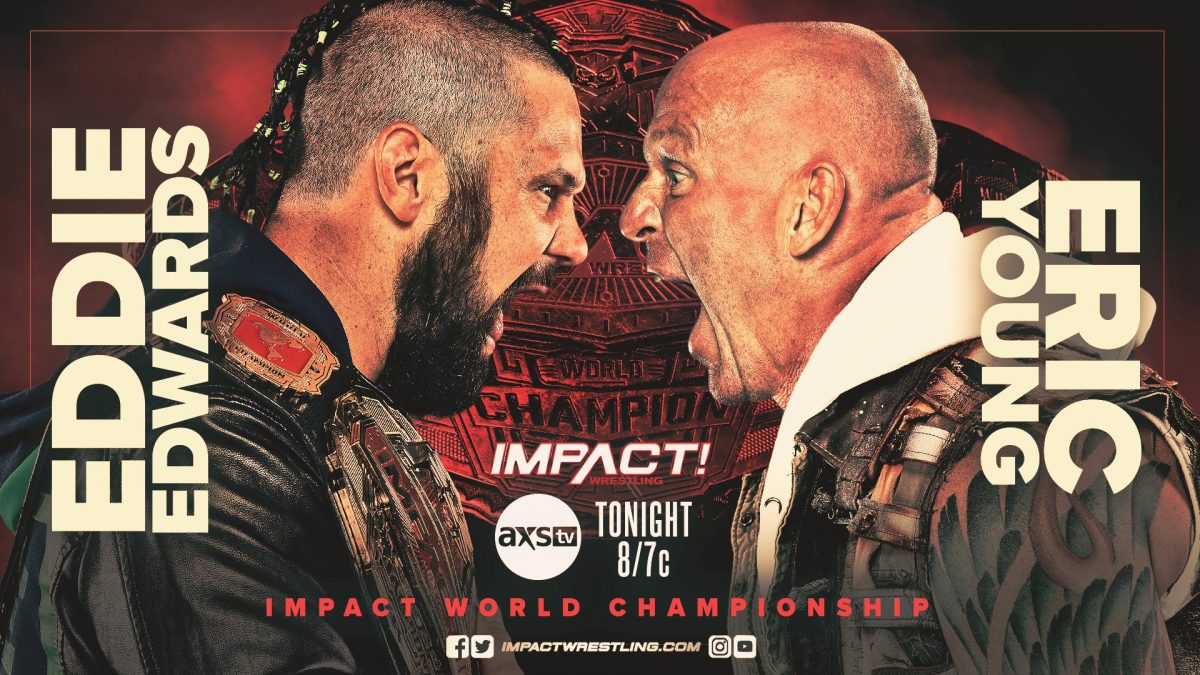 Callihan knocks RVD off the apron to jump-start the match. Katie distracts Callihan at ringside, allowing RVD to gain control with a clothesline. Katie continues to get involved when she picks the ankle of Callihan, halting his momentum. RVD wraps up Callihan on the steel guardrail, then delivers a strong spin kick. Callihan counters Rolling Thunder with his knees, then follows up with a low cutter. RVD connects with a split-legged Moonsault for two. Callihan scores a near fall of his own with a hangman’s style cutter. Both men exchange pins with Callihan getting the upperhand and the win with a roll up.

After the match, Callihan has had enough of Katie but RVD blindsides him before he can do anything. RVD and Katie deliver a 2-on-1 assault to Callihan with a steel chair.

Hernandez defeats Fallah Bahh in an arm wrestling contest. Afterwards, he tells Reno Scum that if they take out Rhino in their 2-on-1 handicap match tonight, all his prize money is theirs.

A roll of cash is in Reno Scum’s future if they can deal with @Rhyno313 tonight. #IMPACTonAXSTV @SuperMexCTM @Thornstowe_Scum @legendbaby81 pic.twitter.com/T7oGyGzqrM

After losing to Crazzy Steve in a Blindfold match last week, Johnny Swinger must now dress like Crazzy Steve as his punishment. Steve reveals his creation. While the cast of Wrestle House tries to hold back their laughter, Tommy Dreamer informs John E Bravo that he will be the special referee for tonight’s Rosemary vs Taya Valkyrie Winner Take All match.

Last week, Rhino and Heath attempted to get #Heath4IMPACT trending on social media so that management would allow Heath to complete alongside his former tag team partner in this match. Unfortunately, it doesn’t look like it worked and the bell rings for a handicap match. Thornstowe hits a standing Moonsault. Luster wears down Rhino with his incredible strength. Rhino fights back by sending Luster over the top rope to the floor with a clothesline. Rhino Gores Luster on the outside. A cameraman attacks Thornstowe from behind, but when they take their mask off, it turns out to be Heath. Rhino scores the pin on Thornstowe to win.

Executive Vice President Scott D’Amore instructs security to remove Heath from the building, as he does not work for IMPACT Wrestling.

The mind games continue as EC3 challenges Moose to come find him and reclaim the TNA World Heavyweight Championship that he stole.

Backstage: The Good Brothers, The Rascalz

The Good Brothers are the life of the party backstage. Dez and Wentz are unlike their usual selves, and are seriously focused on their match with Ace Austin and Madman Fulton tonight.

At Wrestle House, Larry D is in a bad mood after awakening from the love spell that Rosemary put him in. After the Deaners accuse XXXL of stealing their beer, a huge brawl breaks out in the kitchen. The two teams fight all over Wrestle House before Lawrence D returns. He takes out his own partner by spraying him with “ring rust”. Susie walks in on the brawl and is angry that they broke the truce. We see Susie’s dark side emerge and she leaves the room with blood on her hands. Tommy Dreamer is terrified and runs off.

Ace and Fulton take control in the early going. From the second rope, Fulton pulls Wentz up into the air with a choke. Wentz makes the tag to Dez, who quickens the pace. Dez catapults Ace into a superkick from Wentz. The flurry of offense continues when Dez and Wentz exchange dives, crashing into Fulton on the floor. Wentz connects with a Moonsault off the top rope to the outside. Meanwhile, Dez hits a Swanton on Ace for the huge upset victory.

After the match, reigning Tag Team Champions, the Motor City Machine Guns praise the Rascalz as one of the best tag teams in IMPACT Wrestling. They offer them a shot at the Tag Team Championships when Ace Austin and Madman Fulton jump the Rascalz from behind. Chris Sabin and Alex Shelley hit the ring, sending Ace and Fulton retreating.

Deonna Purrazzo asks Kimber Lee to watch her back during her Black Tie Affair tonight as she anticipates an interruption from Jordynne Grace.

TJP challenges X-Division Champion Rohit Raju to a title match but Rohit reminds him that former champ Chris Bey is first in line.

This match is winner take all – including Bravo. Rosemary charges at Taya in the corner and delivers a flurry of strikes. Rosemary hits a suplex for two and argues with Bravo to count faster. Rosemary connects with a spear but Taya comes right back with a spear of her own. Both Taya and Rosemary take each other out with in-sync kicks to the head. Taya avoids another spear in the corner, then follows up with Road to Valhalla to win.

Post-match, Bravo gets down on one knee and proposes to Rosemary. He says that even though he must remain Taya’s manager, he wants Rosemary to be his wife. Taya gives them her blessing and Rosemary says yes. Kylie Rae is thrilled when Rosemary and Taya say they can all leave Wrestle House and return to the IMPACT! Zone because she is the #1 contender to the Knockouts Title. We witness the emotional conclusion to Wrestle House as Crazzy Steve reveals that he was the one who stole The Deaners’ beer.

IMPACT stars surround the ring as Kimber Lee introduces the Knockouts Champion, Deonna Purrazzo. The Virtuosa speaks on defeating Jordynne Grace in the first-ever 30 minute Knockouts Ironman match last week. Thicc Mama Pump interrupts but actually congratulates her on the huge victory. Jordynne says that Deonna’s reign won’t last long when Tenille Dashwood makes her return. Jordynne questions how Tenille can be next in line for a title opportunity when she doesn’t even show up for work most of the time. Out of nowhere, the cast of Wrestle House appears in the ring after Rosemary teleported them back to the IMPACT! Zone. A brawl breaks out that culminates with Kylie Rae hitting a superkick on Lee as Purrazzo retreats up the ramp.

Gia Miller interviews Brian Myers who reflects on his victory over Willie Mack last week. Myers says he is going to offer Willie a handshake as a sign of respect – after all, that’s what the most professional wrestler would do. Moose is on the search for EC3 and interrupts the interview to ask Myers if he’s seen him. Myers is furious at the lack of professionalism shown by Moose and storms off.

EY hits a neckbreaker on the ring apron as he targets the neck of Edwards. EY continues to dominate the champion with multiple forearm shivers. Eddie fights back with a Blue Thunder Bomb to finally create some separation and regain his bearings. Eddie hits a backpack stunner out of the corner for two. EY sends Eddie flying off the top, then connects with a huge elbow drop for a near fall. Eddie hits a slingshot crossbody to the floor but may have buckled his knee in the process. It looks as though Eddie has EY beat with the Tiger Driver but isn’t able to get a strong pin due to his injured knee. EY grabs the World Title but it only serves as a distraction so he can crack Eddie over the head with his hockey mask. EY follows up with the piledriver to win the match and become the new IMPACT World Champion.

EY rubs salt in the wound as he continues to attack Eddie after the bell. IMPACT! on AXS TV goes off the air.

In a post-credits scene, Moose discovers that EC3 has been stalking him.