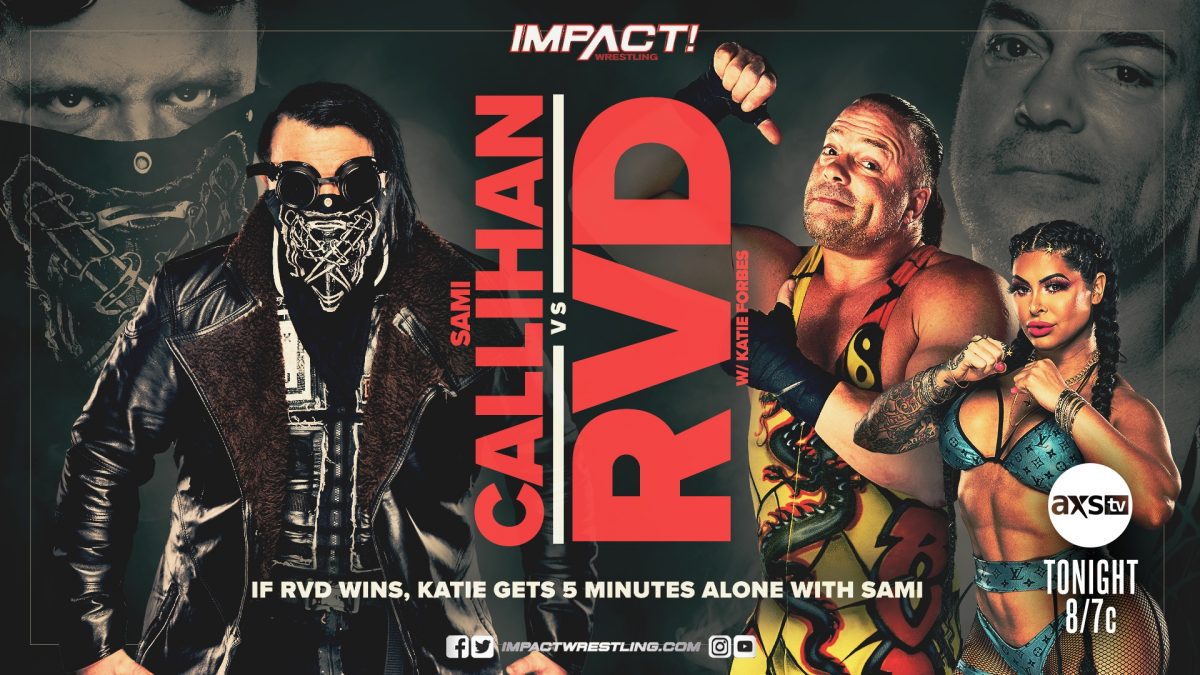 The winner of this three-way match will immediately challenge Rohit Raju for the X-Division Championship. Bey takes out both of his opponents with unique double team offense. The two-for-one’s continue as TJP locks in an innovative double submission. TJP connects with a springboard forearm to Bey, followed by the Three Amigos. Trey hits TJP with a tilt-a-whirl head scissors. Bey catches Trey with a stunning mid-air cutter. TJP locks in the ankle lock on Bey. Meanwhile, The Fresh Prince of Mid-Air soars off the top with double knees to TJP for the win.

Rohit charges the ring to immediately start his X-Division Title defense. Out of nowhere, Rohit rolls up Trey with a hold of the tights to retain the gold in quick fashion.

World Champion Eric Young says everything that happens from here on out will be on the conscience of Scott D’Amore for granting Rich Swann a World Title opportunity at Bound for Glory.

“From this point on my conscience will be clear.” @TheEricYoung is at the end of the road less traveled for @GottaGetSwann. #IMPACTonAXSTV pic.twitter.com/Vs2kmCDGdK

Gia Miller attempts to interview Tenille Dashwood ahead of her in-ring return vs Jordynne Grace later tonight. Her personal photographer Kaleb answers the door because Tenille is busy with her strict preparation regimen.

Will we see more signs of Su Yung tonight? Lee hits a strong backbreaker in the early stages of the match. Lee dropkicks Susie through the ropes to the floor. Lee distracts the referee, allowing Deonna to attack Susie on the outside. Susie attempts the Aracnarana but Lee counters into a Boston Crab. We continue to see offense reminiscent of Su Yung. Lee hits a sit-down powerbomb for two. Deonna inadvertently strikes Lee on the top rope. Susie capitalizes with Su Yung’s finisher, the Panic Switch, to win.

After the match, Deonna attacks Kylie from behind. Susie attempts to fight her off but Deonna locks in the cross armbar. Deonna falls victim to the numbers game as Kylie sends her retreating up the ramp. #1 contender Kylie Rae gets on the mic and challenges The Virtuosa to a Knockouts Championship match at Bound for Glory.

After they stole a roll of cash from Hernandez last week, Heath and Rhino now have the funds to continue the #Heath4IMPACT campaign with a new-and-improved commercial, featuring celebrity endorsements and messages from his family.

.@HEATHXXII called in some ALL-STAR cameos in the most inspirational and moving #Heath4IMPACT video yet. #IMPACTonAXSTV @Rhyno313 pic.twitter.com/cNUhhfhxsW

There’s an altercation in the backstage area between the Tag Team Champions Motor City Machine Guns, the Good Brothers and the Rascalz. As the road to Bound for Glory continues, everyone wants an opportunity at the titles. The Rascalz are more determined than ever and challenge the Good Brothers to a match.

EC3 gives out Moose’s telephone number to the entire world, asking for any relevant information that will help the self-proclaimed TNA World Heavyweight Champion find his stolen championship.

Taya Valkyrie asks Rosemary why she didn’t accompany her to ringside for her match against Kiera Hogan last week. Rosemary agrees to help Taya with her problem of Kiera and Tasha Steelz, if Taya helps her secure Father James Mitchell to officiate her wedding. Meanwhile, John E Bravo briefs his groomsmen, who are revealed as the Deaners, Johnny Swinger, Crazzy Steve, Fallah Bahh and Alisha.

After last week’s hiccup, @WeAreRosemary and @TheTayaValkyrie are back on the same page. #IMPACTonAXSTV pic.twitter.com/J5nxDb5lk3

Brian Myers makes a mess in the backstage area after Gia Miller accuses him of cheating in his two victories over Willie Mack. Tommy Dreamer confronts him and orders him to clean it up. Myers refuses, causing tension between the two.

The Deaners make their way to the ring but are blindsided by World Champion Eric Young. Cody Deaner begins to fight back but EY quickly turns it around with a vicious Piledriver. EY is about to do some serious damage when Cousin Jake comes to the aid of his partner. He makes a mistake by turning his back, allowing the World Class Maniac to attack him from behind. Jake suffers the same fate as Cody as EY takes him out with a Piledriver.

Security comes down to ringside but they’re clobbered by EY. Scott D’Amore has seen enough and gets physically involved to stop the assault. EY puts his hands on D’Amore but the returning Eddie Edwards makes the save.

Backstage, Eddie Edwards gets in Scott D’Amore’s face and tells him he needs a World Title rematch against Eric Young to end his reign of terror. D’Amore grants him his opportunity at Victory Road, October 3rd exclusively on IMPACT Plus.

Callihan whips RVD into the steel guardrail. Katie hooks the leg of Callihan, allowing RVD to gain control by driving him off the apron into the steel. RVD innovates as he connects with Rolling Thunder on the floor. RVD distracts the referee as Katie hits Callihan with a running kick. RVD connects with a springboard kick to continue the assault. Callihan begins to fight back but RVD shuts him down with a rake to the eyes. Callihan hits a big DDT for the near fall. Katie sprays hairspray into the eyes of Callihan. RVD gets him in a pinning predicament to score the victory.

Katie immediately lays in the boots to Callihan. RVD searches for a steel chair underneath the ring. RVD is perched on the top rope but Callihan whips the chair at him, sending him crashing to the floor. In a shocking act, Callihan delivers a piledriver to Katie Forbes and stands tall.

As David Penzer introduces Tenille Dashwood, he is interrupted by Kaleb with a K who opts to introduce her himself. This is Tenille’s return to in-ring competition as she gains control in the early going by pulling Jordynne all the way from the apron to floor. Both competitors are jockeying for position when Tenille hits a reverse DDT for two. Tenille fights off the Grace Driver but gets caught with a Michinoku Driver instead. Tenille hits a double stomp in the corner, followed by the Taste of Tenille for another near fall. Kaleb gets on the apron as he pretends to take a photo of Tenille but his true intention is to distract Jordynne while she goes for the Grace Driver. Tenille capitalizes with the Spotlight Kick off the distraction to win.

In a post-credits scene, Eddie Edwards is blindsided by a mystery attacker on his way out of the arena.

Who just attacked @TheEddieEdwards as IMPACT went off the air?! #IMPACTonAXSTV pic.twitter.com/5zn3lvvca3