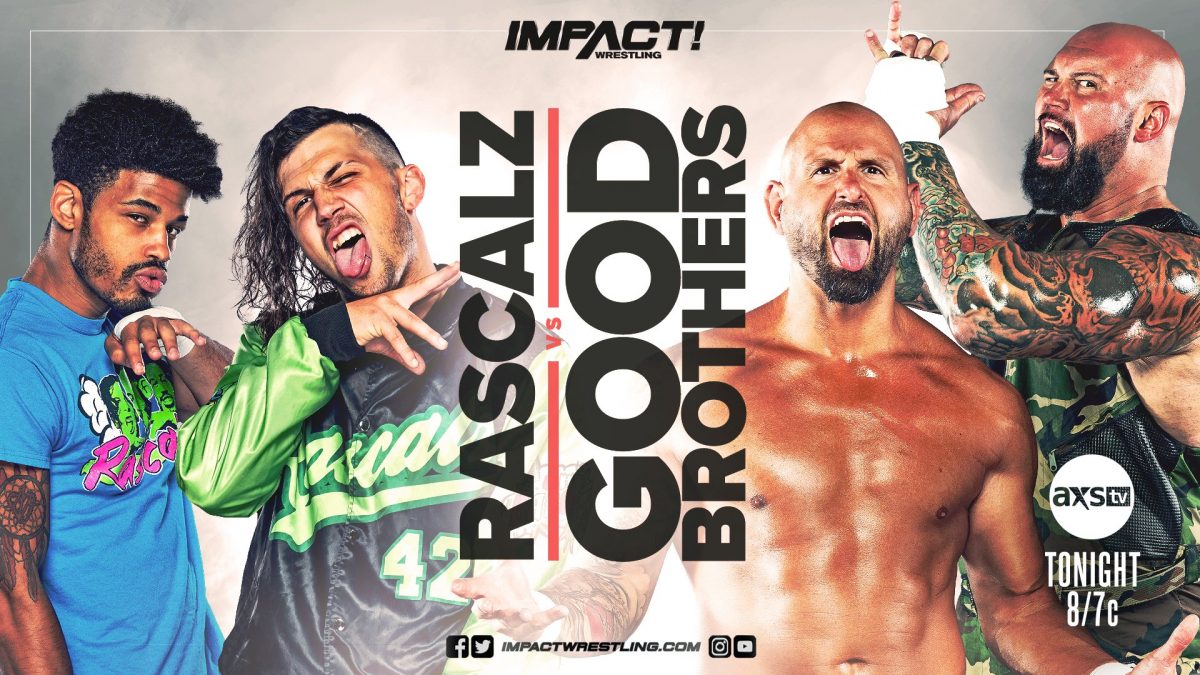 As Taya Valkyrie and Rosemary continue to plan her wedding with John E Bravo, they must now face the wrath of Havok and Nevaeh. Rosemary needs Father James Mitchell to officiate her demon wedding but Havok eliminated him in the Undead Realm. When Rosemary tried to enlist her help in order to revive Mitchell, the Kaiju Queen became enraged.

The terrifying duo of Havok and Nevaeh wear down Taya, cutting off the ring in the process. Havok connects with a backbreaker, followed by a clothesline. Taya breaks free and makes the tag to the Demon Assassin, who hits a pair of Slingblades. Rosemary locks in the Upside Down on Havok to do some serious damage. Rosemary flies off the top with a crossbody. Taya hits the Road to Valhalla on Nevaeh to pick up the win.

After the match, Kiera Hogan and Tasha Steelz blindside Rosemary and Taya Valkyrie from behind before retreating up the ramp.

The Motor City Machine Guns interrupt the Good Brothers’ telling jokes and argue about who had more success wrestling in Japan.

“If you guys wrestled half as good as you told stories, one day you might be champions too.”

In a backstage interview, Knockouts Champion Deonna Purrazzo is shocked to learn that she will be defending her title against Susie this Saturday at Victory Road exclusively on IMPACT Plus.

.@DeonnaPurrazzo may plan to snap @IamKylieRae‘s arm at Bound For Glory but she has a title defense against @realsuyung THIS SATURDAY at Victory Road first! #IMPACTonAXSTV @Kimber_Lee90 pic.twitter.com/Lr0AJzX25C

This is a rematch from last week’s IMPACT! main event. In their first meeting, the returning Tenille Dashwood picked up the victory, albeit not without the help of some interference from her personal photographer, Kaleb With a K.

Jordynne is dominant in the early going as she hits a strong Irish whip into the corner turnbuckles. Tenille gains control with a neckbreaker on the ropes. Tenille targets the throat of Thicc Mama Pump as she puts in a series of illegal chokes. Jordynne turns the tide with multiple running strikes, followed by a splash for two. Jordynne is stuck in the Tree of Woe, allowing Tenille to charge into the corner with a crossbody. Kaleb once again gets on the apron, causing the distraction but lightning doesn’t strike twice as Jordynne counters into a submission, forcing Tenille to tap.

EC3 sends yet another cryptic message to Moose as he invites him to the funeral of the TNA World Heavyweight Championship next week on IMPACT!

“In death we pay homage to nostalgia and BURN IT DOWN.” @therealec3 is going to hold a funeral for the TNA World Championship next week. #IMPACTonAXSTV @TheMooseNation pic.twitter.com/WYbK0Cf0gS

Rich Swann gives us an inside look at his road to recovery as he prepares to challenge Eric Young for the IMPACT World Championship at Bound for Glory and according to Dr Ross, things are going extremely well.

.@GottaGetSwann has never worked harder than he has to prove his doubters wrong at Bound For Glory. #IMPACTonAXSTV pic.twitter.com/yY1m574Zoe

Reno Scum jump Rhino and Heath outside the arena and retrieve the roll of cash that they stole from Hernandez. It is revealed that Heath maxed out his credit card in order to pay for his latest TV spot that featured celebrity endorsements.

Rhino confronts Scott D’Amore and pressures him to make a tag team match pitting him and Heath vs Reno Scum. D’Amore reminds Rhino that Heath doesn’t work here but because of his persistence, he gives in and books an Unsanctioned match for this Saturday at Victory Road.

The Rascalz (Dez & Wentz) vs. The Good Brothers

As the stacked tag team division jockeys for position on the road to Bound for Glory, a win here could move either team closer to a coveted Tag Team Championship opportunity against the Motor City Machine Guns.

Gallows connects with a massive clothesline, turning Dez inside out. Gallows follows up with a delayed vertical suplex as he continues the beatdown on Dez. Anderson gets in on the action as the Good Brothers employ frequent tags during the wear-down process. The Rascalz create separation, allowing Wentz to tag into the match. Wentz hits a top rope double foot stomp but Anderson gets his knees up on the follow-up Hot Fire Flame. The Good Brothers connect with the Magic Killer on Dez to score the victory.

After the match, Anderson gets on the mic and calls out the Motor City Machine Guns, claiming that they are coming for the Tag Team Championships at the biggest event of the year, Bound for Glory.

There’s a standoff in the back between Brian Myers and Tommy Dreamer. The hardcore legend puts his hands on the Most Professional Wrestler. Myers persuades him to be professional, which leads to Dreamer challenging him to a match this Saturday at Victory Road.

It was a tense standoff between @THETOMMYDREAMER and @Myers_Wrestling – and they’ll face THIS SATURDAY at Victory Road! #IMPACTonAXSTV pic.twitter.com/GvPPC4yIan

Backstage, Kaleb With a K challenges Jordynne Grace to a rematch on the behalf of Tenille Dashwood for Victory Road. Jordynne happily accepts and Tenille is furious that he got her another match with Thicc Mama Pump.

.@TenilleDashwood will face @JordynneGrace one more time THIS SATURDAY at Victory Road to decide who is truly best. #IMPACTonAXSTV @kalebKonley pic.twitter.com/1ghVzaAJNq

The groomsmen and bridal party for the wedding of John E Bravo and Rosemary are at ringside for this match where the winner will officially become Bravo’s best man. Fallah was originally selected by Bravo but Swinger wants the spot for himself.

Fallah corners Swinger and pummels him with chops, then follows up with a back body drop. Swinger attempts to powerslam the big man but to no avail. Fallah hits a leg drop for two. Swinger stomps on the hand of Cody Deaner at ringside. Deaner gets up on the apron, inadvertently distracting the referee. Swinger uses Crazzy Steve’s monkey as a weapon to defeat Fallah and become Bravo’s best man.

After the match, John E Bravo gets on the mic and orders referee Brandon Tolle to restart the match after informing him that Swinger cheated.

Fallah sits on Swinger in the corner to pick up the quick win and retain his title of Bravo’s best man.

Gia Miller interviews X-Division Champion Rohit Raju. The reigning champion announces that the Defeat Rohit Challenge will begin this Saturday at Victory Road exclusively on IMPACT Plus. TJP interrupts and immediately accepts the challenge but Rohit denies him, saying that the opportunity is only open to competitors he hasn’t defeated before.

.@HakimZane is introducing the Defeat Rohit Challenge* THIS SATURDAY at Victory Road.

John E Bravo tells Fallah Bahh and Johnny Swinger that he honestly doesn’t care who his best man is – the only reason he started the match was because of the poor officiating.

Last week, a mystery attacker laid out Eddie Edwards on his way out of the arena. Eddie calls out Eric Young, with the belief that it was him. Instead, Sami Callihan makes his way to the top of the ramp. Callihan insists that it wasn’t him who attacked Eddie last week – but he knows who did. The lights go out and Ken Shamrock charges Eddie from behind. Shamrock locks in the Ankle Lock as Eddie screams in pain. What will the status of Eddie Edwards be when he challenges Eric Young for the World Title this Saturday at Victory Road?

Backstage, Eric Young says that he will not be held responsible for what he does to Eddie Edwards at Victory Road – instead it will be on his own hands and those of Scott D’Amore.

Susie is concerned that Kylie Rae will be angry with her if she wins the Knockouts Title at Victory Road. Kylie says she could never be mad at her and gifts her a pair of kick pads for her match with Deonna Purrazzo. Kylie tells Susie that her time has come, prompting a dark memory from the past.

Just like the Good Brothers did earlier tonight, both of these teams are seeking victory in hopes of securing a Tag Team Championship opportunity against the Motor City Machine Guns.

Fulton hits the ropes but Alexander catches him in the back with a knee. The North halt Fulton’s momentum by jumping him on the outside with a double team assault. Ace and Fulton continue their beatdown of Alexander inside the ring. The North build momentum with an impressive combination powerbomb. In an incredible feat of strength, Alexander gets the big man Fulton up for a German suplex. The pace quickens as Ace and Page tag in, leading to a springboard kick from Ace. The Inevitable one launches himself off the shoulders of Fulton, hitting an elevated splash on Alexander. Page throws Alexander into the legs of Fulton, allowing The North to isolate Ace and connect with The Northern Assault to win.

Post-match, the Good Brothers make their way to the ring where they stare down The North, both laying claim to the #1 contendership for the Tag Team titles. Ace and Fulton attack the Good Brothers from behind and The North join in on the assault. The reigning champs, the Motor City Machine Guns, charge the ring and an all-out brawl erupts.