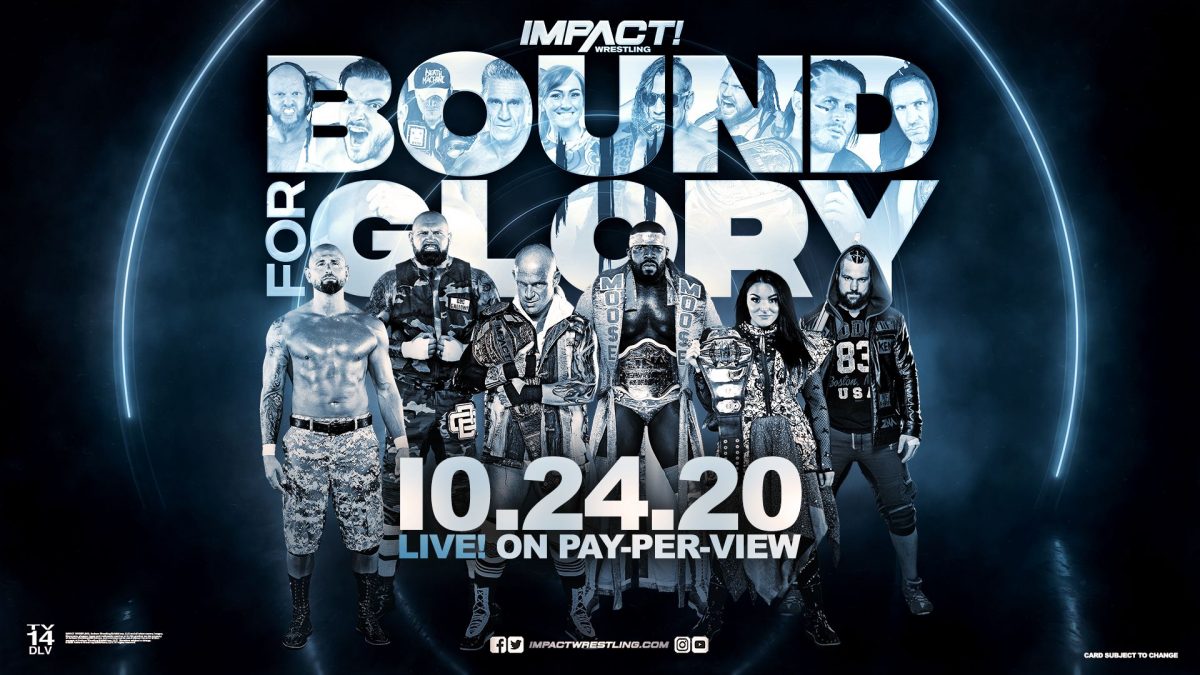 The legendary Bret Hart sends Ken Shamrock a congratulatory message ahead of his induction into the IMPACT Wrestling Hall of Fame later tonight on the LIVE Countdown to Glory pre-show.

Hardcore legend and former TNA World Heavyweight Champion Mick Foley is next to congratulate Ken Shamrock on his Hall of Fame induction.

The Rascalz (Dez & Wentz) vs. The Deaners 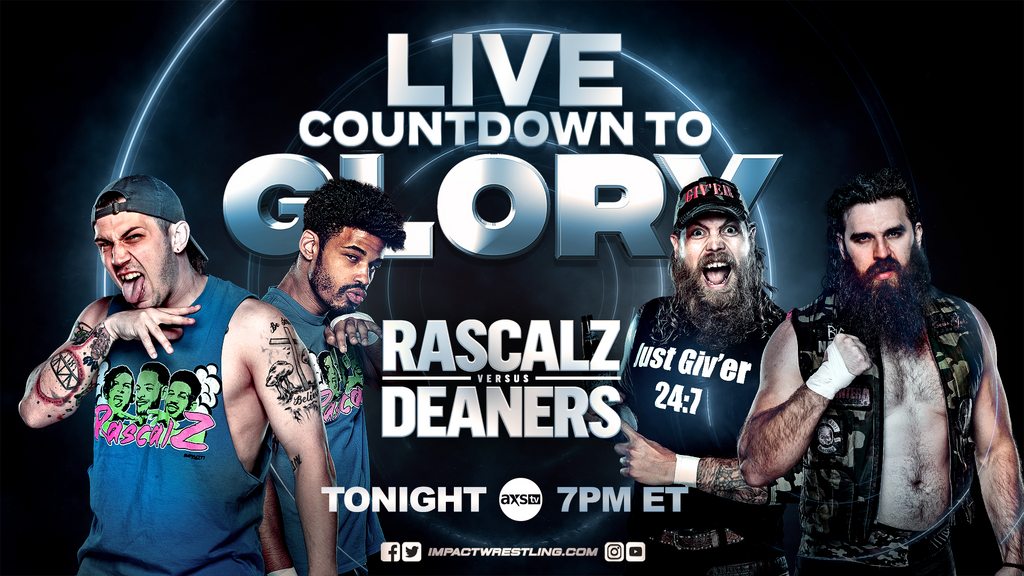 Cody is about to dive through the legs of his Cousin Jake but Wentz cuts him off. Wentz flies over the top, colliding with Jake on the floor. Jake takes both Rascalz off the top rope with a double powerbomb, followed by a huge splash from Cody.

The Deaners connect with a modified assisted sideslam on Dez to pick up the first victory on the biggest stage of the year.

The Rock inducts Ken Shamrock into the IMPACT Wrestling Hall of Fame!

Back in the IMPACT Zone, Matt Striker introduces Hall of Famer Ken Shamrock. The World’s Most Dangerous Man delivers a heartfelt speech, touching on his long history in professional wrestling. Before signing off, Shamrock thanks the most important people of all – the fans. 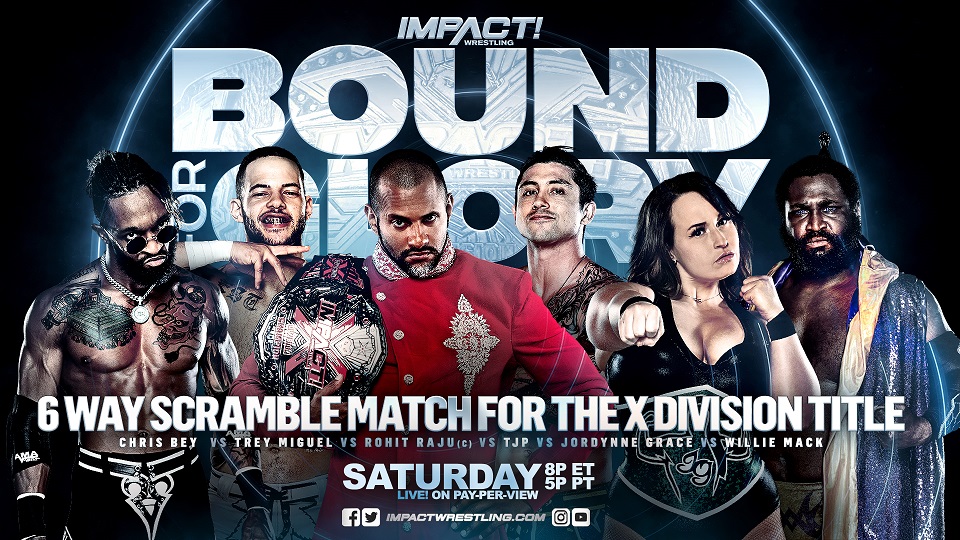 As soon as the bell rings, Rohit tries to retreat but his opponents stop him. The action is fast and furious in the early going as Grace takes down Willie with a shoulder tackle. TJP locks in simultaneous submissions on Willie, Trey and Bey! Willie sends the champ soaring across the ring with a flying forearm. Willie connects with a standing Moonsault on Rohit for two. Grace dives through the ropes, taking out TJP and Rohit on the outside. Bey dropkicks Trey off the shoulders of TJP, then dives to the outside with a huge crossbody! Rohit rolls up TJP with a hold of the tights but he’s somehow able to kick out at two. Upside down in the corner, Grace takes four of her opponents off the top in a modified Tower of Doom.

Rohit then hits her with a double foot stomp for a near fall. Grace its Trey with the Grace Driver but Rohit breaks the count. TJP connects with the Mamba Splash on Trey but Rohit capitalizes and steals the pin to retain the X-Division Title!

Backstage, John E Bravo, Rosemary and the larger-than-life wedding party prepare for the wedding of Bravo and Rosemary this Tuesday on IMPACT!

Call Your Shot Gauntlet Match
Acey Romero vs. Alisha Edwards vs. Cody Deaner vs. Brian Myers vs. Havok vs. Heath vs. Hernandez vs. Larry D vs. Rhino vs. Taya Valkyrie vs. Tenille Dashwood vs. Tommy Dreamer vs. Swoggle vs. James Storm 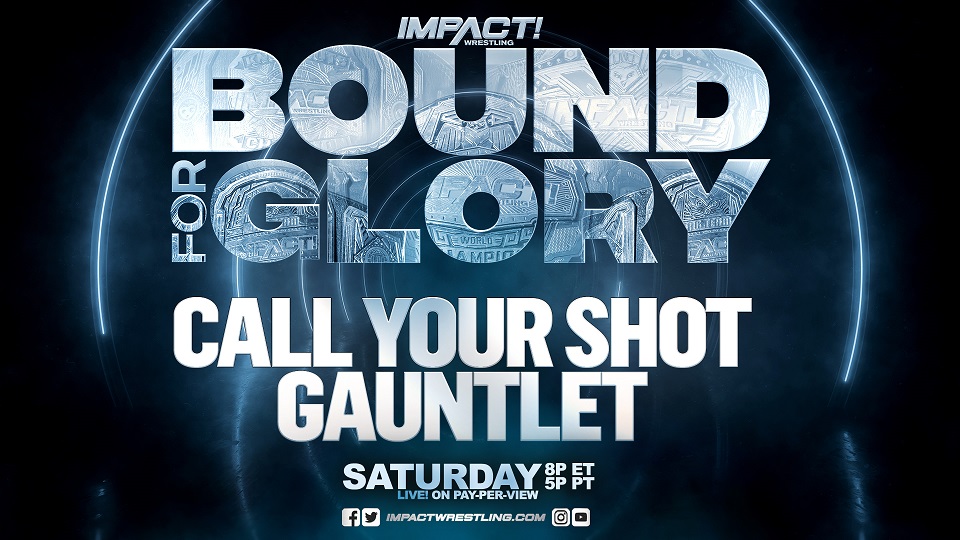 Two competitors start the match. Every minute, another will enter the fray. Eliminations occur by throwing your opponent over the top rope. This process will continue until there are only two competitors remaining. The final two will compete in a singles match to be won by pinfall or submission. The victor receives a future Championship opportunity of their choosing, anytime, anyplace!

Rhino and the returning Daivari kick off the match. Rhino’s career is on the line tonight. They brawl around the ringside area as the clock ticks down.

Larry D of XXL is the next entrant. Crazzy Steve enters the match. Acey Romero joins his XXXL partner. They immediately work together to sandwich Steve in the middle of the ring. Tenille Dashwood, alongside Kaleb with a K, is the next participant. Kaleb gets in the ring while Dashwood stays on the outside. The terrifying Havok is out next, accompanied by Nevaeh. Brian Myers enters the gauntlet. Myers throws Steve over the top for an elimination. Swoggle makes his return to IMPACT Wrestling as the next participant.

Myers uses Swoggle as a battering ram to eliminate Daivari. Myers reminds him that it’s every man for himself and eliminates Swoggle. Innovator of Violence Tommy Dreamer enters next. Alisha is the next participant in the gauntlet. Myers continues to dominate by eliminating Dreamer and Alisha. Kiera Hogan is the next participant. Myers takes a selfie with Dashwood but quickly eliminates her. Taya Valkyrie is out next, accompanied by Rosemary and John E Bravo. Fallah Bahh with his stolen roll of cash around his neck enters the match. Havok chokeslams Kiera for the elimination but she then gets eliminated by Taya. Cowboy James Storm makes his shocking return and eliminates Larry D.

Adam Thornstowe of Reno Scum is out next. Luster the Legend joins his partner. Heath, whose career is on the line tonight, comes out next. Heath clotheslines Acey over the top for the elimination, then follows up with the elimination of Myers. Sami Callihan is the next entrant. Hernandez is out in the final position and tries to reclaim his stolen roll of cash. Fallah throws it to the floor and eliminates himself to retrieve it. Rhino eliminates both members of Reno Scum.

Callihan, Storm, Heath and Rhino are the final four. Heath eliminates Storm. Callihan tosses Heath over the top rope and due to the stipulations, his IMPACT career is over unless Rhino can win the match.

Callihan and Rhino are the final two. They will now compete in a traditional singles match. Callihan connects with a Piledriver for a near fall. Rhino hits the Gore to score the victory, winning the Call Your Shot Gauntlet. With the win, Rhino retains not only his IMPACT career, but also keeps Heath’s potential future with IMPACT alive. 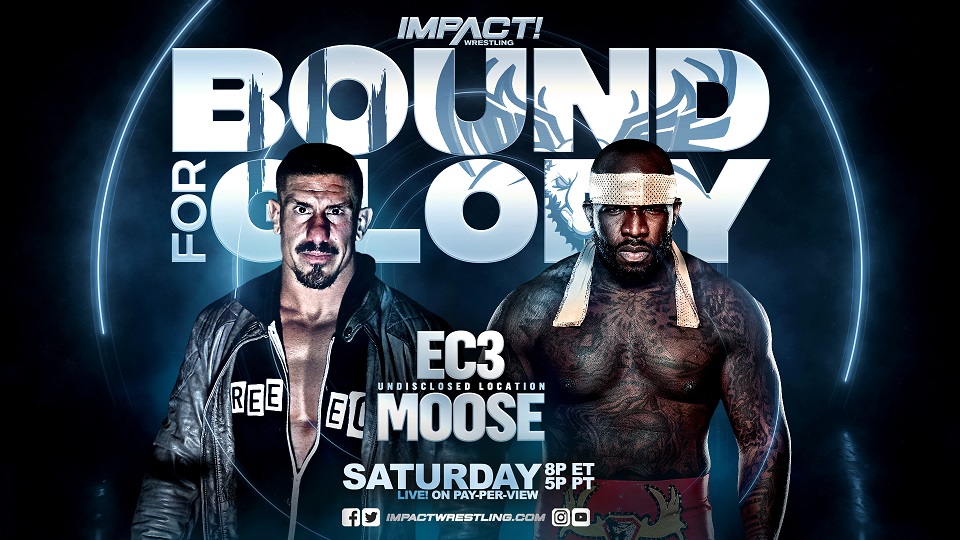 They brawl in the middle of a ring as Moose delivers stiff shots to EC3. Moose questions why EC3 has has been tormenting him. When EC3 doesn’t respond, Moose says he’s going to beat the answers out of him. EC3 turns the tide and hits a big Exploder Suplex.

EC3 tells Moose he’s nothing as he sets up for the One Percenter. Moose counters and connects with the No Jackhammer Needed spear. EC3 tells Moose to control his narrative. Moose utters the words “thank you” before hitting him over the head with the TNA World Heavyweight Championship. Moose leaves as EC3’s followers carry him out of the ring. 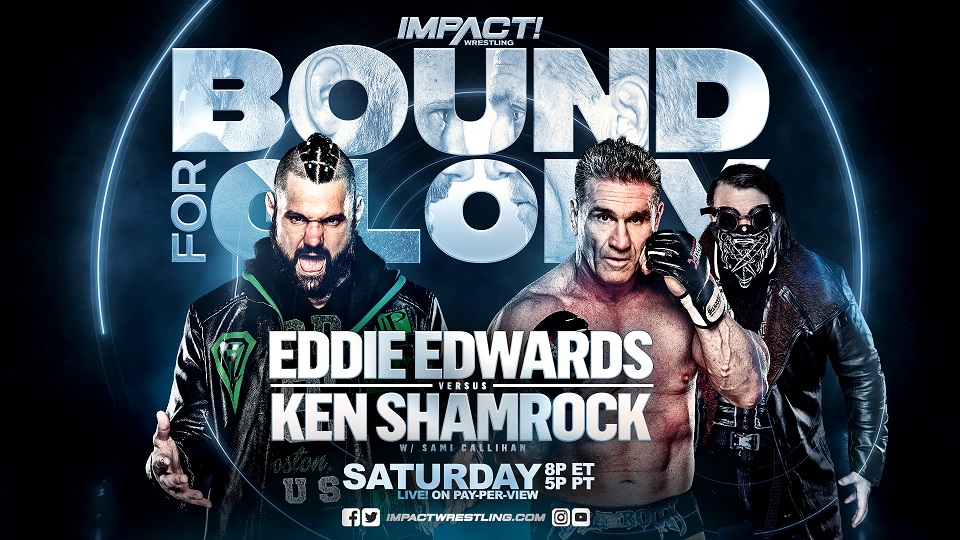 Shamrock begins to wear Eddie down in the early going. Shamrock kicks him to the floor, and delivers a thunderous kick to the back. Shamrock drives Eddie’s head into the steel guardrail with a knee strike. Eddie finally creates separation with a Blue Thunder Bomb, followed by a modified Dragon Screw Leg Whip. Eddie continues to build momentum with a dive to the floor, taking out both Shamrock and Callihan.

Back in the ring, Eddie hits a top rope missile dropkick for two. Eddie’s next move is a Tiger Bomb but Shamrock counters into a Cross Armbreaker. Eddie hits the Boston Knee Party but instead of going for the pin, he locks in the Boston Crab. Callihan uses his cellphone to turn out the lights. When they come back on, Callihan is holding a baseball bat. Eddie fights him off with a kendo stick! Shamrock capitalizes off the distraction with a belly-to-belly suplex from behind. Shamrock locks in the Ankle Lock to win by submission.

.@TheEddieEdwards takes out @TheSamiCallihan and @ShamrockKen with a dive! #BFG2020 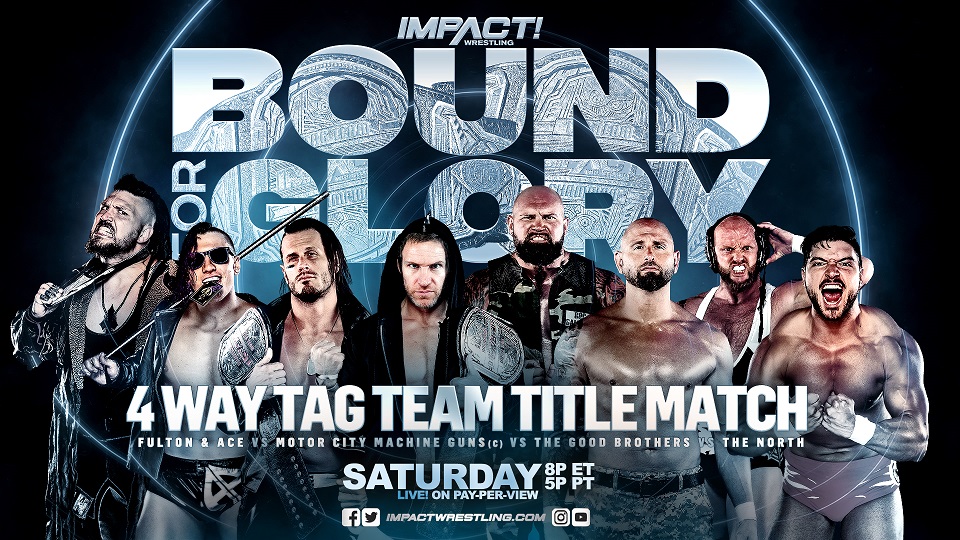 The North jumpstart the match as they blindside the Motor City Machine Guns during their entrance. Alexander hits Shelley with a vicious Piledriver on the steel ramp, effectively eliminating him from the match.

The match officially begins with Chris Sabin competing alone. You can tag anyone into the match, and two competitors are legal at any given time. The first person to score a pinfall or submission will win the match for their team. Fulton wears down Sabin, connecting with a strong Irish whip into the corner. Sabin fights off both Ace and Fulton with a tornado DDT, allowing him to make the tag to Karl Anderson! The Good Brothers hit a double team back suplex on Ace but Fulton breaks the pin attempt. Gallows clotheslines Fulton over the top rope to the floor. The courageous Chris Sabin tags himself into the match and soars over the top rope to the floor.

Anderson counters a top rope crossbody from Sabin into a pinning predicament for two. Alexander counters the Magic Killer from The Good Brothers. Page hits Anderson over the head with the belt, allowing Alexander to score the pin. The North are the new Tag Team Champions! 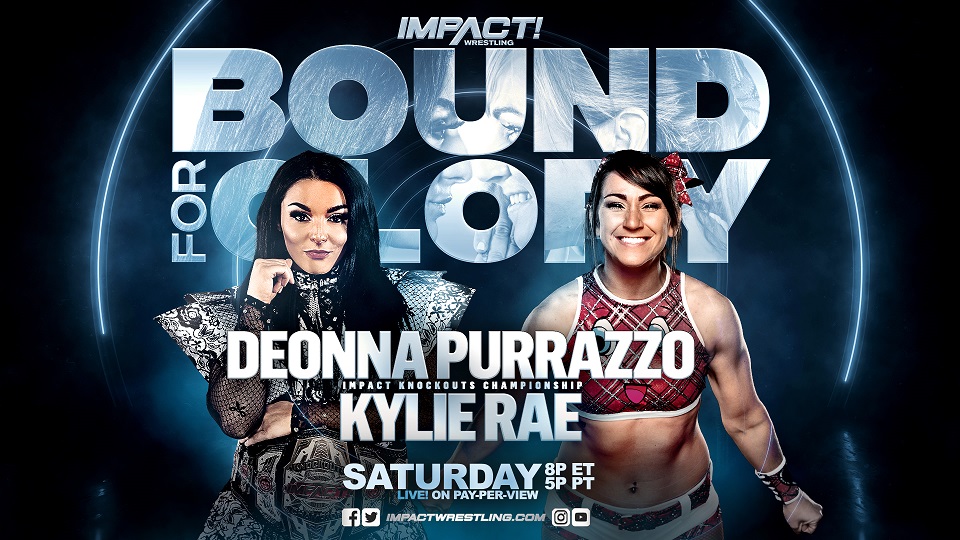 Kylie Rae’s music hits but she’s nowhere to be seen. Deonna Purrazzo gets on the mic and says she’s not surprised Kylie didn’t show up tonight. Deonna says she promised a Knockouts Title defense tonight and that’s what we’re going to get before laying out an open challenge. The demonic Su Yung makes her terrifying return and answers Purrazzo’s challenge for the Knockouts Championship!

Su hits a twisting backbreaker on the apron in the opening moments of the match. Su chases Kim around the ring, allowing Purrazzo to gain control. Back in the ring, Su picks her off the top with a head scissors. Purrazzo a trifecta of German Suplexes before exchanging strikes with the Undead Bride in the middle of the ring.

Su launches herself off the apron, crashing into the champion on the floor. Su connects with the Pedigree for a very close near fall. Su puts on the bloody glove, leading to a flurry that takes out the referee. Su has Purrazzo pinned for three but the referee is out. From behind, Kim hits Su in the back with a steel chair. They try to break her arm like they did to Susie but Su fights out of it. Su takes out Kim with the poison mist. Su hits the Panic Switch to defeat Purrazzo and become the new Knockouts Champion!

BREAKING: You’ve asked for it – the Knockouts Tag Team Titles are BACK!

The new champions will be crowned on January 16th at #HardToKill! #BFG2020 pic.twitter.com/mgzhVw7Fnd 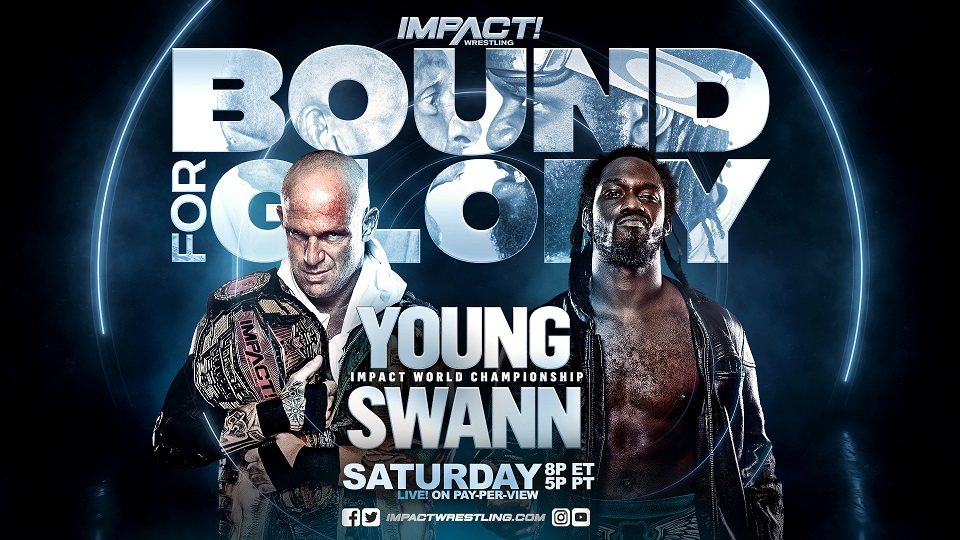 Swann is as determined as ever to get revenge on Young as he goes on the attack at the opening bell. Swann quickens the pace and hits the champ with a furry of offense.

Swann attempts a handspring but Young counters and drives his head into the mat. The concern now shifts from Swann’s previously injured knee to his neck. The beatdown continues as he relentlessly attacks the neck of Swann. Young hits a thunderous neckbreaker off the top rope.

Swann picks him off the second rope, then follows up with a huge Frog Splash for two. Young bites the face of Swann, followed by a top rope elbow drop right into the neck of Swann. Swann builds momentum with a handspring cutter, followed by the Phoenix Splash to win the match and become the new IMPACT World Champion!

After the match, the locker room empties to celebrate with the new World Champion, Rich Swann. Bound For Glory goes off the air.