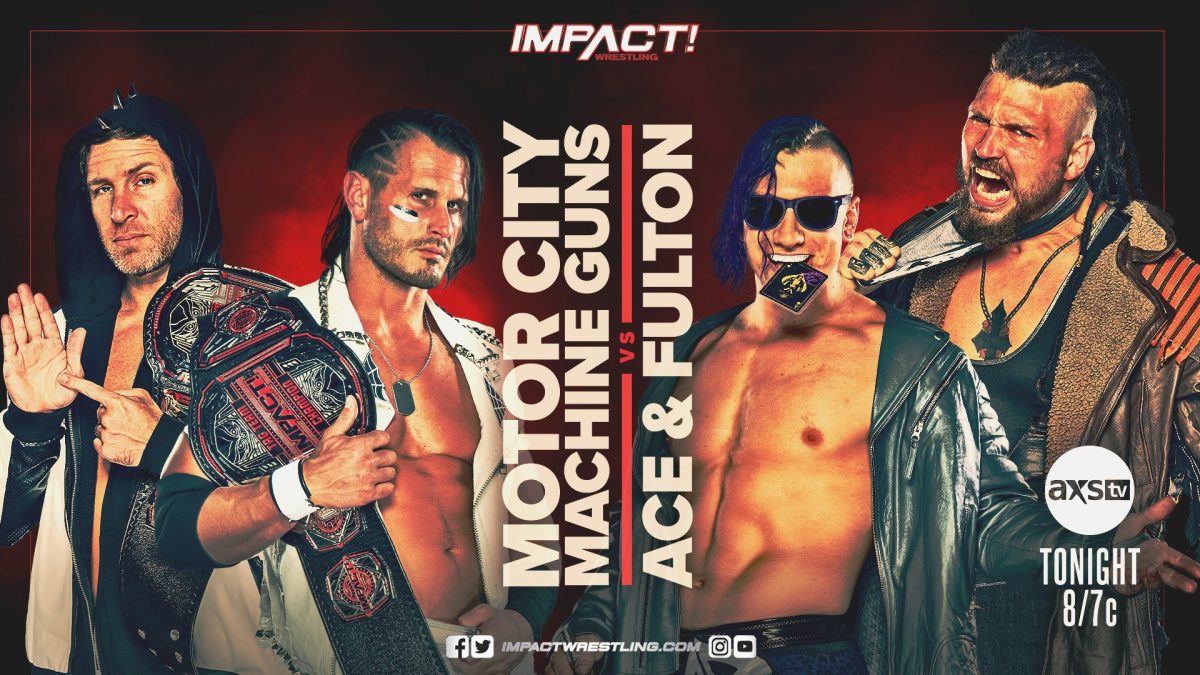 This is a rematch from last Saturday’s Victory Road on IMPACT Plus where Myers picked up the victory. The fight spills to the outside in the early going as Dreamer looks to show Myers why he is the innovator of violence. Dreamer drives Myers in the steel steps. Back in the ring, Myers trips up Dreamer and connects with a back suplex. Myers wears down Dreamer, halting any momentum he tries to build. Dreamer creates separation with an explosive powerslam out of the corner. Dreamer hits a cutter but can’t capitalize with a quick pin, resulting in a two count. Myers comes back with a sit-out scoop slam for a near fall of his own. Myers hits his signature DDT but Dreamer somehow kicks out. Myers swings and misses with a kendo stick. Dreamer is about to use it but Myers pleads with him not to. Dreamer shows compassion but Myers makes him pay for it, delivering a thumb to the eye before cracking him over the head with the kendo stick.

Moose continues his search for the TNA World Heavyweight Championship mere moments before its funeral.

John E. Bravo tells the wedding party to start raising money to pay for his wedding with Rosemary. The best man Fallah Bahh volunteers for the responsibility. Meanwhile, The Deaners get into an argument with Johnny Swinger and Crazzy Steve.

Rohit Raju is in the ring for the second Defeat Rohit Challenge. At Victory Road, Rohit defeated Willie Mack in the open challenge, however, it appeared as though he got himself intentionally counted out in order to retain the X-Division Title. Willie’s music hits and he wants another shot but Rohit reminds him that the challenge is only open to those who he has not already defended the Championship against. Instead, Jordynne Grace answers the call and the second Defeat Rohit Challenge is on.

Willie Mack grabs the title out of Rohit’s hands from ringside. Grace capitalizes off the distraction and rolls up Rohit for the shocking three count.

After the match, Rohit convinces the referee that because he did not raise the X-Division Championship above his head prior to the start of the match, the title was not officially on the line. The referee awards the match to Grace but returns the title back to Rohit.

As Rohit walks back through the curtain, he’s confronted by Scott D’Amore who announces that due to his actions of late, Rohit will be defending the X-Division Title against Jordynne Grace, Willie Mack, TJP, Chris Bey and Trey Miguel in a 6-Way Scramble match at Bound for Glory.

Fallah Bahh challenges Hernandez to an arm wrestling contest in an attempt to raise money for John E Bravo and Rosemary’s wedding. He spills his drink on Hernandez but it’s all part of the plan.

Is an arm wrestling match with @SuperMexCTM the plan for @FALLAH1 to get the wedding money? #IMPACTonAXSTV pic.twitter.com/88TkovfKuK

The Rascalz defeated XXXL at Victory Road this past Saturday but can they do it again? XXXL jumpstart the match by attacking Dez and Wentz before the bell. XXXL send Dez flying with a thunderous double team powerbomb. Larry continues the beatdown with a big boot to Dez. The pace quickens when Wentz makes the tag and hits a running shooting star on Larry. Wentz takes Acey off the apron. Acey gets involved illegally but takes out his own partner with a clothesline. The Rascalz hit Hot Fire Flame on Larry to win.

Fallah Bahh sneaks into the bathroom while Hernandez is taking a shower and steals his rolls of cash in order to fund John E Bravo’s wedding.

Dr. Forman ensures Jimmy Jacobs that Rich Swann is medically cleared and ready to challenge Eric Young for the World Title at Bound for Glory. Out of nowhere, Eric Young who is disguised as an employee of the institute, blindsides Swann and attempts to reinjure his knee.

The Good Brothers interrupt the Motor City Machine Guns during an interview with Gia Miller as they prepare for the huge 4-way Tag Team Championship match at Bound for Glory.

Taya is fired up from the opening bell as she delivers double running knees to Kiera in the corner. Taya throws Kiera into an Exploder suplex from Rosemary. Tasha makes the tag but she too gets caught with an Exploder suplex from the Demon Assassin. Rosemary charges at Kiera but the Hottest Flame trips her up, sending her crashing into the turnbuckle. There’s a switch in momentum as it’s now Kiera and Tasha who begin to wear down Rosemary. Havok and Nevaeh are seen watching the match on a monitor backstage. Taya connects with a Blue Thunder Bomb on Kiera, then plants her into the mat with a kick. Rosemary hits a double underhook sit out slam to put Tasha away.

Johnny Swinger tags himself in after the Deaners persuade Steve to have his money take part in a chugging contest. As Swinger continues to take Steve under his wing and teach him the ways, Steve isn’t following his guidelines. Cody capitalizes off the miscommunication with an Atomic Drop. Swinger wants to use the monkey as a weapon but Steve doesn’t let him. Cody hits Swinger with a big DDT to win.

Josh Mathews and Madison Rayne confirms that Deonna Purrazzo broke Susie’s arm in a post-match attack at Victory Road last Saturday. Gia Miller interviews Kylie Rae, who is distraught by the situation. Kimber Lee interrupts but we see a new side of the not-so-Smiley Kylie as she delivers a brutal beatdown on the Crown Jewel.

After Heath and Rhino defeated Reno Scum in an Unsanctioned match at Victory Road, Scott D’Amore sits down with Heath to finally discuss giving him a spot on the IMPACT Wrestling roster. Heath hands him a written proposal but Scott rolls up his sleeve’s for a negotiation. Scott says that Heath has to prove himself before he agrees to a contract like that. Tensions quickly rise, leading to Scott throwing away Heath’s proposal and storming out of the room. In the hall, Heath is angry at his friend Rhino for telling him that the grass is greener on the other side.

At the funeral, EC3 drops the TNA World Heavyweight Championship off a bridge and into a body of water, prompting Moose to free himself.

Ken Shamrock feels remorse for his attack on Eddie Edwards last week but Sami Callihan snaps him out of it and instructs him to attack an innocent bystander.

With @TheSamiCallihan calling the shots, @ShamrockKen may be more dangerous than ever. #IMPACTonAXSTV pic.twitter.com/ofFITubgCf

Both of these teams are looking to build momentum ahead of the huge 4-way Tag Team Championship match at Bound for Glory. The early stages of the match are controlled by the Guns as they dominate Ace. Minutes later, Fulton tags himself in and chaos ensues and he sends Shelley headfirst into the turnbuckle. Shelley attempts to fight free but Fulton fights him off with a backbreaker, followed by a springboard leg drop from Ace. There’s miscommunication as Ace inadvertently collides with Fulton. This opens the door for Shelley to make the tag to Sabin. The Guns hit an impressive double team chokeslam suplex to get the giant Fulton off his feet. All hell breaks loose as The Good Brothers stop The North from getting involved with steel chairs. Inside the ring, the Guns put Fulton away with The Dirt Bomb.