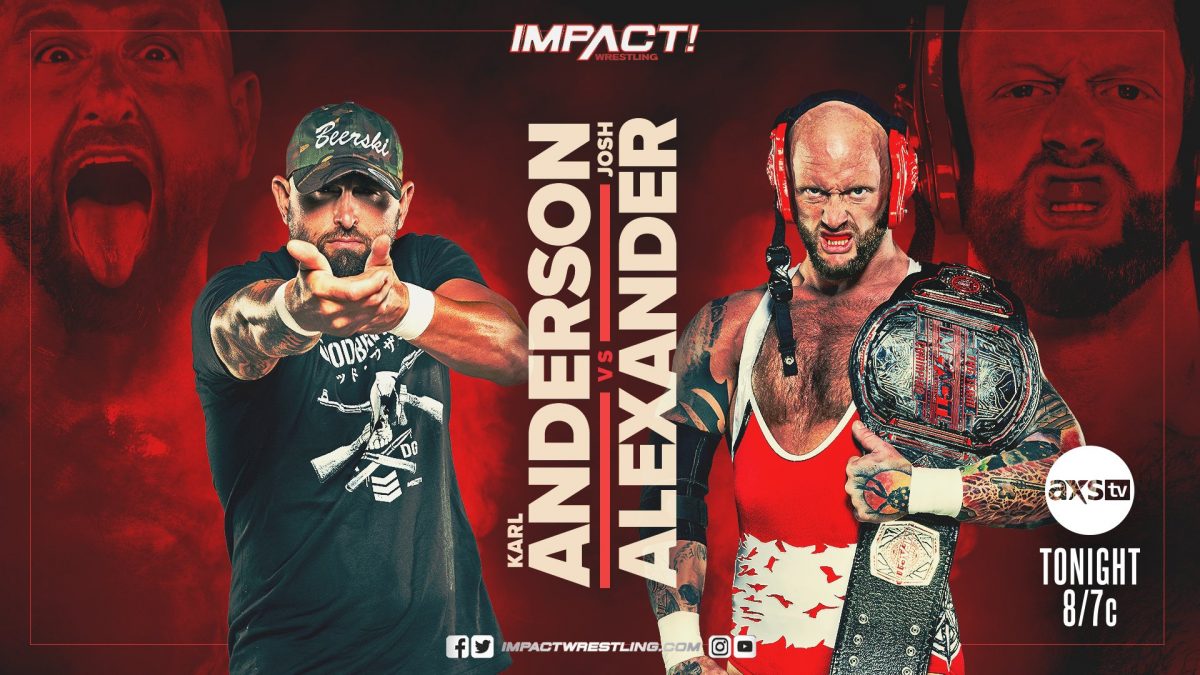 Just one week away from the start of the tournament to crown new Knockouts Tag Team Champions, these teams compete in one final tune-up! This is Tenille Dashwood and Madison Rayne’s first time teaming up – will they be able to find their chemistry? Madison returns to the ring as she kicks things off against Nevaeh. Tenille hits Havok with her signature crossbody in the corner. Tenille tags out to Madison but she claims she’s not ready. Havok drags her in the ring, allowing Nevaeh to follow up with a big clothesline. Madison attempts CrossRayne but Havok counters into a Tombstone Piledriver for three!

Gia Miller catches up with The Good Brothers as they prepare to challenge The North for the Tag Team Championships this Saturday at Turning Point. But first, Karl Anderson must battle Josh Alexander in singles action later tonight. The Good Brothers continue to make fun of Ethan Page’s alter ego, the Karate Man. Ethan Page interrupts and slaps Anderson across the face!

Tommy Dreamer tells Larry D that he’s a suspect in the shooting of John E Bravo because he was the reason Larry was eliminated from the Call Your Shot Gauntlet at Bound For Glory. Dreamer conducts a deception test but it comes back negative. The next suspect is Cody Deaner who is bitter about his loss to Johnny Swinger last week. Dreamer recalls the time when Deaner uttered the words “I want to kill that guy” in reference to John E Bravo. Deaner denies the claims as the investigation continues.

TJP jumpstarts the match with a dropkick under the ropes, catching Rohit off-guard during his entrance. TJP follows up with a vertical suplex on the stage. Rohit uses the referee as a shield, allowing him to capitalize off the distraction with a series of kicks. Rohit remains in control as he continues to wear down TJP. The challenger creates separation with an explosive tornado DDT out of the corner. TJP builds momentum with a springboard strike! TJP is hanging in the tree of woe but uses incredible strength to take Rohit off the top rope. Rohit avoids the Mamba Splash but TJP locks in a knee bar instead. Rohit tries to use the X-Division Title as a weapon but the referee pries it out of his hands. Rohit connects with a low blow behind the referees back, followed by a running knee to win!

With that result, TJP can no longer challenge for the X-Division Title as long as Rohit Raju is champion.

Fallah is next in line to be questioned by Tommy Dreamer. Hernandez tells Fallah Bahh that he thinks he shot John E Bravo. Kiera Hogan and Tasha Steelz come to his aid but it turns out to be a distraction so that they can steal his roll of cash!

The Rascalz are being evicted from the Treehouse for not paying their rent. They announce that next week, they’ll be leaving IMPACT Wrestling.

Sabin takes to the ring alone tonight as Alex Shelley recovers from injury that XXXL reaggravated in an attack just a few weeks ago. Acey distracts the referee while Larry delivers a closed fist from ringside. Acey is in total control when Sabin tries to bite his way out of a submission, but to no avail. Acey hits a huge powerslam but Sabin avoids the follow-up elbow drop. Sabin quickens the pace with a double crossbody to both members of XXXL on the floor! Sabin gets the big man off his feet with a series of running kicks to win!

After the match, Larry D attacks Chris Sabin from behind. Acey Romero joins in for the two-on-one beatdown.

Sami Callihan approaches Chris Bey and lets him in on his secret plan for tonight. Chris Bey is set to battle Callihan’s rival, Eddie Edwards.

Is a colab between @DashingChrisBey and @TheSamiCallihan brewing? #IMPACTonAXSTV pic.twitter.com/cabzB7Roio

Father James Mitchell understands why Tommy Dreamer believes that he may the culprit in the shooting of John E Bravo but ultimately denies the claims. Dreamer wants to believe him but the lie detector is reading high levels of deception! Mitchell says that he didn’t shoot Bravo – but he thinks he knows who did.

The action is fast and furious from the opening bell as Eddie and Bey exchange athletic offense. Eddie hits an overhead belly-to-belly suplex for the early two count. Bey turns the tide with a spinning heel kick. Eddie attempts the Tiger Driver but Bey counters with a Hurricanrana. Eddie avoids the springboard cutter and gets Bey in a pinning predicament to win.

Post-match, Chris Bey grabs a steel chair but it’s just a distraction so that the ICU hacker Sami Callihan can make his presence felt! Callihan attacks Eddie Edwards with his baseball bat until World Champion Rich Swann makes the save. The odds are even for a moment but quickly fall back in the favor of Callihan when Ken Shamrock blindsides Swann. Bey capitalizes with chair shots to the back of Eddie and Swann. Callihan tries to end Swann’s career but the Rascalz clear the ring!

After her partnership with Madison Rayne didn’t go according to plan, Tenille Dashwood asks Jordynne Grace to be her partner in the Knockouts Tag Title Tournament after initially turning her down. Grace says that Tenille needs to earn her trust – and she can do just that in a tag team match this Saturday at Turning Point.

Rich Swann wants to do something special for the Rascalz before they leave IMPACT Wrestling next week. He proposes a tag team match, pitting him and Trey vs Dez and Wentz next week! The Rascalz accept and it’s official.

Next week is The Rascalz’ final week on IMPACT and they’re going out with a BANG – it’ll be @DezmondXavier and @zachary_wentz vs. @GottaGetSwann and @TheTreyMiguel! #IMPACTonAXSTV pic.twitter.com/ewQ69XA5Py

Gia Miller interviews Deonna Purrazzo and Kimber Lee ahead of Purrazzo’s No Disqualification Knockouts Championship rematch against Su Yung at Turning Point. Purrazzo says this is uncharted territory as she’s never been in a No DQ match before. Kimber Lee disappears from the set. As the Virtuosa searches for her, she’s met with a terrifying sight and a horrific message from the Knockouts Champion, Su Yung! It appears as though Purrazzo is on her own for Turning Point.

Tommy Dreamer questions Havok. Dreamer believes that Havok has motive for shooting Bravo – after all, Rosemary made her reincarnate her arch enemy Father James Mitchell to officiate the ceremony.

Fallah hits Luster with a running crossbody in the early going. Luster sends Steve hard into the corner turnbuckle, followed by a standing Moonsault from Thornstowe. Steve is taken to pity city by Thornstowe but only angers Steve, who bites him in return! Steve tags in Fallah and the big man goes on the attack. Luster catches Steve on the outside and drives him back-first into the steel post. Thornstowe connects with a top rope double foot stomp on Fallah to win.

Chris Sabin asks fellow tag team veteran and recently returned James Storm to be his partner against XXXL this Saturday at Turning Point!

Dr Forman informs Willie Mack that even though he has a bruised larynx, he’s still cleared to face Moose this Saturday at Turning Point. Moose adds insult to injury as he delivers yet another blindside attack to Chocolate Thunder. This time, Willie sees it coming and turns the tide before Moose can do any more damage!

Who will gain momentum heading into the huge Tag Team Championship clash between The North and The Good Brothers this Saturday at Turning Point? Alexander takes the fight to the outside as he rakes the face of Anderson on the floor. Back in the ring, Alexander continues to wear down Anderson. Alexander connects with a thunderous back suplex for two. Anderson begins to build momentum with a powerful Spinebuster. Alexander comes back with a big boot for a near fall. Alexander fights off the Gun Stun as Page hooks Anderson’s leg from the outside. Anderson steps on the hand on Page and all hell breaks loose! Page attacks Anderson as the referee calls for the bell.

Doc Gallows gets involved and a huge brawl breaks out. Security comes down to the ring in an effort to break things up. IMPACT! goes off the air as the fight continues!