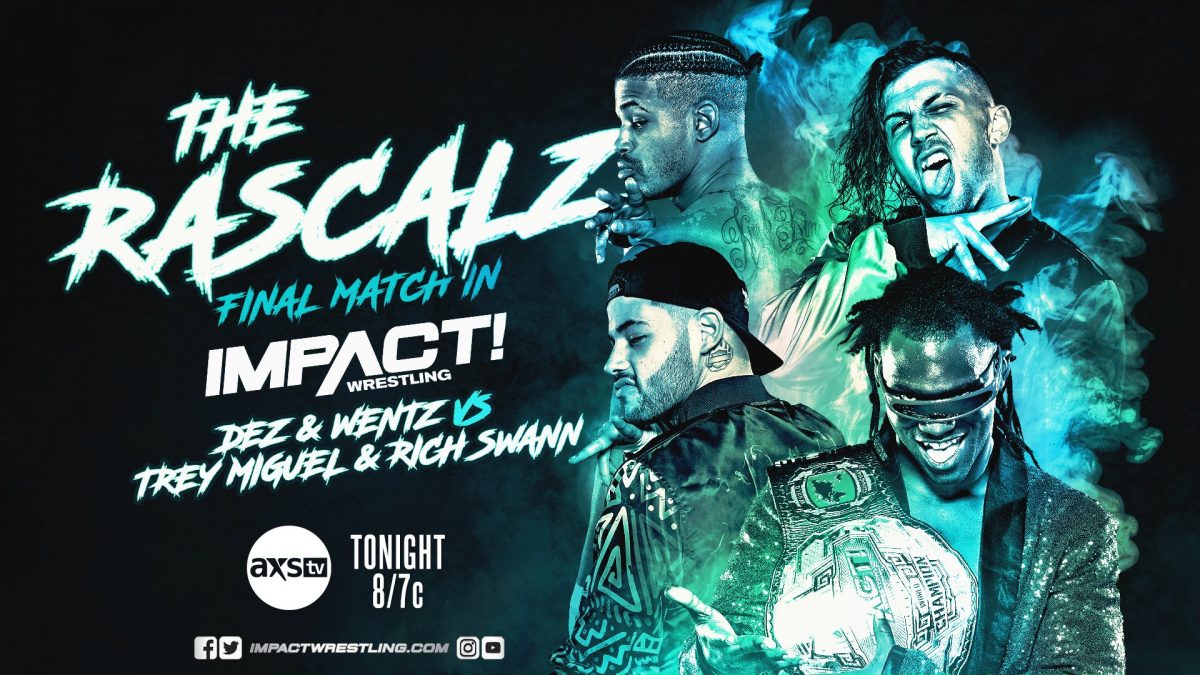 At Turning Point, Moose got himself disqualified with a brutal post-match attack on Willie Mack that forced the referee to reverse his decision after Moose won the match! Now these two athletic giants collide in a match with no disqualifications! Moose sends Willie over the guardrail and a loud thud is heard throughout the arena when his back meets the concrete. Moose continues to call out Rich Swann as he looks to send a message to the reigning World Champion. Back in the ring, Moose remains in control with a dropkick, followed by a strong Irish whip. Moose charges into the corner but Willie avoids him to create a window of opportunity. Willie fights back with a series of strikes. Willie connects with the standing Moonsault for two. Willie crashes and burns on the Six Star Frog Splash but connects with the Stunner. Moose comes right back with the Lights Out spear! Moose delivers repeated elbows until the referee calls for the bell.

After the bell, Moose continues his heinous assault once again.

The Rascalz reminisce about the good times they had in the Treehouse over the years. Later tonight, they wrestle their final match in IMPACT Wrestling when Dez and Wentz battle Trey Miguel and Rich Swann.

We head to The Treehouse for one final trip down memory lane with The Rascalz. #IMPACTonAXSTV @DezmondXavier @zachary_wentz @TheTreyMiguel pic.twitter.com/rHq40qazYA

The Deaners inform Tommy Dreamer of a clue in the investigation of who shot John E Bravo. At Turning Point, they found a gun in the fanny pack of Johnny Swinger!

The Masked Marvel returns to the ring as he battles IMPACT newcomer Gio. The match is just getting underway when Eric Young and the recently debuted Joe Doering make their presence felt!

Doering annihilates both Suicide and Gio, laying them out with an impressive flurry of offense. Eric Young gets on the mic and reminds the world that “this world doesn’t belong to them, it belongs to us.”

Gia Miller interviews new Knockouts Champion Deonna Purrazzo after she regained the title in a No Disqualification match vs Su Yung at Turning Point. Kimber Lee joins her and says now that they’re done with Su, they’re turning their attention to the Knockouts Tag Title Tournament. Su sends a terrifying message written in blood as Deonna and Lee look on in horror.

Rhino confronts Eric Young and Joe Doering in the backstage area and says whatever they have planned, it’s not going to happen around here. Young and Doering take out Rhino before trapping his friend Heath in a room!

At Turning Point, Crazzy Steve came to the aid of Swoggle after Brian Myers was looking to add insult to injury after their match. Steve hits a Hurricanrana in the early going. Myers turns the tide by driving him back-first into the steel ring post! Myers is firmly in control as he wears Steve down with a Sleeper. Steve builds momentum with a rolling senton in the corner, followed by a side Russian legsweep. Myers targets the eye of Steve, then capitalizes with his signature clothesline to score the victory.

The Knockouts Tag Team Title Tournament begins as the odd-couple pairing of Tenille Dashwood and Alisha battle the longtime devastating duo of Havok and Nevaeh! Tenille and Alisha display great teamwork in the early going as they deliver a double vertical suplex to Nevaeh. Tenille adds insult to injury with the Dashwoogie, followed by the low crossbody in the corner. Alisha hits Havok with a wheel barrel Flatliner but Havok comes right back with a thunderous swinging slam! Alisha takes a page of out Tenille’s playbook with a low crossbody of her own to Havok! Tenille saves Alisha from the Tombstone Piledriver. Tenille avoids a clothesline by throwing Alisha into it as she retreats to safety. Havok and Nevaeh put Alisha away with an impressive double team finisher to advance.

Jordynne Grace is on the phone with her partner for the Knockouts Tag Team Title Tournament. We will find out who it is next week on IMPACT!

Who has @JordynneGrace found to be her tag team partner?! #IMPACTonAXSTV pic.twitter.com/hFYhbmGwOl

The long feud over Hernandez’ stolen roll of cash reaches its conclusion tonight! Hernandez charges right at the opening bell and takes control with a slingshot shoulder block. Hernandez soars through the air with a massive dive over the top rope to the floor! Fallah builds up some speed with a running strike in the corner, followed by a Samoan Drop for two. Fallah attempts another one but Hernandez fights out and hits a top rope splash to win.

Executive Vice President Scott D’Amore tells TJP that he was pulling for him in his last chance match vs Rohit Raju for the X-Division Championship. D’Amore suggests that nobody by the name of TJP can challenge Rohit again as long as he’s champion – but if there were someone with a different name, then they would be completely eligible.

It was tough luck for @MegaTJP against @HakimZane last week.

If only there were somebody named something other than TJP who could challenge for the X-Division Championship… #IMPACTonAXSTV @ScottDAmore pic.twitter.com/jrwrNf0zuA

Ethan Page interrupts a conversation between new Tag Team Champions The Good Brothers and Scott D’Amore. Page requests a rematch but Anderson says that he has to go through a “phenomenal” opponent first.

After being evicted from the Treehouse, the Rascalz wrestle their final match in IMPACT Wrestling tonight. Wentz squares off with Trey as they start things off in a stalemate. Dez and Swann are next to compete as Swann takes control with a spin kick. Wentz hits Trey with a Bronco Buster in the corner. Trey connects with the colorful combination to his fellow Rascalz, Dez and Wentz. Swann hits a standing Shooting Star on Wentz but Dez breaks up the pin attempt. All four men exchange strikes in the middle of the ring as everyone gets taken out with superkicks! Dez and Wentz hit Hot Fire Flame on Swann but this time its Trey who breaks the pin! Trey flies off the top with double knees to Dez. Swann capitalizes with a superkick to Dez for the win.

After the match, the Rascalz embrace and leave their jackets in the ring as their time in IMPACT Wrestling has come to an end. When the Rascalz step through the curtain, Rich Swann greets them and they hug one final time. Out of nowhere, they’re brutally attacked by Sami Callihan and Ken Shamrock. Shamrock delivers a knockout shot to Swann in advance of their World Title match next week.