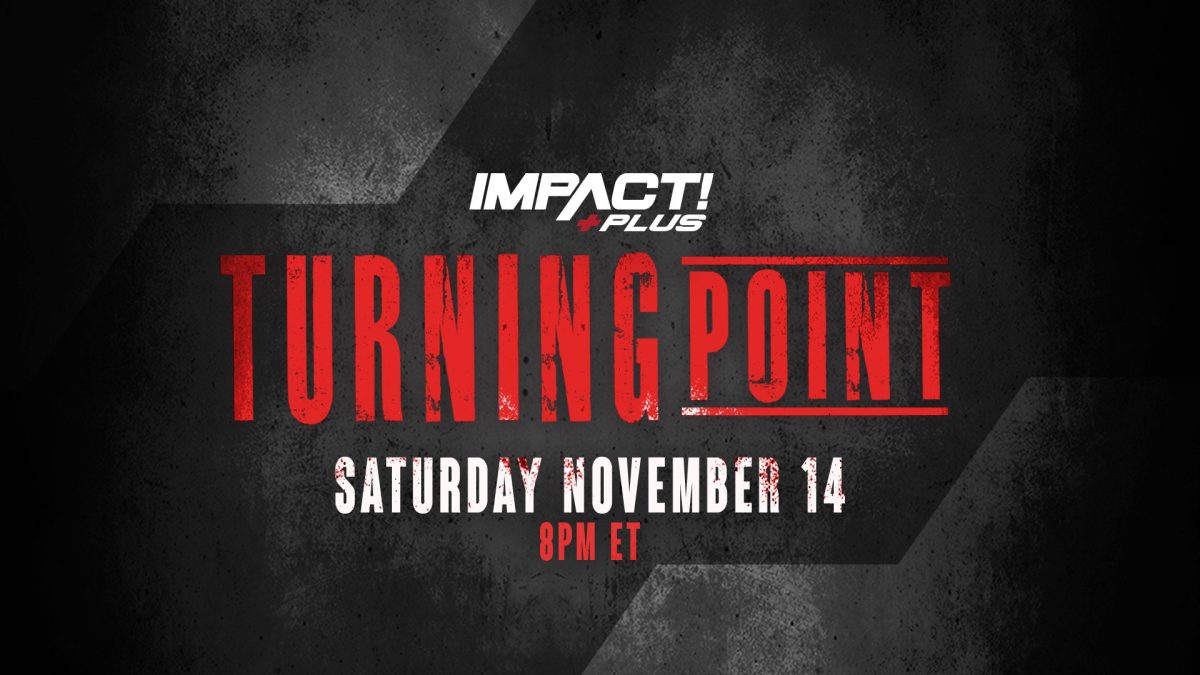 This show aired on Impact’s streaming service, Impact PLUS.

Daivari made his shocking return in the Call Your Shot Gauntlet at Bound For Glory. Tonight, he goes one-on-one with former World Champion Eddie Edwards! Daivari hits a jawbreaker but Eddie comes right back with a belly-to-belly suplex. Daivari sends Eddie crashing into the steel ring post, allowing him to gain control. Daivari begins to wear Eddie down, halting his attempts to build any sort of momentum. Eddie finally turns the tide with a Backpack Stunner for two. Daivari takes Eddie off the top with a Frankensteiner for a near fall.

Both men exchange strong strikes in the middle of the ring, followed by a Tiger Driver from Eddie. Daivari tries to steal the win with his feet on the ropes but gets caught by the referee! Eddie capitalizes with the Boston Knee Party to score the victory!

Tenille Dashwood and Jordynne Grace try to find their chemistry ahead of the tournament to crown new Knockouts Tag Team Champions, beginning this Tuesday on IMPACT! Meanwhile, Taya Valkyrie and Rosemary are two of the suspects in the shooting of John E Bravo! Tenille is more focused on Kaleb taking photos of her from ringside, allowing Rosemary to take control in the early going. Taya whips her own partner into the corner, displaying incredible double team offense. Taya wears Jordynne down with a vicious German suplex, while Tenille doesn’t seem eager to get back into the match. Jordynne hits Taya with a big Spinebuster but Tenille makes the blind tag, potentially costing her team the match!

Tenille connects with her signature low crossbody on Taya for two. Taya hits Jordynne with a powerful spear. Jordynne looks to make the tag but Tenille drops from the apron. Rosemary scores the victory with a double underhook to Jordynne.

Cody Deaner is still furious at the fact that he lost to Johnny Swinger recently on IMPACT! Cousin Jake apologizes for dropping the ball in their tag match. Cody says the stress is getting to him because he’s a suspect in the shooting of John E Bravo. Jake has a plan that’s going to redeem the Deaner name – at the cost of Johnny Swinger.

Former friends turned enemies go to war here tonight after Myers called Swoggle a sideshow attraction, not a professional wrestler. Myers wants him to lay down for the three count but Swoggle declines and goes on the attack! Swoggle dives through the bottom rope with a big dive to the outside. The fight spills to the outside as Swoggle sends Myers head-first into the steel ring steps. Myers picks the ankle on the apron, allowing him to gain control. Myers taunts his opponent before hitting him with a big boot for two. In an incredible feat of strength, Swoggle connects with a massive German suplex!

Swoggle bites Myers leg, followed by the Tadpole Splash for a near fall. Myers puts Swoggle away with his signature clothesline for three.

After the match, Myers continues the attack on Swoggle until Crazzy Steve makes the save!

Two of the most decorated tag team wrestlers in professional wrestling history, Chris Sabin and James Storm team up with each other for the first time tonight. Sabin shoulder tackles Larry in the middle of the ring but can’t get the big man off his feet. Instead, Sabin outsmarts him with a dropkick to the legs. Storm trips up Larry from the outside and sends him into a kick from Sabin. Acey gains control with a ring-rattling dropkick of his own to Sabin. Larry hits Sabin with a sit-out style suplex but Storm breaks the pin attempt. Acey sits on the back of Sabin as XXXL begins to wear him down. Acey distracts the referee, allowing Larry to illegally attack Sabin on the outside. Sabin finally breaks free and makes the tag to Storm who unloads on Larry D. Storm hits a neckbreaker for two. Sabin launches himself off the top, taking out Romero with a crossbody. Sabin and Storm salute the fans at home but Larry is still alive.

Acey connects with a senton on Sabin for a very close near fall. XXXL collide with each other, allowing Sabin and Storm to capitalize with tandem offense on Acey to win.

The Deaners make a shocking discovery as they find a gun in the fanny pack of Johnny Swinger. Could he be the one who shot John E Bravo?

Cousin Jake answers Rohit Raju’s open challenge for a shot at the X-Division Championship. After what he just discovered, will he able to focus on the task at hand? Jake hits a big splash in the corner, followed by a strong fist. Rohit hangs up Jake on the ropes, followed by a series of kicks to gain the advantage. Rohit hits a double foot stomp to the back of Jake.

Rohit remains in control with a swinging neckbreaker. Jake counters a tilt-a-whirl DDT attempt into some innovative offense for a near fall. A new X-Division is almost crowned when Jake hits a thunderous sitdown powerbomb but Rohit kicks out. Jake goes for a Superplex but Rohit targets the throat of Jake to send him crashing to the mat! Rohit hits two flying knees to retain the X-Division Title.

After the match, Eric Young alongside All Japan Pro Wrestling Triple Crown Champion Joe Doering lay out the Deaners with a vicious assault! What’s Joe Doering doing in IMPACT Wrestling and why has he aligned himself with the World Class Maniac?

Gia Miller catches up with The Good Brothers before they challenge The North for the Tag Team Championships later tonight. They say that they’ve been tag team champions all over the world but never in IMPACT Wrestling. Tonight, they aim to change that.

This match came about after Willie Mack came to the aid of his friend Rich Swann when Moose confronted him over his who was the more prestigious champion in IMPACT Wrestling. Willie looks to fly off the apron but Moose takes out his leg and begins his beatdown. Moose calls out Rich Swann as he steps on Willie’s head at ringside. Moose continues his onslaught as he rakes Willie’s face, then connects with a big dropkick. Moose hits a strong Irish whip into the corner, followed by a running back elbow. Wille finally shows some signs of life with a flurry of fast-paced offense but Moose quickly shuts him down with a Spinebuster. Moose continues to talk trash about Rich Swann and Willie has heard enough.

Willie hits a leg drop for two. Moose connects with a Superplex of gigantic proportions! Moose counters a Stunner into the Spear, then pummels Willie with repeated strikes to win by referee stoppage.

After the match, Moose continues his beatdown on Willie, forcing the referee to reverse his decision, awarding the victory to Willie Mack by disqualification!

Rich Swann congratulates Eddie Edwards on his victory over Daivari earlier tonight. Eddie tells him that if Ken Shamrock gets involved in his World Title match vs Sami Callihan tonight, he will have his back.

Tag Team Championship
The North (c) vs. The Good Brothers

Who will leave Turning Point with the Tag Titles around their waists in this highly-anticipated championship clash? Page goads Gallows into getting illegally involved but all that does is provide a distraction so that he and Alexander can deliver a rule-breaking assault of their own! The North wear down Anderson, cutting off the ring and preventing him from making the tag to Gallows.

The beatdown continues as The North connect with a double team swinging slam for two. Anderson finally creates separation with an explosive neckbreaker, allowing to make the tag to Gallows. Meanhwhile, Page tags in Alexander and the pace quickens! The match begins to break down as Page pulls Anderson off the apron. The Good Brothers turn the tide with a back suplex neckbreaker combo to Alexander. Page thwarts the follow up Magic Killer attempt. Anderson takes out Alexander with the Gun Stun. The Good Brothers hit Page with the Magic Killer to become the new Tag Team Champions!

Jordynne Grace is furious at Tenille Dashwood for leaving her hanging in their tag team match earlier tonight. Alisha Edwards, who also had an unsuccessful attempt teaming with Jordynne, sides with Tenille and they agree to enter the Knockouts Tag Title Tournament this Tuesday!

After Su Yung eliminated Kimber Lee last week on IMPACT!, Deonna Purrazzo will have to go it alone in her Knockouts Championship rematch! Deonna charges at Su during her entrance but Su pulls down the top rope, sending her crashing to the outside. Su brings out the bloody glove early, connecting with a strong palm strike. Deonna gains control with a single-arm DDT. Deonna ties up Su on the bottom rope with the Paradise Lock, then kicks her to the floor. Deonna litters the ring with weapons and there’s nothing the referee can do about it! Su swings and misses with the kendo stick, allowing Deonna to connect with a side Russian legsweep. Su finds a rope underneath the ring and begins to choke her. Deonna charges into the corner and collides with a steel chair that she set up earlier! The fight spills up the ramp to the stage, where Su connects with a powerful pedigree!

Deonna blocks Su’s red mist with a piece of canvas, then hits her over the head with it! Deonna locks in Venus de Milo with Su’s head trapped in a steel chair. Su passes out due to the pain but as the referee checks on her, she shows signs of life! Su locks in the Mandible Claw then attempts to choke her with the rope once again. Deonna turns the tide and tosses her off the top, then connects with the Cosa Nostra piledriver to win!

This personal rivalry continues with the World Title on the line tonight at Turning Point! Callihan bends the rules in the early stages of the match, sending Swann into the steel steps and ring post. Swann somersaults off the apron, colliding with Callihan on the floor. Swann tweaks his knee, giving Callihan an opening as he begins to target the previously-injured area. Callihan wears down Swann and takes total control. Swann has a burst of momentum as he exchanges strikes with Callihan, and both men are out! Swann gains the upperhand with a roundhouse kick, followed by Rolling Thunder for two. Callihan fights backs with a buckle bomb, followed by a brainbuster for a very close near fall. Swann hits a modified standing Moonsault for a near fall of his own. Callihan counters Sliced Bread into a Tombstone Piledriver but somehow, Swann kicks out! Callihan delivers a sickening Piledriver on the apron but it seemingly has no effect on Swann as he comes right back with a handspring cutter!

Both men make it back into the ring before the count of 10. Ken Shamrock comes down to ringside but Eddie Edwards fights him off! Meanwhile, Swann puts Callihan away with multiple superkicks to retain the World Title!